Among Rumored Vice Presidential Candidates, Warren Would Give Biden the Biggest Boost

Electorate is split on the Massachusetts senator, but she would help Biden with minorities, voters under 45 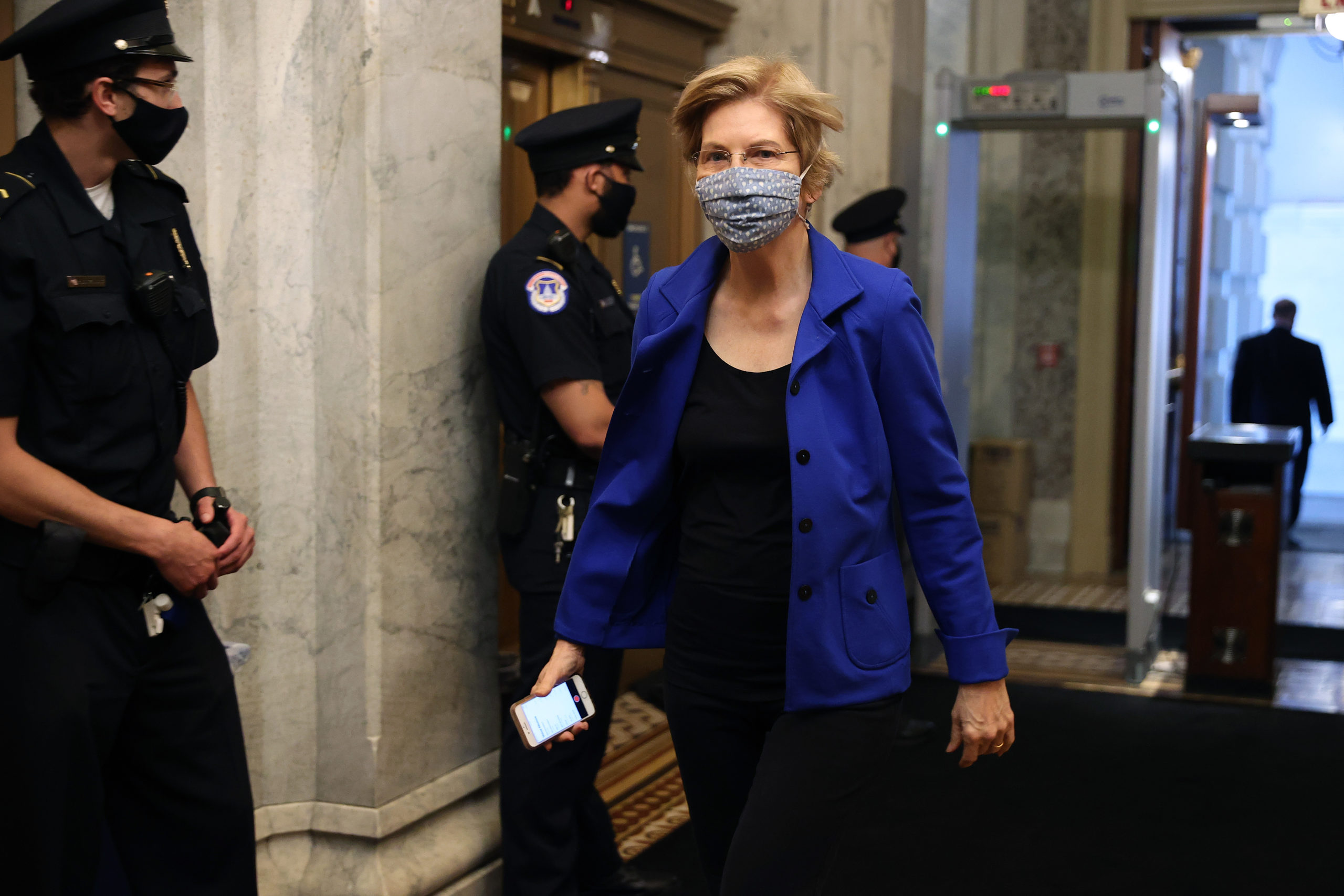 A masked Sen. Elizabeth Warren arrives at the Capitol for a May 18 vote. According to a new poll, the Massachusetts Democrat's addition to her party's 2020 presidential ticket would have the best electoral impact for Joe Biden, the presumptive Democratic nominee. (Chip Somodevilla/Getty Images)
By Eli Yokley

For progressives who may still be irked by former Vice President Joe Biden’s status as the Democratic Party’s presumptive nominee, American voters may have an answer.

A new Morning Consult/Politico poll gauging the potential impact of Biden’s choice of a running mate found that among nine women reportedly in the mix, Sen. Elizabeth Warren (D-Mass.) would have the biggest net positive impact on his candidacy against President Donald Trump in November.

According to the May 22-26 survey, 26 percent of registered voters said placing her on the ticket would make them more likely to vote for Biden, while 23 percent said it would make them less likely to back him. Her positive impact on Biden increased among voters under the age of 45, who view Warren in a more favorable light than they do Biden, as well as black and Hispanic voters.

Warren, who is more popular than Biden with liberal voters, dropped her own campaign for the Democratic presidential nomination after Super Tuesday in March, and she endorsed Biden’s candidacy in April as part of a show of unity during the same week former President Barack Obama and Sen. Bernie Sanders (I-Vt.) backed his bid.

Since then, she joined Biden in penning an op-ed in the McClatchy newspapers in May and is slated to join Biden at a virtual fundraiser with high-paying donors on June 15, according to The New York Times. It places her among the women who have been friendly to Biden’s campaign as a panel led by former Sen. Chris Dodd of Connecticut, Rep. Lisa Blunt Rochester of Delaware, Los Angeles Mayor Eric Garcetti and Cynthia Hogan, Biden’s former White House and Senate counsel, work to vet potential running mates by July, Biden has said, “God willing.”

The poll found other high-profile potential picks such as California Sen. Kamala Harris, Minnesota Sen. Amy Klobuchar and Georgia’s Stacey Abrams would have a similarly marginal impact on the overall electorate. However, Harris, who would make 22 percent of the electorate more likely to vote for Biden, roughly matches Warren’s power with key groups such as voters under the age of 45 and voters in America’s suburbs.

Meanwhile, Klobuchar, who would push 19 percent of voters toward the former vice president, outpaces them both among the oldest voters, a group that has trended away from the president since his 2016 victory over Hillary Clinton. Abrams, who would make 16 percent of voters more likely to back Biden, matches Harris’ strength with black voters, who helped fuel Biden’s victories in the primary.

The other names in the survey — Michigan Gov. Gretchen Whitmer, Wisconsin Sen. Tammy Baldwin, Florida Rep. Val Demings, New Mexico Gov. Michelle Lujan Grisham and Nevada Sen. Catherine Cortez Masto — would start out as a net negative for Biden, though this likely reflects the finding that more than 3 in 5 have never heard of or have no opinion about the five women.

The presidential contest, which has taken a back seat to the coronavirus pandemic, is ripe for a jolt, and Democrats believe the announcement of a running mate has the potential to do just that.

The latest Morning Consult poll tracking the race nationally, conducted May 18-24 among 30,317 registered voters, found Biden leads Trump, 46 percent to 41 percent, unchanged since the previous week. The tracking poll has a 1-point margin of error.

At 45 percent, the former vice president is statistically tied with Trump among voters ages 45 and older and leads the president 47 percent to 34 percent among those under 45.

Biden has a 23-point lead over Trump among Hispanic voters (53 percent to 29 percent), and his standing among black voters — ahead 76 percent to 9 percent — went statistically unchanged amid a May 22 dustup with Charlamagne tha God, a black radio host whom he told, “If you have a problem figuring out whether you’re for me or Trump, then you ain’t black.” Biden later apologized for the remark.