Fans have always been the soundtrack of sports, but restrictions surrounding the coronavirus pandemic have pressed the mute button on the audio we’ve become accustomed to: The roar of a crowd rising to its feet as a game-winning goal is scored; the collective silence as a last-second jump shot hangs in the air; even the vitriol directed at a referee who makes a questionable call.

So what should sports sound like when there are no fans on site to witness these moments?

Soccer fans who have caught recent Bundesliga action on Fox Sports 1 or Fox Deportes have gotten a taste of what could become the “new normal” in sports broadcasting, at least for the foreseeable future. With German soccer clubs unable to host fans due to COVID-19, the league has begun offering its broadcast partners canned crowd noise, offering Fox a soft launch vehicle for integrating artificial cheering into live sports telecasts to compensate for the lack of a real crowd. 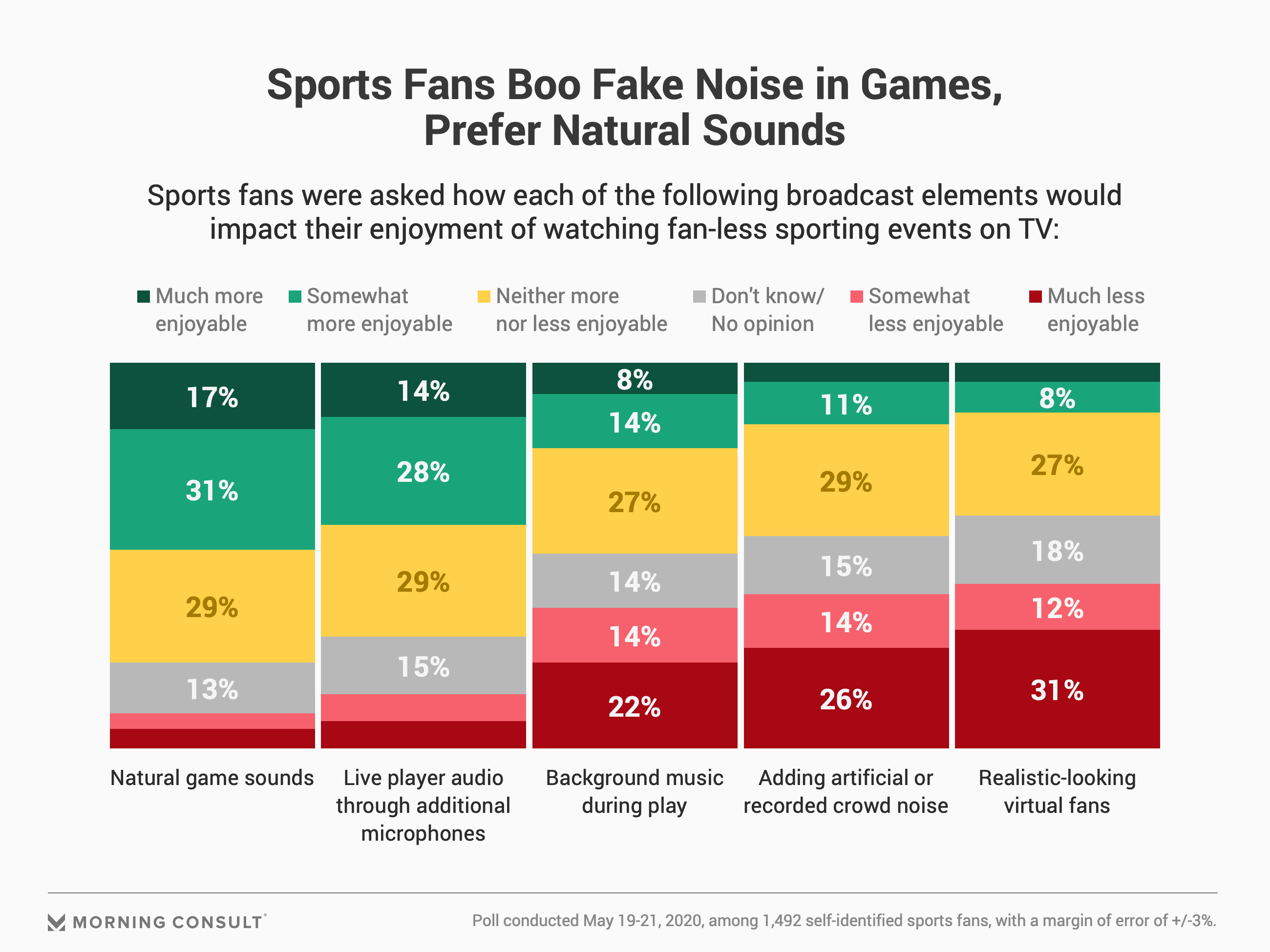 Forty percent of self-identified sports fans believe artificial crowd noise would make the experience of watching live sports from an empty stadium on television less enjoyable, according to a Morning Consult poll. By contrast, just 16 percent of fans said they believe the addition of canned cheering would make the telecasts more enjoyable.

Fortunately for broadcasters and sports properties, these attitudes might not translate into action: Fifty-nine percent of sports fans who offered an opinion on the question said they are just as likely to watch games without crowds as they would be to watch events with fans in attendance, even though 48 percent of fans believe watching sporting events without fans will be less enjoyable. 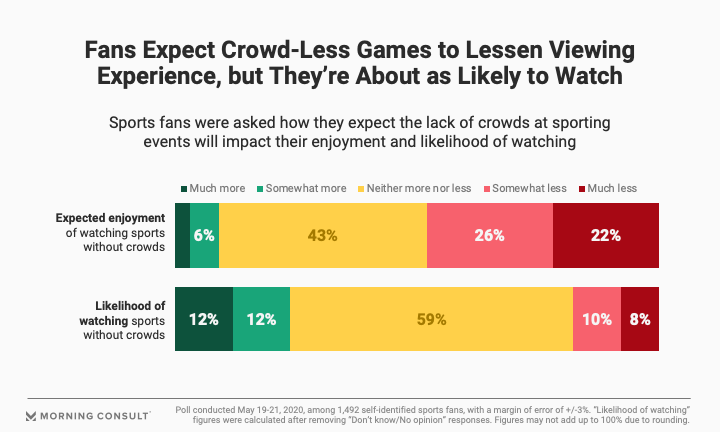 Like Fox Sports, ESPN has also experimented with artificial crowd noise on its telecasts of Korean baseball. Mark Gross, senior vice president of production and remote events at ESPN, said that while he did not anticipate being a proponent of adding in crowd noise, he quickly decided that having it at a low level is the best option.

“We want things to feel authentic, and I didn’t think having a sort of fake crowd noise would feel authentic,” Gross said. “But I think at the level that it’s at, you can just hear it enough so it doesn’t feel, you know, incredibly hollow inside a 25,000 seat stadium.”

He added, “I don’t think we’ll get to a position where somebody’s at the plate in a Major League Baseball game and he hits a home run and we have somebody bringing the audio up on the crowd noise. I don’t think we’re going in that direction.”

Playing background music, another option to fill the silence during sporting events, polled better than the insertion of artificial crowd noise, but was also fairly unpopular. Thirty-six percent of fans said they believe music would make games on television less enjoyable, while 22 percent said it would make the experience more enjoyable. The NBA is the only one of the major North American sports where in-arena music during live game action is commonplace, something that could potentially make the lack of crowd noise less noticeable. ESPN said it hasn’t considered background music for fanless games in other sports.

One of the most distinguishable aspects of watching a game without fans on site is the audibility of natural sounds inherent to the sport. On the first weekend of Bundesliga soccer, which returned May 16, viewers could hear the previously inaudible “bonk” sound of the soccer ball ricocheting off of a player’s head. On crowd-less UFC telecasts, microphones picked up the sound of every kick or punch landing. 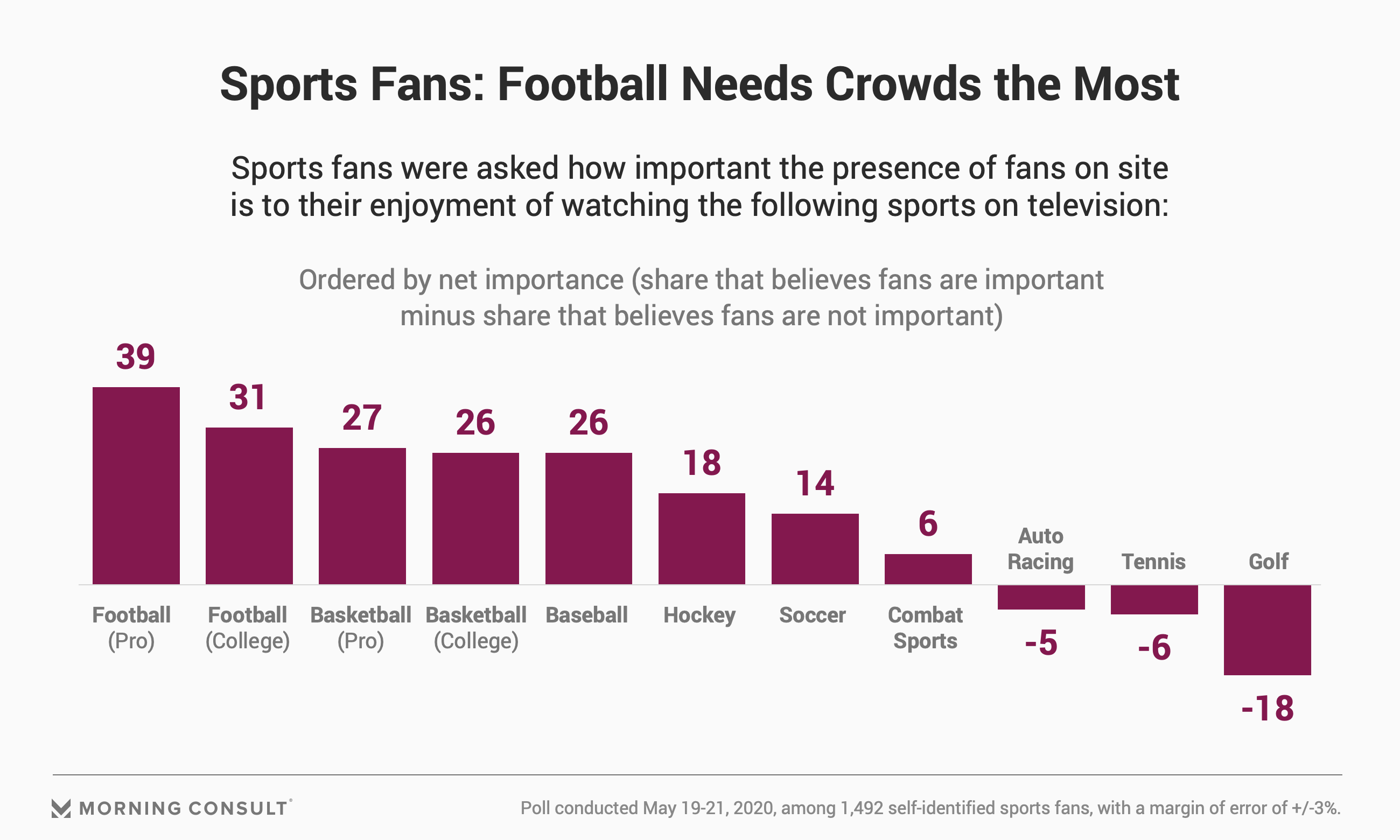 Presented with the reality of crowd-less sports, nearly half (48 percent) of sports fans said being able to more clearly hear the natural sounds of a particular sport — whether it be sneakers squeaking in basketball or a baseball hitting the inside of an infielder’s mitt — would improve their enjoyment of watching sporting events played in empty facilities. Another 42 percent of fans said they would appreciate additional microphones to pick up on what players and coaches are saying during a game, something ESPN carried out earlier this year in its broadcasts of the now-defunct XFL.

Gross said ESPN would like to provide as much access as possible by having players wear microphones during MLB telecasts it hopes take place this summer, but raised some concerns about doing so in a sanitary way given the risk of COVID-19.

As for the jarring visual of empty stadiums, at least one major U.S. network is considering filling the stands with virtual fans, a higher-tech version of the cardboard cutouts featured in recent Taiwanese baseball and German soccer games. A source at Fox Sports confirmed public comments by broadcaster Joe Buck that the network is looking at ways to make it look like fans are in the stands, something that could potentially be rolled out for NFL games.

The survey results show fans are not particularly supportive of such measures, however, with 13 percent in favor of realistic-looking virtual fans and 43 percent in opposition.

Sports marketing consultants have suggested teams and leagues might look to use the empty area where fans would normally sit as space to insert either physical ad signage, perhaps via large branded tarps, or to project digital logos — an attempt to recoup some of the revenue they are missing out on by holding games without fans.

At least several sports organizations are considering the implementation of a more interactive solution: technology that captures fans’ cheering as they watch at home and plays the aggregated audio back on the broadcast in real time. ChampTrax, a Canadian startup that has worked with global sports broadcaster Eleven Sports, took a step toward broader distribution of its technology last week, agreeing to a partnership with India’s Tech Mahindra.

Jagdish Mitra, Tech Mahindra’s chief strategy officer and head of growth, said the company is in discussions with several NFL clubs about potentially implementing the HearMeCheer technology. While he declined to name specific teams, the company has been a partner of the Jacksonville Jaguars since 2018 on fan engagement efforts. Mitra also indicated the company is in talks with several European soccer leagues and some cricket organizations about the technology, which is part of Tech Mahindra’s broader fan engagement business.

Manish Upadhyay, head of the company’s sports technology vertical, said that because most sports facilities are not currently equipped to pump in real-time cheering, the technology will be a broadcast-only feature in its first phase. He said he expects to be working with teams within 6-8 weeks on implementing the technology.

In the Morning Consult poll, about 1 in 3 sports fans said they would be interested in trying a desktop or mobile app that inserts their cheers into a live sports broadcast.

The Morning Consult survey of 1,492 sports fans, conducted May 19-21, carries a margin of error of 3 percentage points.