Senate Majority Leader Mitch McConnell (R-Ky.) speaks to reporters at the Capitol on May 19. The Lincoln Project, a group of Republicans opposed to President Donald Trump's re-election, rolled out a new ad against McConnell on Thursday after targeting other Senate Republicans up for re-election in Arizona, Colorado, Maine and North Carolina. (Drew Angerer/Getty Images)
By Eli Yokley

The Lincoln Project, an anti-Trump super PAC led by current and ex-Republican strategists, has made a splash on cable news with its videos attacking the president. Now it’s turning its attention to Senate Majority Leader Mitch McConnell as part of a series targeting Senate Republicans the group says have enabled the commander in chief.

A new minute-long spot from the Lincoln Project, shared with Morning Consult ahead of its Thursday release, takes aim at the Kentucky Republican’s personal wealth, dubbing him “rich Mitch,” and contrasts his financial standing with negative statistics about the Bluegrass State during his 35 years in Washington.

While the super PAC — whose stated mission is to defeat “Trump and Trumpism at the ballot box” — has previously produced spots aimed at weakening Republican senators viewed as vulnerable in Maine, Colorado, Arizona and North Carolina, McConnell’s race is not on anyone’s list of tossups. And unlike the others before it, the ad does not attempt to directly tie McConnell to Trump, instead only nodding to the president in passing photos alongside the majority leader.

Related: Among Rumored Vice Presidential Candidates, Warren Would Give Biden the Biggest Boost

Reed Galen, an independent political consultant and co-founder of the group, said in an interview that McConnell is a Lincoln Project target due to his status as a Washington power player and leader of the vulnerable incumbents. The ads, Galen said, are part of “the beginning of the story we’re telling about these senators, not the end of it.”

In an email, McConnell campaign spokesperson Kate Cooksey said that “no scam PAC of grifters has ever been less relevant and no group of consultants will be forgotten faster than this group of thieves who bet everything on three days of dishonest ads in Kentucky.”

The Kentucky spot is set to air in the state on broadcast and cable and be promoted online, backed by more than $250,000, according to a Lincoln Project spokesman. It’s a small figure in the state’s 2020 Senate contest, which has already seen more than $12 million in spending, and the group’s total contributions so far are a drop in the bucket in a campaign year where spending nationwide will likely top $6 billion, if 2012 and 2016 are precedent.

But the Lincoln Project has managed to make waves on a relatively small budget.

“Their most obvious success has been leveraging the appetite for this sort of content — and a political press thirsty for this particular narrative — into earned media on the cheap,” said Liam Donovan, a former finance strategist at the National Republican Senatorial Committee, in reference to the Lincoln Project’s broader efforts. He said the group’s messaging could be marginally helpful in discouraging ticket-splitting among Trump skeptics but said “polarization has done the vast majority of that work for them.” 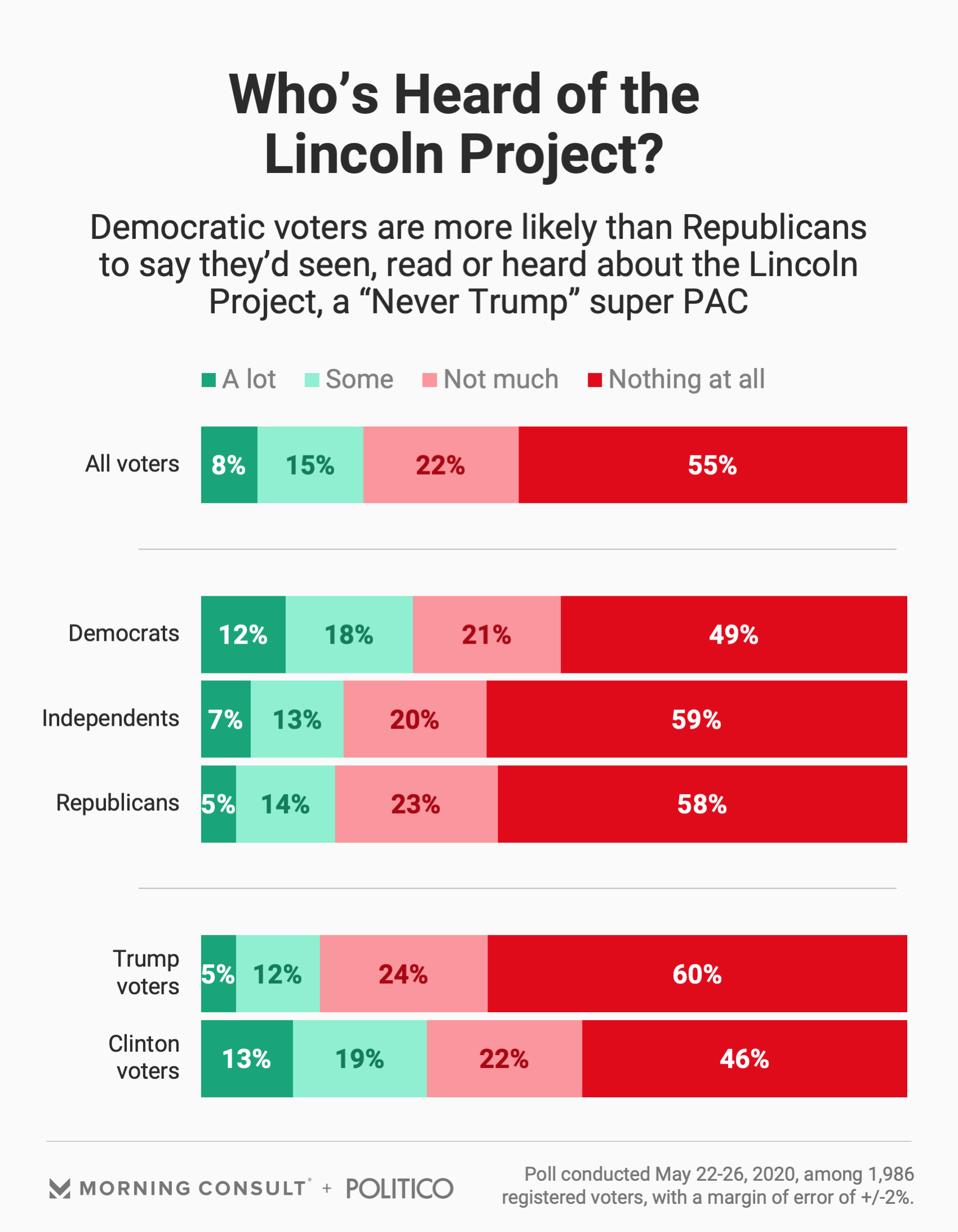 Polling suggests that when it comes to media attention, the Lincoln Project is preaching to the choir. The May 22-26 poll found Democratic voters were more likely than Republicans to say they’d seen, read or heard about the super PAC, 30 percent to 19 percent, and those who backed Hillary Clinton for president in 2016 were more likely than Trump voters to say the same. Overall, 8 percent of voters had heard “a lot” about the group, and another 15 percent had heard “something” about it.

The Lincoln Project’s previous Senate ads have drawn some local attention: Earlier this month, a columnist for the Arizona Republic attributed Sen. Martha McSally’s drop in a head-to-head poll against her Democratic rival, Mark Kelly, to the group’s spending there, and the super PAC made the papers in late December and early January during its first forays into the Senate elections with its impeachment-themed focus on Sens. Cory Gardner of Colorado and Susan Collins of Maine.

But the Lincoln Project has had better luck driving its message with attacks on the president. The group’s “Mourning in America” spot, its most prominent thus far, blamed Trump for economic pain and death from the coronavirus pandemic and caught the president’s attention, garnering angry late-night tweets and then more cable news coverage.

Galen said the spot was part of a modest ad buy with inexpensive production — important for a group that, in March, reported raising $2.6 million since its launch in late 2019. Earlier on, it received backing from big donors such as Walmart heir Christy Walton and Silicon Valley investor Ron Conway, and Galen said the “Mourning in America” uproar led to a surge of more than $1 million in donations and a number of new small donors.

Galen said the “paid piece” — hard money behind advertising campaigns — is only one part of the group’s strategy. As important, he said, is the ability of the group’s prominent advisers — which include conservative lawyer George Conway, the husband of White House senior adviser Kellyanne Conway, as well as Rick Wilson and Steve Schmidt, the Republican strategists-turned-cable news pundits — to “make noise and drive attention” to its messaging from their own digital and television platforms.

“We have utilized the resources we have to punch far above our weight,” he said. “What it’s allowed us to do in the presidential and Senate races is come in with a head of steam from an earned media perspective that helps drive even more attention to the paid dollars we’re putting down on broadcast, cable, digital and whatever the case it might be.”

Scott Jennings, a Republican consultant based in Kentucky, said the Lincoln Project’s strategy mostly relies on the target of attacks taking the bait and elevating the ads on their own, as Trump did this earlier month.

But when it comes to the down-ballot contests, Jennings said, “I don’t think most Senate campaigns will be dumb enough to respond to it.”