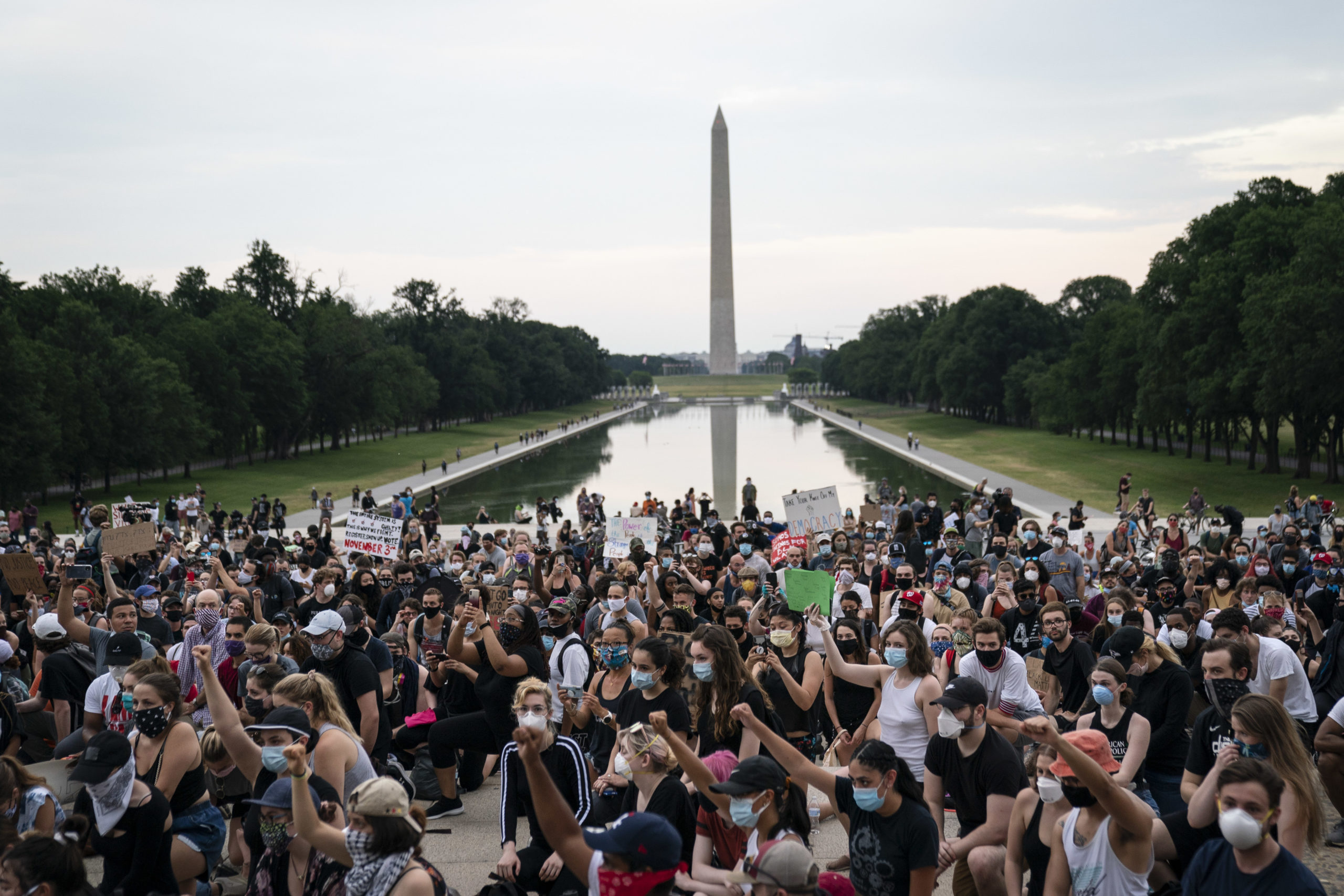 Demonstrators take a knee at the base of the Lincoln Memorial as they peacefully protest against police brutality and the death of George Floyd, on June 4, 2020, in Washington, D.C. (Drew Angerer/Getty Images)
By Cameron Easley

As the White House and the Pentagon clashed over the potential deployment of U.S. troops in cities bubbling with demonstrations protesting the alleged murder of George Floyd by a Minneapolis police officer, a new survey shows falling support for having those cities call in the military to back up their own law enforcement.

In a Morning Consult poll conducted Wednesday into Friday, 42 percent of Americans said they would support the cities’ move to call the U.S. military to supplement city police forces, down 13 points from a survey conducted Sunday into Monday. On the back of an 18-point uptick, nearly half (48 percent) of Americans said they opposed bringing in the military. 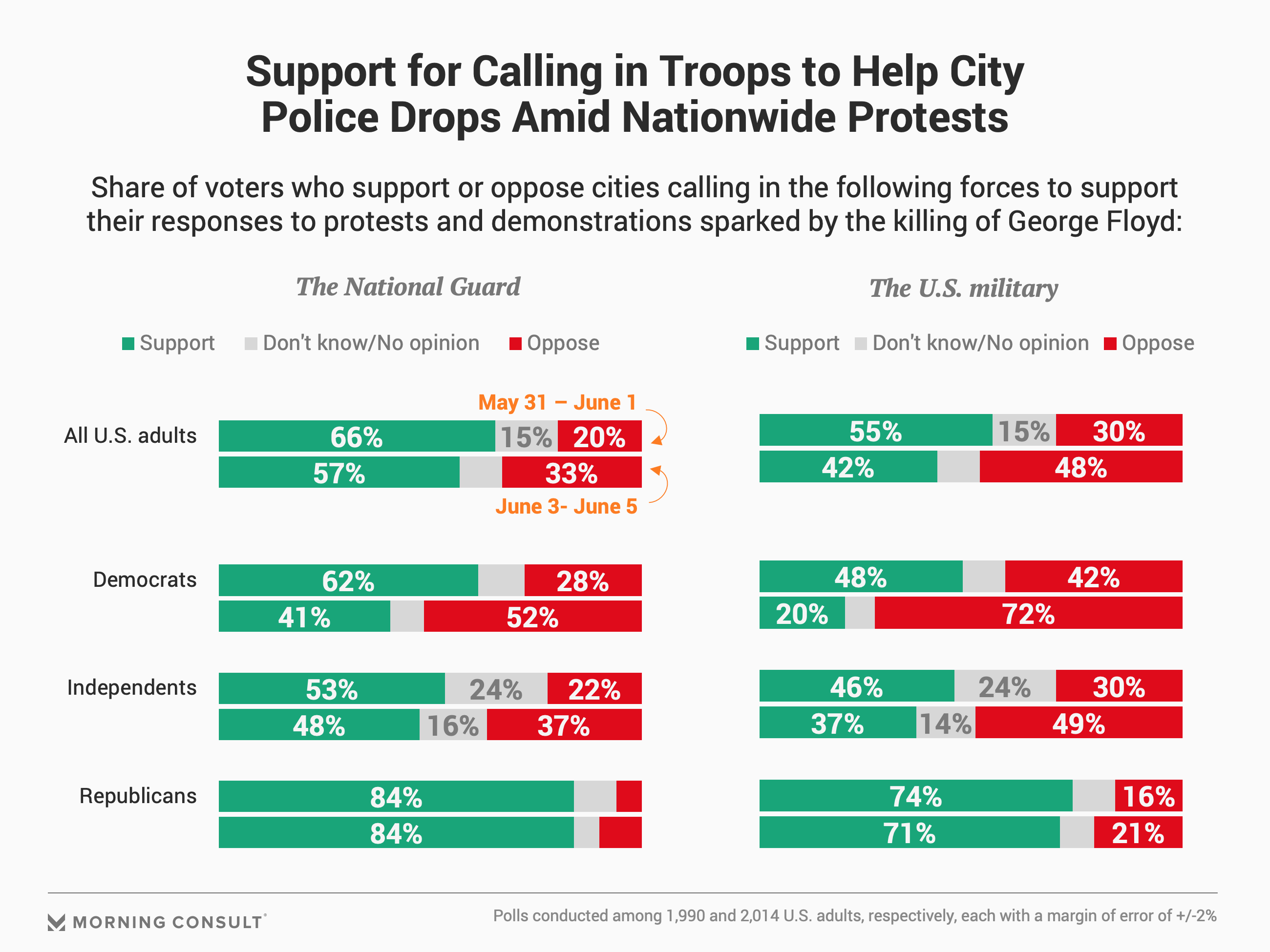 Both surveys were conducted among roughly 2,000 U.S. adults, each with a 2-point margin of error.

The declines in support were mostly fueled by Democrats: The latest poll finds 20 percent would support calling in the military, compared with 48 percent in the poll conducted late last week into early this week. Support among independents also ticked down, from 46 percent to 37 percent. Republican backing held strong, dropping just 3 points, to 71 percent.

The survey was conducted as two military leaders — former Defense Secretary James Mattis and his successor, current Pentagon chief Mark Esper — expressed concerns about using military officers to help enforce the law on U.S. soil. On Wednesday, Esper attempted to send home 1,600 active-duty troops that had been stationed in Washington, D.C., before he was reportedly overruled by President Donald Trump, who was also said to inform governors on a Monday call that they “have to dominate” in order to quell civil unrest in the streets of their cities, and called on them to ask for the National Guard’s help in doing so.

The latest poll measured a 9-point dip in support for having cities call on the National Guard for supplementing local forces, from 66 percent to 57 percent.

While Trump ultimately approved Esper’s order on active-duty troops, on Friday he turned his ire on Muriel Bowser, the D.C. mayor who has called on him to remove troops from the city.

Protests have continued to unfold in cities across the country in recent days, albeit in more peaceful fashion, with less property damage and clashes with authorities as well as fewer arrests. The new poll shows growing support for the demonstrations and those participating. 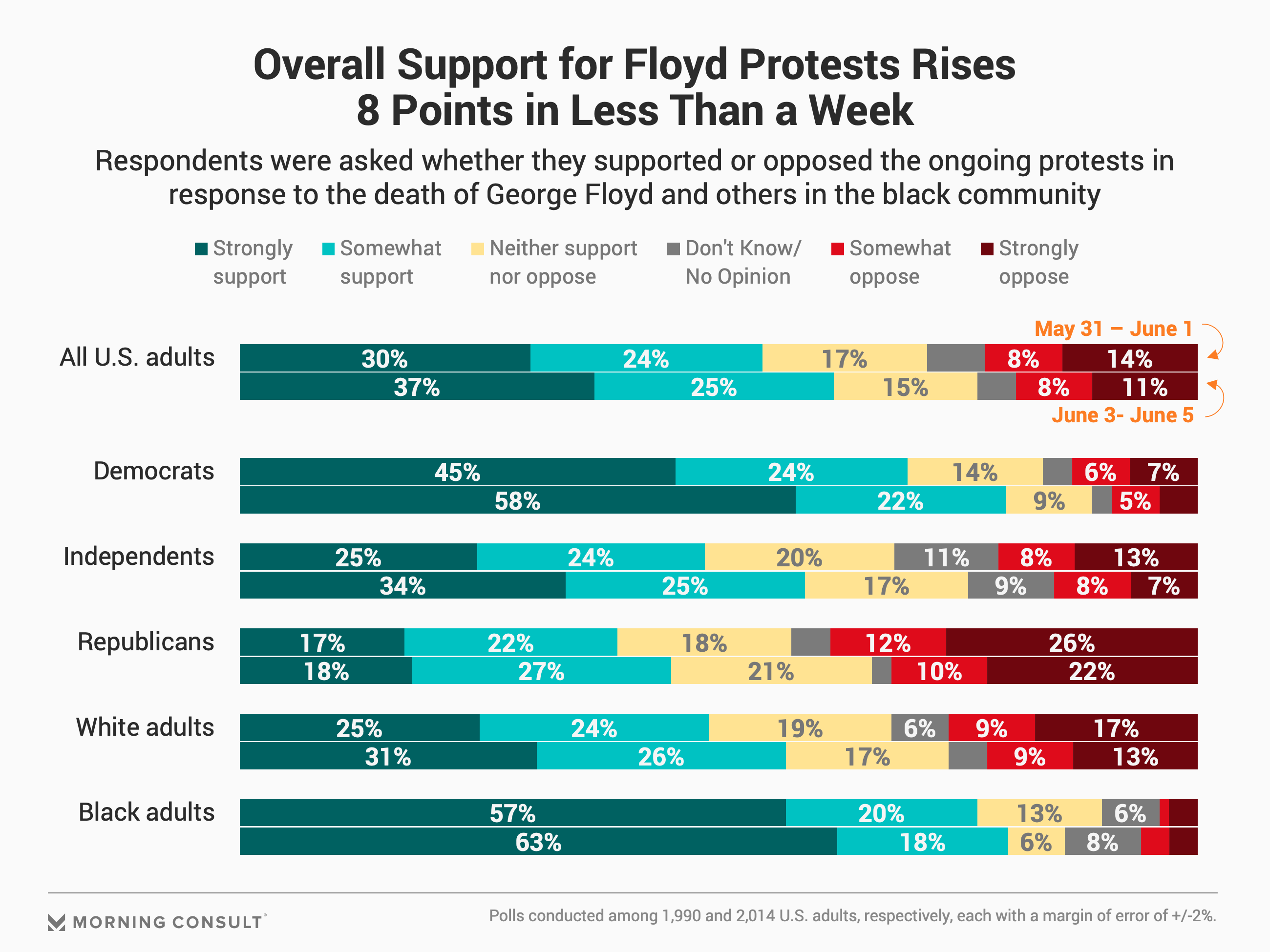 Sixty-two percent of U.S. adults said they support the protests in response to the death of Floyd and others in the black community, up 8 points from the prior survey. Democratic support rose by 11 points while support among independents and Republicans grew by 10 and 6 points, respectively.

And while 44 percent in the May 31-June 1 poll said they back the protesters involved in the demonstrations, 55 percent said the same in the new survey.