Bigger Than The Boardroom: Evolving Expectations of Today’s CEOs

A global pandemic, the rise of stakeholder capitalism and growing demands for business leaders to take a more committed, proactive and public stance on important social issues such as racial injustice have converged to fundamentally transform the chief executive role, writes Morning Consult’s Victoria Sakal.

Now more than ever, consumers, investors and public opinion leaders are paying close attention to how corporate leaders are navigating today’s top issues. In early March, the COVID-19 pandemic forced CEOs to take on the role of Crisis Executive Officer as they led their companies, consumers and especially their employees through unprecedented times. More recently, they are being asked to authentically lead with purpose as the country reckons with systemic racial inequality.

To help organizations better understand the role their leaders should play, Morning Consult surveyed over 11,000 consumers, financial decision-makers, high net worth individuals, politically engaged audiences and key opinion leaders in May and June on what they expect from CEOs today and how that is evolving as new challenges emerge at a rapid pace. This unparalleled research provides actionable insight into the most important drivers of CEO reputation and job performance, how executive perceptions translate to tangible brand and business growth, and how COVID-19 and the Black Lives Matter movement are changing the expectations and expanding the responsibilities of key decision-makers.

The power of purpose in CEO performance

CEOs are in the spotlight today more than ever, and the events of recent months and weeks have only accelerated the evolution of a CEO’s remit. While public trust, fairness, integrity, credibility and being a role model are to be expected as table stakes for a successful CEO and subsequently critical drivers of executive reputation and performance, Morning Consult’s latest CEO Brand Intel research reveals that the top driver is a CEO’s positive contribution to society. In fact, five of the top 10 drivers indicate that CEO responsibilities are rapidly expanding to include the well-being of not only customers, but also society and the world more broadly. 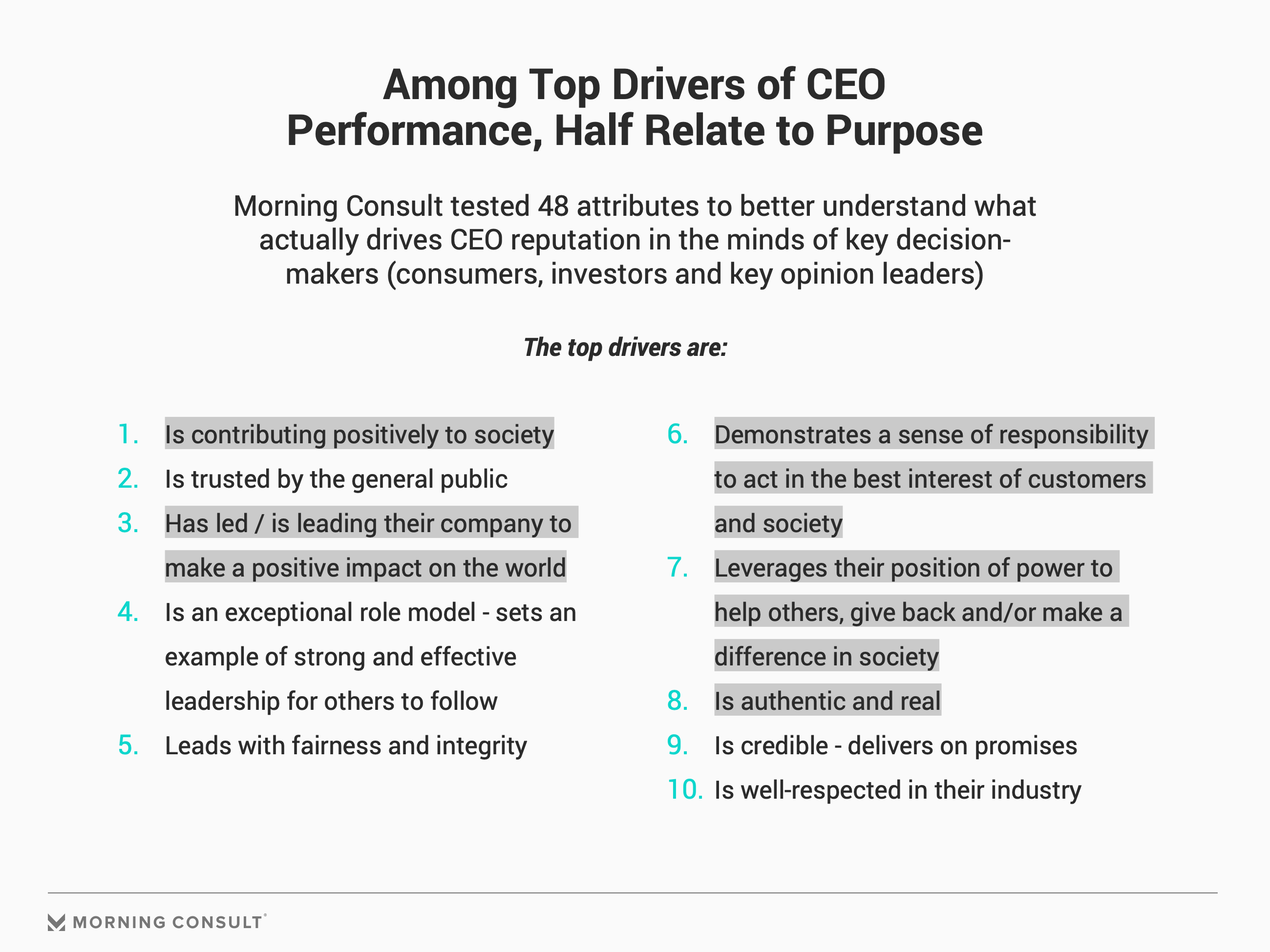 This expanded remit is commonly summarized as “purpose,” which is oft-invoked by companies but skeptically regarded by consumers and involves communicating commitment to higher-order issues but tends to lack tangibility. But it’s clearer than ever that broad sweeping statements and clever taglines are no longer acceptable. Action, authenticity, and ultimately meaningful impact matter more than ever — to not only consumers, but also investors, politically engaged audiences and key opinion leaders, and for fueling not only CEO favorability, but also future purchases, brand growth and business performance.

Stakeholder capitalism is here to stay

A significant milestone in the evolving remit of executives was the Business Roundtable’s 2019 statement on the purpose of a corporation. It committed signing organizations to lead their companies for the benefit of all stakeholders – customers, employees, suppliers and communities as well as shareholders – but was met with mixed reviews. While many applauded the statement’s virtuous ambitious, others doubted its veracity and potential given business leaders’ other priorities (namely shareholders) and lack of details around accountability. Without either some form of governance that pushed companies to act for the greater good, or pressure from key audiences who vote with their dollars pulling companies in a new direction, a meaningful shift in priorities was unlikely.

But in 2020, those key audiences — whether consumers driving business value through their purchases or investors driving business value in other ways — want companies to prioritize the needs of employees and customers. Among all U.S. adults, 50 percent say CEOs should prioritize the needs of their employees first, with 32 percent saying customers should be executives’ top priority. This compares to 8 percent who said shareholders should come first. Investors hold a similar view: Though slightly more (17 percent) say that shareholders should be CEOs’ top priority, 44 percent and 33 percent, respectively, want execs to put company employees and customers first. 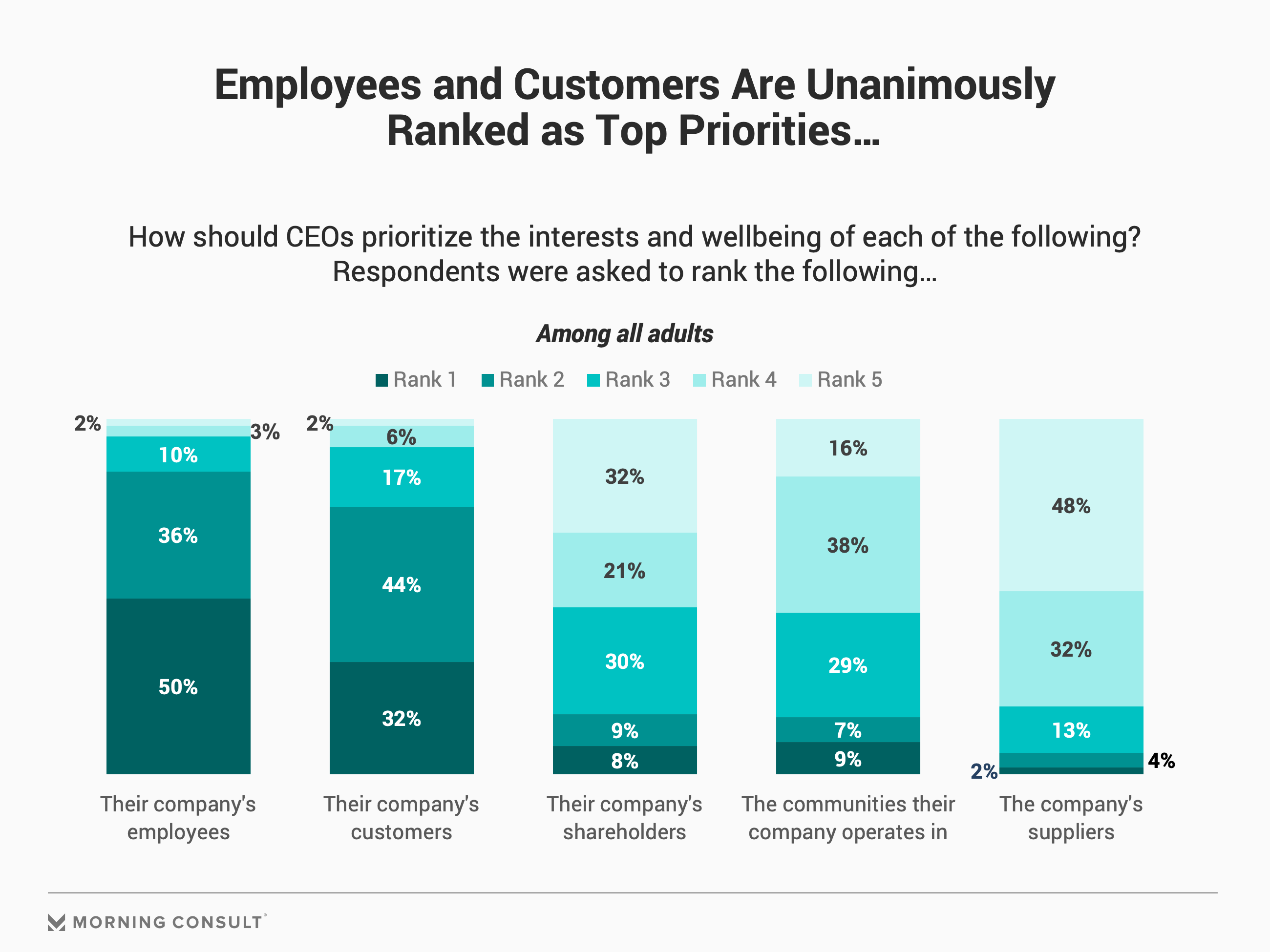 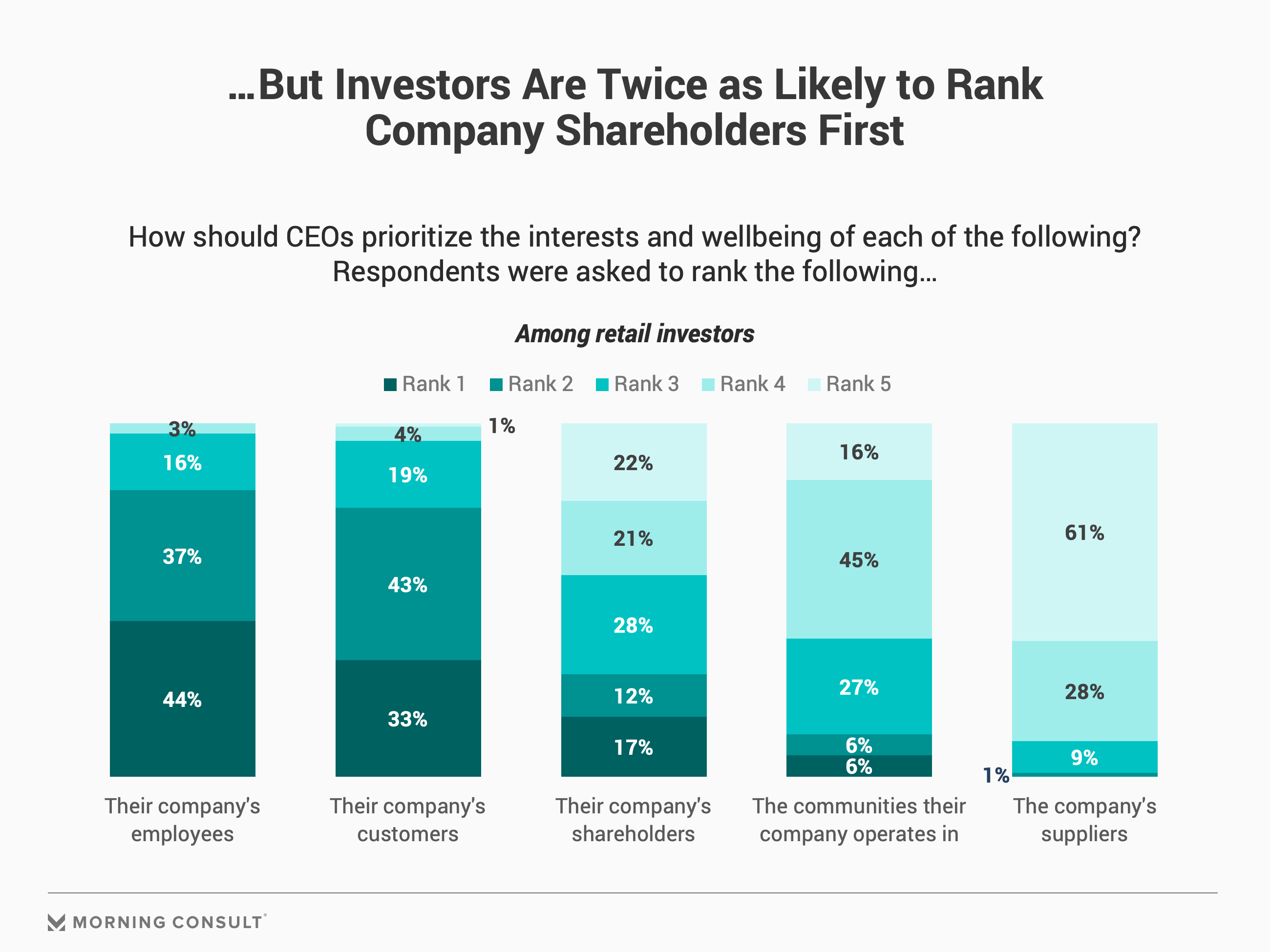 This trend was surely accelerated by recent events, but it has been strengthening since late 2019, when the importance of employees began gaining precedence while that of shareholders began waning. 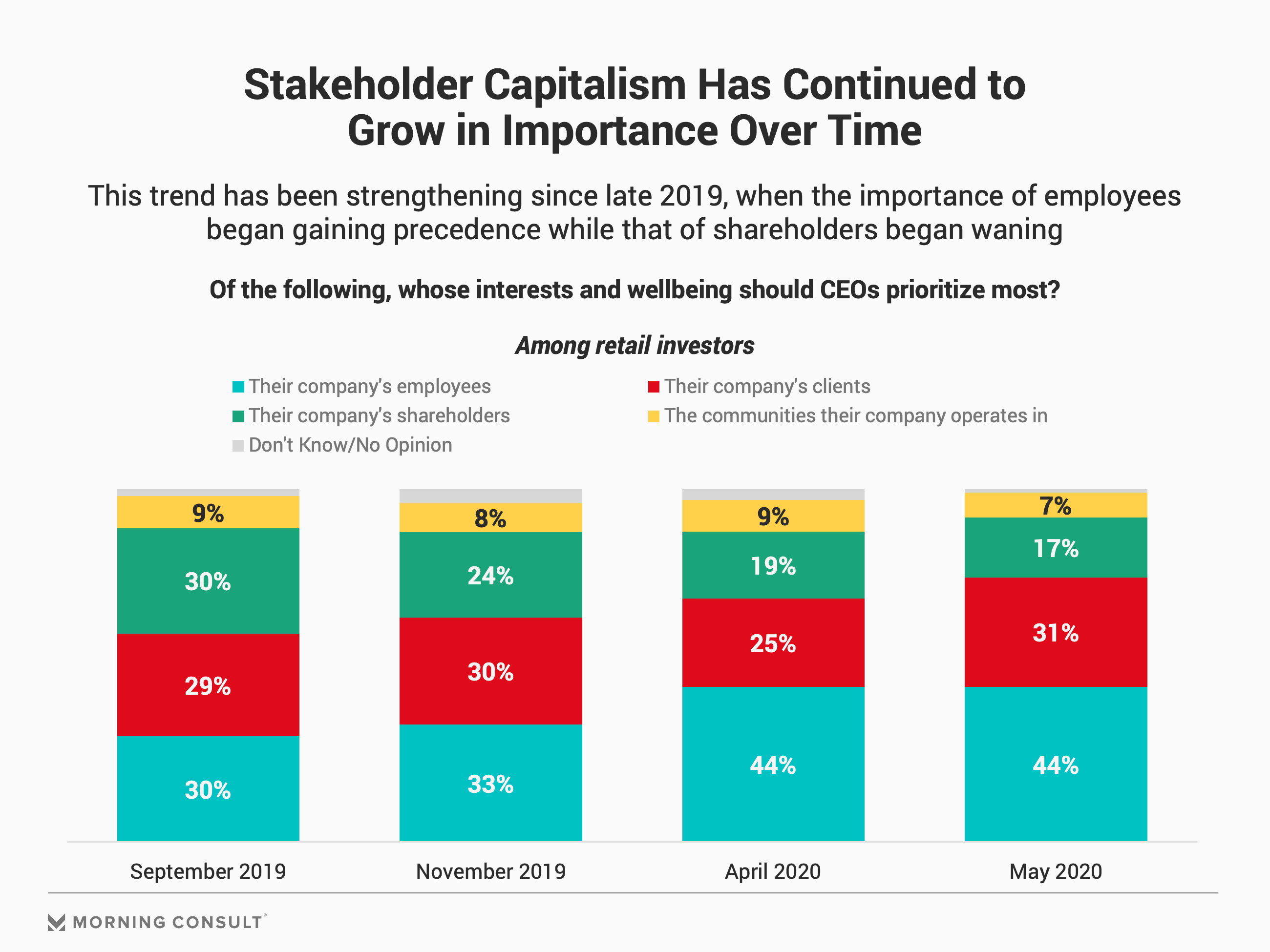 The imperative is clear: Key decision-makers are increasingly demanding that CEOs prioritize the needs of these often-overlooked stakeholder groups, and related qualities including “is leading their company to make a positive impact on the world” and “demonstrating a sense of responsibility to act in the best interest of customers and society” are among the top drivers of a CEO’s performance and reputation.

Given the strong relationship our analysis confirms between a CEO’s performance and their company’s brand strength, and knowing the consequential role brand plays in driving business value, embracing stakeholder capitalism is not just about platitudes or popularity, it’s also about very real profit potential. It’s now time for promises of the past to become practices of the future.

The harrowing death of George Floyd reignited conversations around systemic racial inequality, and in doing so renewed global support for the Black Lives Matter movement. How CEOs and companies react today to this critical moment could have long-term effects on consumers’ buying decisions, investors’ financial interest and even broader business viability.

Americans hold executives responsible for not only setting an example around diversity and inclusivity within their organizations, but also for nurturing this culture in America more broadly: 70 percent say CEOs are responsible for fighting racism and discrimination in America, but only 33 percent say companies and their leaders have been effective at reducing and helping to combat racial inequality. 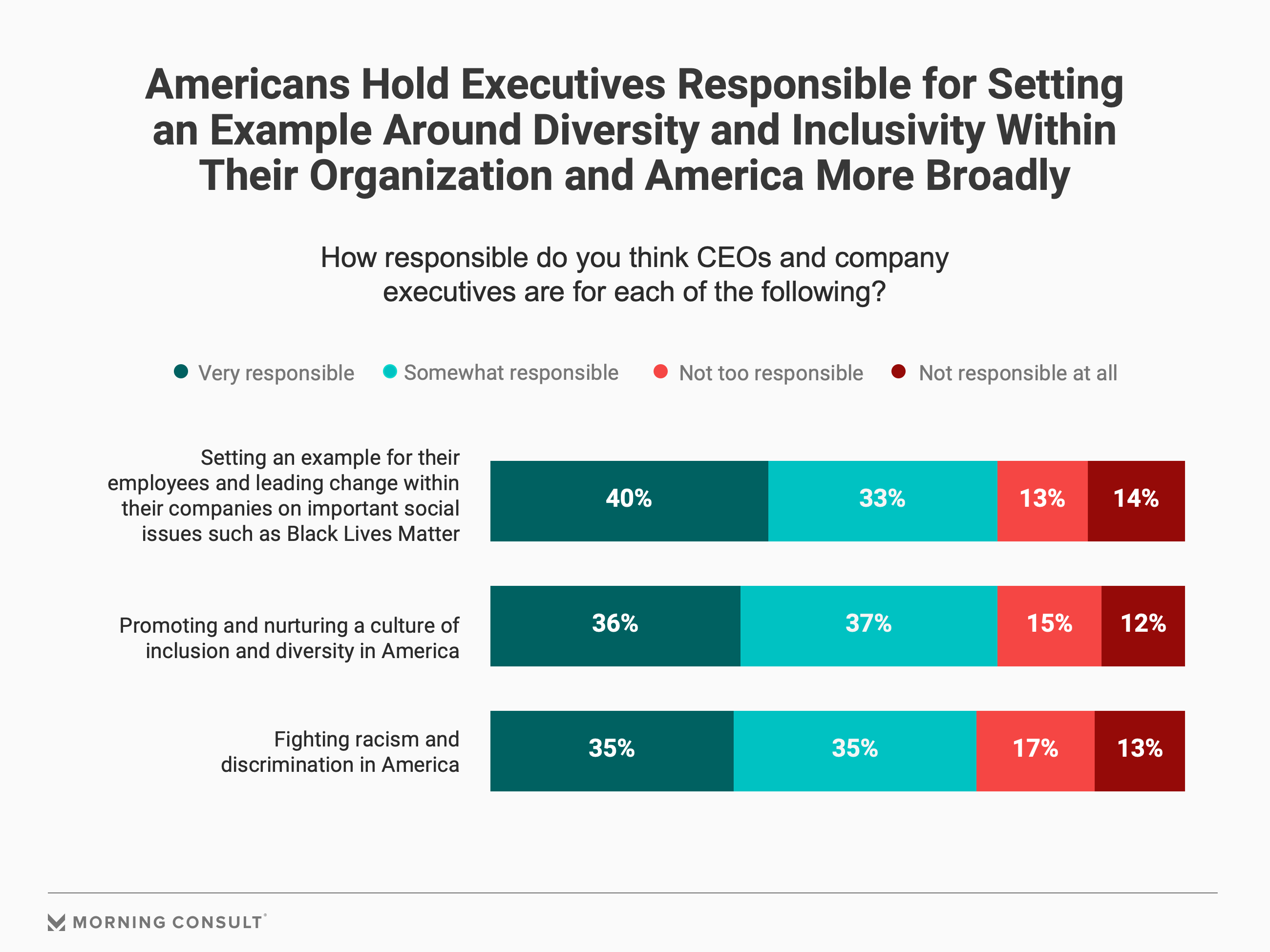 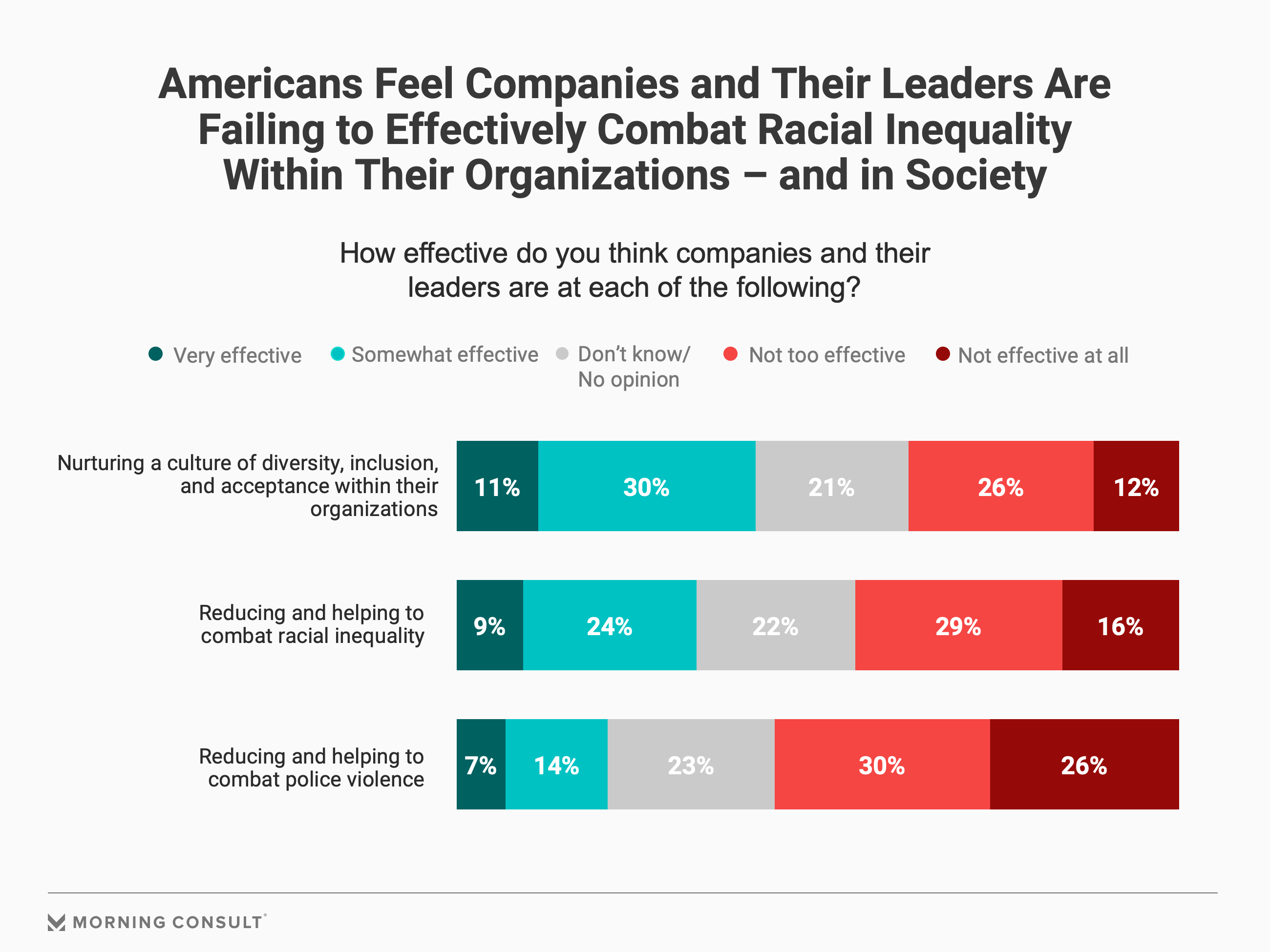 In addition, 68 percent of Americans say it’s important for business leaders to address racial inequality in the United States, and 66 percent of adults expect every company, regardless of their industry or location, to have a point of view on or make a statement about Black Lives Matter. Further, Americans across generations and regions as well as high-income and high-influence audiences say corporate responses to recent Black Lives Matter protests will influence their future favorability for executives and companies alike — and will permanently affect their decision to buy from companies in the future. 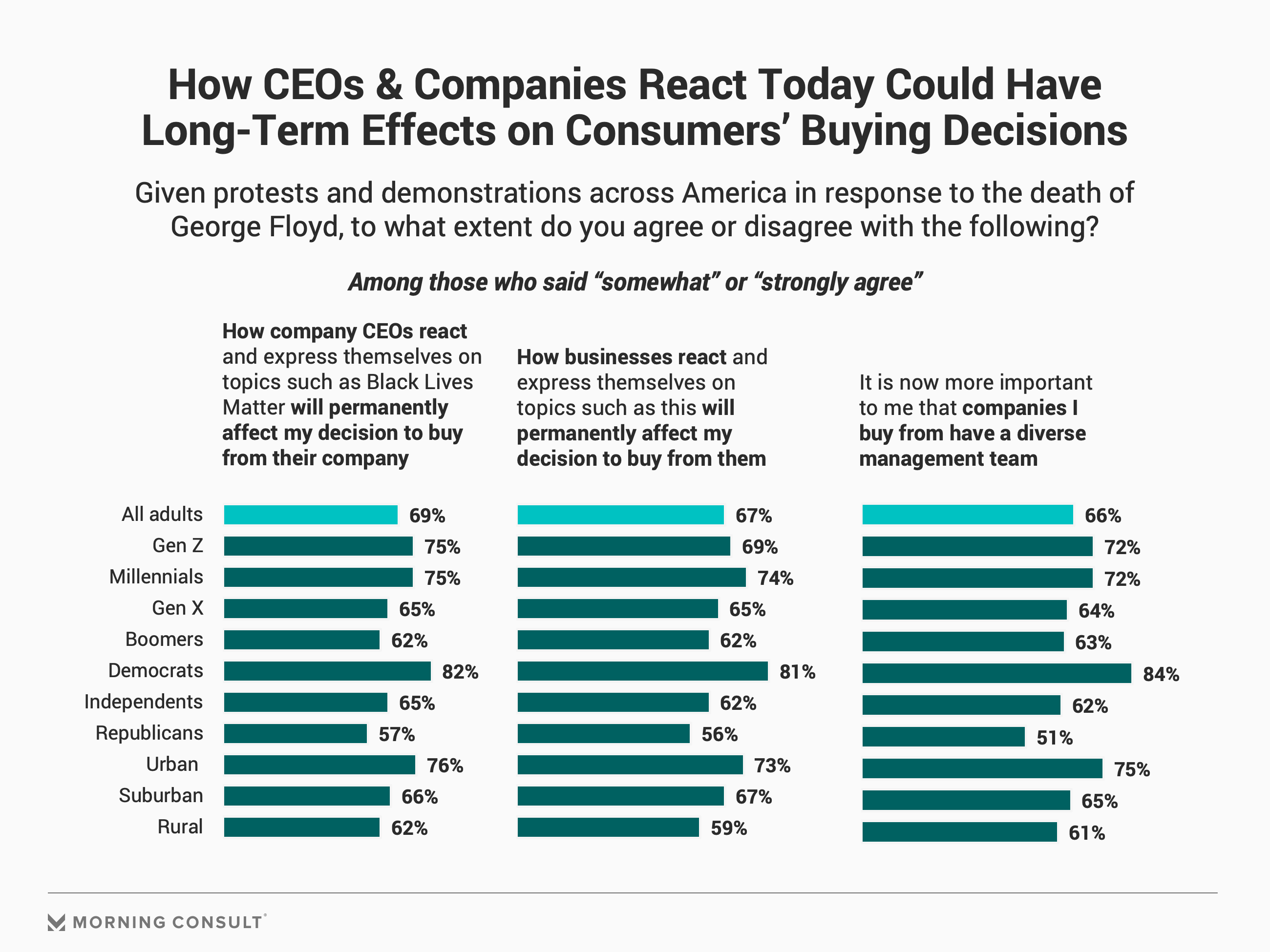 With nearly three quarters (71 percent) finding it appropriate for CEOs to deliver statements about recent protests, it’s clear that Americans want to hear from executives on critically important social issues such as Black Lives Matter. But it’s also important to note for 83 percent, while they appreciate CEOs’ public statements about important social issues like Black Lives Matter, CEO actions will ultimately speak louder than their words. Certain actions would be particularly impactful, though generally following up any commitments with concrete action plans are well-received by the majority of Americans. 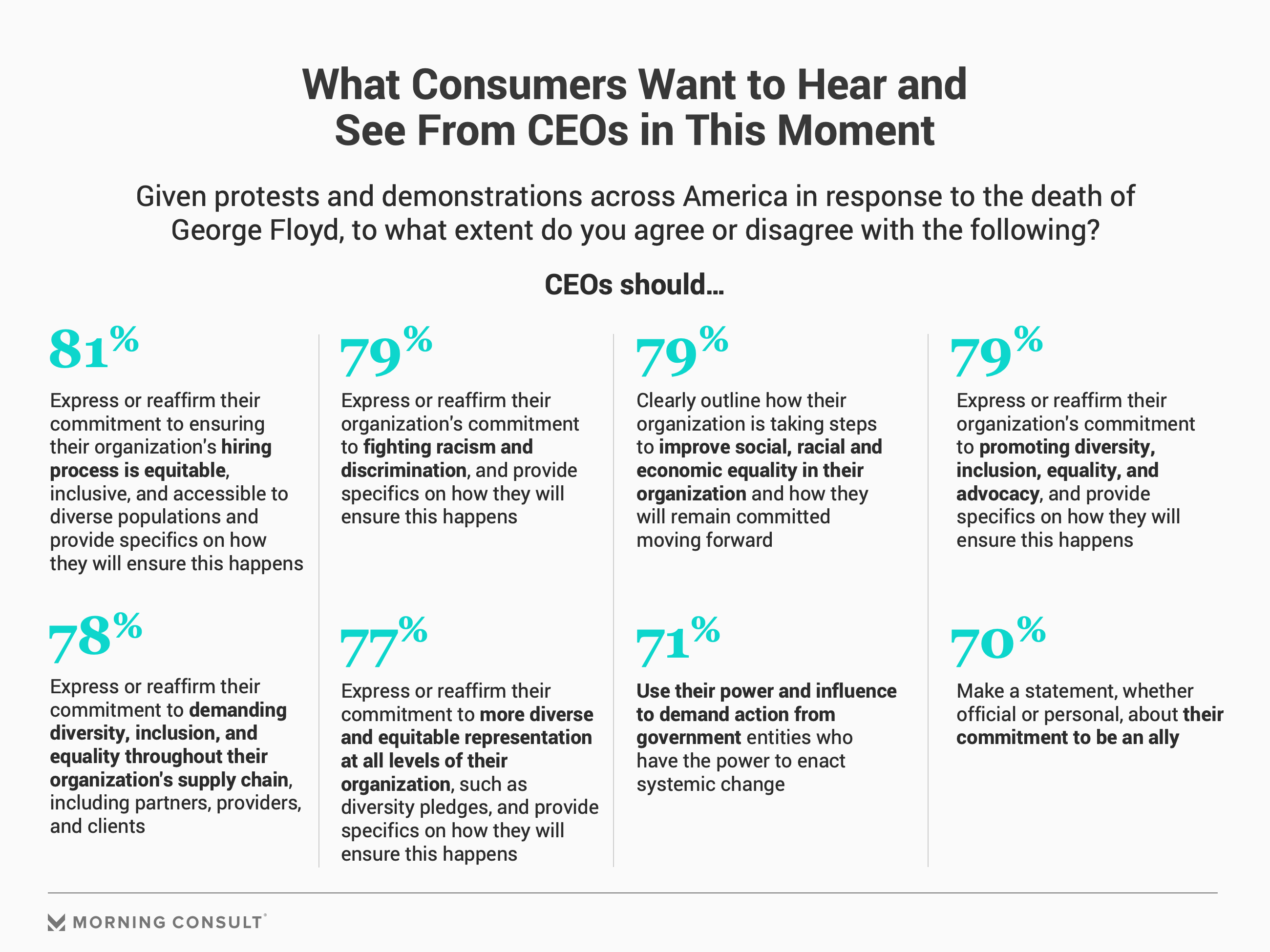 Stakeholder capitalism in action: the criticality of the COVID-19 moment

Despite early signs of recovery in the United States, the scope and severity of the coronavirus outbreak has disrupted homes, communities and businesses since mid-March. Though Americans aren’t blaming corporate America for this reality, a significant portion of the population nonetheless expects it — and CEOs specifically — to rise to the challenge and lead the country through this crisis. But while 71 percent of adults consider CEOs at least somewhat responsible for helping Americans at this time, only 11 percent say they’re doing an excellent job at it. 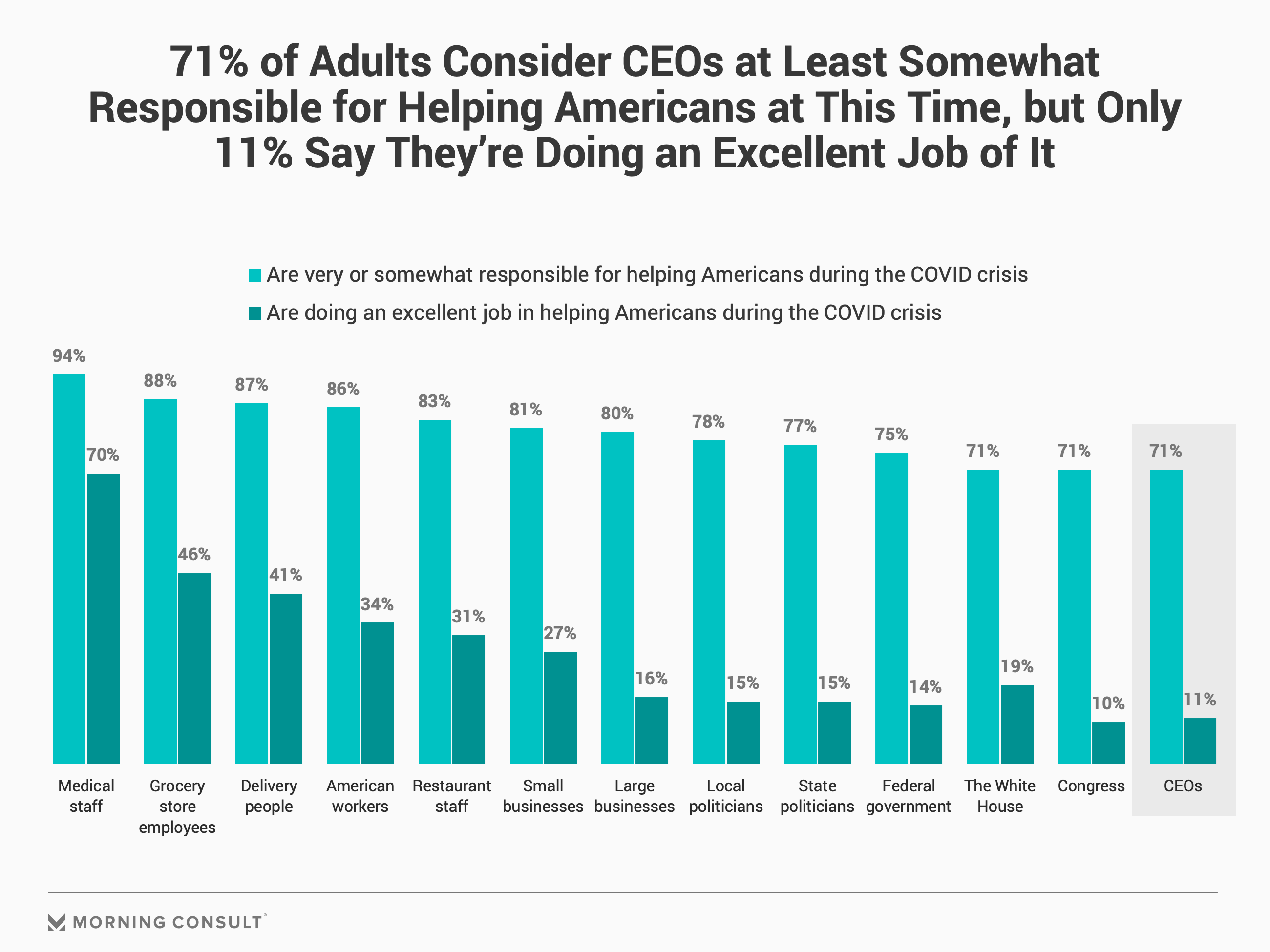 Perhaps this explains why Americans trust CEOs and large companies to lead the United States through the COVID-19 crisis only slightly more than they trust Congress to. 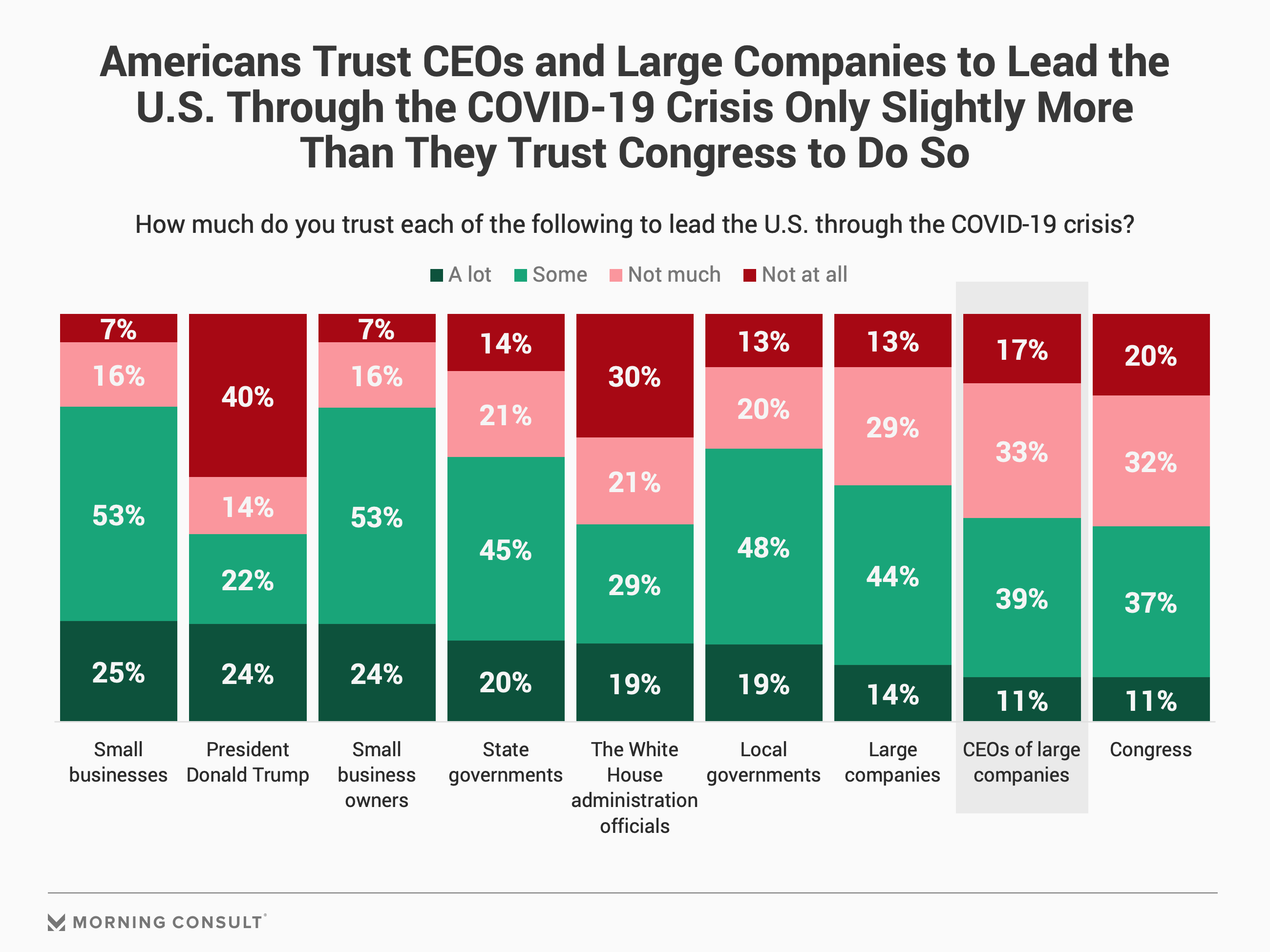 Still, there’s some good news for the myriad executives who’ve made an effort to take action, engage with customers and communicate with key audiences since the outbreak. Though CEO actions during the pandemic had no impact on CEO favorability for about three-quarters of decision-makers, both decision-maker and consumer audiences are nearly three times more likely to say that CEOs’ handling of or actions since the coronavirus outbreak has made them view CEOs more favorably f than less favorably. 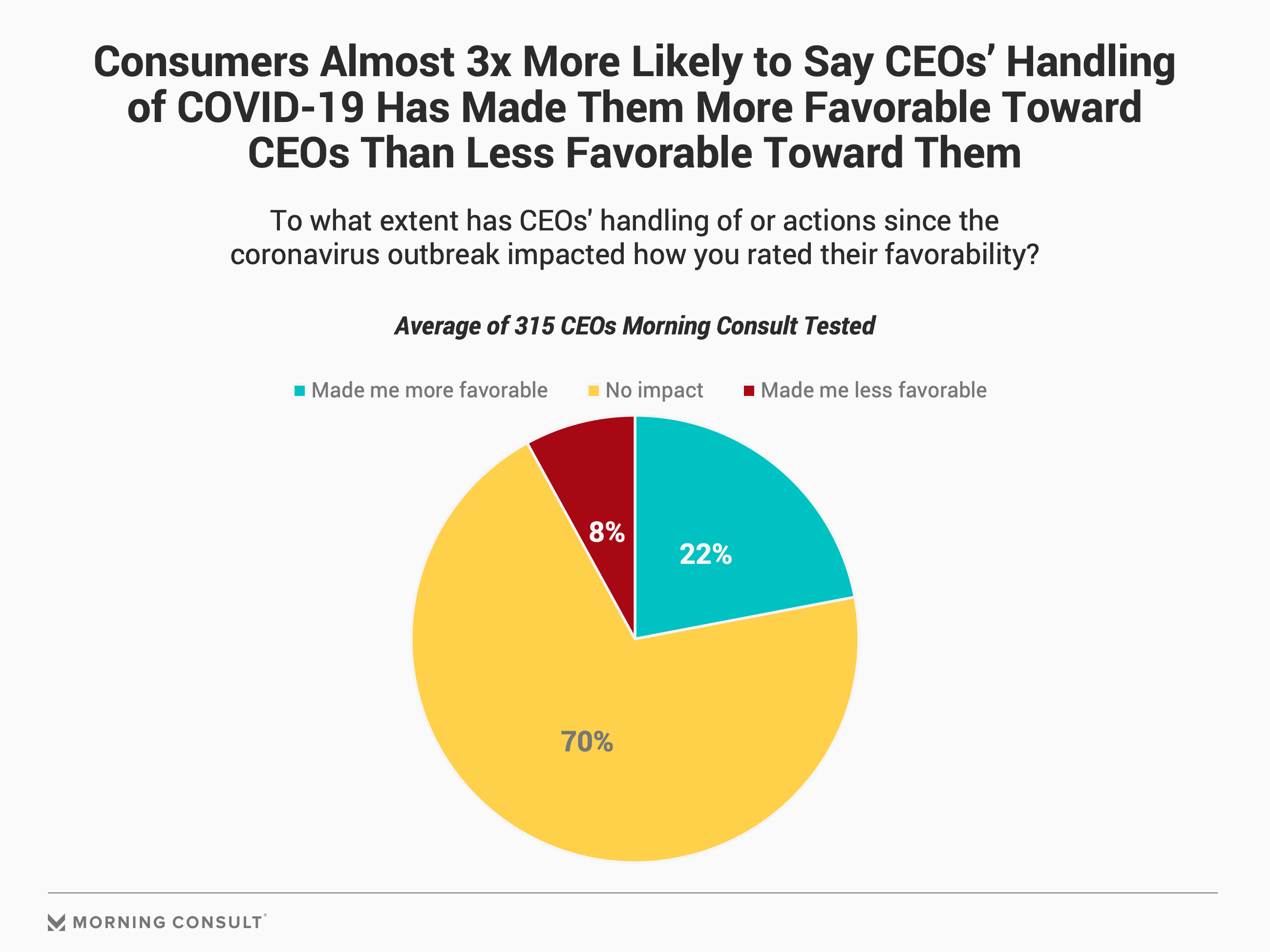 This crisis has forced CEOs to take on the role of Crisis Executive Officer these last few months as they lead their companies, consumers and especially their employees through unprecedented times. There’s much to be said about how CEOs can best navigate their organizations through this storm — and how those best practices have evolved since March — but given high expectations for CEOs to help society through this time, the importance of CEOs’ positive contributions to society more broadly and the reputational benefits to be gained from taking action, this additional responsibility is bound to be more permanent than the pandemic.

As the world around us changes, so too does the role of brands and companies within it. The importance of authentic purpose, stakeholder sensitivity and tangible action have risen with recent events, but it’s evident that given shifting consumer, investor and public opinion leader priorities, the role and responsibilities of the captains of those brands and businesses have forever changed.

Morning Consult determined the drivers behind CEO reputation by asking respondents to assess 315 CEOs and business leaders, including CEOs of most Fortune 250 companies and nearly all of the CEOs of the 200 most advertised brands in the United States. Respondents were asked a range of questions about a given CEO, including an evaluation of favorability, news buzz and overall job performance. Respondents also rated CEOs on 48 attributes, evaluating their public persona, leadership style, vision, personal integrity, shareholder value, stakeholder engagement, societal impact, handling of COVID-19 and more.