Since Super Tuesday, the former VP has led Trump by an average of 43 points with the voting bloc

Donald Trump holds an LGBT rainbow flag given to him by supporter Max Nowak during a campaign rally at the Bank of Colorado Arena on the campus of University of Northern Colorado Oct. 30, 2016, in Greeley, Colo. As Trump gears up for a general election matchup against former Vice President Joe Biden, polling shows LGBTQ voters prefer his opponent by an average of 43 points. (Chip Somodevilla/Getty Images)
By Eli Yokley

According to Morning Consult tracking of the 2020 contest, Biden has led Trump among LGBTQ voters nationwide by an average of 43 percentage points, 63 percent to 20 percent, since polling conducted the week after his March 3 Super Tuesday victories, with figures largely unchanged over 15 surveys. In the latest poll, conducted June 15-21 among more than 30,000 registered voters, Biden led Trump with the demographic by 45 points, 64 percent to 19 percent. (Among all voters, the survey found Biden leads Trump, 47 percent to 39 percent, with a 1-point margin of error.) 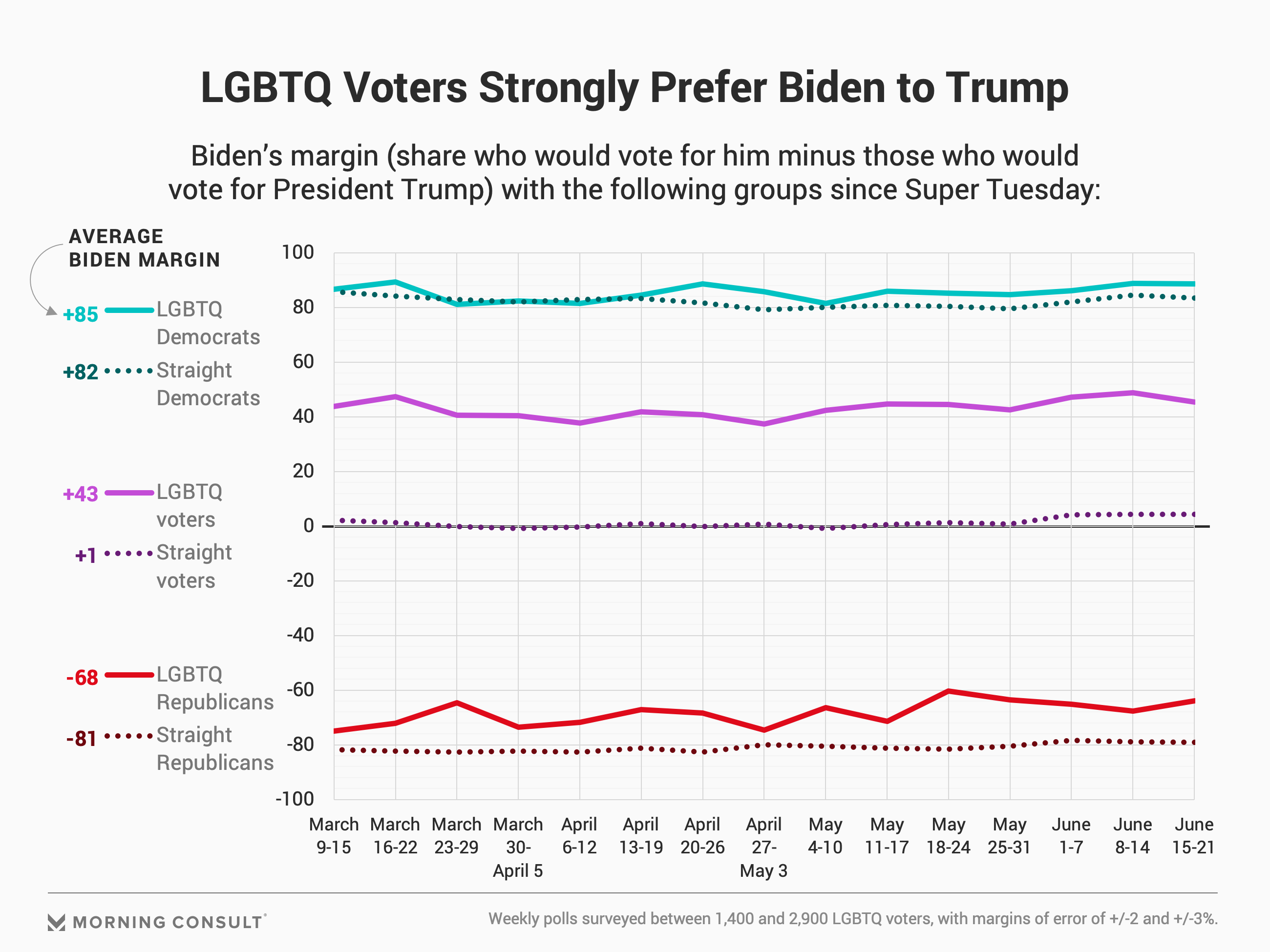 On average, the GOP’s LGBTQ voters are 5 points more likely than straight Republicans to say they’ll vote for Biden (12 percent to 7 percent) and 8 points less likely to say they would vote for Trump (80 percent to 88 percent).

That divergence reflects the group’s younger and more urban bent compared to the broader Republican Party, where their sway is limited compared with their Democratic counterparts. LGBTQ people make up about 4 percent of GOP voters, compared to 12 percent of the Democratic Party’s coalition. 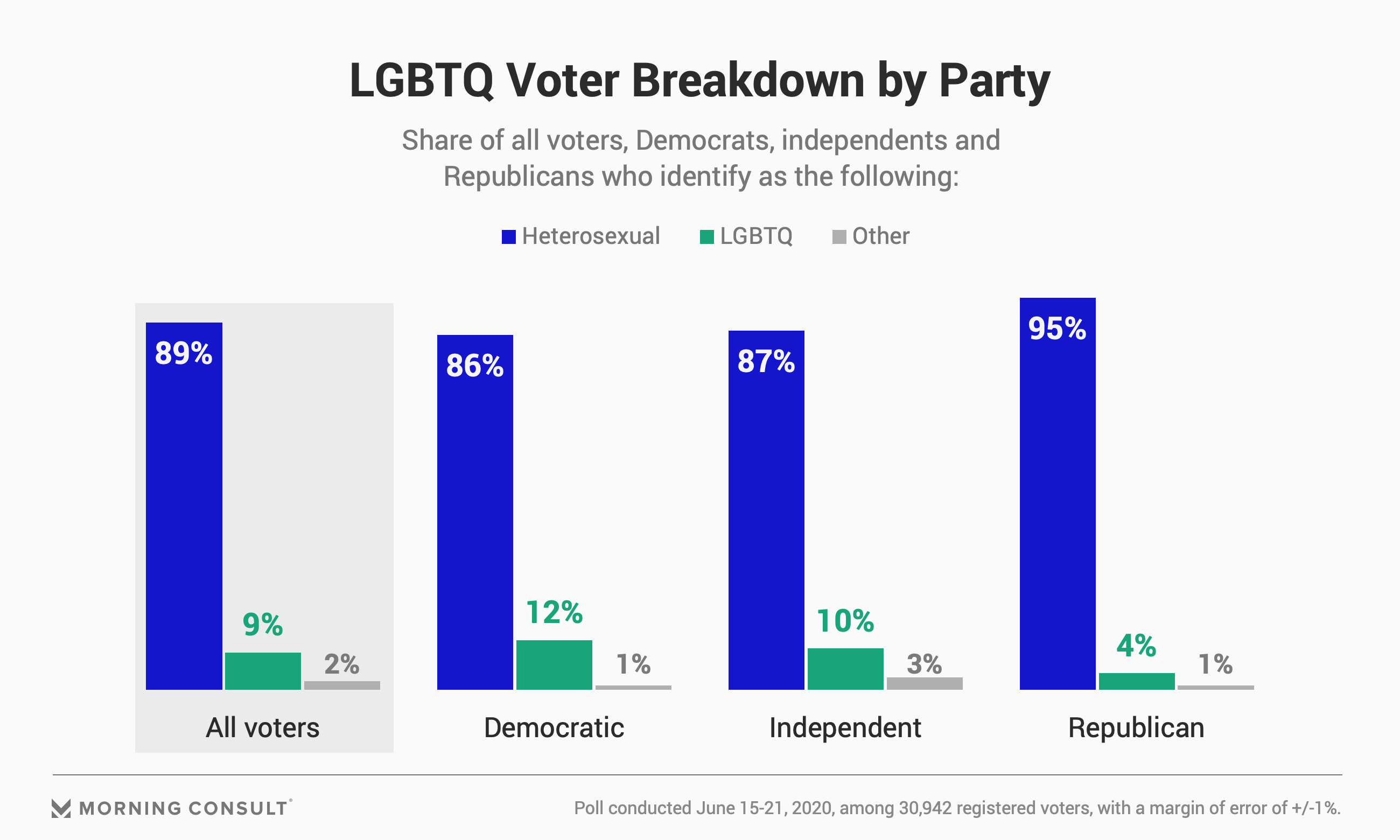 The numbers come at the end of the annual pride month, when millions of Americans salute LGBTQ rights. This year, the celebration was boosted by a surprise Supreme Court decision that banned workplace discrimination based on sexual orientation and gender identity. The popular decision’s 6-3 majority included the vote of Trump appointee and conservative Justice Neil Gorsuch.

Trump campaigned in 2016 as a “real friend” of the gay community, but ultimately lost the vast majority of their votes to Democratic nominee Hillary Clinton, according to exit polling. Since then, Trump and his administration have been at odds with LGBTQ activists on issues involving the military, housing and health care. By comparison, Biden is credited with pushing former President Barack Obama to publicly embrace gay marriage ahead of his 2012 re-election campaign.

Over half of LGBTQ voters (53 percent) have favorable opinions of Biden, more than twice the share (20 percent) who view Trump favorably. Among LGBTQ Republicans, 23 percent have positive views about the former vice president (11 points higher than heterosexual Republicans) and 65 percent have negative opinions (compared to 83 percent of their straight counterparts). 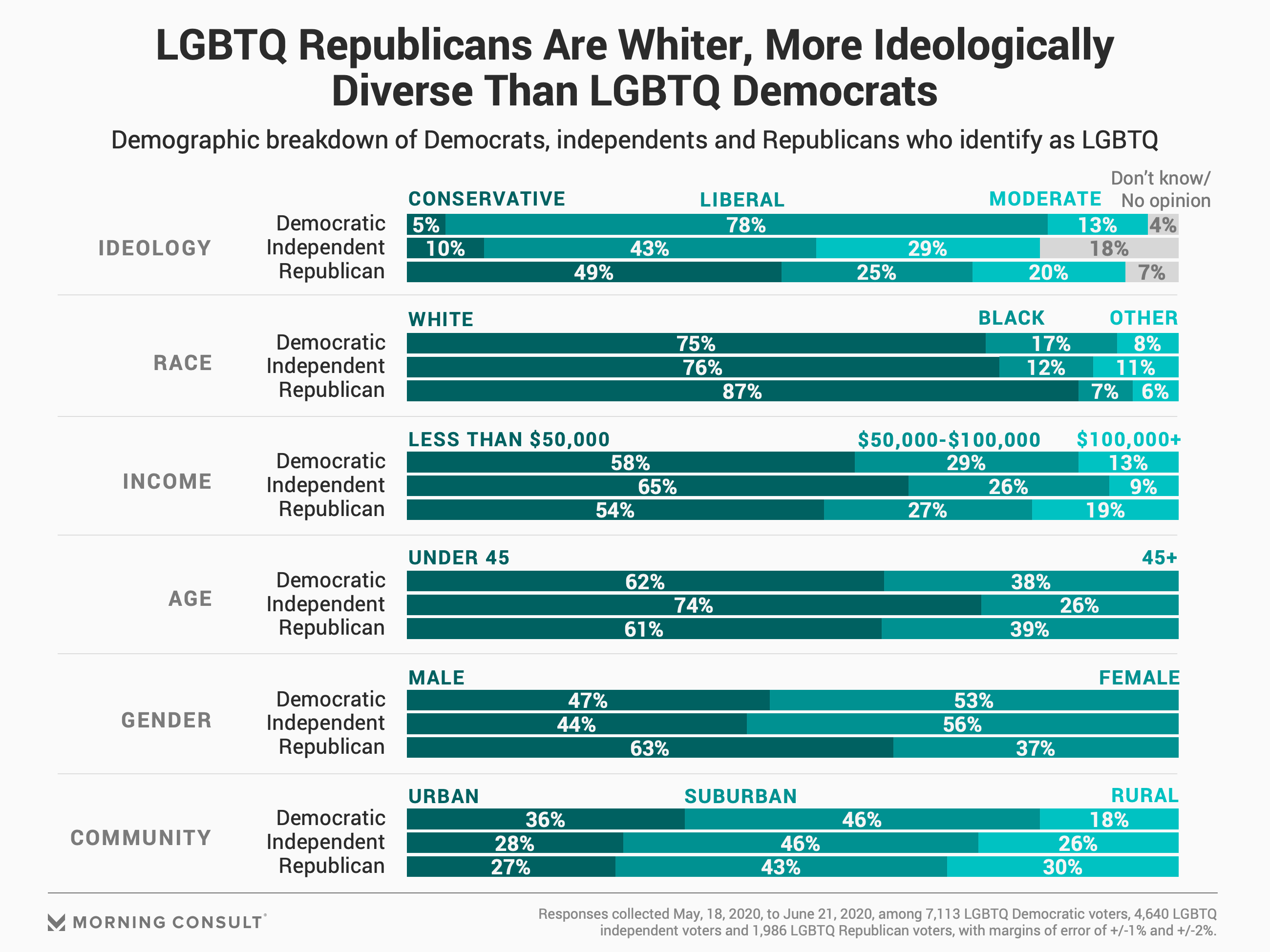 Compared to LGBTQ Democrats, LGBTQ Republicans are less ideologically homogenous: Twenty-five percent identify as liberal, five times the share of LGBTQ Democrats who identify as conservative and they are also 7 points more likely to say they’re moderate (20 percent to 13 percent).

Like the Republican Party as a whole, LGBTQ Republicans are whiter and make more money than their Democratic peers. And they are more likely to be men than either LGBTQ independents or LGBTQ Democrats. 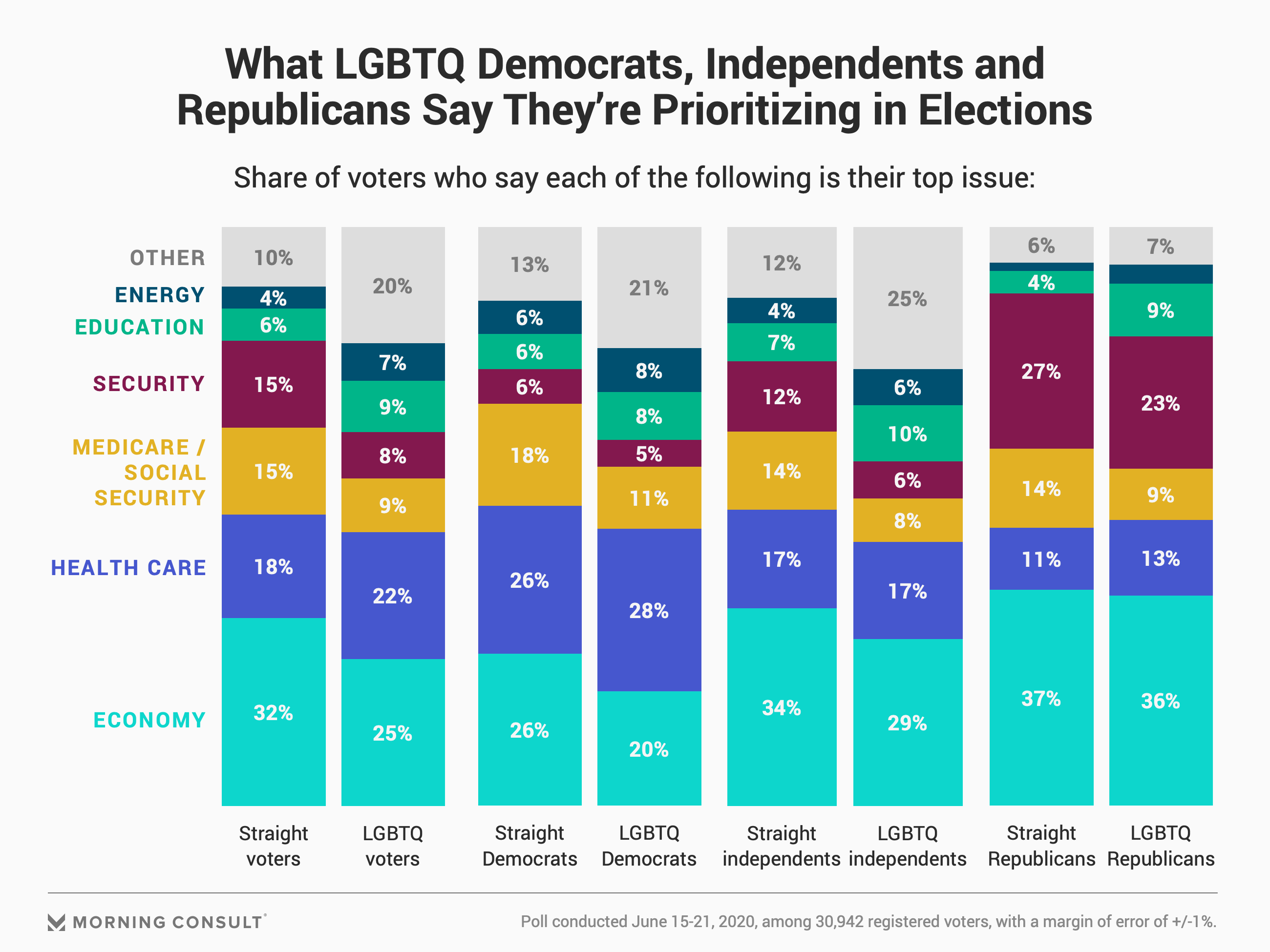