Analysis: Don’t Expect Drop in Unemployment to Continue Past June

The decrease in joblessness in June was primarily driven by an increase in part-time workers who found new jobs and paid furloughed workers who went back to their old jobs, but the composition of the workers who are still unemployed means the U.S. is unlikely to see further improvements to the jobless rate, writes Morning Consult’s John Leer. 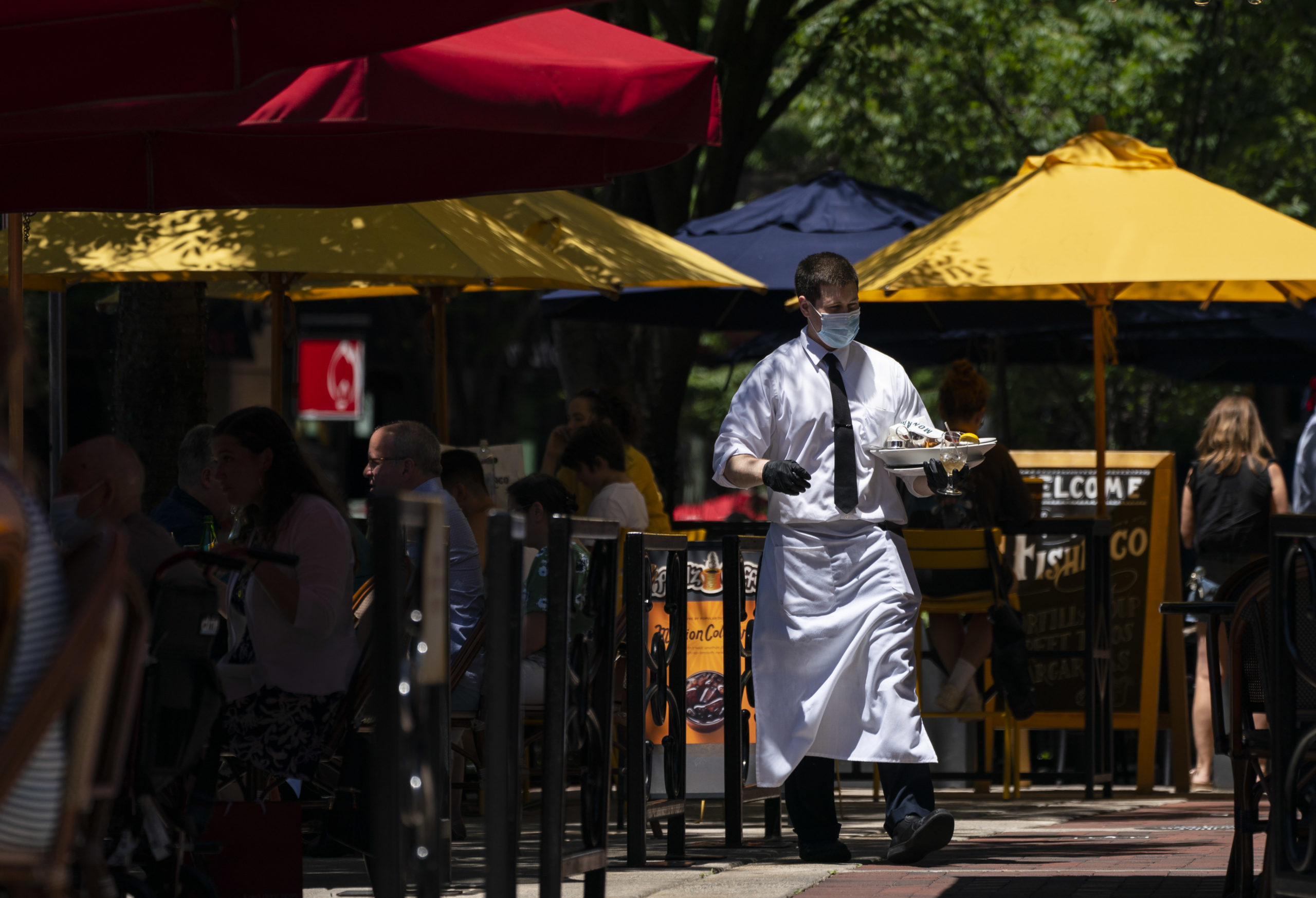 A waiter at a French restaurant in Bethesda, Md. A Morning Consult analysis finds that the gains in new jobs in early June disproportionately came from part-time workers, who make up a significant share of the service sector. (Sarah Silbiger/Getty Images)
By John Leer

The coronavirus pandemic and the ensuing economic fallout have wreaked havoc on U.S. workers. Over 40 million workers have filed for unemployment insurance since the middle of March, and the unemployment rate in April reached 14.7 percent. However, the pandemic has also exposed and exacerbated limitations in these official statistics.

More recently, the coronavirus pandemic has exposed limitations in the unemployment rate produced by the U.S. Bureau of Labor Statistics. These so-called misclassification issues improperly classify some share of furloughed workers as employed rather than unemployed. These classification problems limit policymakers’ ability to consistently track changes in the strength of the U.S. economy. As Fed Chairman Jerome Powell noted during his June 10 press conference, “And it seems quite likely that there will be a significant group” that will be “struggling to find jobs” even after strong job growth.

Thus, from a macroeconomic perspective, the critical questions are how many temporary workers are there in the economy? How many of them have already gone back to work? And should we expect those still on temporary leave to return to work? If so, when?

Using Morning Consult polling data, this study finds that the unemployment rate in June decreased relative to May after holding constant the share of temporary workers classified as unemployed. The decrease was primarily driven by an increase in part-time workers finding new jobs and paid furloughed workers returning to their prior employers.

It is unlikely that the decrease in the unemployment rate in June will continue in the coming months given the composition of the stock of workers who remain unemployed. Businesses tend to be more hesitant to hire full-time workers, and businesses face no additional cost of keeping unpaid furloughed workers on temporary leave. This outlook does not directly consider the effects of recent spread of the virus, which are likely to exert additional downward pressure in terms of bringing laid-off and furloughed workers back to work.

The unemployment rate also suffers serious weaknesses that limit its ability to serve its critical function as an indicator of the cyclical position of the U.S. economy. The BLS generates the unemployment rate by conducting a survey of households, hence the aptly titled Household Survey. The coronavirus has affected the Household Survey through three channels: misclassification of temporary workers; depressed labor force participation rates; and a decrease in survey response rates [1]. This analysis focuses on the first two channels since both are conceptual in nature.

The concepts used to generate the unemployment rate were not designed to account for the unique circumstances of a nationwide pandemic. In response to the pandemic, many businesses placed their workers on temporary leave. These workers should have been classified as unemployed, regardless of whether or not they continued to receive pay, under the BLS definition, which counts U.S. adults as unemployed if they did not work during a specified calendar week each month but could have worked had they been offered a job and actively looked for work sometime over the past four weeks.

But beginning in March, the BLS identified a surge in survey respondents classified as “employed but absent from work due to other reasons.” The “other reasons” clause is important since people who did not work due to being sick or on vacation are technically counted as employed. The BLS acknowledges that some share of these “other reasons” workers should have been classified as unemployed rather than employed but absent from work.

However, the severity of the misclassification problem varies from month to month. The table below presents the official unemployment rate (U6) and the unemployment rate had all “employed but absent from work due to other reasons” respondents been classified as unemployed.

As a matter of policy, the BLS does not recode responses. In this particular case, it is not clear exactly how many of the “other reasons” respondents should have been classified as unemployed. The column Reclassified U6 assumes that all “other reasons” respondents were actually unemployed. Therefore, it serves as an upper bound on the unemployment rate.

Closely related to the misclassification issue is the issue of labor force participation. In order to be counted as unemployed, workers have to have actively looked for work at some point during the four weeks prior to the survey’s reference week. The coronavirus pandemic has likely depressed labor force participation rates, which is not a problem per se. As was the case with the Great Recession, workers drop out of the unemployment rate when they stop looking for work since the economic prospects seem so dire.

While the economic outlook is highly dependent on the status of the outbreak, they are not identical in this case since the virus may disproportionately discourage certain Americans from looking for work. For example, adults with pre-existing health conditions or family care responsibilities may be more likely to not look for work due to the health risk of doing so. These adults drop out of the labor force due to the fears of the virus rather than changes in economic conditions.

These two conceptual issues undermine the basic function of the unemployment rate as an indicator of the cyclical strength of the U.S. economy. Rather, they may reflect changes in the way workers placed on temporary leave are classified or in the ability of workers to look for work free from fear of the health risks of doing so.

How to fix the distorted jobless rate

This analysis directly addresses these conceptual limitations of the unemployment rate by consistently classifying all of workers on temporary leave as unemployed and by exclusively tracking changes in the employment status among workers who were employed in January 2020. In other words, by construction, it does not track what has happened to workers who were unemployed in January 2020 or who entered the labor force in February, and it does not control for whether or not workers laid off or furloughed since February have looked for work. 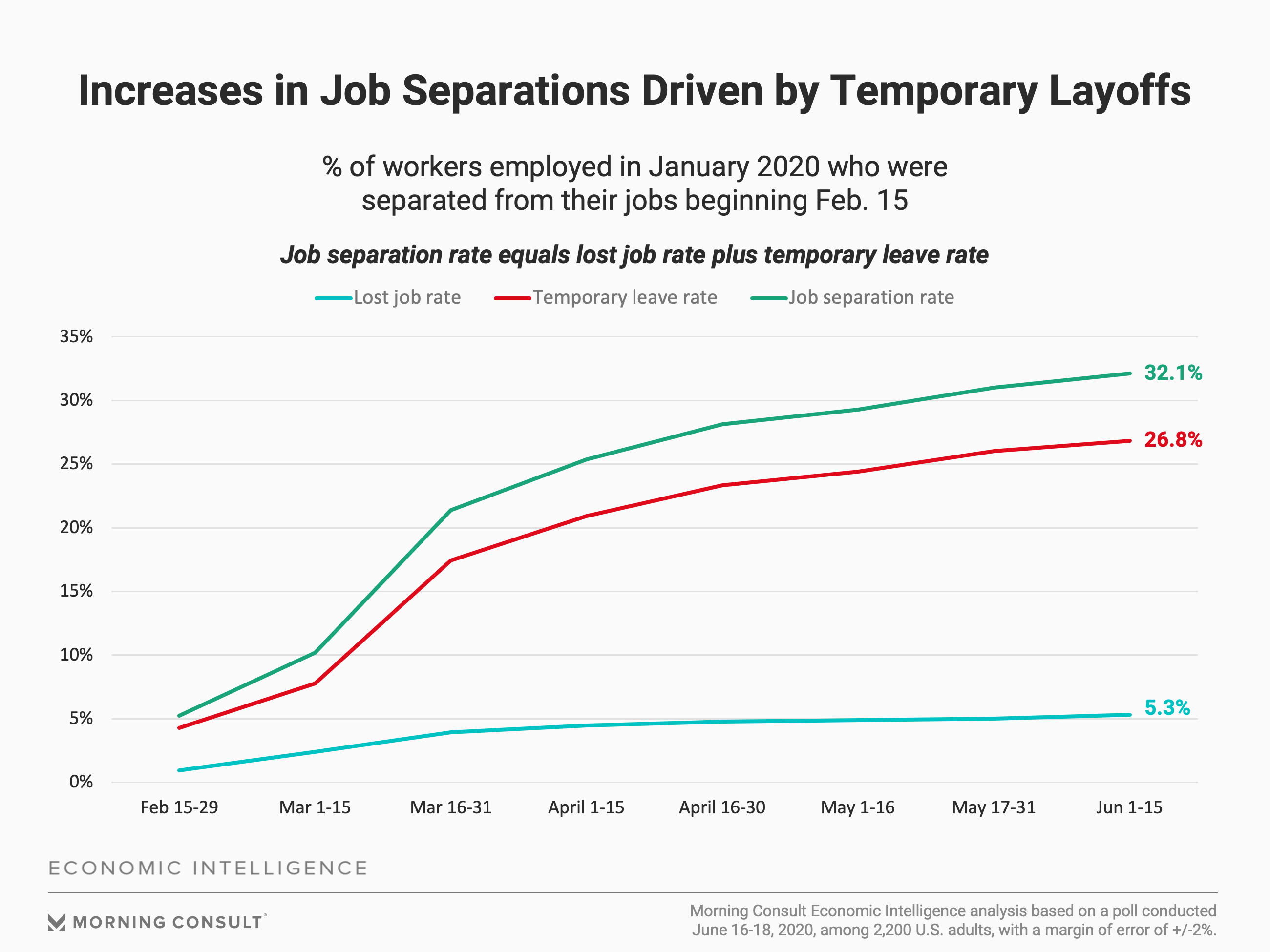 The graph above clearly shows that businesses have preferred placing workers on temporary rather than firing them outright. This approach keeps businesses more attached to workers in case business conditions improve, and they need to quickly increase output. As of June 15, 26.8 percent of workers employed in January 2020 had been temporarily laid off at some point since Feb. 15 with only 5.3 percent experiencing an outright firing. Temporary layoffs are so widespread that economists cannot avoid them, even though they pose thorny classification issues.

The graph also shows that the difference between temporary leave and firings was particularly strong in late March when there was such a high degree of uncertainty surrounding the business outlook. Finally, businesses continued to use temporary layoffs in late May and early June, whereas firings have remained essentially unchanged since late April.

Holding constant the rate of temporary layoffs classified as unemployment, workers continue to be separated from their jobs in late May. This result is consistent with mounting unemployment claims in the past weeks, which do not suffer from the misclassification issue.

The survey then asks all workers who lost their jobs or were placed on a temporary layoff if they found a new job or returned to work for their prior employer during this time period. 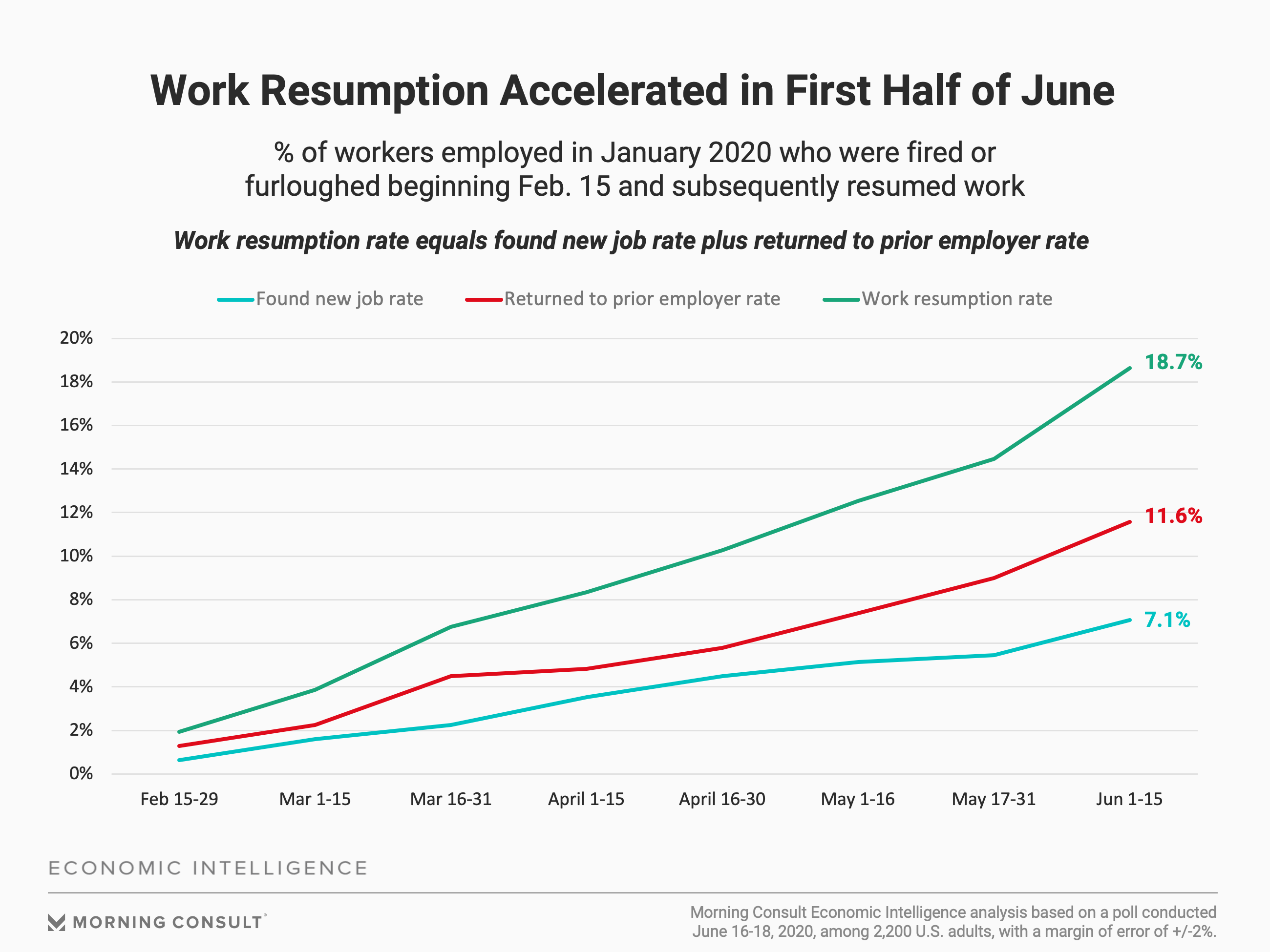 Since the May jobs report was released in early June, fired and furloughed workers have found new jobs and returned to prior employers at a faster rate than they did from Feb. 15 through May 16. This trend marks a positive development for the U.S. economy.

The composition of these workers indicates that the recent trend in job creation over the past month is unlikely to continue. First, the gains in new jobs in early June disproportionately came from part-time workers. Many of the service businesses that were forced to close during the state-wide lockdowns employ part-time workers so it makes sense that they experienced a stronger rebound in jobs in early June once those lockdowns ended. 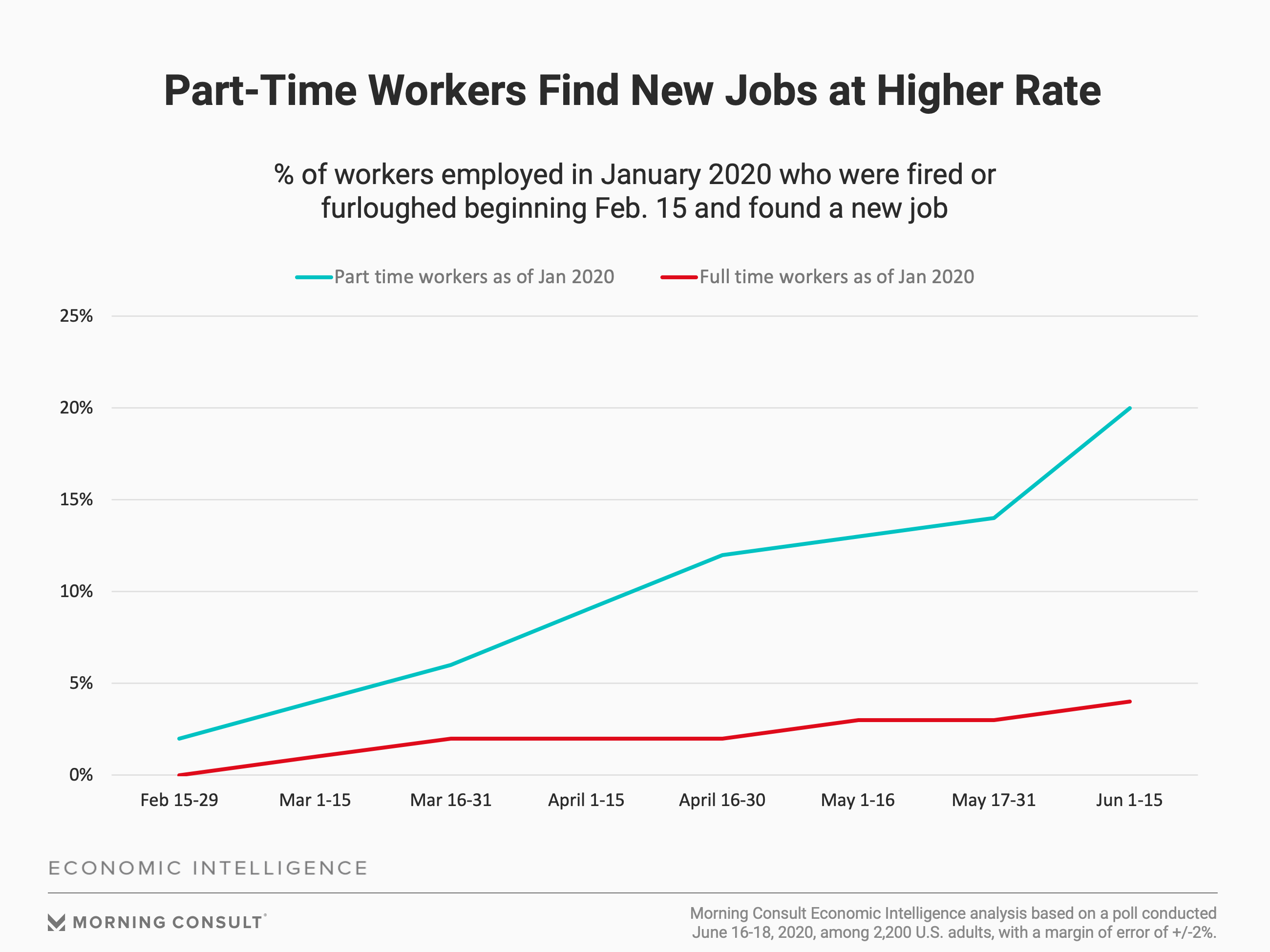 However, the strong recovery in part-time jobs is unlikely to persist after the initial boost from reopenings wears off.

The most likely explanation is that businesses granted some or full pay to those furloughed workers most valuable or essential to the firm in order to deter them from seeking other work. Once the economic situation stabilized, they quickly brought these workers back. 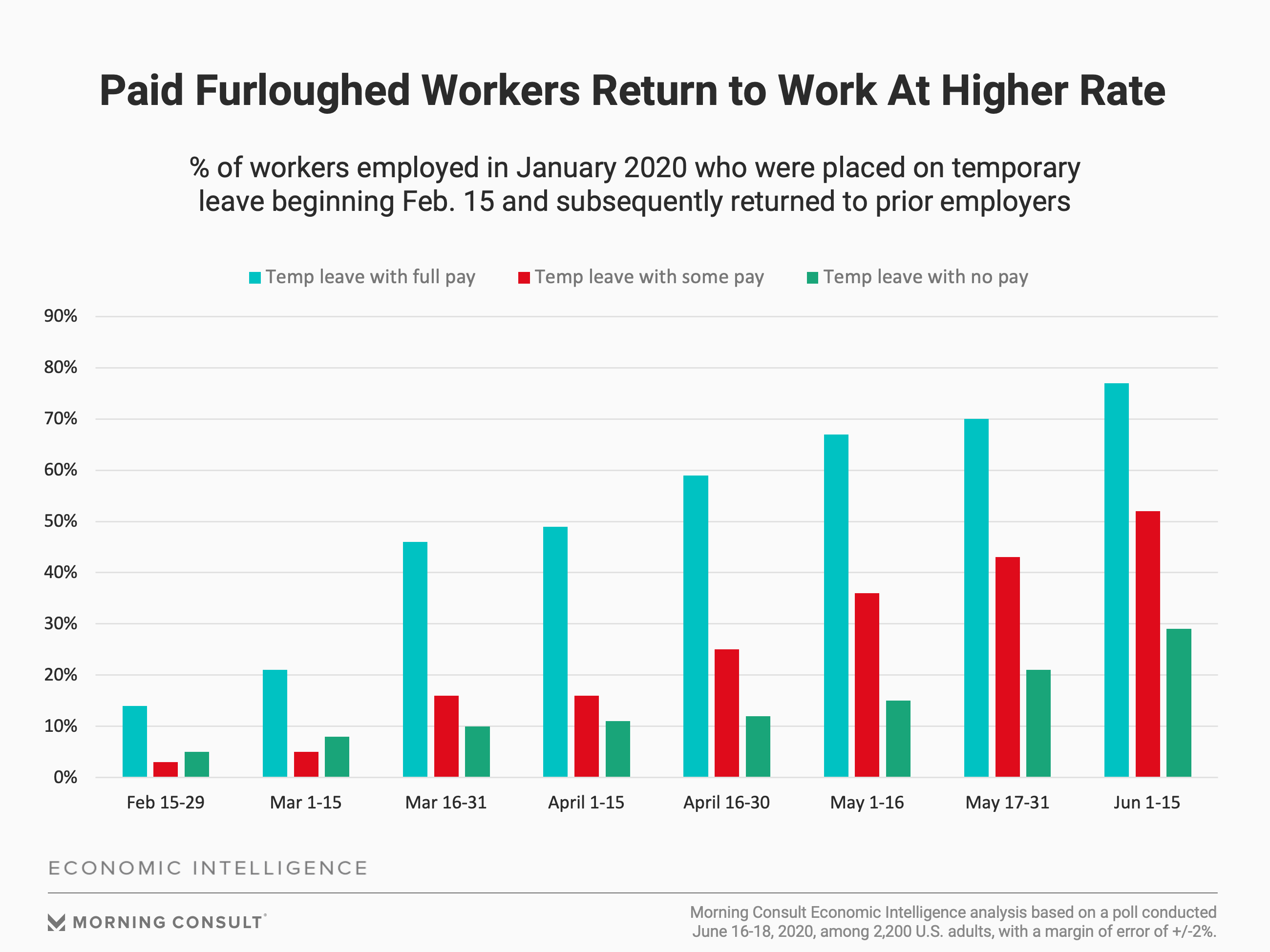 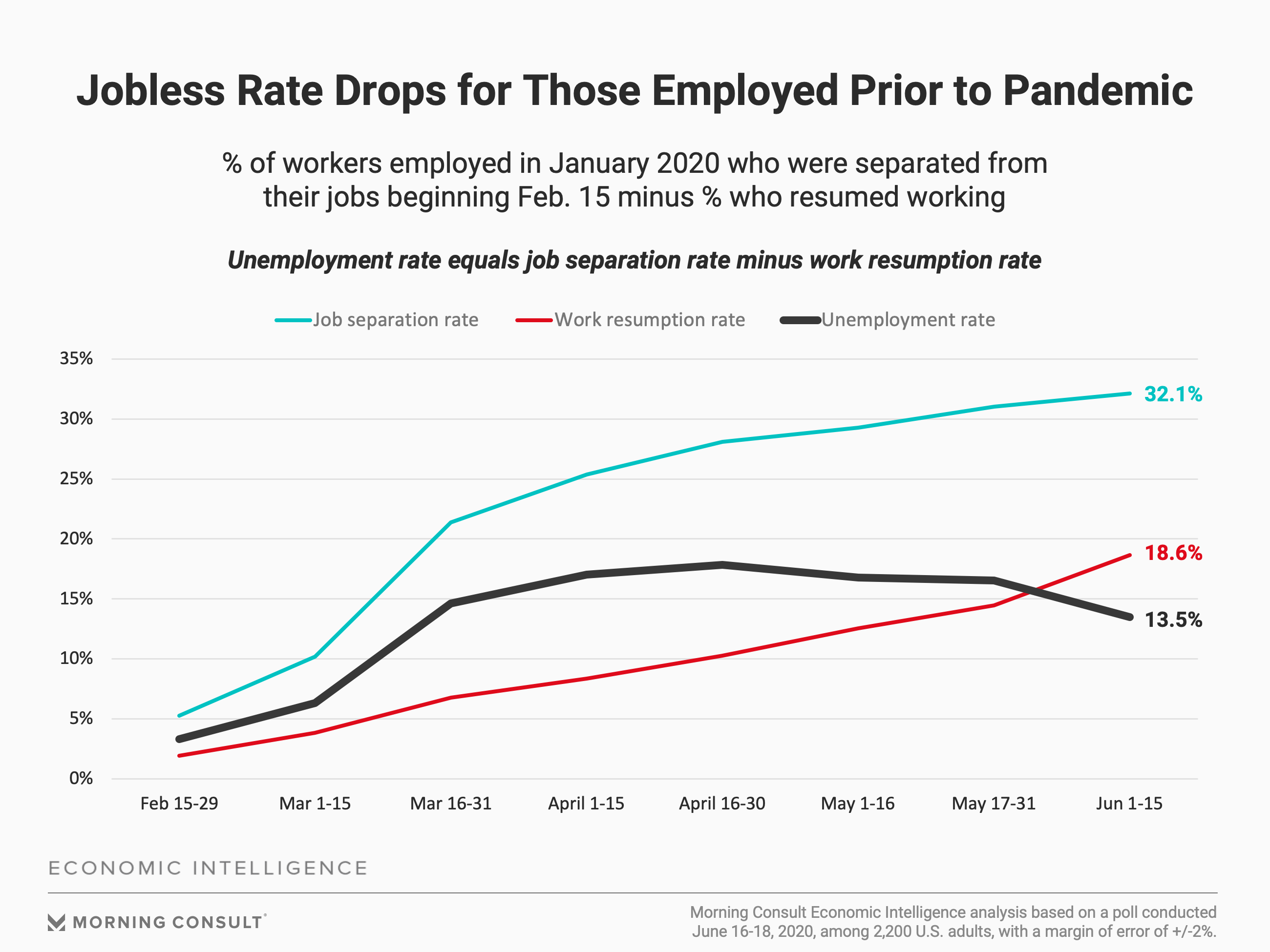 When you correctly and consistently classify temporary layoffs as unemployment and hold constant labor force participation rate, the employment situation clearly improved in late May and early June.

Despite these improvements in June, the employment outlook through the rest of the summer looks bleak. As previously described, the economy already added the lowest hanging fruit, so to speak. Many part-time workers have found new jobs, and the most desirable furloughed workers (i.e., those receiving full pay) have largely already gone back to work. The hard part will be getting full-time workers and unpaid furloughed workers back to work. Given the composition of workers who remain separated from work, it  will be more difficult to decrease the unemployment rate going forward.

The uphill road depicted in this data does not take into consideration the increases in confirmed COVID-19 cases beginning in early and mid-June 2020. Given this situation, it would be imprudent to offer an employment outlook without factoring in the foreseeable slowdown in economic activity in the coming months due to the spread of the virus and fears thereof. These developments act as an additional headwind to improving the employment outcome through the rest of the summer.

[1] The issue of decreasing response rates is widely known and studied by survey methodologies, particularly given low and falling response rates in cell phone surveys. In this particular circumstance, the pandemic decreased the survey’s response rate in May by roughly 15 percent compared to the months prior to the pandemic. This change is problematic if households that declined to take the survey are systematically different from those that took the survey across characteristics relevant to employment. For example, households with members infected with the coronavirus may have declined to take the survey at a higher rate than households without infected members, leading to survey results that fail to reflect the full impact of the virus on affected households.