3 in 4 voters, including half of Republicans, think the country is on the wrong track

Voter optimism has reached a new low amid a resurgence of coronavirus in the United States that’s begun to slow the country’s economic reopening, according to a new Morning Consult/Politico poll.

The June 26-29 survey found 3 in 4 voters think the country is on the wrong track, compared to a quarter who said it’s headed in the right direction. The poll was conducted among 1,984 registered voters, with a margin of error of 2 percentage points.

The survey marks the worst numbers on the question in the 183 polls conducted since immediately after Trump was elected in November 2016, and eclipses a previous record set in a survey released last month amid the nationwide Black Lives Matter demonstrations that continued throughout June. 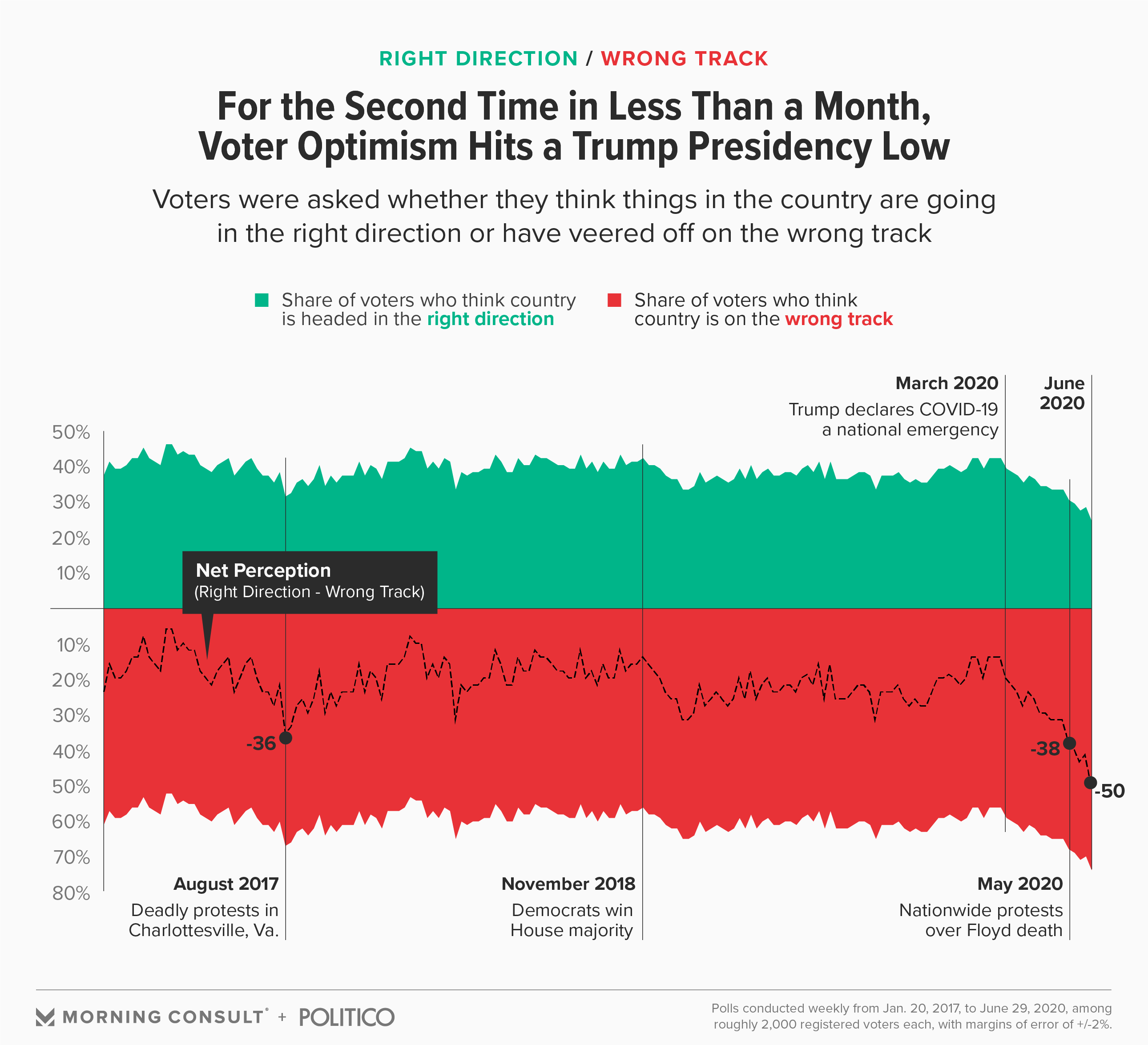 Former Vice President Joe Biden, who has kept a relatively low profile since effectively securing the Democratic presidential nomination in early April, looked to capitalize on the nation’s dim mood on Tuesday, rebuking Trump in a Delaware speech for declaring himself a wartime president while apparently surrendering to the virus.

While the pessimistic figures make for poor reading for Trump, other Morning Consult data suggests he has managed to stop the bleeding in his race against Biden: Responses gathered June 22-28 among 28,722 registered voters found Trump trailing his challenger by 7 points in a head-to-head national survey, 40 percent to 47 percent. That margin is down from the 9-point deficit — a 2020 high — that he was facing less than a month ago. Both of those surveys carry a 1-point margin of error.

Despite that silver lining, pandemic-related indicators have worsened for the president.

Fifty-two percent of voters in the Morning Consult/Politico poll said they’d heard “a lot” about a record number of new coronavirus cases reported by U.S. health authorities last week, while 47 percent gave Trump “poor” marks for managing the spread of COVID-19 in the United States. That’s 10 points higher than the share who said the same in a similar poll conducted in April.

And since a Morning Consult poll released early last month, the share of voters who approve of Trump’s handling of the spread of coronavirus in the United States has fallen 3 points, to 38 percent, while the share who disapprove has increased by 3 points, to 56 percent. 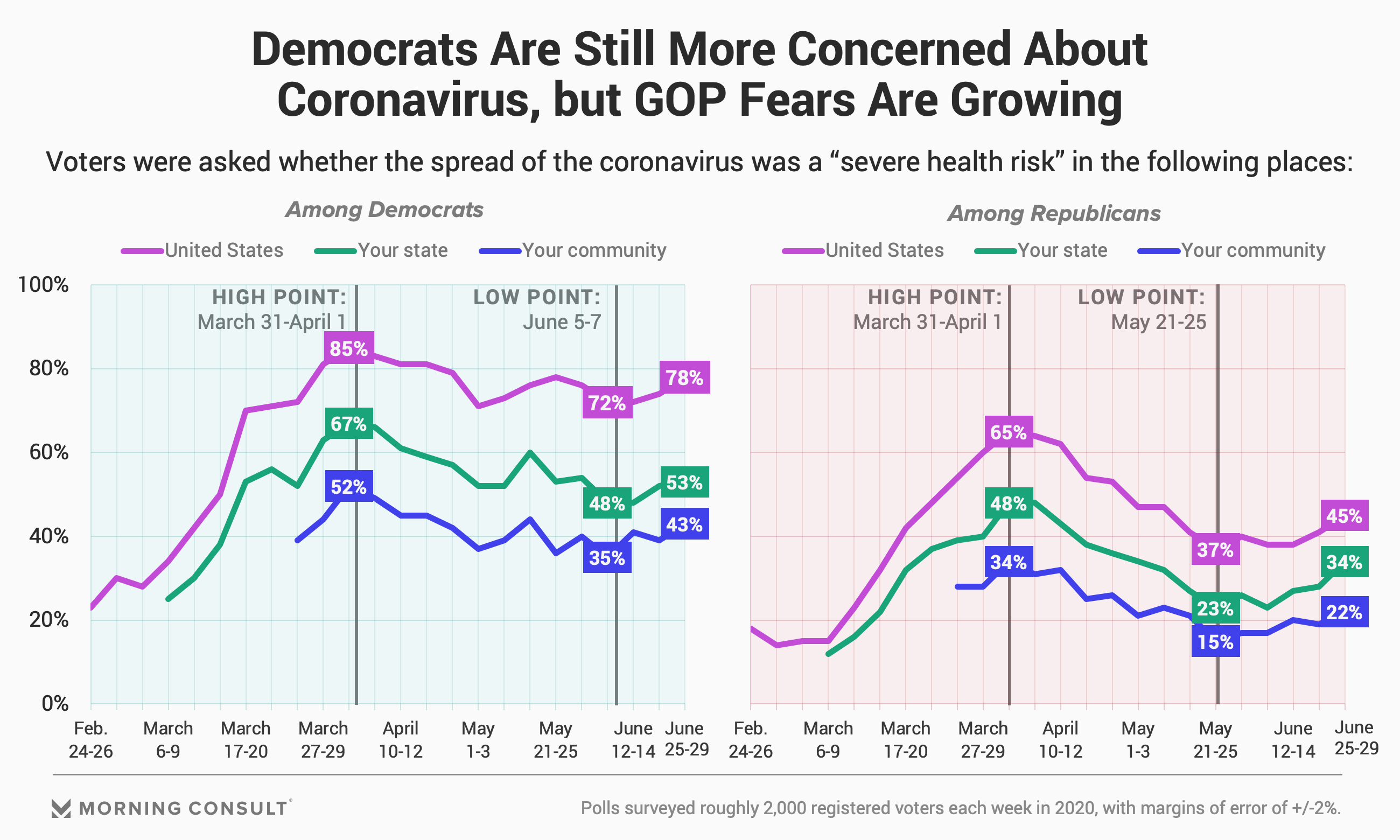 Over the past month, the share of voters who say the coronavirus is a “severe health risk” in the United States has grown 4 points, to 61 percent, including a 5-point increase among Republican voters (to 45 percent) and a 6-point increase among independents (to 56 percent). Among Republicans, the share who said COVID-19 is a “severe health risk” in their own state has increased 8 points, to 34 percent, during that time, while the share of Democrats who said the same (53 percent) went virtually unchanged. 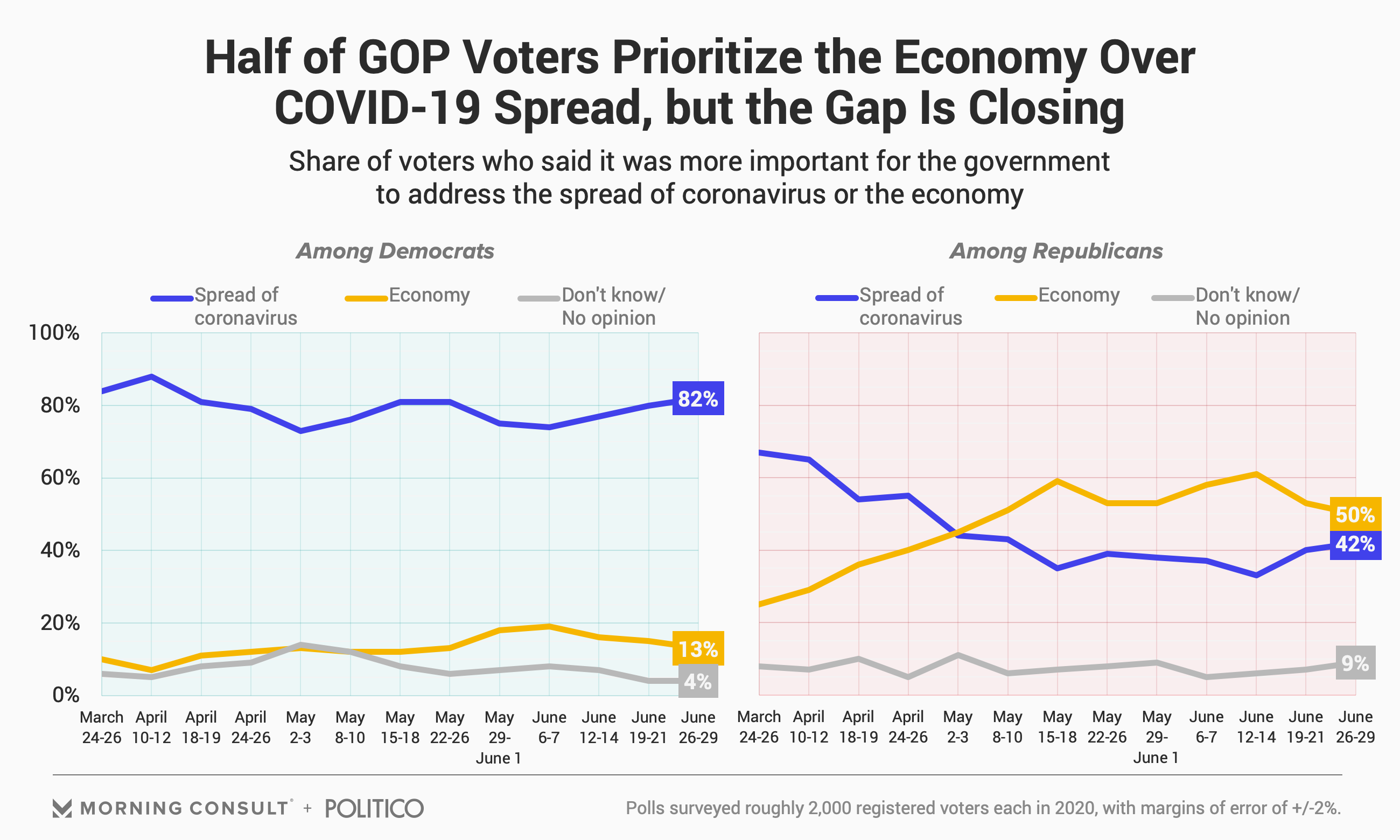 Voters’ newfound concern is being matched by shifting priorities for government.