The Atlanta Dream co-owner’s opposition to Black Lives Matters outraged players, but could play well in her upcoming election

Sen. Kelly Loeffler’s opposition to the WNBA’s Black Lives Matter activism has players calling for her removal as co-owner of the Atlanta Dream and is unlikely to sit well with women’s basketball fans, but it could win favor among GOP voters the Georgia Republican is hoping to woo in a special election to retain her seat this November.

Following the WNBA’s announcement of plans to use the upcoming season as a platform to promote social justice, including through the display of the “Black Lives Matter” mantra on courts and warm-up shirts, Loeffler asserted in a letter to WNBA Commissioner Cathy Engelbert that the league should “be united in our goal to remove politics from sports.” 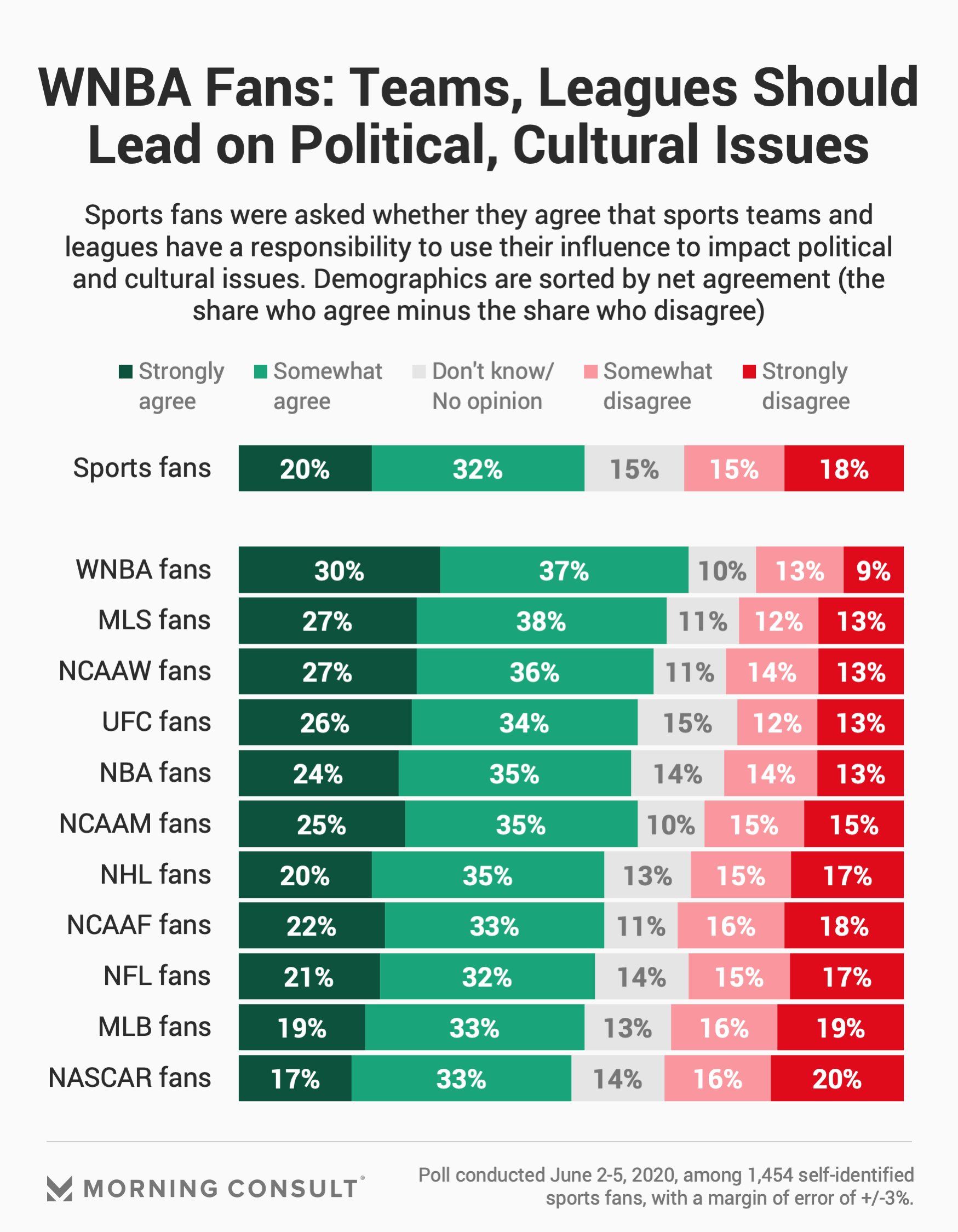 In the June 2-5 survey, 67 percent of WNBA fans said sports teams and leagues have a responsibility to use their influence to impact political and cultural issues, a greater percentage than fans of nearly every other major U.S. sports property. In addition, 64 percent of WNBA fans said it was important that their favorite sports teams and leagues express support for protesters of racial inequality in the wake of George Floyd’s death, also a larger share than among most fans of other sports leagues.

The poll was conducted among 1,454 U.S. adults who identified as sports fans and 469 self-identified WNBA fans, with respective margins of error of 3 and 5 percentage points.

In her letter, Loeffler wrote, “I adamantly oppose the Black Lives Matter political movement, which has advocated for the defunding of police, called for the removal of Jesus from churches and the disruption of the nuclear family structure, harbored anti-Semitic views, and promoted violence and destruction across the country.”

While a preference that athletes’ “stick to sports” softened slightly among Republicans in the wake of Floyd’s killing, Loeffler’s position that sports should remain apolitical is still likely to resonate with the Republicans she’s hoping to win over. In the poll, 57 percent of Republicans agreed it is “not the place of professional sports teams and leagues to weigh in on political and cultural issues.”

In addition, while the popularity of Black Lives Matter increased by double digits among Republican voters between 2017 and another survey conducted last month, 56 percent still held an unfavorable opinion of the movement, including 36 percent who characterized their view as “very unfavorable.”

It has been a challenging year for Loeffler, who is running for a full term in the Senate after being appointed by Gov. Brian Kemp (R) to replace retired Sen. Johnny Isakson (R) in December. She was the subject of a Senate Ethics Committee investigation for selling off stocks after receiving confidential briefings about the potential impact of the coronavirus on the economy. That inquiry has since been dismissed.

Loeffler is competing for Republican votes with Rep. Doug Collins (R-Ga.), whom President Donald Trump reportedly pushed Kemp to appoint to the seat last year. Kemp instead gave the seat to Loeffler.

Both public and internal polling in recent months has shown Collins ahead of Loeffler.

Assuming no candidate in the state’s jungle primary, which also includes Democratic candidates such as Raphael Warnock and Matt Lieberman, receives a majority of the votes, the top two finishers would compete in a runoff in early 2021.