Black squares on corporate Instagram accounts. Logo and mascot reviews. Publicly announced internal audits to examine diversity in company ranks. With these actions, the business world has pledged to shift its priorities to fight racism in the United States, support the Black Lives Matter movement and create a more inclusive corporate culture.

Yet some of the clearest evidence of a lack of inclusion stares black consumers in the face every time they turn on the TV or open the pages of a magazine. Black adults are less likely than their white peers to feel as if they and their communities are represented in promotional content such as ads, according to new Morning Consult polling, conducted June 18-26 among 2,000 Black U.S. adults.

Thirty-two percent of Black consumers said they don’t believe they’re represented “much” or “at all” in marketing materials, while 46 percent said they only see people like themselves represented some of the time. 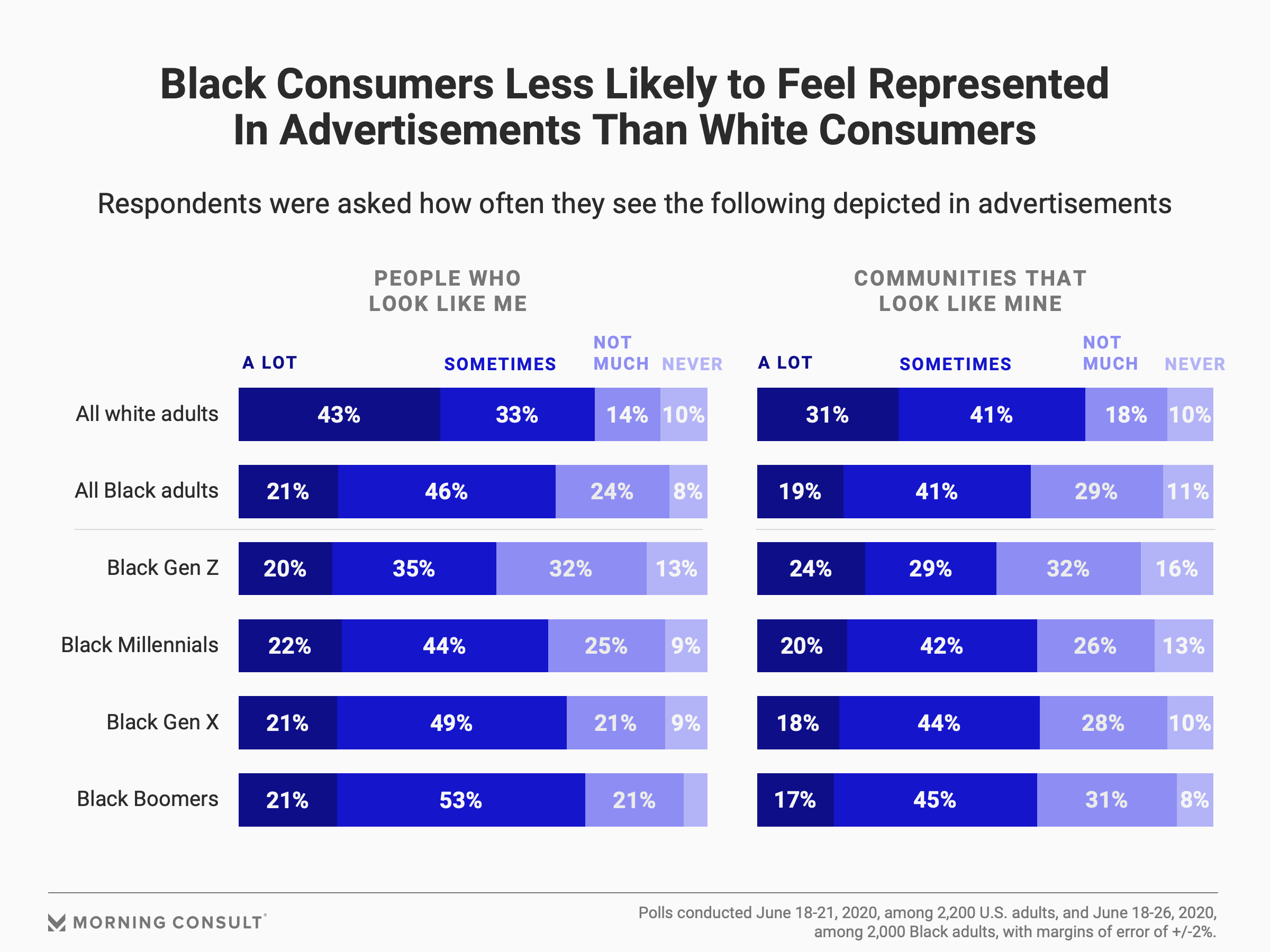 By comparison, less than a quarter (24 percent) of white Americans said they do not feel represented much or ever, according to separate Morning Consult polling conducted June 18-21 among 2,200 U.S. adults. (The survey of Black adults and the subsample of white adults both carry a margin of error of 2 percentage points.)

Forty-three percent of white adults said they see themselves represented in ads “a lot,” compared with only 21 percent of Black people who said the same.

When it comes to their communities, 40 percent of Black Americans said they are not represented much or ever, compared with 28 percent of white people. The finding comes as this group’s buying power has steadily been on the rise: A March 2019 study from the Selig Center for Economic Growth at the University of Georgia found that African American buying power has increased 114 percent since 2000, to about $1.3 trillion in 2018.

Corey Ealons, a partner at public affairs and strategic communications firm Vox Global, said that accurately depicting Black communities is one of the most important steps brands can take to better represent diverse consumers.

“If you speak to people and show them experiences that they recognize, you can grab their attention and develop an even deeper connection with them,” he said.

Related: The Facebook Boycott Is Big News in the Ad Industry, but Few Consumers Know a Lot About It

Showing diversity in ads can also influence purchasing considerations, according to Adobe Inc.’s 2019 Diversity in Advertising study, which found that almost one-third of consumers overall and 50 percent of LGBTQ+ and Black consumers said they are more likely to purchase from a brand if they see diversity in its ads.

Part of the reason ads have not equally represented Black consumers has to do with the traditional demographic marketing model that targets potential customers based on factors such as race, age and income, said Linda Ong, the chief culture officer at Civic Entertainment Group, a marketing services firm that works with clients including HBO, Airbnb Inc. and Facebook Inc.

Targeting by race can lead to stereotyping in ads, Ong said, because the process assumes the most important thing that Black people have in common is their ethnicity.

“There has been a lot of movement in the past couple of years to move toward more psychographic and different kinds of models,” such as targeting fans of the same show, she said. “All Black people are not alike, so the idea that they buy things based on race is just sort of faulty from the premise.”

But while the ad industry is working to be more inclusive in targeting and content creation, even among ads that show racially diverse groups of people, Ong said marketers often treat it as checking a box when casting Black actors. For some companies that might see representation as a requirement to fulfill in order to avoid backlash, they tend to cast light-skinned or biracial people, Ong said.

“We don’t see a lot of dark-skinned black people represented in media, and certainly not in advertising,” she said.

Even well-meaning brands that want to “dip their toes” into diversity gravitate toward showing biracial couples as opposed to exclusively Black families, Ong said. That step is one in the right direction, but Ong said brands need to cast actors with a wider range of skin tones to more fully represent the Black community.

Nowadays, considering that marketers can target and track the success of campaigns using data analytics tools, it’s in their best interest to represent a wider range of consumers in order to get as many people as possible to see and enjoy their content, Ealons said.

“We judge content today, whether it’s advertising or programs on television or movies, by how many eyeballs see it at any given time,” Ealons said. “The more diverse the content is, the more people get to see it, and the more it is appreciated and recognized.”

While there is clearly room for improvement in Black representation in advertising, Ealons said Morning Consult’s latest survey results indicate progress over time.

Based on his own observations, Ealons said that the civil rights movement and the election of former President Barack Obama in 2008 both marked the start to periods of improvement for diversity in ads, with each moment resulting in less stereotypical depiction of Black people in marketing content.

But Ealons said the most recent wave of support for the Black Lives Matter movement signifies a turning of the tide among advertisers and content creators, in that companies seem to be taking a more significant role in addressing systemic racism beyond using the cause to strengthen their own brand image.

“The thing that’s different about this moment with marketers in particular is that in the past — it was a sincere and pure marketing exercise to get specific communities interested in purchasing a product,” Ealons said. “Now, it’s more about wanting to impact society more broadly, not just about selling a product.”