Nearly 1 in 3 Voters Think Pipeline Permitting Process Should Be More Difficult, Despite Recent Setbacks for Operators 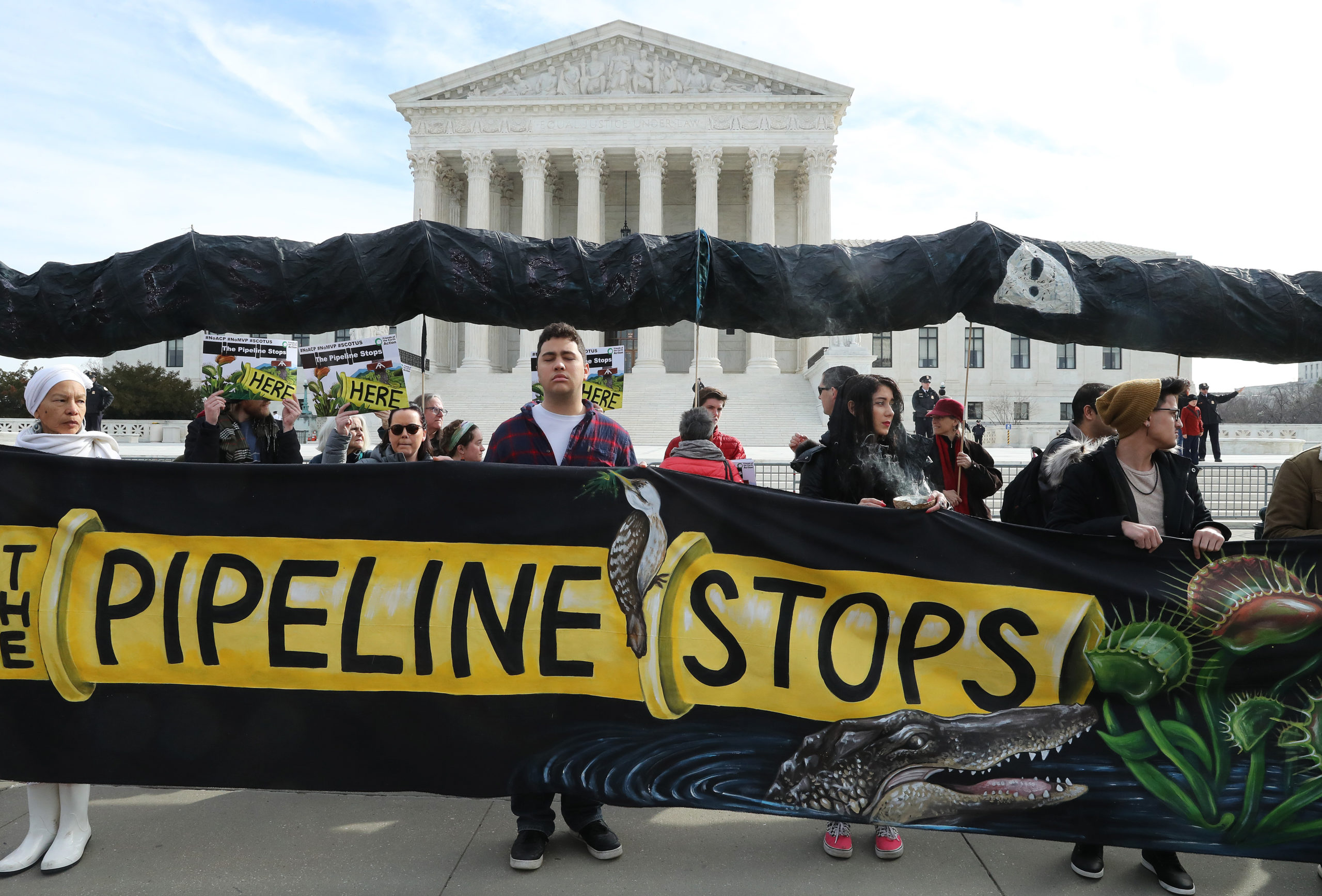 Despite the delay or downfall of several oil and gas pipelines this month, new data from Morning Consult indicates that many voters think the regulatory process is fair or should be more strict. 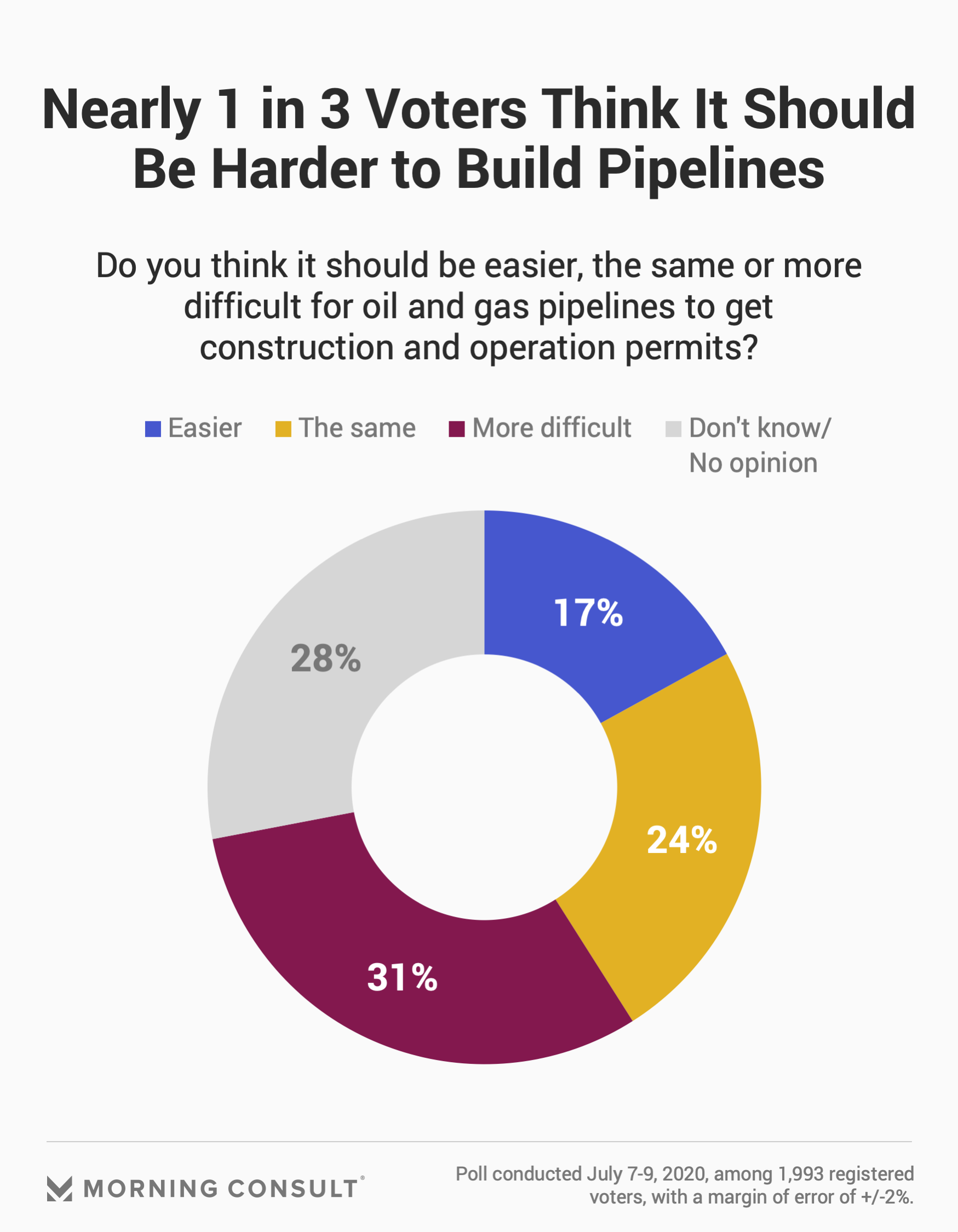 According to the July 7-9 poll, 31 percent of voters think it should be more difficult for pipeline operators to get permits for construction and operation, and 24 percent say the regulatory process — which the industry has panned — is appropriate.

The poll was conducted following the July 5 announcement that the partners Dominion Energy Inc. and Duke Energy Corp. had elected to cancel their Atlantic Coast Pipeline, a natural gas project first announced in 2014 but plagued by exorbitant lawsuits in the years since. The utility companies said the legal process had increased the pipeline’s cost from as little as $4.5 billion to $8 billion over the last several years, and had become untenable.

And in the days that followed, two of the most high-profile pipelines in the country also fell victim to legal uncertainty, with almost operatic timing.

The Dakota Access oil pipeline, which has been operating for several years but remains the object of protest and resistance by Indigenous and environmental activists, was ordered to pause operation, pending a more extensive environmental review. In the weeks since, pipeline operator Energy Transfer LP won the right to continue pumping oil while the decision works its way through the appellate court.

And on July 6, the Supreme Court rejected a Trump administration request to reverse a Montana federal judge’s decision to block construction of some parts of the Keystone XL oil pipeline. However, the court also ruled to allow a permit program that would allow oil and gas pipelines to cross waterways with light regulatory scrutiny.

Pluralities approved of the legal decisions delaying or pausing operation for the Dakota Access (43 percent) and Keystone XL (36 percent) pipelines, while the share disapproving hovered between 25 and 30 percent in both cases. Thirty-four percent approved of the Dominion and Duke decision to cancel the Atlantic Coast Pipeline. 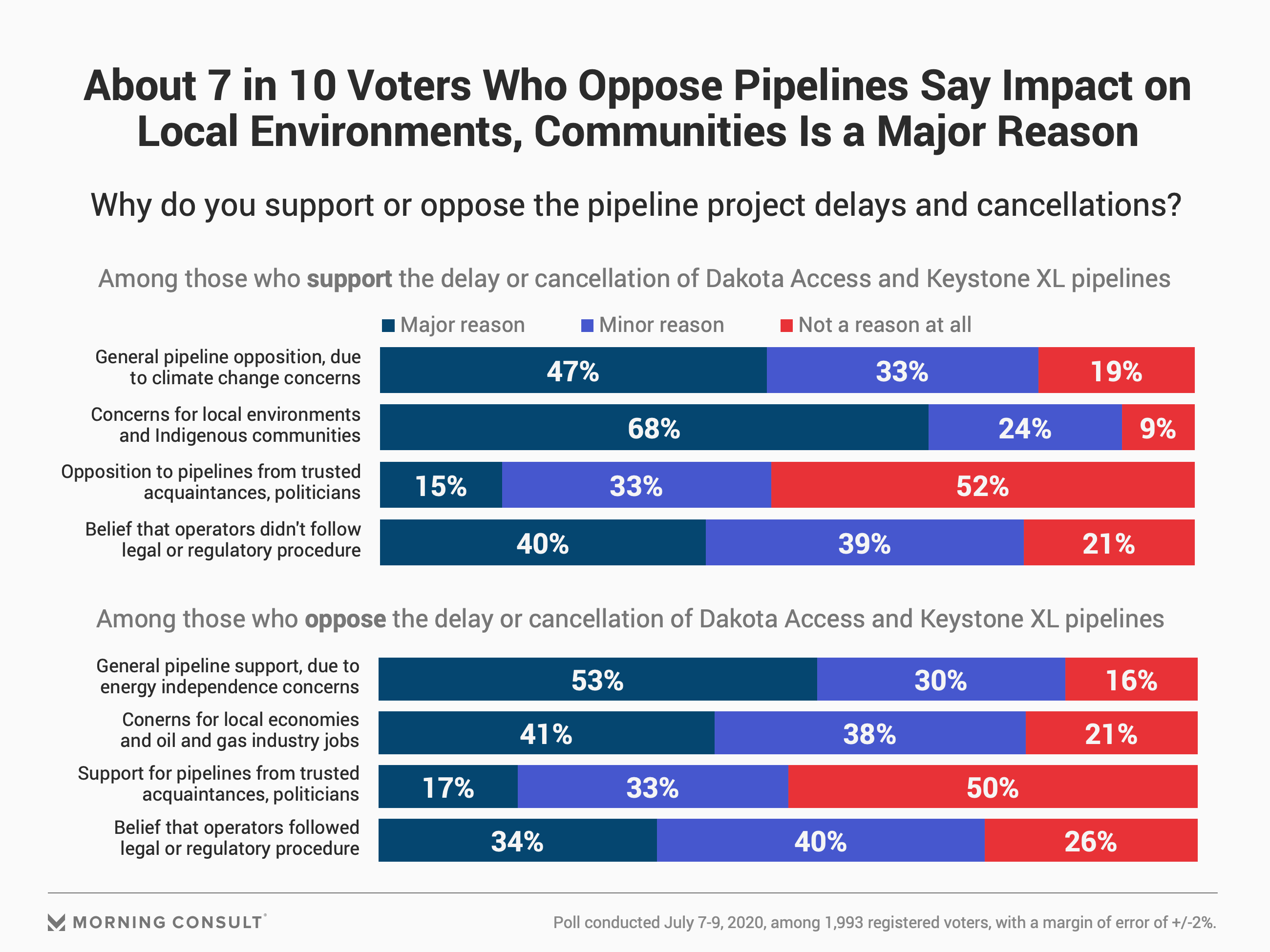 Smaller shares said the following were major reasons for their sentiments toward the rulings: a general disapproval of pipeline construction due to climate change and other factors (47 percent); a belief that the operating companies did not follow proper regulatory or legal procedure (40 percent); and the opinion of a trusted person or politician who disapproved of the projects (15 percent).

For those who opposed the rulings, general energy independence concerns were a major reason for 53 percent of respondents, while smaller shares cited concern for industry jobs and local economies (41 percent), a belief that the pipeline operators followed procedure (34 percent) and the opinion of a trusted person or politician who approved of the pipeline projects (17 percent).

The poll surveyed 1,993 registered voters and has a margin of error of 2 percentage points.