Members of the Washington Wizards and Washington Mystics basketball teams rally at the MLK Memorial to support Black Lives Matter and to mark the liberation of slavery on June 19, 2020 in Washington, DC. Fifty-four percent of NBA fans are non-white, making it the only majority-minority fan base among the four major team sports. (Michael A. McCoy/Getty Images)
By Alex Silverman

When the NBA resumes its season Thursday at the Walt Disney World Resort, it will be with some highly visible reminders of the league’s support for the “Black Lives Matter” movement — efforts that its core audience will embrace, according to new Morning Consult survey results. 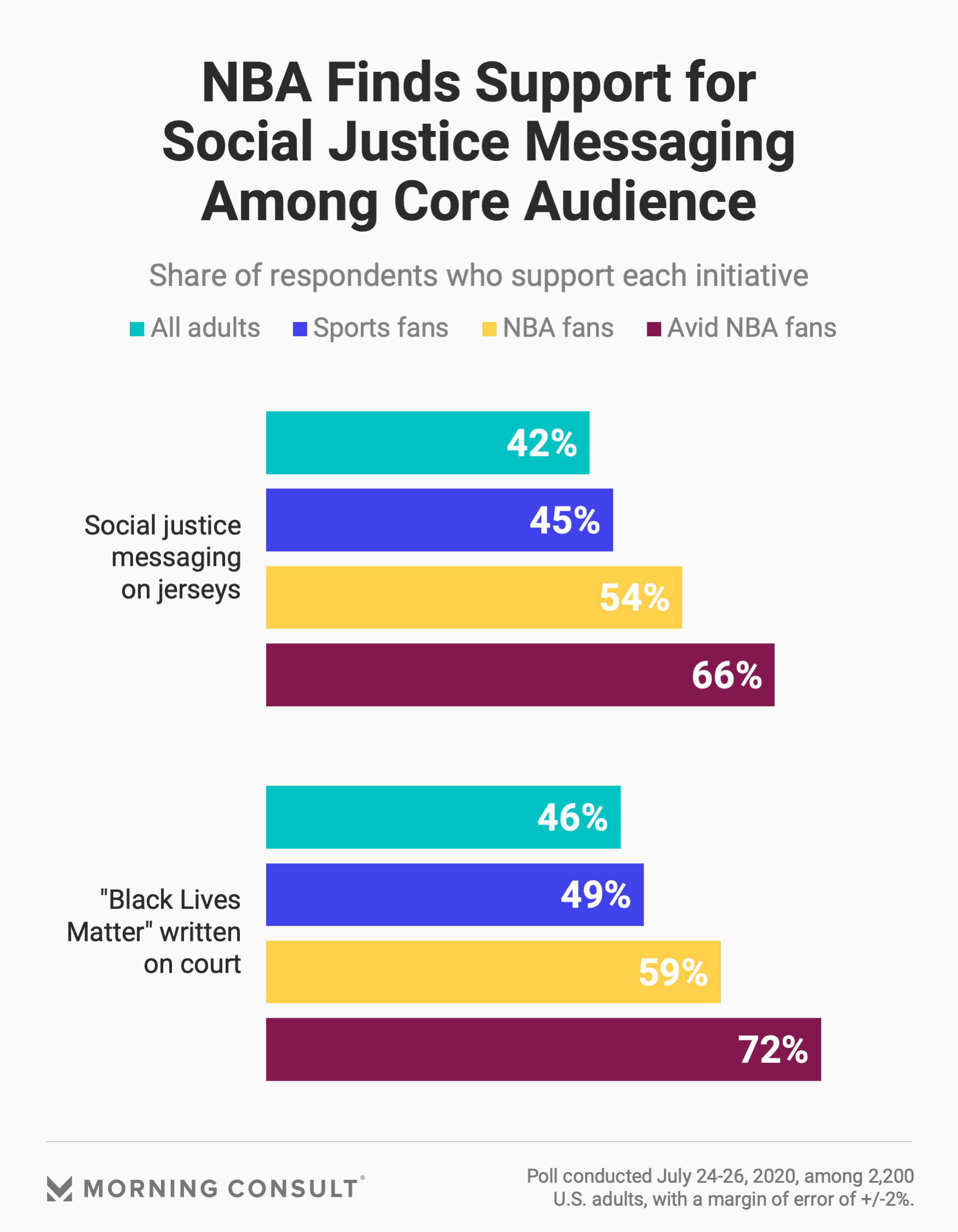 In a poll conducted July 24-26, 59 percent of NBA fans said they support the league printing the phrase “Black Lives Matter” on the court and 54 percent favor allowing players to feature social justice-related messages on their jerseys. Support for those decisions is even greater among self-identified avid NBA fans: 72 percent favor featuring “Black Lives Matter” on the hardwood and 66 percent back the uniform displays.

Support for the initiatives among the broader population of sports fans is more tepid, with 49 percent in favor of the court messaging and 45 percent supporting the uniform messages.

The NBA suspended its 2019-20 season on March 11 after Utah Jazz center Rudy Gobert tested positive for coronavirus, the first domino to fall in the country’s subsequent sports shutdown.

In the wake of the police killing of George Floyd in Minneapolis, and as leaders negotiated a return to play, NBA players demanded that any plan offer them a platform to advocate for racial equality. Some players, including Brooklyn Nets guard Kyrie Irving, even suggested players decline to play so they could focus on social progress.

Ultimately, the league and the players’ union agreed that players would be allowed to choose from 29 phrases to wear on their uniforms, a list that includes “Say Their Names” and “I Can’t Breathe.” Given the demographic makeup of the NBA’s biggest fans, the league won’t be alienating the bulk of its audience by opting not to “stick to sports.”

Demographic data from Morning Consult Brand Intelligence shows NBA fans, or those who have a “very favorable” view of at least one NBA team, are more likely to identify as Democrats and are more diverse than fans of the NFL, MLB or NHL. 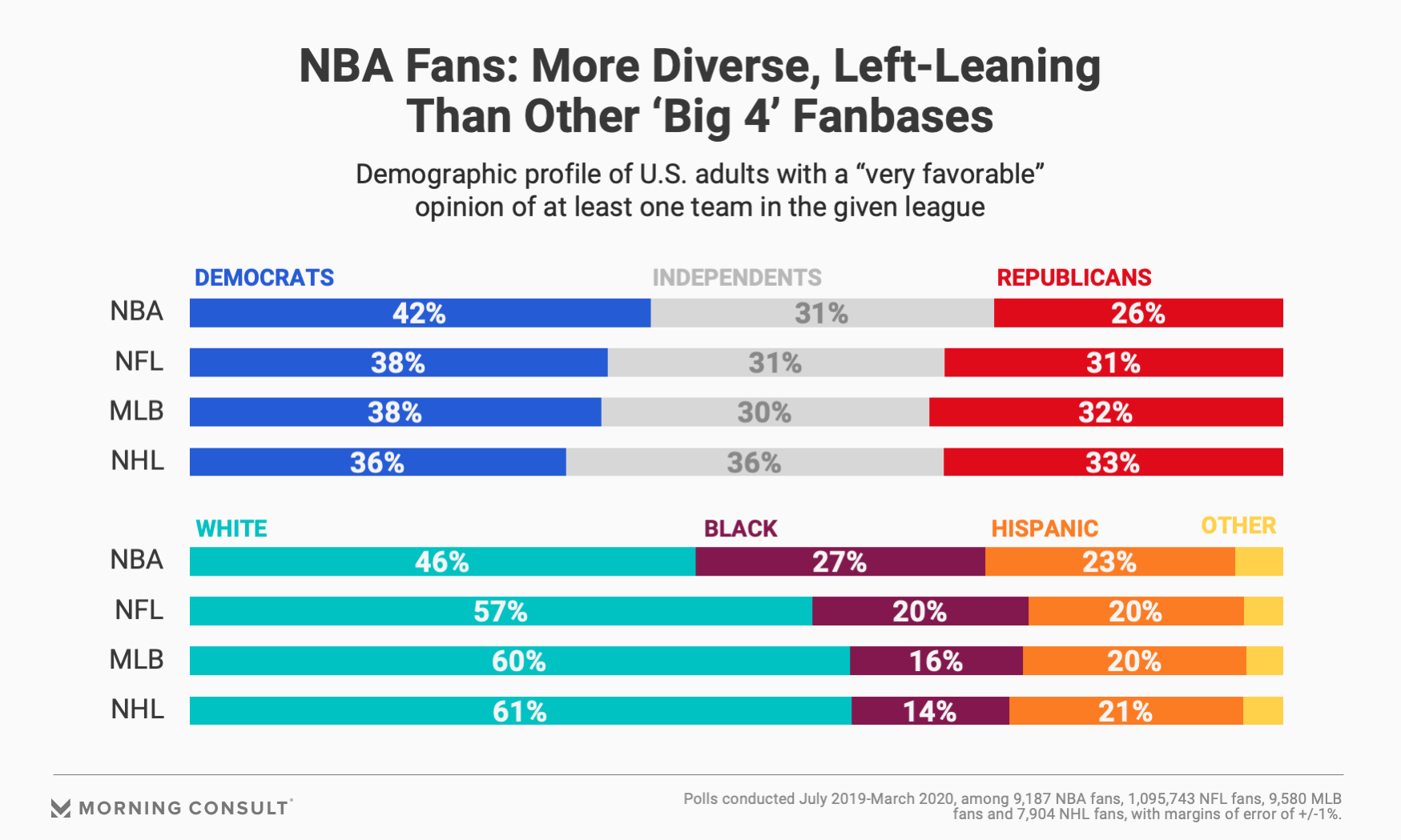 The NBA also has a much more diverse fan base, proportionally speaking, than its counterparts in football, hockey or baseball. In fact, it is the only one of the four U.S. major team sports that has a majority of non-white fans. Forty-six percent of NBA fans are white, compared to 57 percent for the NFL, 60 percent for MLB and 61 percent for the NHL. At 27 percent and 23 percent, larger portions of the league’s fan base are Black and Hispanic, respectively, than any of the other three leagues.

Previous Morning Consult research shows NBA fans are more open to sports leagues taking positions on social and political issues than fans of other men’s team sports. In a June 2-5 poll, 59 percent of NBA fans said it is the responsibility of teams and leagues to use their influence to advance political and social causes, a larger share than fans of the NFL, MLB and NHL, but a smaller share than WNBA and MLS followers.

The NBA isn’t the only sports league to incorporate social justice messaging into its return-to-play plans. MLB stenciled the letters “BLM” on pitchers mounds across the league on Opening Day last week, a gesture it announced after the NBA had already unveiled its plans.

The NHL is launching a new program in conjunction with its return to play this Saturday called #WeSkateFor that will allow players to express their support for a wide variety of causes through personalized helmet stickers and social media content. The WNBA, which tipped off its season over the weekend, also printed “Black Lives Matter” on the court, and players’ uniforms featured Breonna Taylor’s name.