Gen Z Largely Believes Climate Change Is Inevitable, Though Roughly Half Think It Can Be Slowed

About a quarter of Gen Zers say humans can stop climate change, while fewer than 1 in 10 think it cannot be stopped or slowed 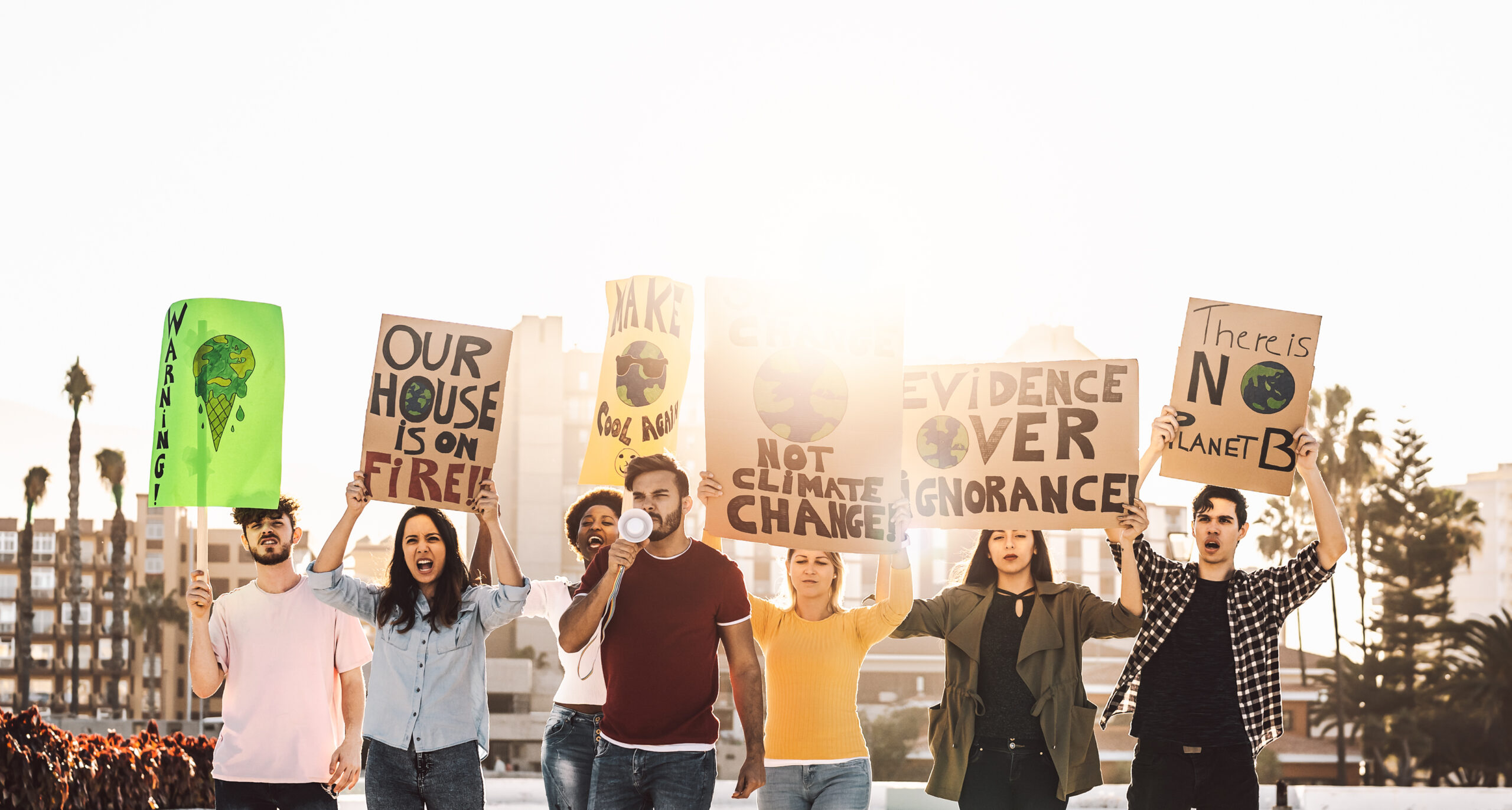 According to new Morning Consult polling, 49 percent of Generation Z members believe humans can slow down climate change but not stop it. (Getty Images)
By Lisa Martine Jenkins

The youngest generation harbors few illusions that climate change has an easy fix, with most saying that its progression is inevitable, new Morning Consult data shows.

The survey of members of Generation Z showed that 26 percent think humans can stop climate change in its tracks. And roughly half (49 percent) of those surveyed believe that the phenomenon can be slowed (but not stopped), with just 8 percent saying conditions have spiraled beyond our ability to rein them in.

And — perhaps speaking to the fact that the youngest of this group never lived in a world before 2006’s “An Inconvenient Truth” ushered in an era of documentaries and activists fixated on educating the public — the share of respondents who believe climate change is not happening at all is just 2 percent, within the margin of error for the poll. 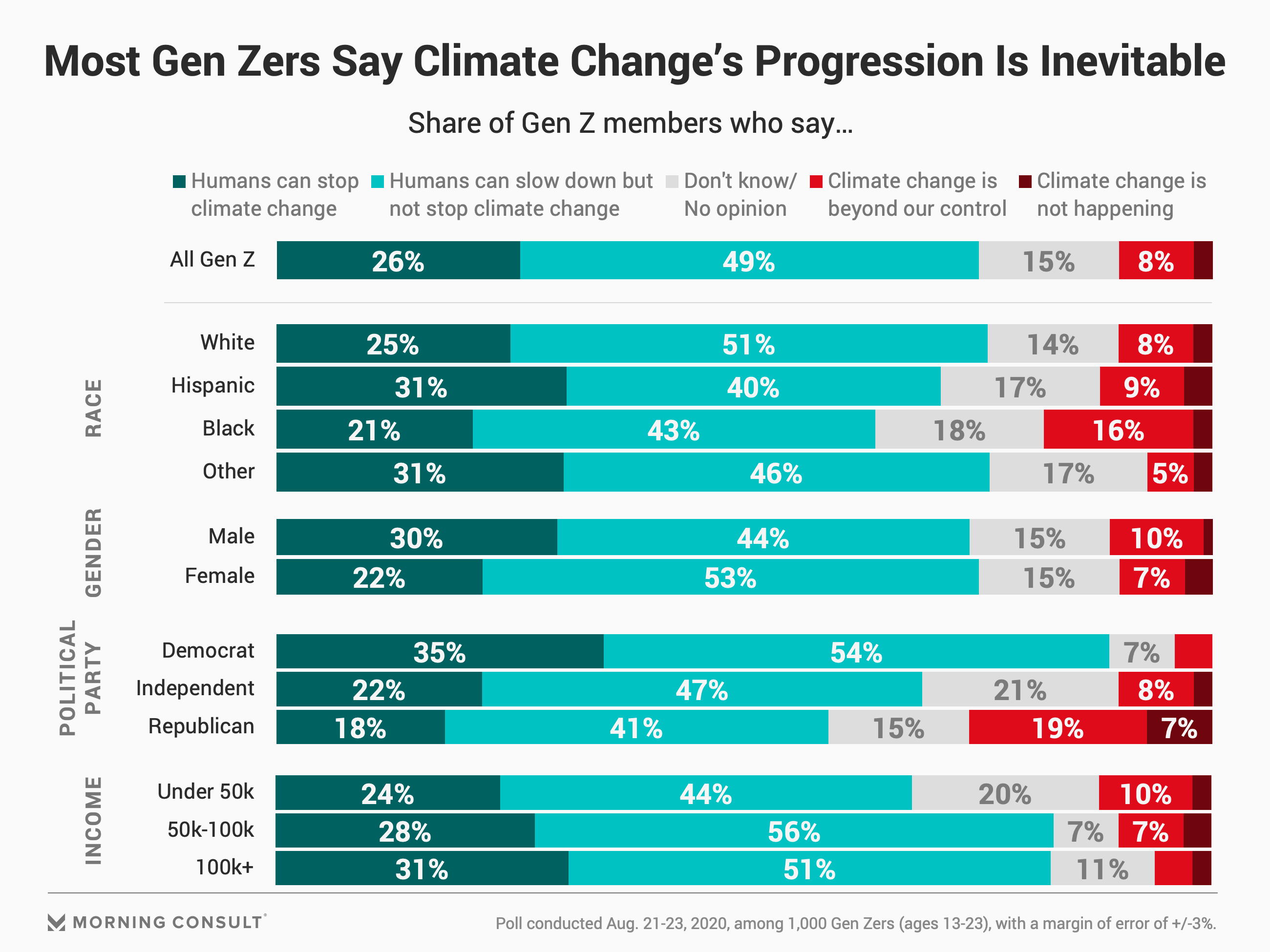 Gen Z expresses concern about climate at statistically the same rate as the general population, with 73 percent saying they are “very” or “somewhat” concerned about the impact of climate change on the environment. In an Aug. 24-27 poll, 72 percent of adults in the general population said the same.

While many of the poll’s respondents are not yet able to vote, as the generation that has given the world activists such as Greta Thunberg and Xiye Bastida comes of age, its values will be of increasing relevance to policymakers. And while the inevitability of climate change is a view shared by most of the generation across all demographics, some are more confident about solutions than others.

Black respondents were more likely than those of other races to say that climate change is beyond our control, at 16 percent.

And Republicans were more likely than Democrats both to say that climate change is not happening (7 percent) and that it is beyond our control (19 percent) than their Democratic counterparts (zero percent and 4 percent, respectively).

For the small share who believes climate change is beyond our control, Morning Consult asked an open-ended question about the respondents’ main reason for thinking so. Their answers tended to cluster around a few central ideas.

A little more than a third responded that climate change is a natural phenomenon, and that nature’s whims are not humanity’s to control. For instance, one Gen Zer said, “We are only a small component of the system. That’s not to say we’re not important but our impact on shifting climates are negligible.” A smaller subgroup, closer to 8 percent, attributed climate change to God, similarly expressing the sentiment that humans do not have the control.

And roughly a quarter lamented human fallibility more broadly, denigrating society’s lack of collective action or saying simply that we have gone too far to walk back the phenomenon. This group mentioned factors such as the population “increasing exponentially,” a reluctance to give up “things that make our lives easier” and even capitalism itself: “humans love money and you do anything to obtain money.”

And one particularly concise respondent summed it up even more ominously: “Slowly the world is going to chaos.”

But all is not cynicism. When Gen Zers do look to the future, it seems that participating in sectors whose emissions contribute to climate change holds little appeal. When asked about their interest in pursuing a career in various sectors of the energy industry, respondents were most interested in solar and wind energy, at 50 and 43 percent, respectively. 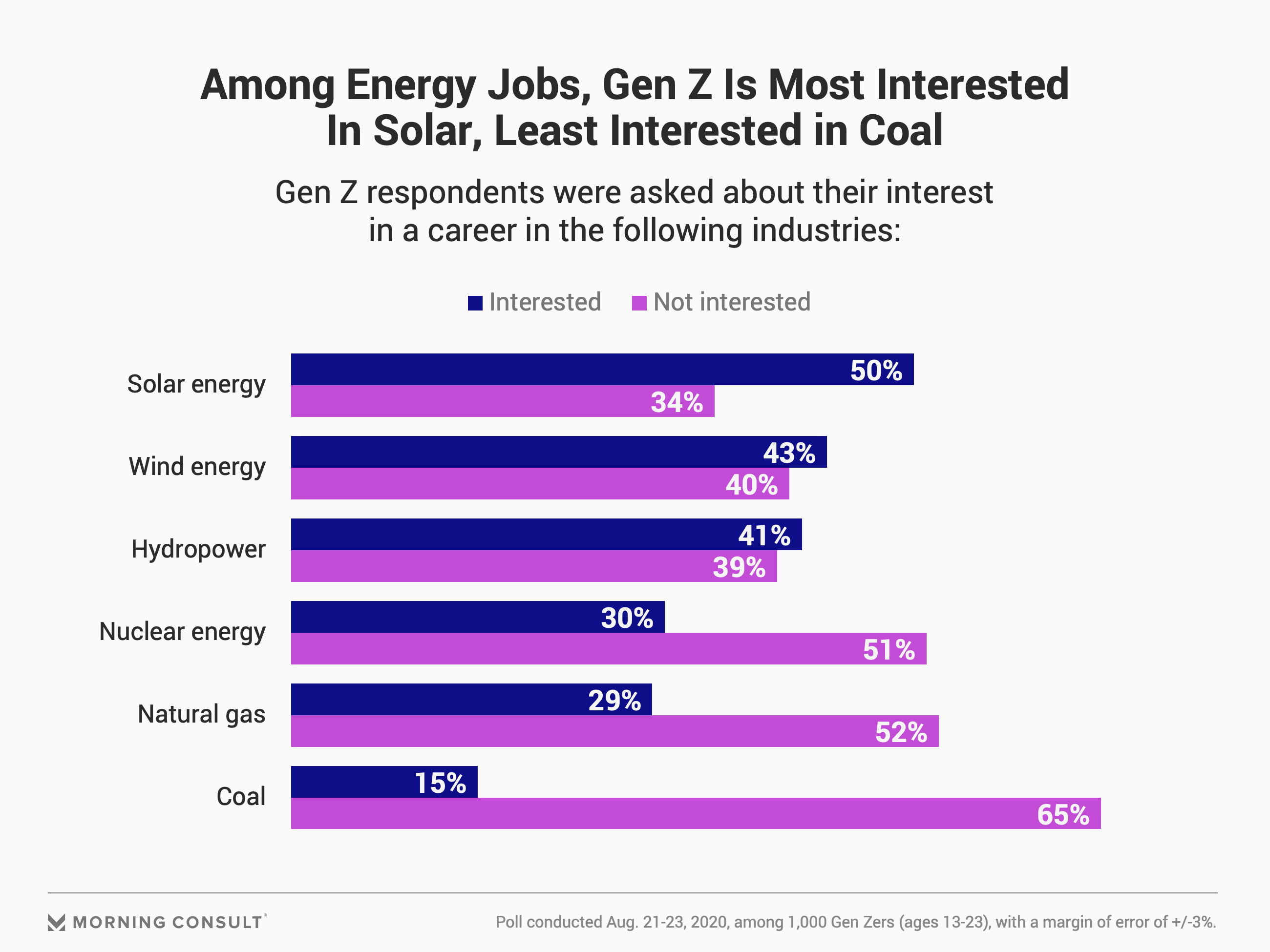 Fifteen percent of Gen Zers, meanwhile, expressed interest in a career in coal, with 65 percent saying they were not interested. The natural gas sector — which proponents have long touted as facilitating the economy’s transition to more renewable energy — was also unpopular, with 29 percent interested and 52 percent not interested. This is consistent with the industry’s own polling in 2017, which has prompted concern from energy executives about how to recruit new talent in the coming decades.

And while nuclear energy has similarly been championed as playing a crucial role in the transition, the sector proved statistically as unpopular as natural gas.