Ahead of Kickoff, NFL Fan Support for Moving Forward With Season Amid Pandemic Increases 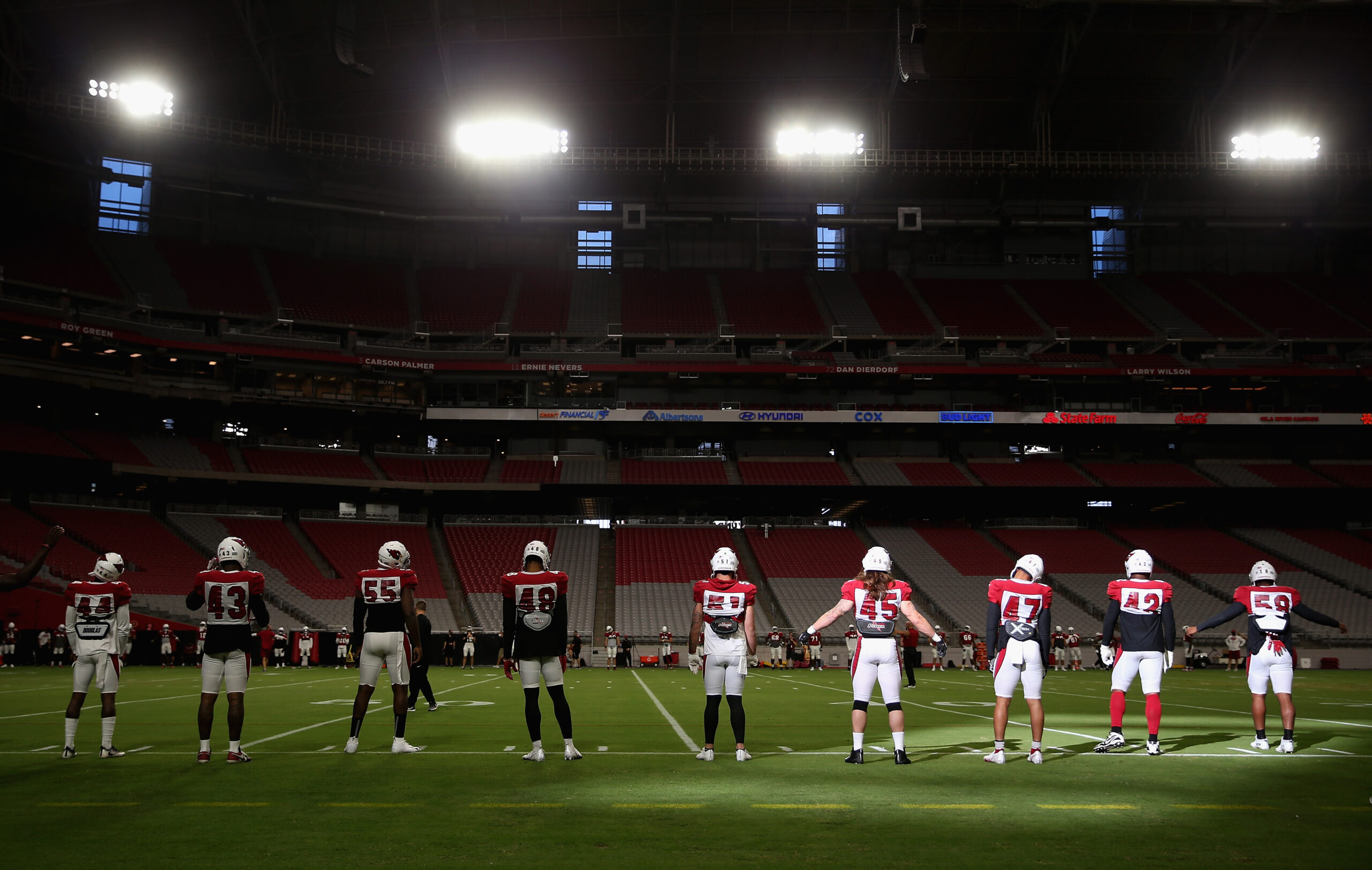 The Arizona Cardinals warm-up during a NFL team training camp at University of State Farm Stadium on August 17, 2020 in Glendale, Arizona. A recent Morning Consult poll shows that 35 percent of NFL fans say the league should postpone or cancel the season. (Photo by Christian Petersen/Getty Images)
By Alex Silverman

With the 2020 NFL season just days away, fans are shedding past misgivings and warming up to the idea of football being played amid the coronavirus pandemic. 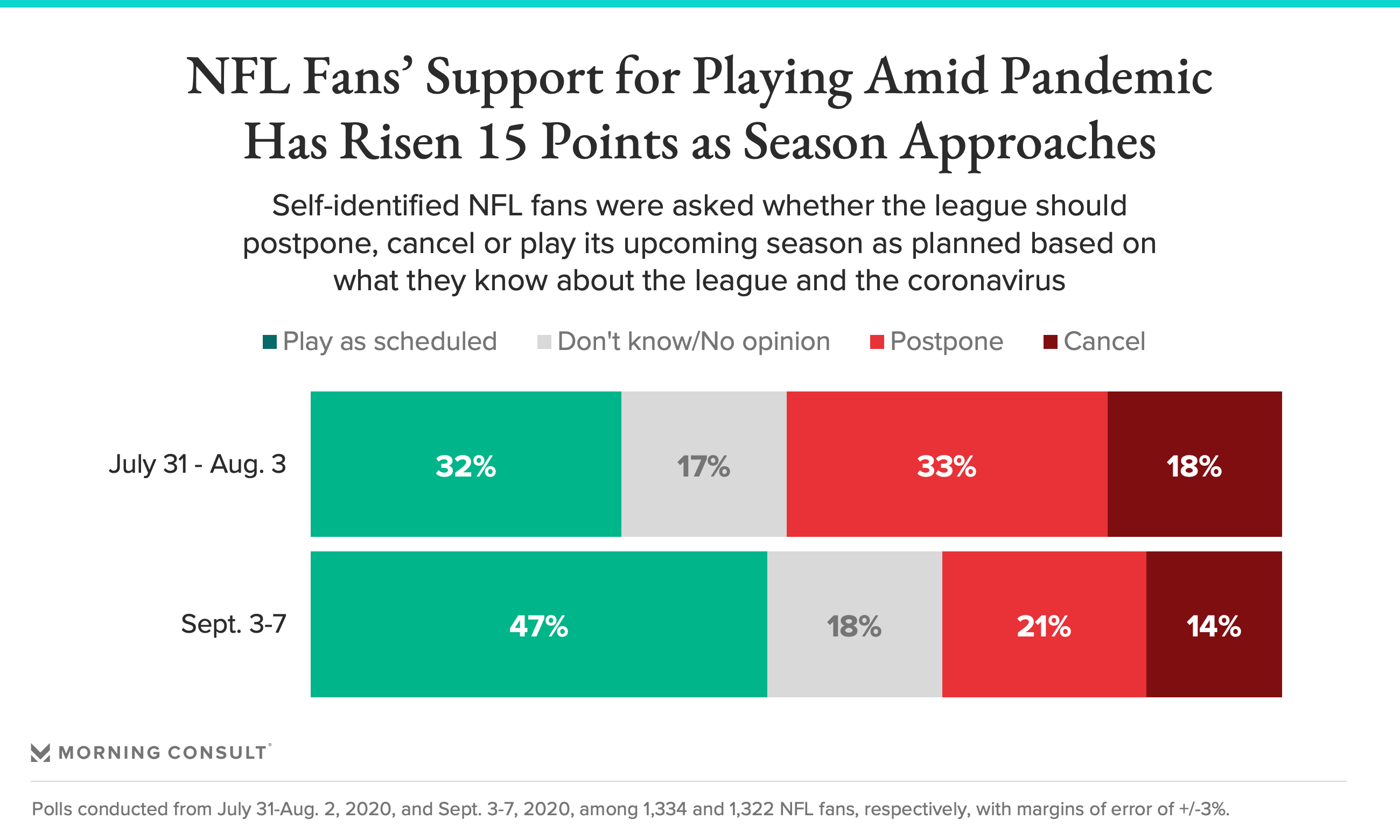 In a Morning Consult survey conducted Sept. 3-7, 47 percent of NFL fans said they believe the league should play its 2020 season as scheduled. That figure increased significantly from a July 31-Aug. 2 poll in which only 32 percent of fans said the league should begin its upcoming season on Sept. 10. The share of fans calling for the season to be postponed or canceled decreased from 51 percent in the earlier poll to 35 percent in the new survey.

Among all U.S. adults, there is slightly more support for canceling or postponing the season (39 percent) than playing as scheduled (35 percent), but the gap has narrowed from 29 percentage points in the July 31-Aug. 2 poll to just 4 points in the more recent survey. NFL fans who identify as Republicans overwhelmingly support the league kicking off its season this week (62 percent), while Democratic NFL fans (39 percent) are split almost evenly.

Six teams — the Kansas City Chiefs, Dallas Cowboys, Miami Dolphins, Indianapolis Colts, Jacksonville Jaguars and Cleveland Browns — plan to begin their home schedules with fans in attendance, and several other teams will revisit the possibility of hosting spectators throughout the season. The number of fans allowed varies by team, with announced limits so far ranging from 3.7 percent of capacity in Indianapolis to approximately 25 percent in Jacksonville. 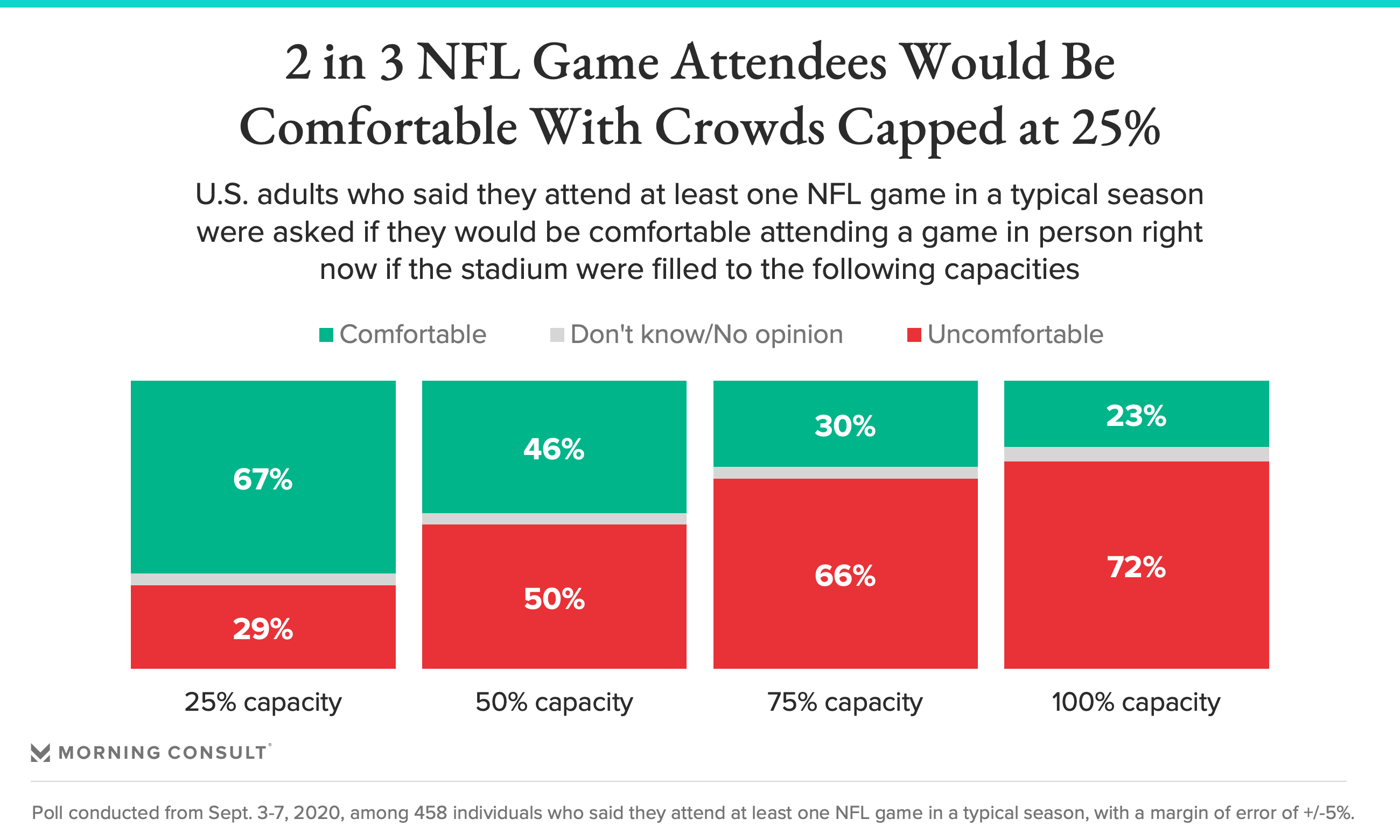 Two-thirds of adults who attend at least one NFL game during a typical season said in this month’s survey that they would be comfortable heading to their local stadium under current circumstances if capacity is limited to 25 percent. If the capacity were increased to 50 percent, however, fewer than half of regular attendees would be comfortable attending. Comfort is even scarcer in scenarios where the capacity limit is raised to 75 percent or 100 percent.

The margin of error among the 1,322 NFL fans in the Sept. 3-7 poll is 3 percentage points, while the group of 458 regular attendees of NFL games carries a 5-point margin of error.