Nuclear Energy Among the Least Popular Sources of Power in the U.S., Polling Shows

According to a new Morning Consult poll, 33 percent of U.S. adults believe the United States should keep current nuclear plants running but not construct any new facilities. (Getty Images)
By Lisa Martine Jenkins

Nuclear energy has an image problem, despite advocates pushing its development as a crucial piece of decarbonizing the U.S. energy sector and combating climate change. 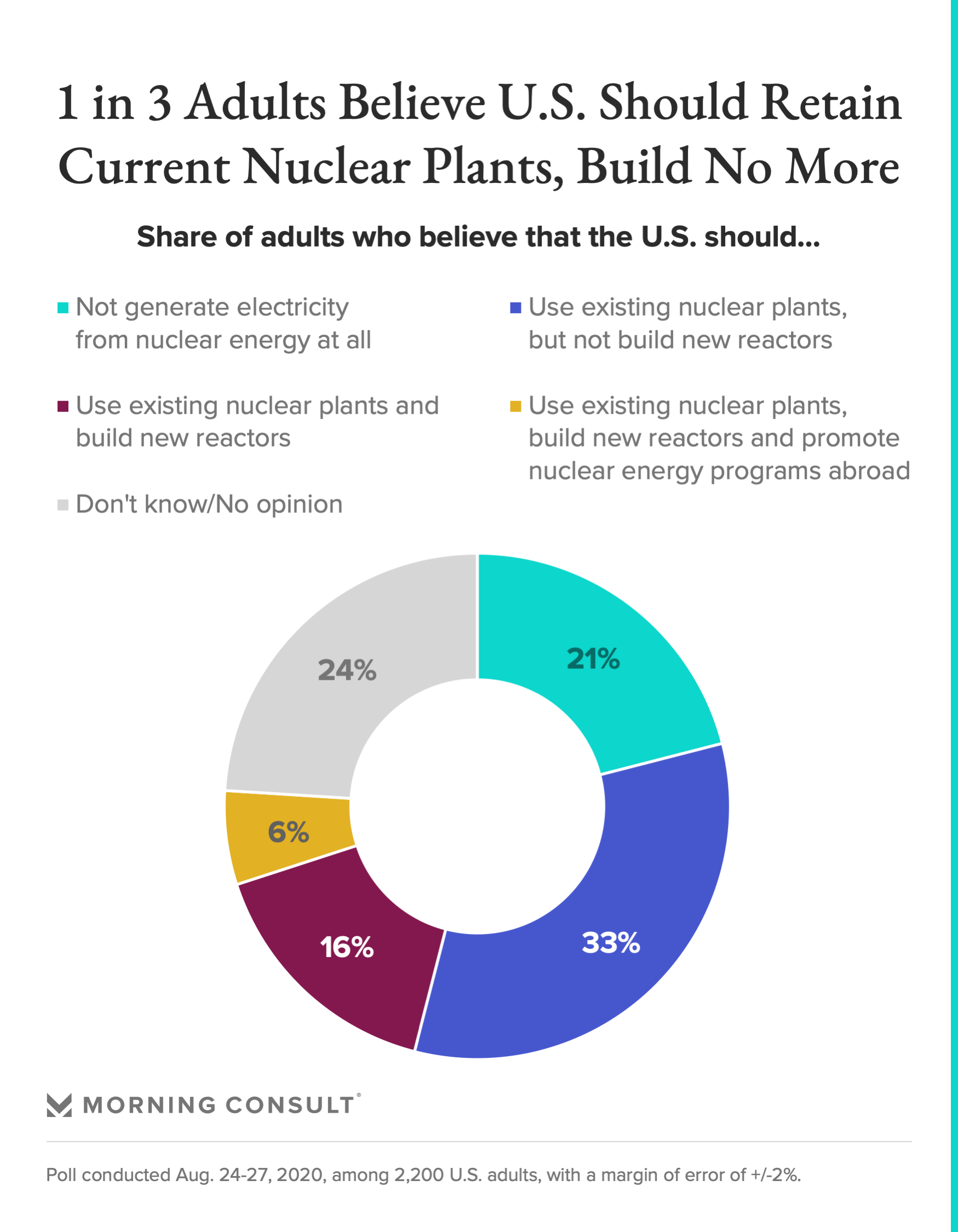 But new Morning Consult data shows that 21 percent of U.S. adults believe that the country should both stop constructing new nuclear energy facilities and halt current production, while 33 percent agree that new construction should be stopped but think that existing sites should continue producing energy.

The survey results come as the Trump administration pushes the development of nuclear energy both domestically and internationally, investing especially in the development of advanced technology in order to speed nuclear’s adoption amid carbon emission reduction goals coming due.

And Democratic presidential nominee Joe Biden has also expressed interest in developing advanced technology and leveraging existing nuclear capabilities as part of his wider energy plan released in June. (When contacted by Morning Consult, the Biden campaign did not provide information on the former vice president’s views on nuclear beyond what is included in the publicly available plan.)

And while the popular progressive platform the Green New Deal makes no specific mention of nuclear energy, one of its sponsors, Rep. Alexandria Ocasio-Cortez (D-N.Y.), said last year that it “leaves the door open on nuclear.” 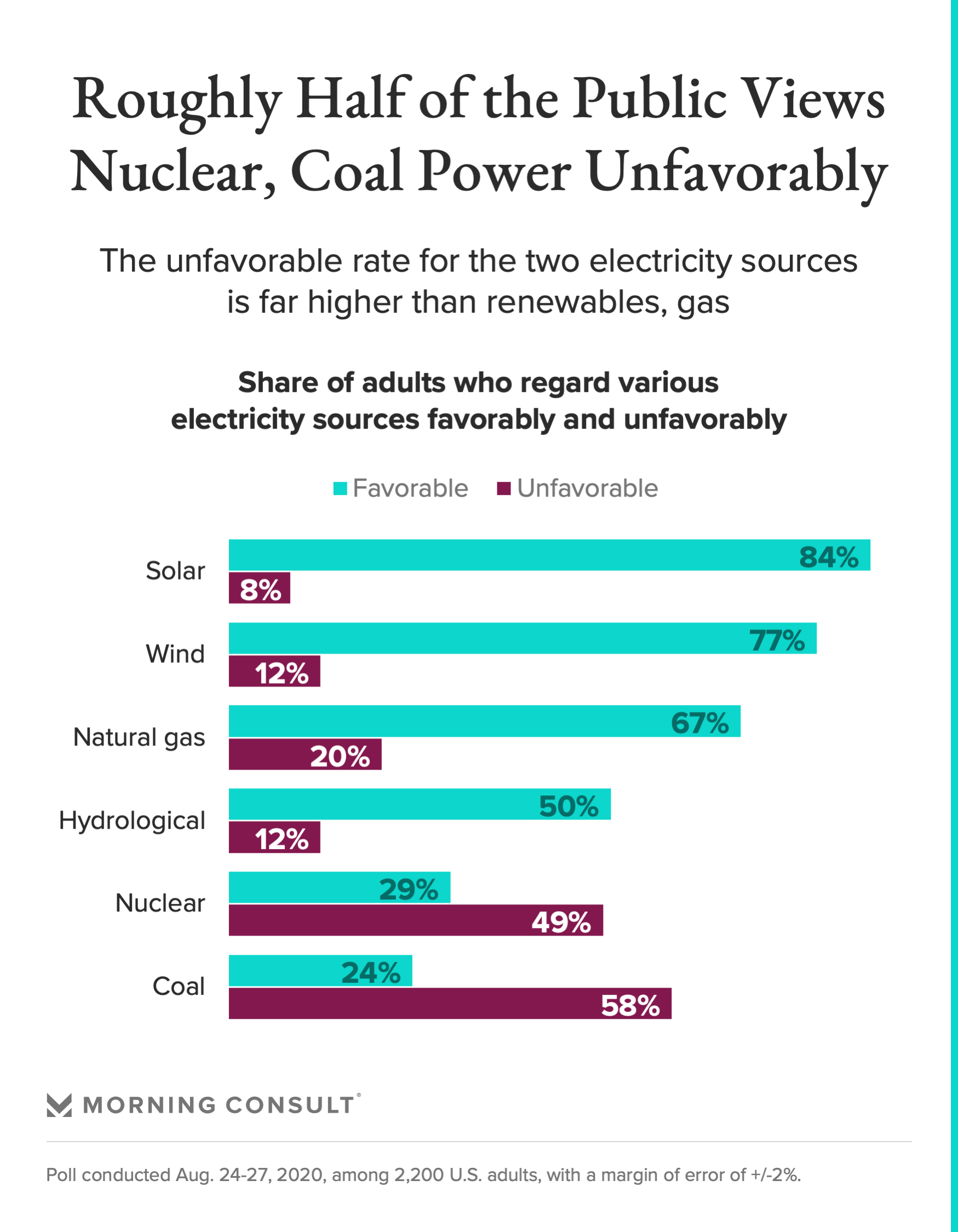 But even with its political support, when compared with other energy sources nuclear seems to have a bad rap among the general public. As compared with a number of energy sources, coal was the only option respondents regarded less favorably than nuclear, with 24 percent viewing coal favorably and 58 percent unfavorably.

Nuclear energy’s net favorability — the favorable share minus the unfavorable share — is similarly underwater, at minus 20 points; this is nearly 70 points below that of natural gas, a fossil fuel whose emissions contribute to climate change. Zero-emission sources such as solar and wind topped the list, with net favorabilities of 76 and 65 points, respectively.

And despite the fact that nuclear energy also emits no carbon, the respondents who reported they were concerned about climate change view nuclear slightly less favorably than the general public, at 55 percent unfavorable and 27 percent favorable.

This hierarchy of preferred power sources generally tracks with the results of another question, asking respondents which source they would choose if they had influence over where their utility company got the power to run their house or apartment. Solar was by far the most popular, at 44 percent, followed by natural gas (18 percent), wind (10 percent), nuclear (4 percent), hydrological (3 percent) and coal (1 percent). Nineteen percent said they had no preference. 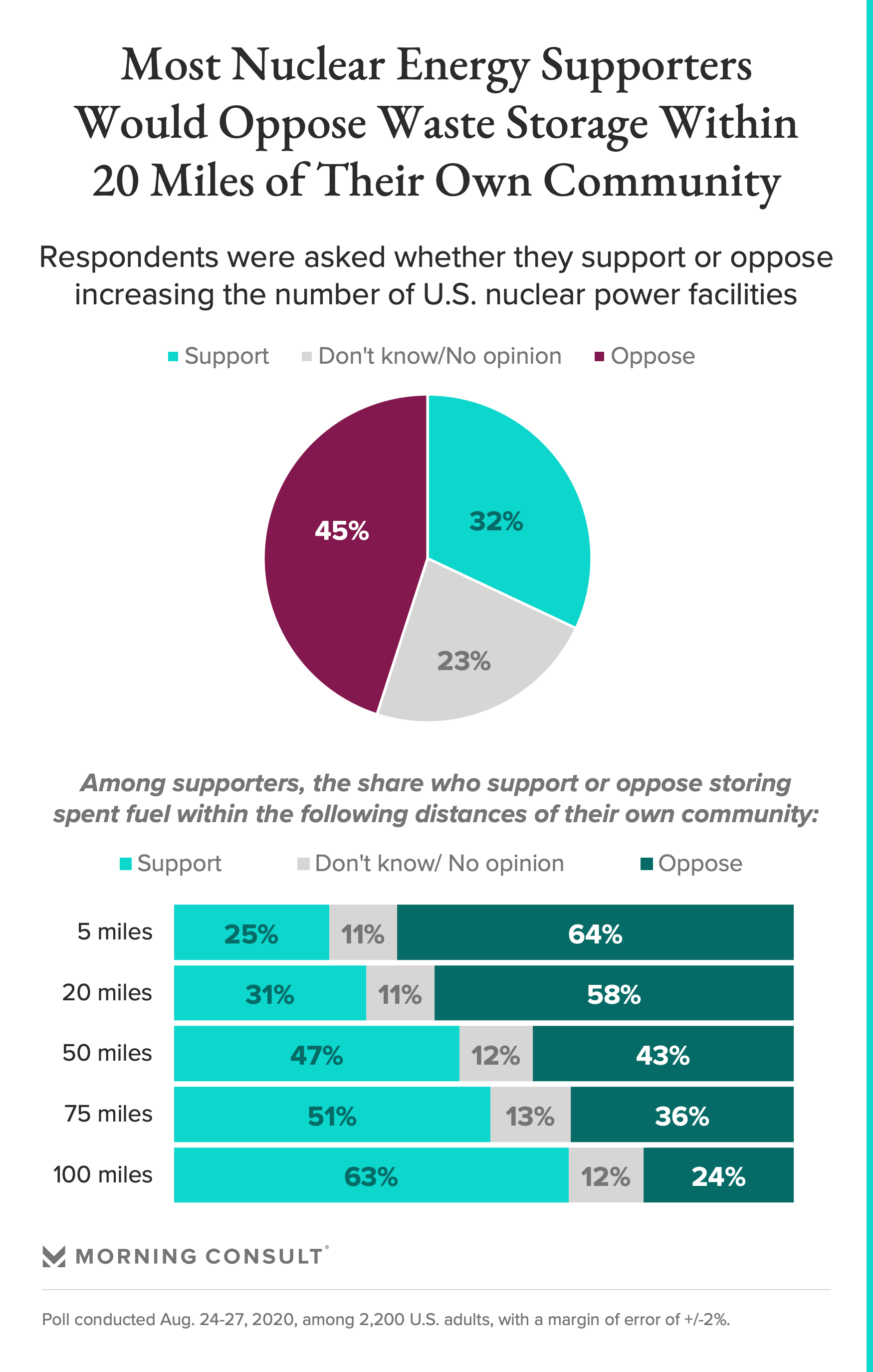 Overall, the survey found that more U.S. adults oppose increasing the number of nuclear facilities in the United States than support doing so, 45 percent to 32 percent. Republicans were more likely than Democrats to favor expanding the use of nuclear energy in the country, at 46 percent and 23 percent, respectively. Twenty-eight percent of independents backed its expansion.

But for the 699 respondents who said they would support increasing the number of nuclear facilities, waste storage seems to be a sticking point — especially when close to home.

Asked whether they’d support storing the spent fuel from nuclear production in the vicinity of their own communities, 50 miles is the minimum distance that garners more support (47 percent) than opposition (43 percent) — though the margin of error for this group is 4 points. Sixty-three percent would support storing the spent fuel within 100 miles, while 25 percent would feel the same about storing it within 5 miles.

This is likely bad news for those attempting to license interim storage facilities in New Mexico and Texas, an effort that has seen major pushback from local — and, in New Mexico, largely Indigenous — communities opposed to locating the waste in their vicinity.

The opposition to storage facilities within 50 miles largely held true across demographics.