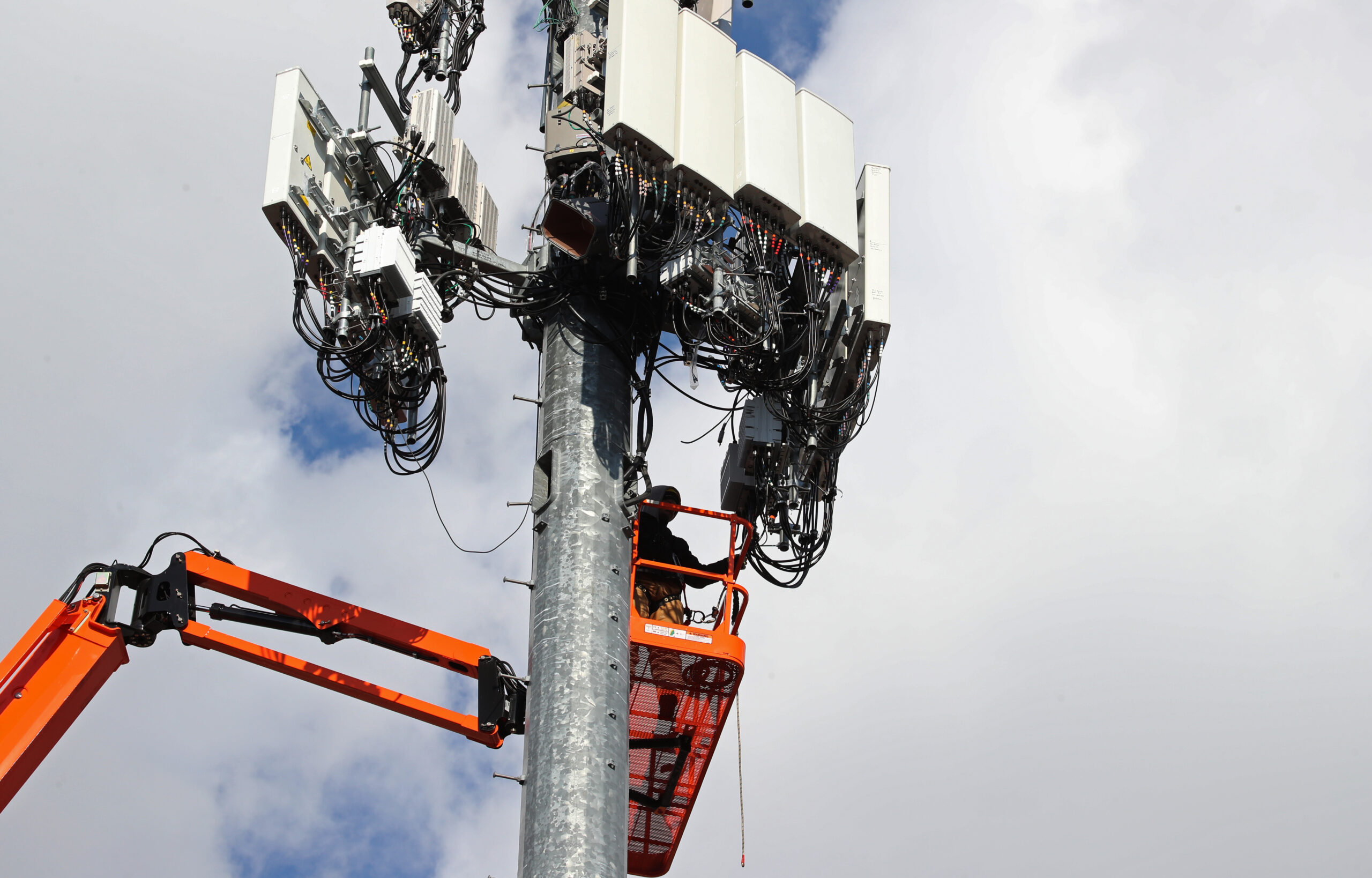 A worker rebuilds a cellular tower with 5G equipment for the Verizon network on Nov. 26, 2019, in Orem, Utah. (George Frey/Getty Images)
By Sam Sabin

The U.S. economy saw 106,000 jobs created from the buildout of 5G technologies between April 2019 and May 2020, according to a new report from the National Spectrum Consortium and the Progressive Policy Institute provided first to Morning Consult. And by 2034, the buildout of 5G technologies will have created an estimated 4.6 million jobs in metro areas across the country, the report states, with Albany, N.Y., Ann Arbor, Mich., and Baltimore among the most well-positioned cities for such jobs.

The report is one of the first clear snapshots of how exactly the latest generation of wireless technologies will contribute to the U.S. economy — since government agencies like the Bureau of Labor Statistics typically lack the ability to measure how many jobs across sectors come from new technologies, including 5G — and the researchers suggest that increased reliance on technology brought on by the coronavirus pandemic could accelerate the creation of these roles. Jobs mentioned in the projections include smart grid analyst, robotics maintenance and telehealth installer, while estimates for 2020 job creation include roles such as a tower climber who assists in 5G buildouts.

“That’s why it’s so important for the U.S. to remain the global leader on 5G, helping to unleash a new wave of job creation in our nation,” Sal D’Itri, chairman of the National Spectrum Consortium, said in a statement. The consortium is a research and development organization that works with the U.S. government on issues related to 5G and other advanced technologies. 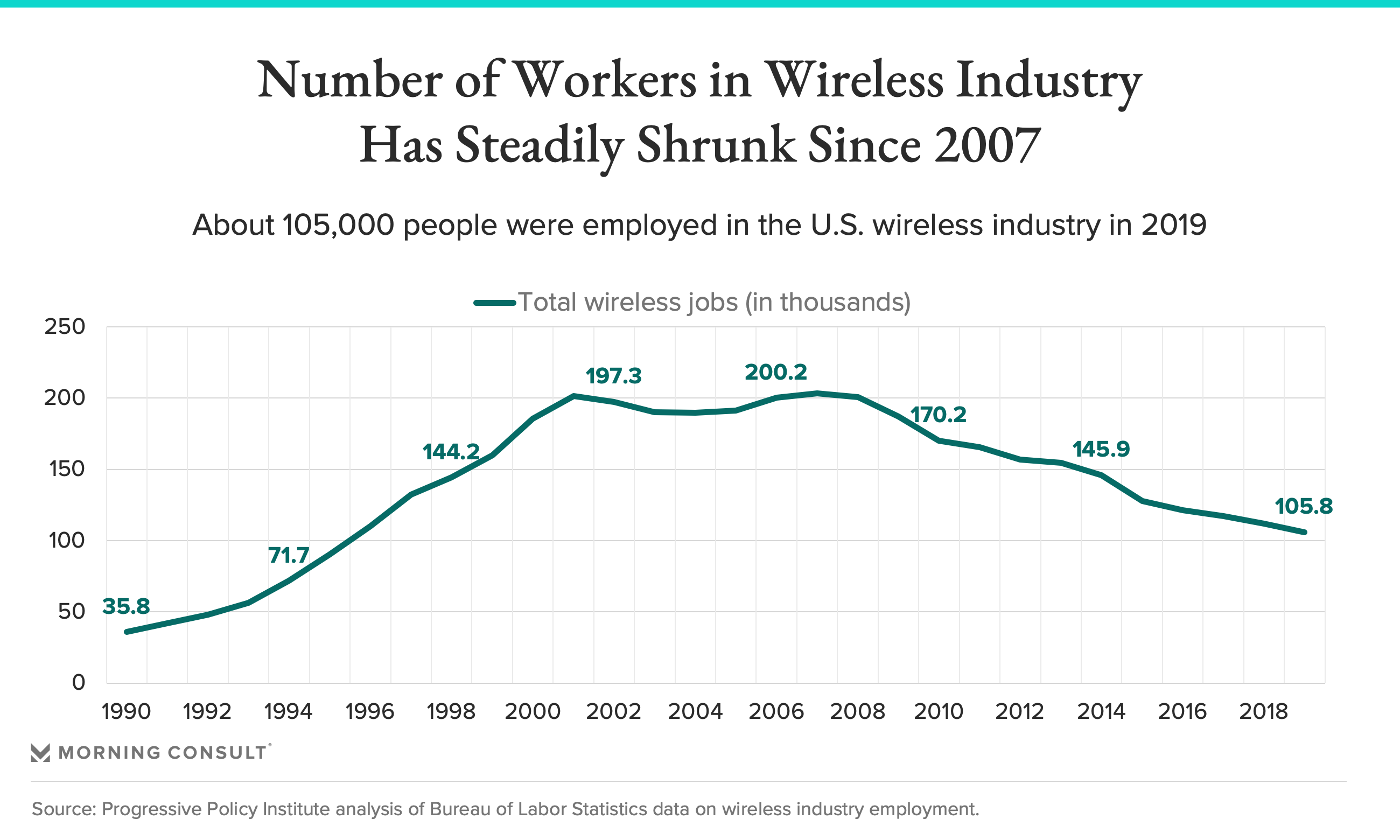 Researchers at public policy think tank Progressive Policy Institute, which the National Spectrum Consortium worked with on the report, relied on a mix of government data from the Bureau of Labor Statistics, as well as publicly available job listings on Indeed.com, to assess the workforce.

As the 5G buildout continues, the report suggests that jobs won’t be limited to the software-based technology jobs that fueled the growth of Silicon Valley, New York and Boston as innovation hubs. Instead, the jobs created will mostly benefit metro areas that rely on both a white- and blue-collar workforce.

Related: 5G Worker Shortages Could Provide Many Americans With Chance to Return to Work

In terms of existing 5G engineering jobs, California-based employers still appear to be leading the pack: In April, 28 percent of the available positions, or 17,700, were based in the state. Another 19 percent of the listings were based in Texas, and 7 percent were located in Colorado.

“The 5G revolution will benefit a far wider set of Americans and regions than previous waves of mobility did,” Dr. Michael Mandel, PPI’s chief economic strategist and a co-author of the report, said in a statement.

However, telecommunications and wireless industry groups have long worried that the United States lacks the skilled workforce needed to fill the number of jobs open currently to build out 5G technologies — although high unemployment numbers caused by the coronavirus pandemic could change that.

Based on the report’s findings, the National Spectrum Consortium said it’s imperative that Congress and federal agencies pursue policies that free up additional spectrum for broadband and related applications, invest in 5G technology development and fund wireless workforce training programs.