Gen Z Is Here to Save Halloween

While older generations are reporting fewer and smaller planned parties compared to 2019, Gen Z adults are bucking the trend

Halloween masks are offered for sale at Fantasy Costumes on Oct. 19, 2016, in Chicago. Forty-one percent of adults from the youngest generation said they went to a Halloween party last year, and a similar share (37 percent) said they plan to do the same this year. (Scott Olson/Getty Images)
By Alyssa Meyers

This Halloween, parties are likely to be smaller and trick-or-treaters more scarce, but in a bright spot for the Halloween industry, young people are just as enthusiastic about celebrating and dressing up as ever. 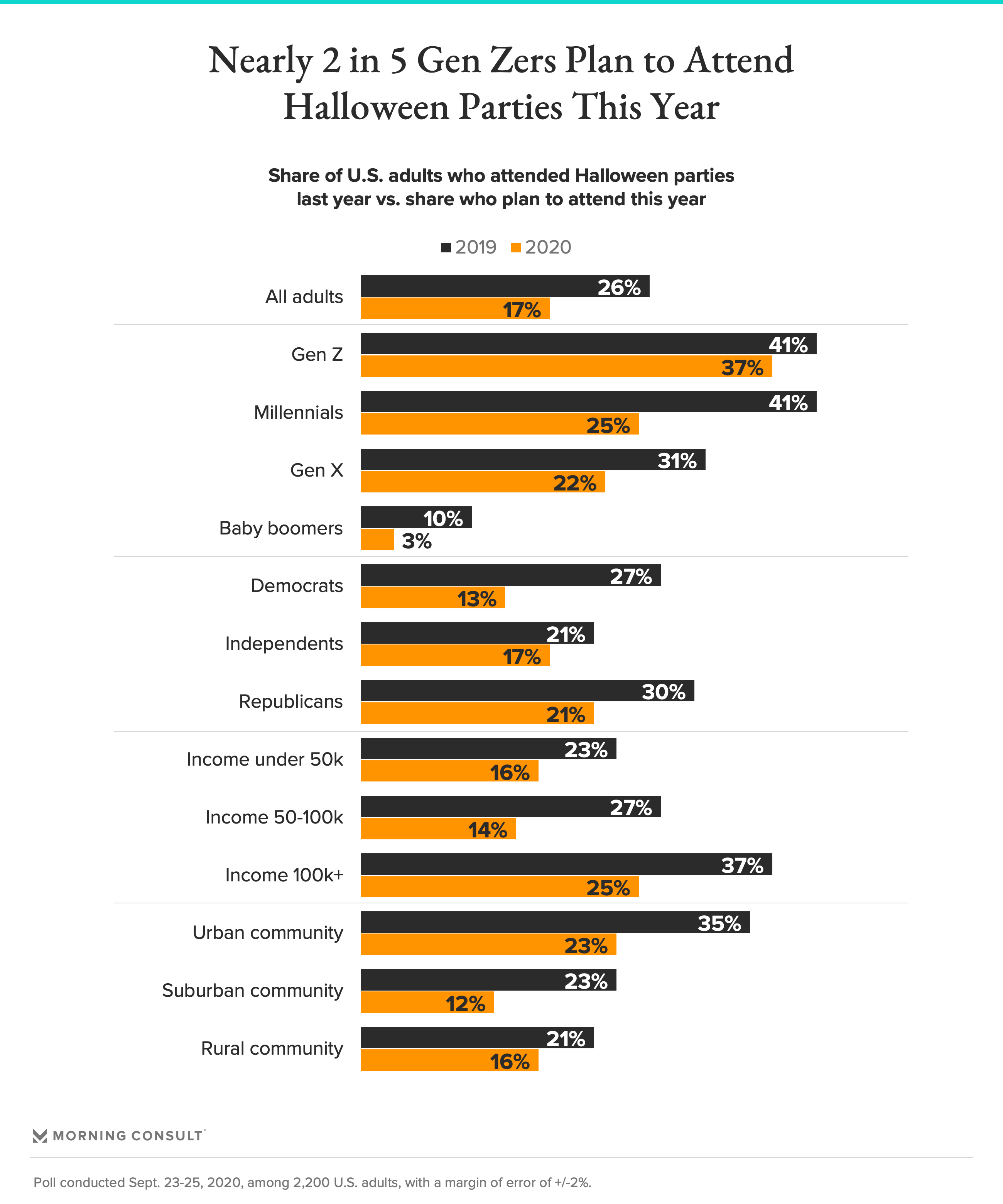 Fewer adults across several key demographics, including generation, political party affiliation, income bracket and community, said they plan to attend Halloween parties this year compared to the share who said they attended last year, with one important exception: Generation Z.

Forty-one percent of adults from the youngest generation said they went to a Halloween party last year, and a similar share (37 percent) said they plan to do the same this year, according to polling from Morning Consult conducted Sept. 23-25 among 2,200 U.S. adults.

Larger shares of adults from older generations said they’ll be sitting out Halloween parties this year. One-quarter of millennials, for instance, said they plan to go to a party this Halloween, compared with 41 percent who did last year. 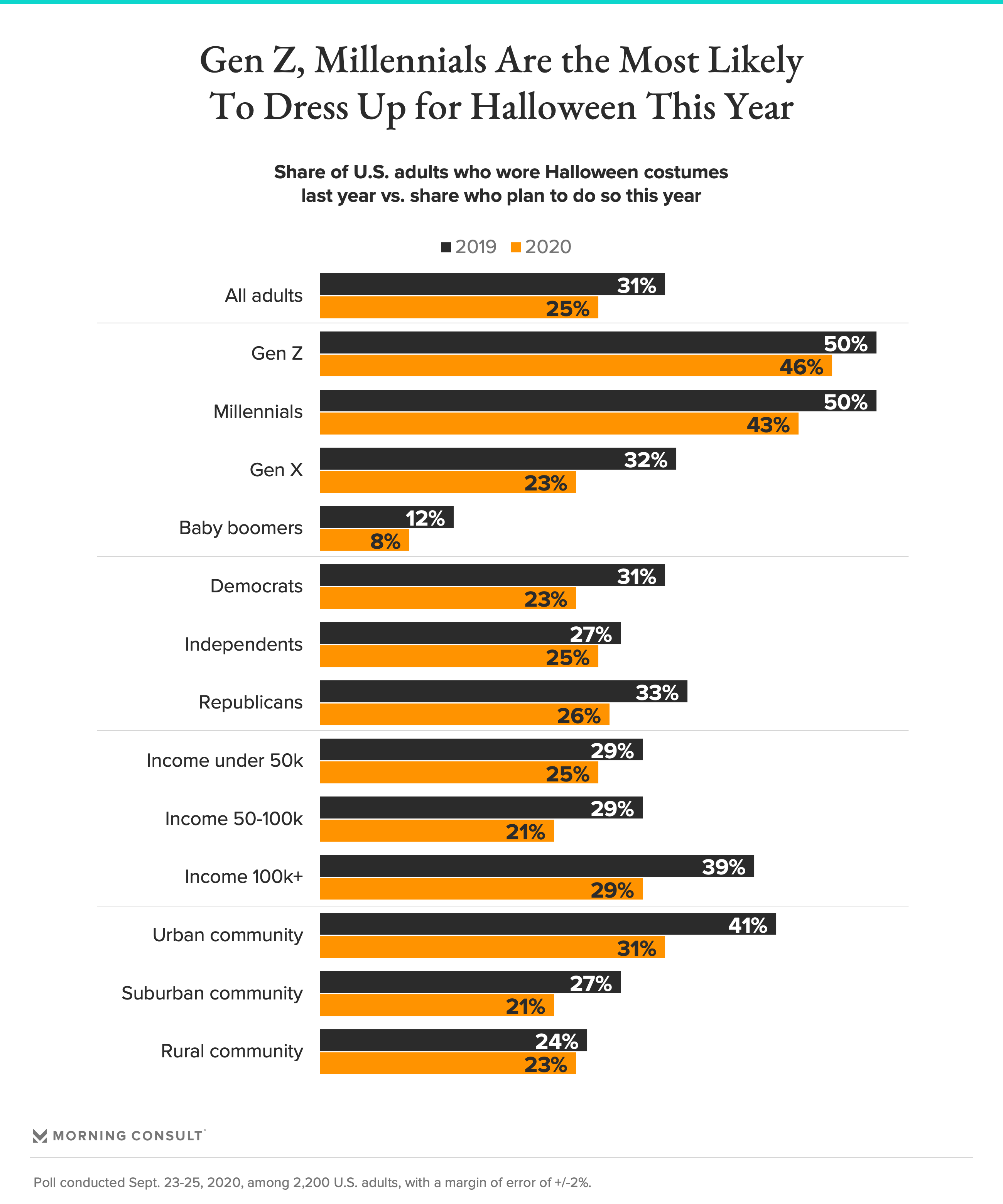 While Americans might not be comfortable attending parties in droves this year, that doesn’t mean they won’t be dressing up to commemorate what might be the scariest Halloween yet, at least for retailers.

Thirty-one percent of adults said they wore a Halloween costume last year, and 25 percent said they won’t be dissuaded from doing so this year, representing a slight drop in enthusiasm from last year. But yet again, Gen Zers stand apart in their eagerness to stick to Halloween traditions.

Half of the up-and-coming generation got dressed up for Halloween last year, and 46 percent said there’s nothing stopping them from doing so again this year. Younger adults typically spend less on the holiday compared to other age groups, according to the National Retail Federation: Those ages 18-24 said they’d spend an average of $99.48 this year, compared to $118.22 for those ages 25-34 and $126.15 for those ages 35-44.

Related: Americans Are Spooked About Celebrating Halloween, and That Should Scare Retailers

Americans are expected to spend an average of $29.90 on costumes this year, per NRF, a slight drop from the $31.05 spent in 2019. Total expected spending on Halloween costumes is forecast to drop from $3.2 billion last year to $2.6 billion this year.

With the world still reeling from the coronavirus pandemic, superheroes could prove to be a common sight on the streets of neighborhoods in the United States this year. Morning Consult asked adults who said they planned to dress up this year what they had in mind for their costumes, and several suggested they’d harness their inner hero — or villain — with costumes, including Batman, Black Panther, Wonder Woman, Spider-Man, Harley Quinn and the Joker.

Public figures might also crop up at doorsteps looking for treats: A few respondents mentioned the late Supreme Court Justice Ruth Bader Ginsburg and Dr. Anthony Fauci, the top U.S. official on infectious diseases, as potential costumes. But generally, mentions of costumes related to current events, such the country’s tumultuous election or the coronavirus, were few and far between.