46% of voters back Trump’s nominee, up 9 points from late last month

Judge Amy Coney Barrett meets with Sen. Deb Fischer (R-Neb.) at the Capitol on Oct. 1. As Senate Republicans push forward with a swift confirmation process aimed at elevating her to the high court before the November elections, polling shows public opinion on the matter is trending their way. (Olivier Douliery-Pool/Getty Images)
By Eli Yokley

Nearly half (46 percent) of voters in an Oct. 2-4 Morning Consult/Politico poll said the Senate should confirm Barrett — up 9 percentage points since President Donald Trump announced her nomination on Sept. 26 — as more voters say the chamber should consider her elevation to the high court as soon as possible, regardless of who wins next month’s election. 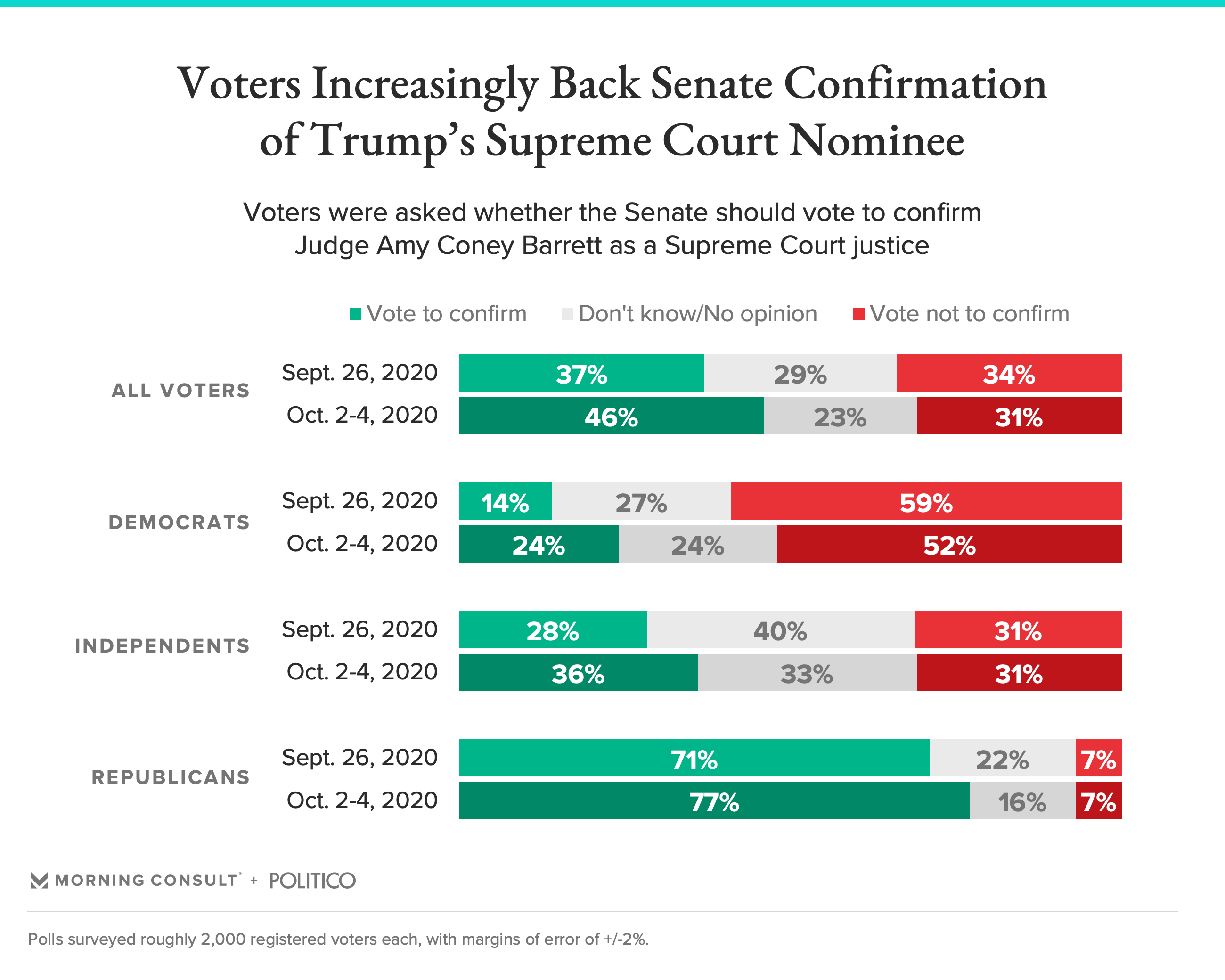 The share of voters who said the Senate should reject her nomination dropped 3 points, to 31 percent, from polling conducted on Sept. 26. Both polls were conducted among roughly 2,000 registered voters each, with 2-point margins of error.

Senate Democrats have pushed to halt proceedings until the dust settles on the presidential contest in November, citing a precedent set by Senate Majority Leader Mitch McConnell (R-Ky.) in 2016 when he refused to consider the nomination of Judge Merrick Garland, then-President Barack Obama’s pick to replace Justice Antonin Scalia, who died in February 2016. But along with sturdier support for Barrett’s confirmation, voters are also increasingly more likely to say the Senate should move quickly on her nomination.

Forty-three percent said the Senate should vote on Barrett’s confirmation as soon as possible, regardless of the 2020 election’s winner, up 4 points since after Trump’s announcement, while 37 percent said the chamber should only vote if Trump wins the 2020 presidential election, down 3 points.

The numbers mark an even larger shift from polling conducted before Barrett’s nomination, when half of voters said the winner of the presidential election should get to pick Ruth Bader Ginsburg’s replacement and 37 percent said Trump should get to make the pick, regardless of the outcome in November. That poll did not mention Barrett’s name.

Even Democratic voters have softened their opposition to Barrett’s confirmation: The latest survey found 59 percent said the Senate should wait to see who wins the election, compared with 79 percent who said in the wake of Ginsburg’s death that the election winner should pick the next justice.

It’s not as if Barrett’s nomination is flying completely under the radar. Though 1 in 5 voters initially heard “a lot” about it, that share had doubled just a few days later following the first presidential debate. (A similar share reported hearing a lot about The New York Times’ story on Trump’s tax returns.) Plus, a poll that fielded during the weekend her nomination was announced found 45 percent of voters had heard a lot about the Senate GOP’s push for a confirmation before Nov. 3.

But it has been a crowded news cycle, and the highest-profile stories regarding her nomination have focused on how her announcement events — indoor and outdoor affairs on the White House campus — may have led to an outbreak of COVID-19 that breached the highest levels of American government, potentially muting the salience of any details about the confirmation fight or her judicial positions that Democrats are hoping to use in building public opposition to her ascent to the nation’s highest court.

Democrats — including the party’s vice presidential nominee and Senate Judiciary Committee member Kamala Harris of California — will likely get a new opportunity to lay out the case against Barrett on Oct. 12. Sen. Lindsey Graham (R-S.C.), who chairs the panel, has insisted it will take up Barrett’s confirmation, even though two of its members, Sens. Mike Lee of Utah and Thom Tillis of North Carolina, tested positive for the virus last week.

It’s a move at odds with a majority (54 percent) of voters — including 75 percent of Democrats, 46 percent of independents and 30 percent of Republicans — who said the Senate should definitely or probably delay hearings following Trump’s diagnosis. Another 35 percent said it should not, driven by Republican opposition, according to another Morning Consult/Politico survey conducted among 892 registered voters on Monday night.