Seven months into the coronavirus pandemic, uncertainty is the new normal in professional sports. Among those impacted by the inconsistency are regional sports networks, or RSNs, who are still in the dark about the plans for two of their three key sports in 2021.

Depending on when the NHL and NBA schedule their next seasons, there will almost certainly be more overlap than usual with the MLB season. For many RSNs, this would mean juggling telecasts for the three sports — plus the local MLS and WNBA clubs, in some cases — for several months, as opposed to a few weeks in a normal year.

Three major sports leagues running in parallel for an extended period is undoubtedly more desirable for RSNs than their current situations: With the NBA and NHL uncharacteristically idle this fall, the networks are left scraping together lineups built around second-tier live events and archival content for the rest of 2020.

There are, however, challenges associated with the NBA, NHL and MLB playing at the same time. While it is unlikely to have a material impact on the networks’ near-term bottom line, the overlap could contribute to year-over-year viewership drops for each of the three sports and tougher scheduling decisions.

Regional sports networks pay MLB, NBA and NHL teams for the right to locally air all of their regular-season games that are not designated for a national broadcast. These local telecasts represent the lifeblood of RSNs, which earn some of the highest carriage fees from cable, satellite and streaming services. Distribution accounts for the vast majority of revenue for RSNs, with 2019 SEC filings for Sinclair Broadcast Group Inc. and MSG Networks putting it at around 90 percent. 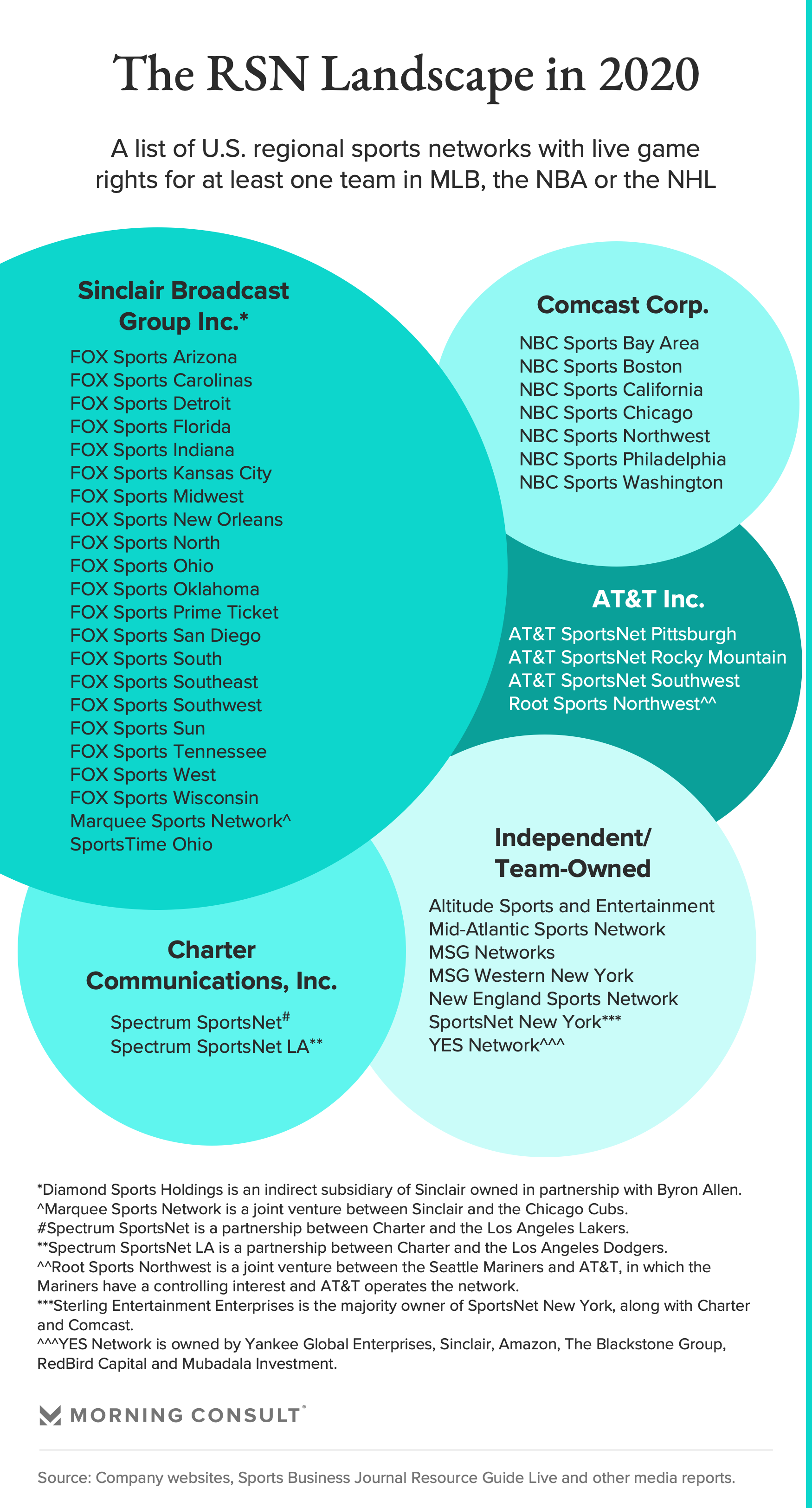 While some markets, such as New York, are home to multiple competing RSNs — each with their own portfolio of local team rights — other markets such as Detroit and Minneapolis have a single RSN that holds the rights for all of the local teams.

The NBA and NHL have yet to put their next seasons on the calendar, although Morning Consult reported earlier this year that the NBA was considering a March-October scenario. While the commissioners of both leagues have said they are targeting January starts, they also want their teams to host fans at their indoor arenas, something that might not be feasible by the start of the year.

The industry has seen the impact of increased competition among live sports at the national level since their return over the summer. The NBA Finals, Stanley Cup Final and U.S. Open in both tennis and golf each suffered significant year-over-year viewership drops, and NFL viewership was down 10 percent this season through Week 4. Several sports media experts, including an executive at a major RSN group, said similar drop-offs could be expected at the local level.

“You’re gonna see some cannibalization of ratings mainly based upon which games are most important,” said Lee Berke, president & CEO of LHB Sports, Entertainment & Media. “Is it a particular pitching matchup, or is it a game that’s impacting the playoff picture? Those games will attract more attention than the others.”

In terms of scheduling, most RSNs have at least one dedicated “overflow” channel for nights when two or more of its teams are playing simultaneously and in many cases work with cable and satellite companies to clear additional space when necessary. While dedicated fans become accustomed to finding these channels, games relegated to these overflow channels can suffer in terms of viewership.

Joe Brown, a former NBC Sports researcher and audience analyst who has since founded JWB3 Media Insights, said the introduction of improved user interfaces that recommend sports content to fans based on their preferences makes channel position less important than it used to be, but estimated the impact of being bumped to an overflow channel could still be a 20 to 30 percent dip in viewership.

“Your most avid fans are going to find it no matter what, but you are going to lose a percentage of your casual fans because it’s in a place that they’re not used to finding it,” Brown said. “And they’re not going to try that hard to find it.”

One staffer for a major-market RSN expressed concern that their network might be forced to pawn off a significant number of live NBA games on local over-the-air stations and push MLS and WNBA games exclusively to the network’s streaming service. He suggested this could have a negative impact on advertising revenue.

There's going to be fewer nights without a game. This can be an incredible position of strength for ad sales during that period.

Several other industry experts said they don’t foresee the extended overlap having a negative impact on ad revenue for most RSNs, and ad sales account for a fraction of what the networks earn from distribution fees. Sinclair, for example, earned $1.1 billion in revenue from its RSN business between its acquisition of 21 Fox Sports-branded RSNs in late August 2019 and the end of the year, more than $1 billion of which was attributable to distribution.

The executive at a major RSN group downplayed the potential for scheduling issues, indicating RSNs, especially those in big markets, are used to dealing with multiple games every night. He didn’t anticipate any of the networks in his group being forced to push live games exclusively to streaming platforms.

Despite the expectation of viewership cannibalization on some nights, several industry insiders see the extended overlap as a chance for RSNs to offer live games on more nights per week and, as a result, possibly increase ad sales revenues.

“There’s going to be fewer nights without a game,” Brown pointed out. “This can be an incredible position of strength for them for ad sales during that period.”

In addition, while some RSN executives are wary of putting games exclusively on their streaming platforms, others identified this as an opportunity for the RSN business to innovate and grow their digital footprint.

“It’s actually an opportunity to bring people into those digital environments,” Brown said. “All of a sudden they say, ‘Hey, you know, I hadn’t downloaded that app before. But I want to watch this game, therefore, I’m going to.’”

The other major consideration for RSNs in 2021 is what the back half of the year will look like. Brown, along with several other insiders, speculated the NHL and NBA will look to have their next seasons finished prior to the Tokyo Olympics or shortly thereafter, which would allow them to return to normal schedules for their 2021-22 seasons. The possibility remains, however, that they could once again end up with a dark period in the fourth quarter of next year.