Palantir, Oracle Leaders Have Had Close Ties to Trump. Their Workers Are Donating More to Biden 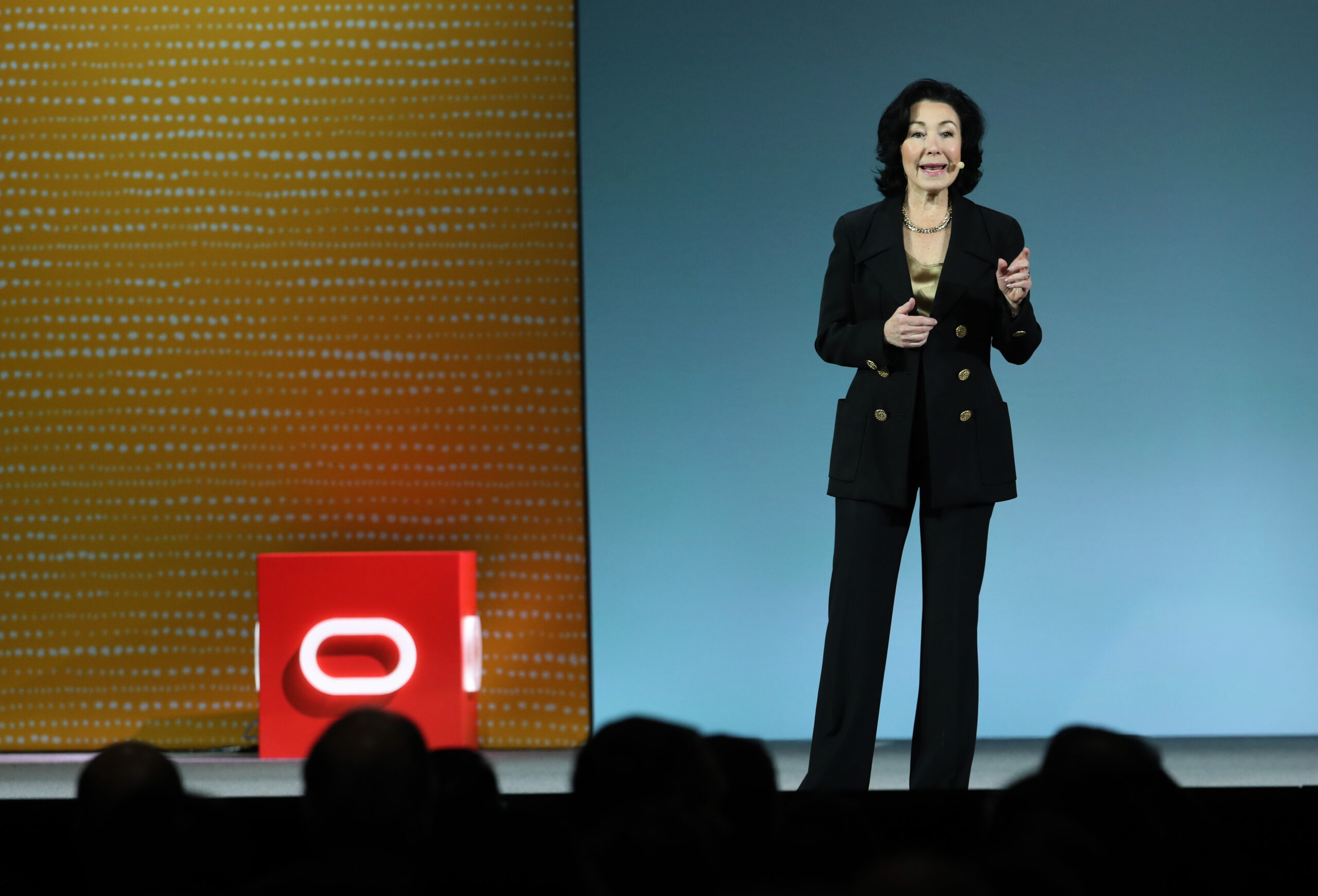 Oracle Chief Executive Safra Catz delivers a keynote address during the 2019 Oracle OpenWorld on Sept. 17, 2019 in San Francisco. Catz donated $5,600 to President Donald Trump’s re-election campaign in May, maxing out the legal limit on individual contributions to a candidate. (Justin Sullivan/Getty Images)
By Sam Sabin

In the past four years, executives and tech leaders tied to Palantir Technologies Inc. and Oracle Corp. have linked themselves to President Donald Trump’s administration — whether by hosting fundraisers for the campaign, intertwining themselves in the White House’s attempts to rein in TikTok or bidding for and winning controversial U.S. Immigration and Customs Enforcement contracts.

But in the lead-up to the 2020 election, the companies’ workforces are putting their dollars behind another for president: former Vice President Joe Biden.

Oracle’s employees have contributed $233,745 to Biden and $80,495 to Trump in the same time period, while Palantir employees have donated $50,877 to Biden — far surpassing the $382 the two employees donated to Trump.

The analysis includes individual contributions donated directly to the candidates and does not account for dollars given to political action committees that might help either candidate. In 2020, the campaigns of both Trump and Biden started filing on a monthly basis, as required by the FEC during an election year.

Since 2016, leadership at both companies have put themselves in a position that most in the tech industry have shied away from: as supporters and advisers to Trump’s White House. And in some respect, it’s worked out. For instance, Oracle reached a tentative agreement in September to become TikTok’s American technology partner as tensions between the United States and China escalated, and Palantir has secured a slew of government contracts in recent months related to the federal COVID-19 response, including one to reportedly create a system to track vaccine manufacturing, distribution and administration.

But those strategies have sparked outrage from internal parties. More than 9,500 Oracle employees signed a petition circulated in February protesting founder Larry Ellison’s fundraiser for Trump’s campaign, and Palantir’s contract with ICE, which has since been renewed until 2022, reportedly caused a rift between employees and the company’s leaders.

Spokespeople at both Palantir and Oracle did not respond to a request for comment.

While tech workforce experts note that it’s common for businesses to have a workforce that doesn’t fall in line with its leaders’ political ideologies or decisions to work with the government, the data shows a possible rift between employees and employers that’s emblematic of worker unrest seen at Alphabet Inc.’s Google and other Silicon Valley companies that’s prompted military contract cancellations and other internal policy shifts. 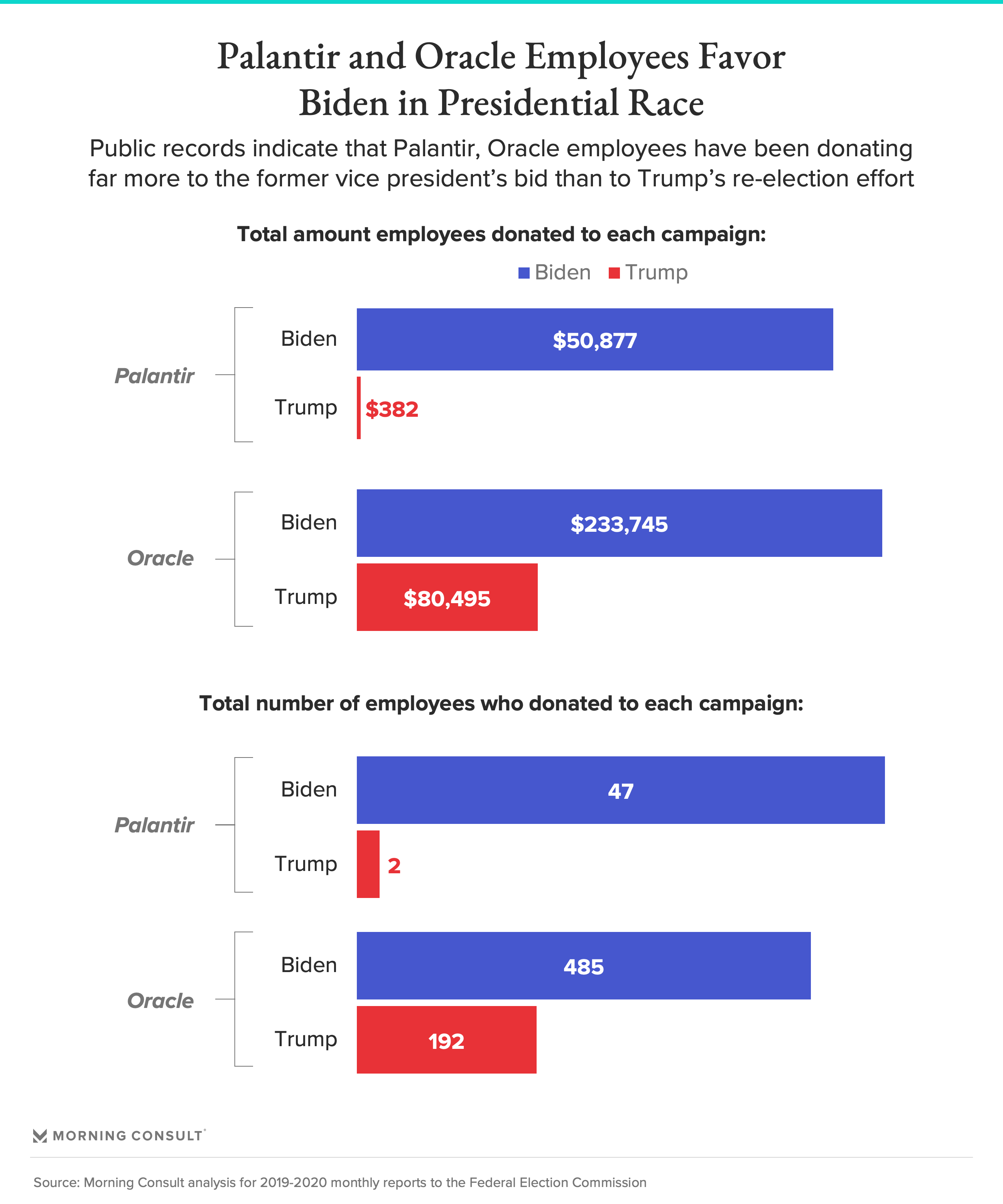 Oracle’s top executive, Safra Catz, has donated heavily to Trump this year. She maxed out the legal limit on individual contributions to a candidate’s campaign in May at $5,600, and in the same month, she also contributed $125,000 to a PAC committed to Trump’s re-election and $35,500 to the Republican National Committee.

Palantir’s executives and key figures have been a bit more quiet in terms of donations, with leaders including Chief Executive Alex Karp and Chief Operating Officer Shyam Sankar donating to a mix of congressional candidates. And despite supporting Trump’s campaign in 2016, Palantir co-founder and chairman Peter Thiel has reportedly decided to stay out of the 2020 presidential election cycle because he feels Trump’s odds of winning are slim.

“In the tech sector, as in most other sectors, most companies aim to serve a wide range of users, rather than appealing only to one political constituency,” Matt Perault, former Facebook Inc. public policy director and current director at Duke University’s Center on Science and Technology Policy, said in an email. “Patagonia won’t refuse to sell a jacket to a climate change denier, despite the views of its executives.”

For Palantir, however, the divide between employees and their employer is a bit different, with the company maintaining an apolitical mission to providing Western democratic governments with the tech it needs, no matter which party is leading, noting in its initial public offering prospectus last month that “if we are going to ask someone to put themselves in harm’s way, we believe that we have a duty to give them what they need to do their job.” Sankar, the COO, also says on his personal website that he believes “politics is about accepting the tradeoffs,” which could indicate that Palantir’s work wouldn’t change no matter who is in the White House.

Jacinta Gonzalez, a senior campaign organizer at Mijente, a grassroots organization that has coordinated protests against tech companies like Palantir that work with ICE, said it’s still important to note that employees are still choosing to work at the company. Those workers still hold undeniable bargaining power.

Google’s decision in 2018 to not renew an Air Force contract following employee pushback on a project using artificial intelligence to sift through hours of video surveillance was one example Gonzalez cited of tech employees organizing to effect change within their organization.

“The thing that was really exciting about watching some of the workers organizing inside of Google that led to the shutdown of Project Maven was that workers not only thought that things were wrong,” she said, “but they actually organized to be able to build power to stop it.”