When domestic oil and gas extraction is framed as an avenue toward energy independence, its appeal jumps 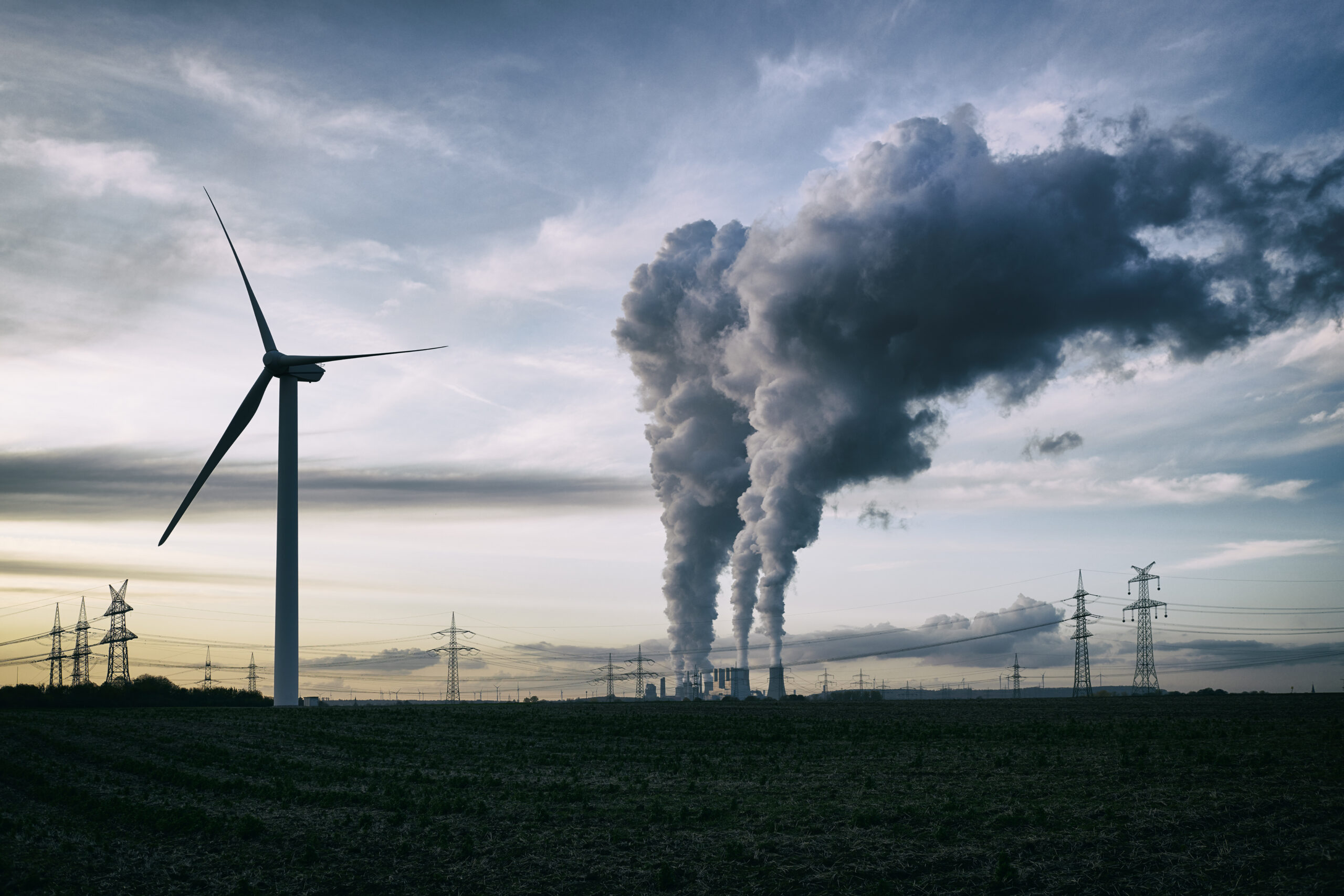 A new Morning Consult/Politico poll found that 50 percent of voters say the United States should "incentivize the use of renewable energy over fossil fuels to create cleaner energy and combat environmental pollution and climate change," compared with 37 percent who say the country should "should continue to extract fossil fuels in the U.S. to make our country less dependent on other countries for energy and lower fuel prices." (Getty Images)
By Lisa Martine Jenkins

Given the options of investing in domestic fossil fuel production to lessen U.S. reliance on other countries or incentivizing renewables development to mitigate climate change, the latter approach holds an edge of 13 points among voters, according to a new Morning Consult/Politico poll.

This somewhat complicates the picture that emerged in the aftermath of Democratic presidential nominee Joe Biden’s comments in last week’s debate about transitioning from the oil industry to renewables: While President Donald Trump and certain members of the media seized on the moment, an Oct. 23 Morning Consult/Politico poll found that 57 percent of voters backed the pitch.

However, when asked more explicitly about the perceived trade-offs between energy independence (via continuing to extract fossil fuels) and combating climate change (via increasing the use of renewables), voters were more split. Exactly half of the respondents in the Oct. 23-25 poll chose the latter option, while 37 percent said the United States “should continue to extract fossil fuels in the U.S. to make our country less dependent on other countries for energy and lower fuel prices.”

Related: Biden Said He Would Transition From the Oil Industry. Nearly 3 in 5 Voters Support That Move

Voters from rural communities were the only geographic group with a preference for continuing to extract fossil fuels over incentivizing the use of renewables, at 47 percent to 40 percent. Urban and suburban voters, meanwhile, backed renewables by 57 percent and 51 percent, respectively.

And perhaps unsurprisingly, Democrats were more heavily inclined toward renewables than their GOP counterparts, at 69 percent to Republicans’ 29 percent. Roughly half of independents (51 percent) agreed. 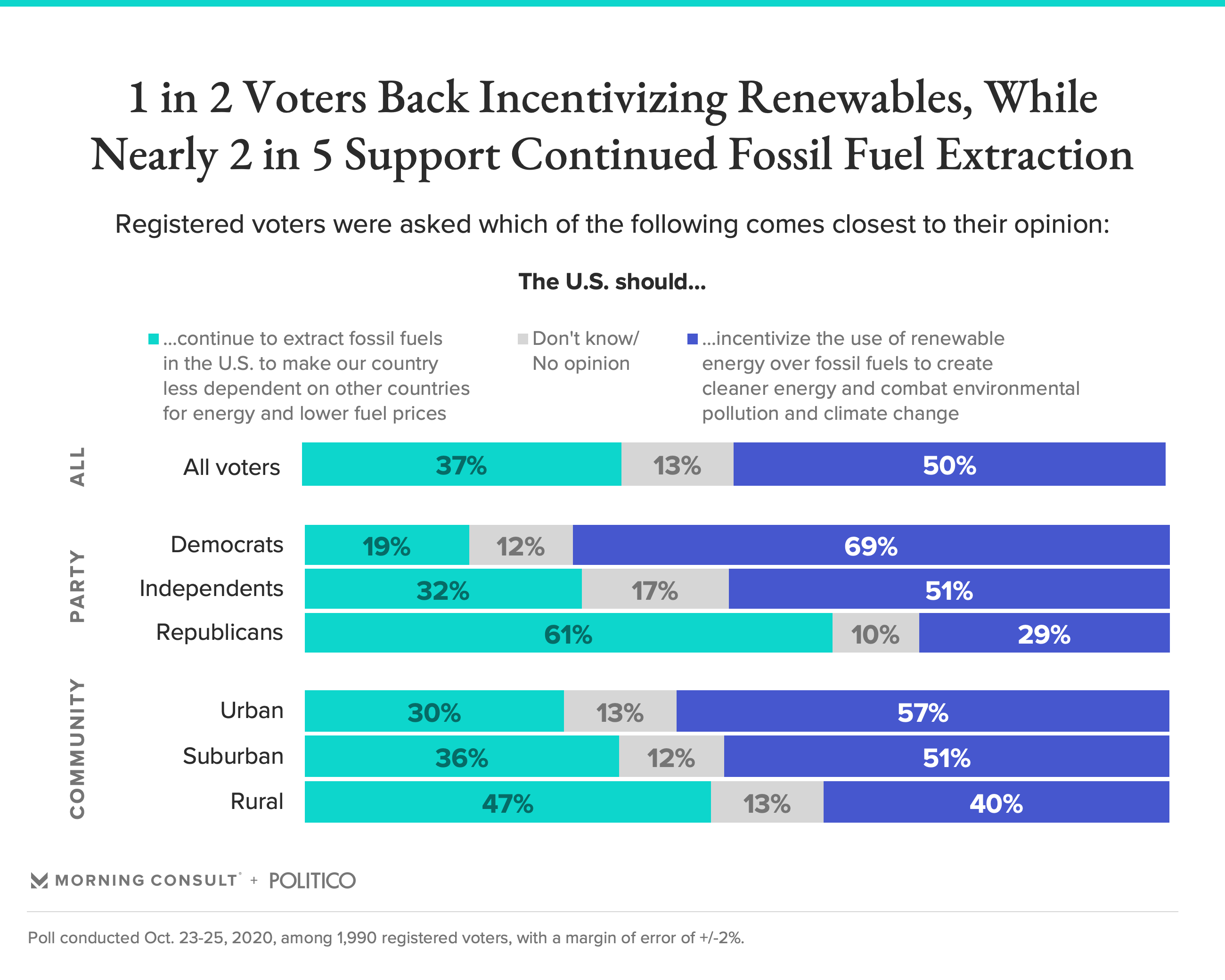 The option of “incentivizing” renewables reflects Biden’s four-year, $2 trillion clean energy and infrastructure investment plan, which includes reforming tax incentives that generate energy efficiency and clean energy jobs as well as implementing incentives for developing zero-emissions vehicles. While the transition to renewable energy is already underway, federal programs can either speed it along or attempt to prop up a domestic fossil fuel sector already struggling under the weight of the pandemic.

This binary of energy independence versus climate action is one that more closely reflects industry and Trump administration talking points on the transition than the reality of trade-offs between fossil fuels and renewables. The concept of energy independence emerged decades before renewables were a part of the conversation, and modern analyses have highlighted that developing renewable resources and diversifying the U.S. energy mix is one potential way to opt out of relying on other countries, given that the wind and sun are not going anywhere.

However, the notion that fossil fuels are more reliable or more secure is a pervasive one especially among Republicans, as demonstrated by the 61 percent of them who think the United States should keep using those resources.

But even if the demands of climate change did not call for phasing out their use, the relatively popular natural gas does not guarantee “independence” in the long term. In fact, the U.S. Energy Information Administration expects that the country has enough domestic natural gas resources to last about 92 years; in other words, these resources could be used up within the lifetimes of babies born today.