Call it making up for a dreary year: More Americans are planning to go all-in on their holiday home decorations this year, new polling shows, even as they cut back on holiday gift spending and forgo large holiday gatherings amid the pandemic.

That’s jolly news for the Christmas tree industry, both real and artificial, as the public looks to add some sparkle to what has been a very rough year. 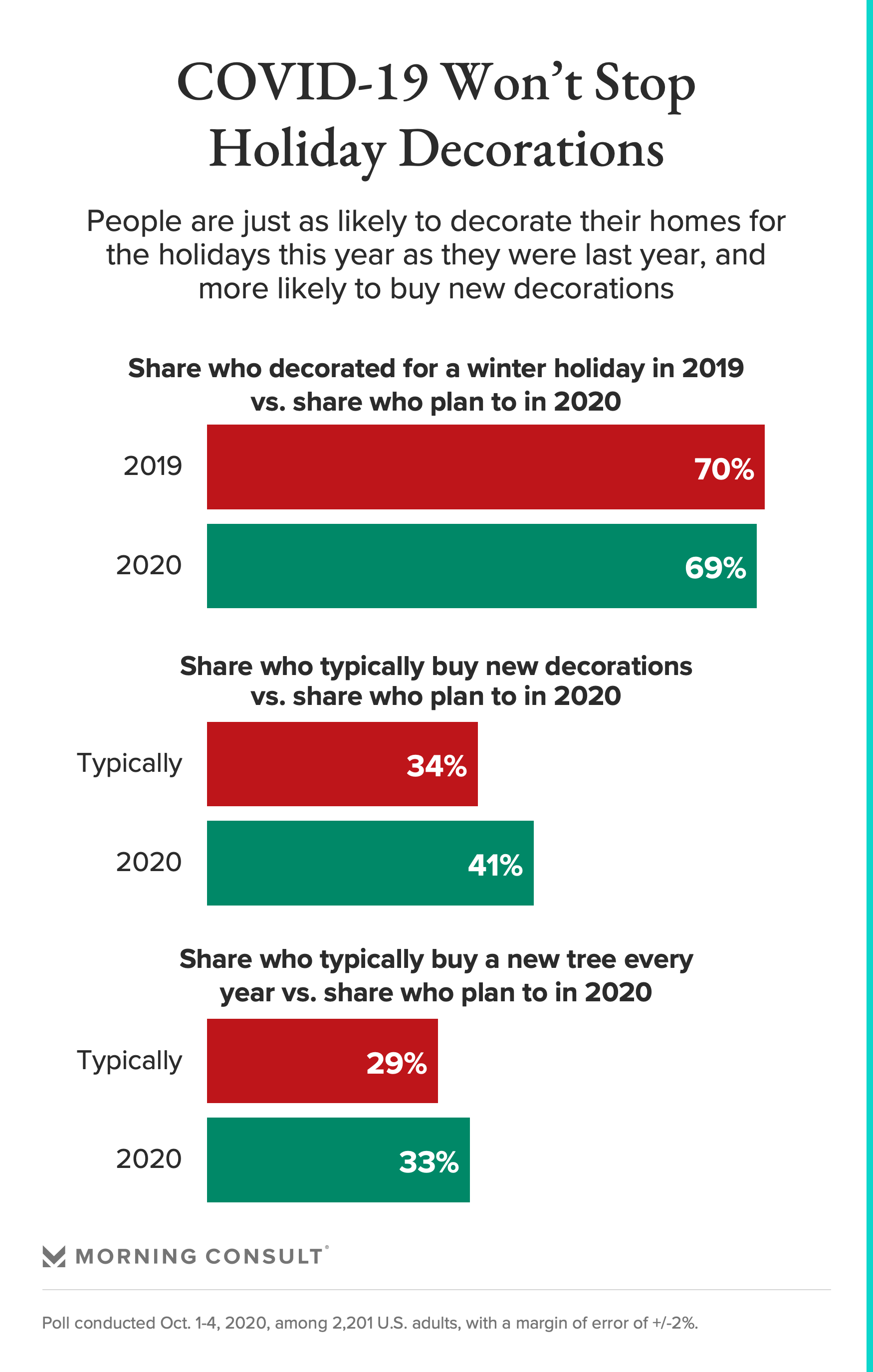 “We’re expecting the COVID impact to be a positive one for real Christmas trees,” said Doug Hundley, spokesperson for the National Christmas Tree Association. “We think people will be at home more than on vacations. They’ll be at home, so they may be more likely to want a tree, but they’re also strongly motivated to get outdoors.”

An Oct. 1-4 Morning Consult survey shows that roughly the same share of consumers this year, compared to last, plan to decorate their home for the holidays.

Some are even planning to up their decoration game, as the rising number of COVID-19 cases across the country could keep many at home this Christmas. About one-third (34 percent) of consumers said they typically buy new holiday decorations each year, and 41 percent said they intend to refresh their decorations this year.

Twenty-nine percent of adults said they buy a new tree every year — either real or artificial — roughly the same share who said they’ll get one this year.

While a majority (54 percent) of Americans said they typically opt to reuse artificial trees, 17 percent said they buy a real tree every year.

Millennials in particular are a vital demographic to Christmas tree farmers, Hundley said.

As millennials have aged into their purchasing power and started families, they have helped real Christmas trees gain back ground against artificial ones, Hundley said.

“Convenience has dominated consumer motivations for several decades, but millennials, and probably the younger generation, are more interested in new things and turning their backs on plastics,” he said.

Real trees are a more attractive option for anyone looking to go eco-friendly, Hundley said, as the vast majority are grown in the United States and Canada, and decompose in five to 10 years or can be used to grind into mulch. 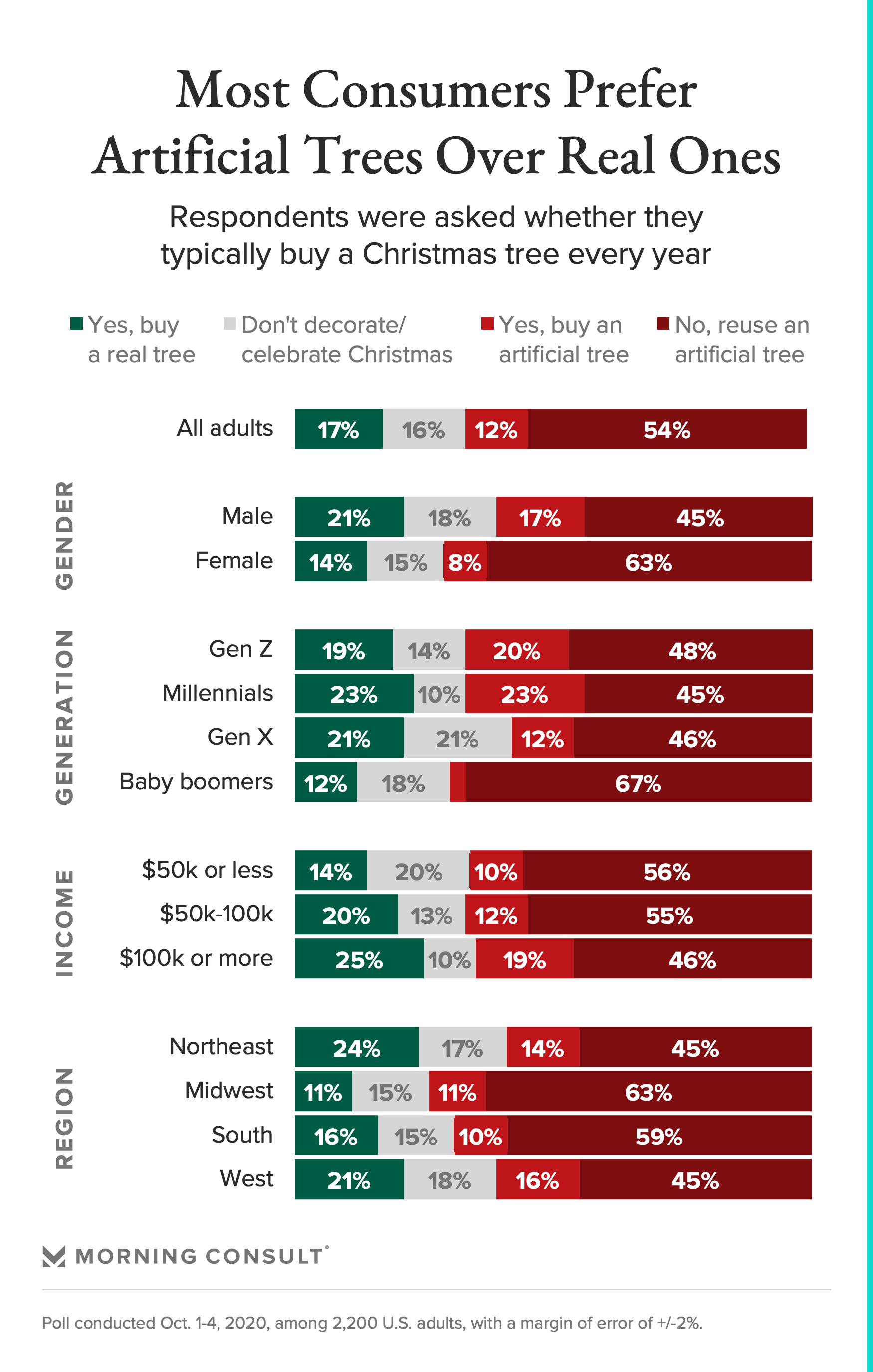 Still, the association is pragmatic when it comes to the popularity of real trees compared to the convenience of artificial ones. About 75 percent of trees in homes this year will be artificial, Hundley said, based on the association’s research.

Artificial tree sales continue to improve this year, starting with spikes for “Christmas in July” sales.

Balsam Hill, one of the biggest players in the artificial tree industry, has seen a 40 percent year-over-year increase in U.S. sales so far this year, with sales of other holiday decor including ornaments up more than 50 percent.

Balsam Hill trees are pricier than your typical artificial Christmas tree, with price tags ranging from $400 to $2,000 and up for the most lifelike options. But people are still willing to spend.

“Artificial trees in general are having a good year because people want to invest and replace their old trees, and they’re willing to do it because they haven’t spent as much money this year on things like going out to dinner or going on vacation,” said Mac Harman, Balsam Hill’s chief executive and founder.

At Treetopia, a company that sells artificial Christmas trees known for its unique color options such as black and pink, sales are up 53 percent year over year, said Tami Kelly, Treetopia’s trend expert, with silver trees up 91 percent.

“People really are looking for some sparkle this year,” Kelly said. “They want to get to the holiday season, so they’re decorating earlier as well.”

Related: The North Pole Is Going Digital in the Age of COVID

The era of artificial trees started in earnest in the 1970s, and as their demand grew, wholesale prices for Christmas trees stagnated. Growers were making an average of about $20 for a six- or seven-foot tree in the 1980s and 1990s, Hundley said, and wholesale prices dropped even lower following the Great Recession.

Since Christmas trees take about seven to 10 years from the time they’re planted until they’re ready to be harvested, by the mid-2010s, tree supply matched demand as Americans recovered from the recession and opened their wallets again to decorate for the holidays. 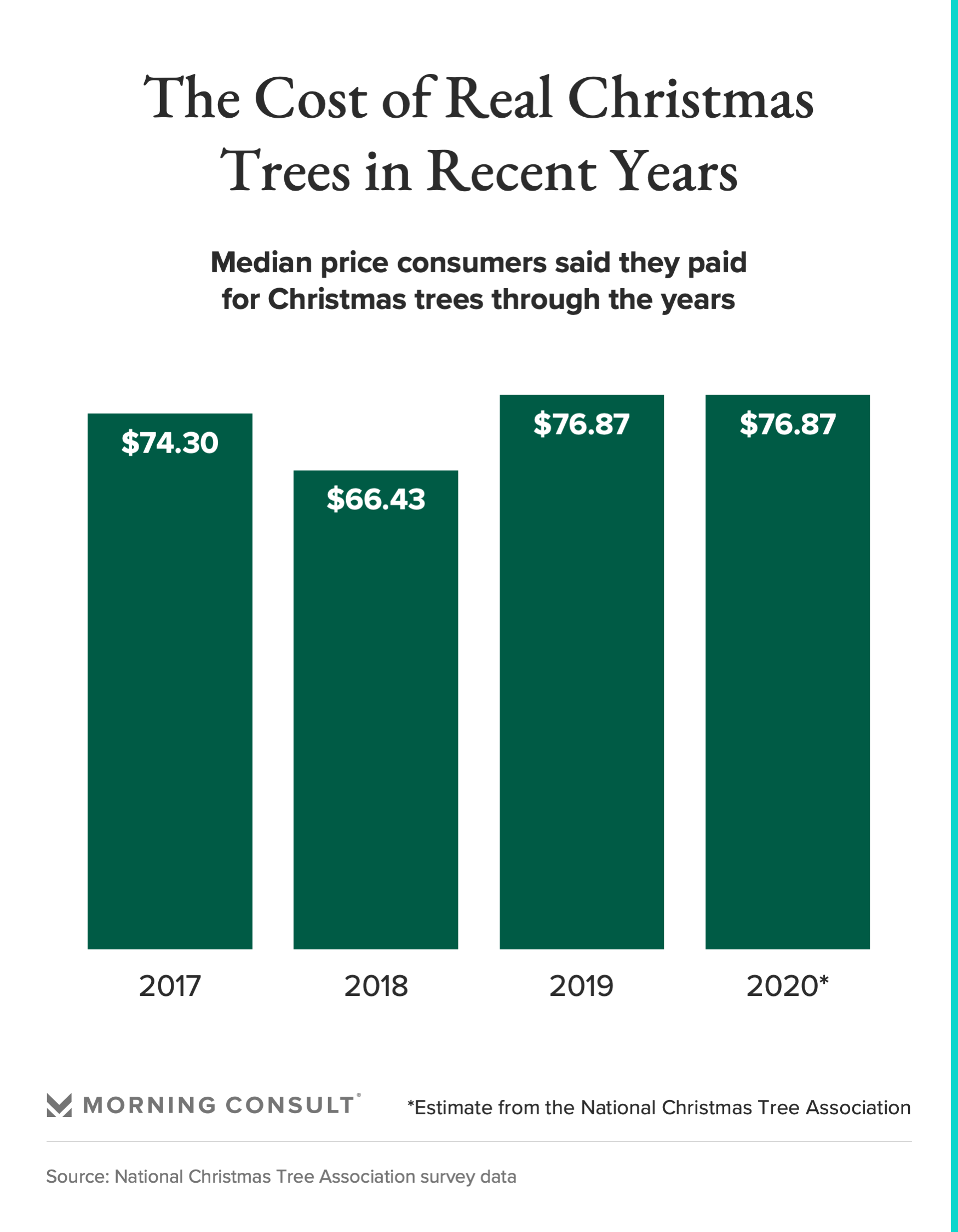 Prices have been climbing fairly consistently ever since, when fewer trees were sold and growers made a reasonable profit for the first time in years, according to the association.

Compare that to the $80 that Americans pay on average for a reusable artificial tree, according to Balsam Hill’s Harman, who added that prices tend to be closer to about $250 at most retailers such as Home Depot Inc., but the average drops due to sales of $40 trees from discount department stores such as Walmart Inc.

Although most people favor artificial trees, less planting and continued demand for real trees has led to tight supply since 2015.

Dale Barker, owner of Barker’s Christmas Tree Farm in Lexington, Ky., said he’s had trouble keeping up with demand since he sold his first tree in 2002. Back then, Barker said he sold 300 trees in a month. In recent years, he said he has sold 1,000 to 1,200 in a two- to three-day period.

This year, when he opens on Nov. 27, he isn’t taking any risks when it comes to social distancing.

“We knew we couldn’t do the same thing we always have,” he said. “Everyone wants to come and get the biggest and the best trees as soon as we open up, but we knew we had to spread people out this year.”

Barker’s farm is using a reservation system, and plenty of hand sanitizer, this year, and saw 700 people sign up in the first week of November alone.

Big-box retailers are also expecting that shoppers will be interested in real Christmas trees this year. Lowe’s Cos., for instance, is offering delivery of fresh, local Christmas trees for those who want real trees but don’t feel comfortable venturing out to cut down their own.

While artificial trees offer a more convenient option for some, given big retailers’ expectations of greater consumer interest in both real and artificial trees and the increased value of comfort and tradition after a year like 2020, Hundley said the real tree market is positioned to hold steady this year alongside artificial trees.