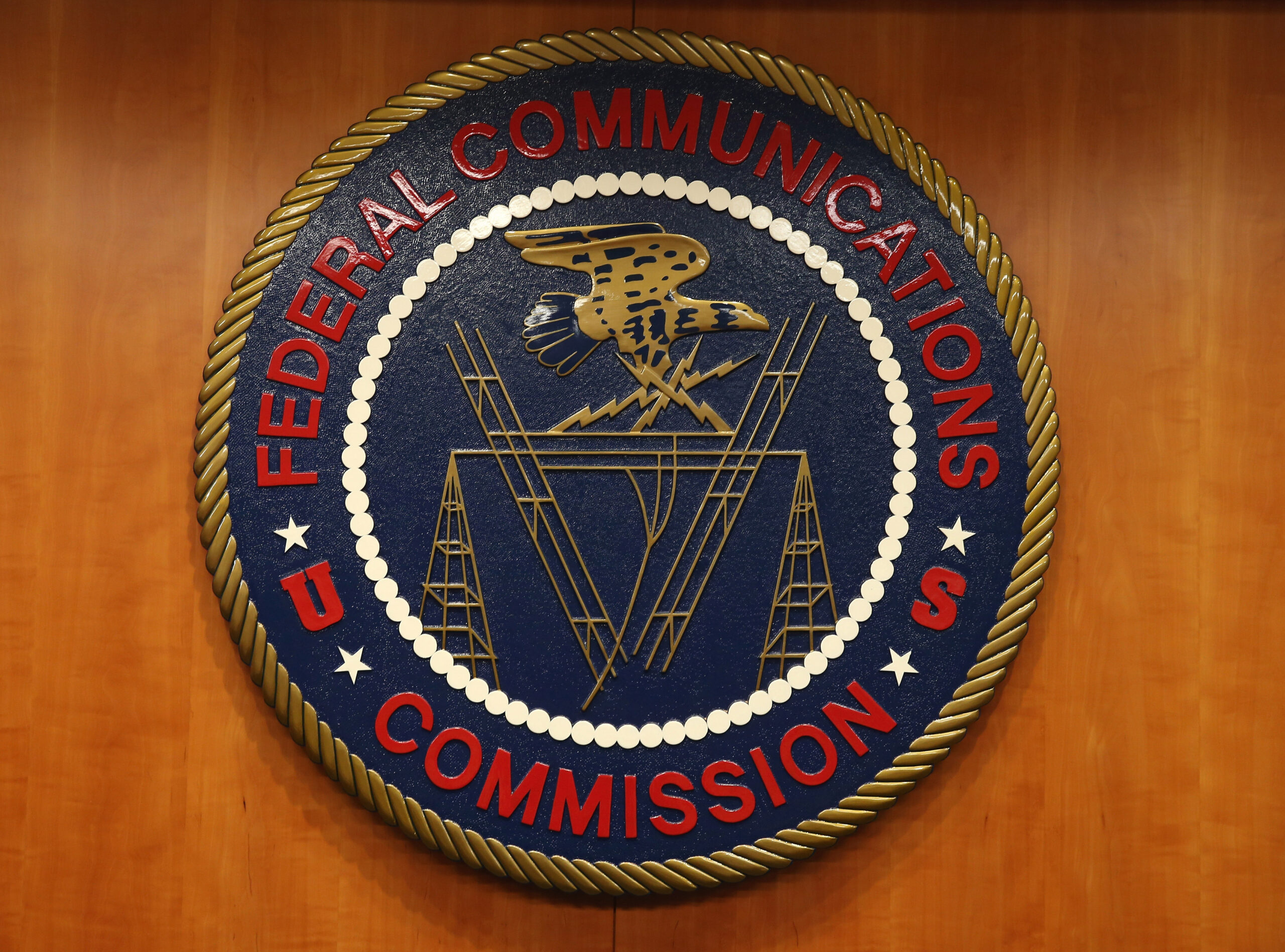 The seal of the Federal Communications Commission hangs inside the hearing room at the agency's headquarters on Feb. 26, 2015, in Washington, D.C. (Mark Wilson/Getty Images)
By Sam Sabin

The confirmation leaves the FCC deadlocked in a 2-2 party line vote ahead of President-elect Joe Biden’s administration taking over on Jan. 20. Until a fifth commissioner is nominated and confirmed, any possible major internet reforms, such as reinstituting net neutrality or programs doling out funds to expand internet access to rural communities and schools during the pandemic, will likely be slowed.

For weeks, Democrats and advocacy groups have pushed the Senate Commerce Committee to halt Simington’s confirmation to take over Commissioner Mike O’Rielly’s seat due to concerns about his work at Commerce’s National Telecommunications and Information Administration, where he reportedly had a hand in drafting President Donald Trump’s executive order petitioning the FCC to reconsider rule-makings for Section 230 of the Communications Decency Act. And concerns heightened following a Politico report last month detailing an email Simington sent to Fox News host Laura Ingraham soliciting her support in encouraging the FCC to take up the Section 230 petition.

Meanwhile, business groups and Republicans have urged the Senate to push through Simington’s nomination before the end of the congressional session with the hopes of slowing down the Biden FCC’s work. For instance, the conservative organization Americans for Tax Reform sent a letter on Dec. 1 to Senate Majority Leader Mitch McConnell (R-Ky.) arguing that Simington’s confirmation would “ensure a 2-2 FCC that could forestall billions in economic damage.”

Morning Consult asked experts and analysts for their opinions on Simington’s confirmation to the FCC and what a 2-2 deadlock would mean for the Biden administration:

“If they really thought about it, they would realize that the advantage that they’re seeking is not going to materialize, and in fact, it could make matters worse for the Republicans,” said Guice, who worked at the FCC in various roles for over a decade. “There is a ton of stuff that is done down at the Bureau and office-level at the agency, and all of that stuff is at the chair’s discretion.”

“So, if they want a one-body commission, where the chair basically decides everything and that’s just what the agency does until there’s a fifth person there, then that’s exactly what they’re voting for today.”

“If Chairman Pai was able to pass 220 items, and 80 percent with bipartisan support, then I think there is an incredible opportunity to do at least four or five items a month with bipartisan support,” he said, noting that a deadlocked commission could still pass certain orders. “But the one big thing that everyone talks about is net neutrality, and the problem is that net neutrality is going to get caught up in the courts again and it’s going to go back and forth and back and forth. Inevitably, Congress has to solve this problem.”

“The agency can still do something,” Wood said. “More often than not, items are adopted 5-0 or 5-0, but with some concurrence or partial dissents, so some business can get done. It’s just that anything that’s contentious and split along party lines would be unable to move, and unlike the song you hear from some of the Republicans, that’s not good for anybody.”

“The FCC plays a big role in making things work and doling out money for broadband subsidies and adoption,” he added.