Most of the stimulus payments will not go toward consumption, survey shows, and that’s OK 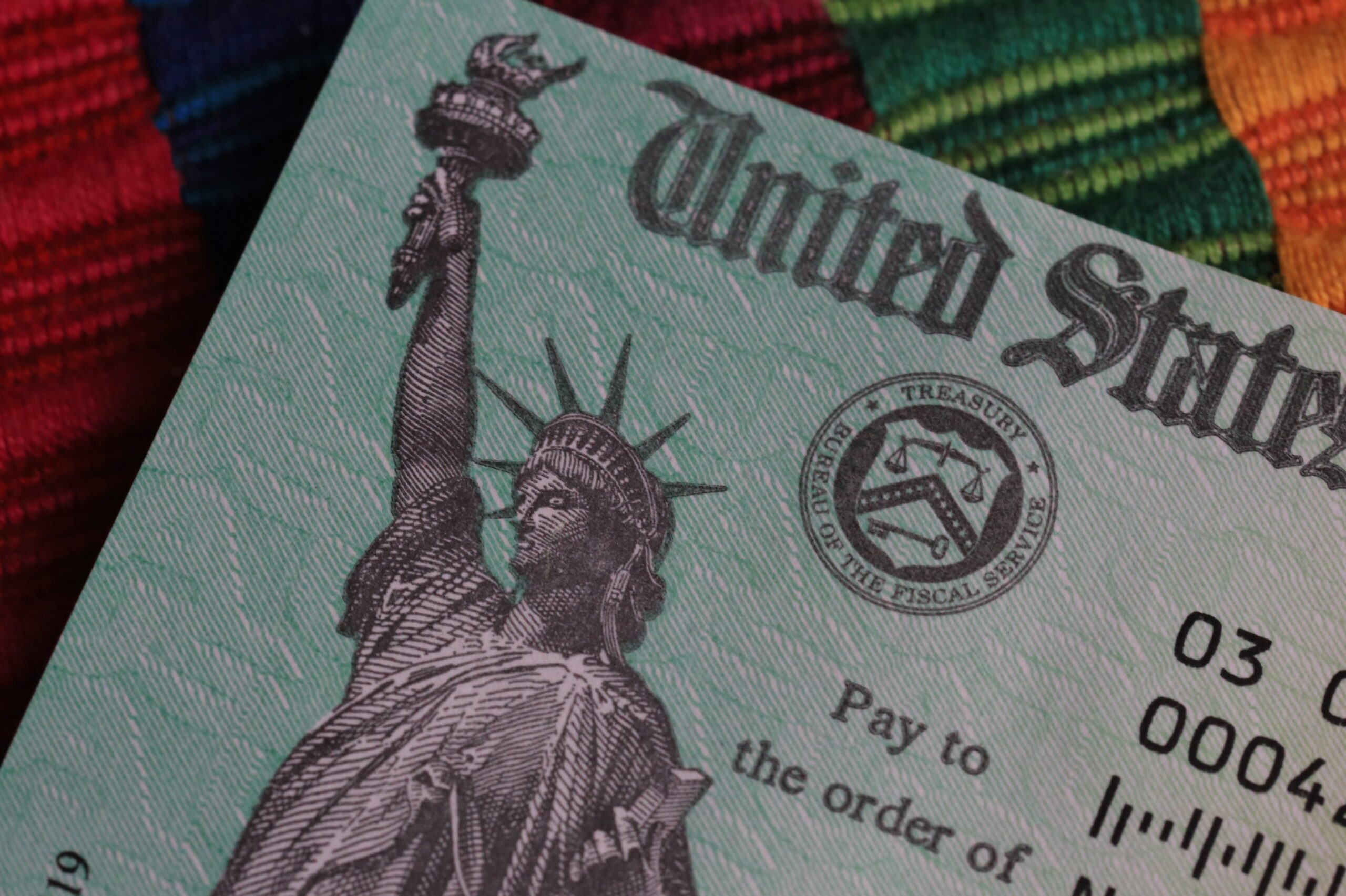 A new Morning Consult survey found that when U.S. adults were asked how they would spend a $600 stimulus check if they were to receive one, 60 percent of high-income respondents indicated an intent to save their checks compared to 45 percent and 33 percent of middle- and low-income respondents, respectively. (Getty Images)
By John Leer

Americans plan on using their stimulus checks to pay recurring expenses and increase their savings, according to new Morning Consult polling, with fewer indicating an intent to make additional discretionary purchases. These intentions signal consumers’ desire to strengthen their personal finances during a period of elevated economic uncertainty, as consumer spending is likely to moderately increase over the course of January rather than jump back immediately. By the time states begin disbursing federal unemployment insurance payments, consumers are likely to be in a stronger financial position, allowing them to make discretionary purchases later this month and throughout February.

Morning Consult asked 2,200 adults how they would spend a $600 stimulus check if they were to receive one. The survey was fielded Dec. 18-20, 2020, prior to the passage of the coronavirus relief package. Identifying differences across the income spectrum is particularly important for this exercise since the value of the stimulus checks is a decreasing function of 2019 income. This analysis groups respondents into three buckets based on annual household incomes: under $50,000 (i.e., low income), between $50,000-$100,000 (i.e., middle income) and over $100,000 (i.e., high income). 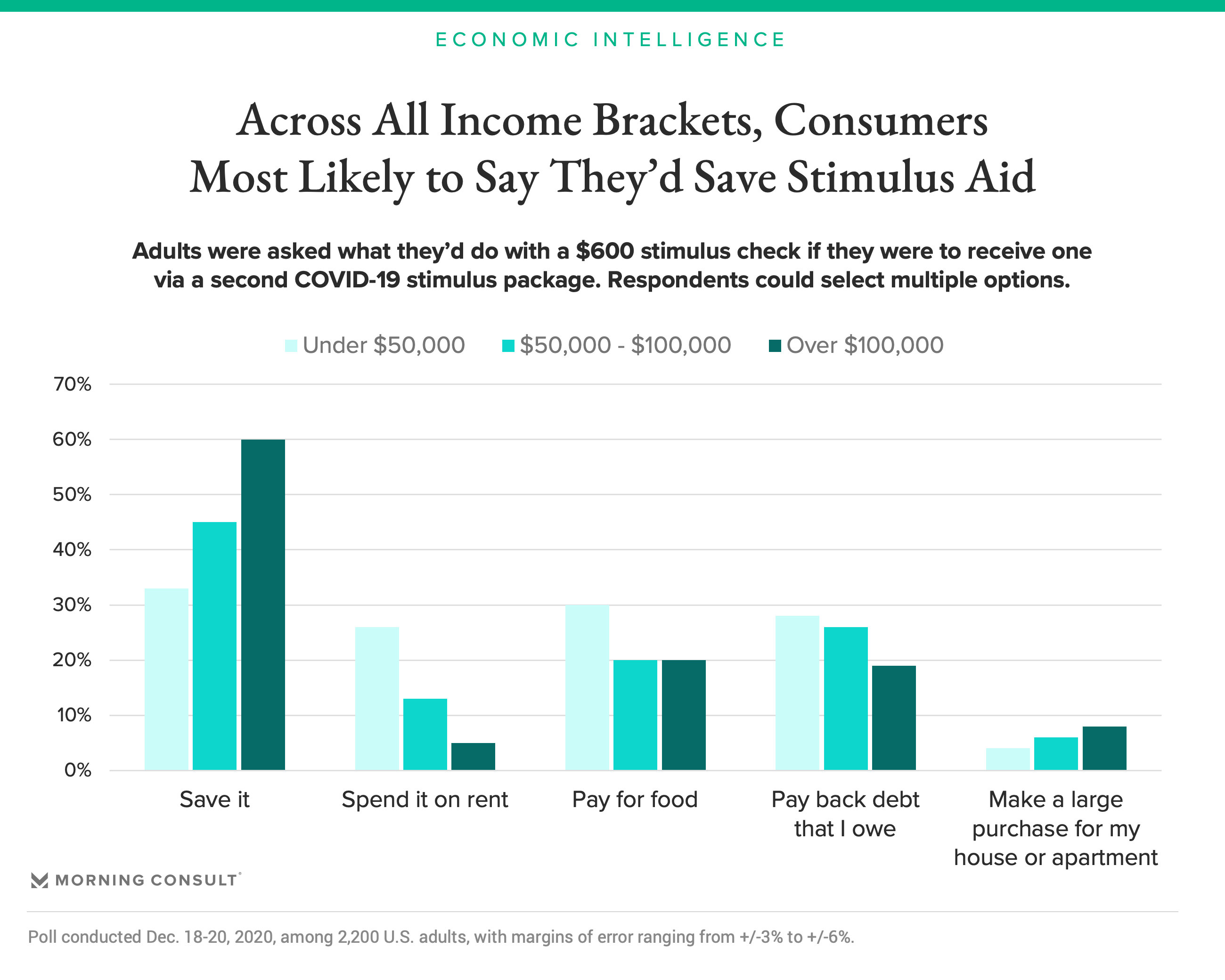 Consumers across the income spectrum indicated that they were most likely to save their stimulus checks. Sixty percent of high-income respondents indicated an intent to save their checks compared to 45 percent and 33 percent of middle- and low-income respondents, respectively. The disparity across income groups is consistent with a higher share of low-income adults struggling to pay their basic expenses for a full month. Low-income Americans need the stimulus money to pay their bills while high-income Americans are able to build their savings.

These findings do not indicate that the stimulus checks will all flow into savings without boosting consumer spending. While high-income adults intend to save their checks, a smaller share of them will receive the full stimulus check. Single tax filers with no dependents earning over $87,000 will not receive a check, and married, joint filers earning over $174,000 will not receive a check. While households with annual incomes between $100,000-$174,000 will disproportionately save their checks, they represent a small share of all recipients.

Low-income respondents are more likely to say they plan to spend their stimulus checks on rent, debt repayments and food than the other two groups. Neither rent nor debt payments directly boost consumer spending since they reflect a repayment of something that has already been consumed, so to speak. (Rent is consumed by living in the house or apartment.)

Unlike rent and debt payments, food purchases directly contribute to retail sales and consumer spending. Thirty percent of low-income respondents indicated an intent to buy food using their stimulus checks, compared to 20 percent of middle- and high-income respondents. The Census Bureau’s Household Pulse Survey in November indicated that Americans are experiencing an elevated level of food insecurity, particularly acute among low-income households. Thus, spending on food by this income group is more likely to represent additional spending, or spending that would not have occurred without the stimulus checks.

Finally, consumer discretionary spending and consumer durable goods purchases are unlikely to see a dramatic increase as a result of the spending bill. A low percentage of consumers across the income spectrum indicated an intent to spend their checks on large purchases for their houses or apartments. This does not mean that sales of consumer durable goods will decrease, but rather that the stimulus checks are unlikely to meaningfully change trends in this spending category.

Looking ahead, improvements in personal finances will drive consumer spending toward the end of January and early February, with federal unemployment payments providing an additional boost once states begin disbursing those funds. Taken together, these trends will drive economic activity in the first quarter.