Most Liberal, Conservative Social Media Users Want Platforms That Cater to All. Many of Their Account Sign-Ups Indicate Something Else 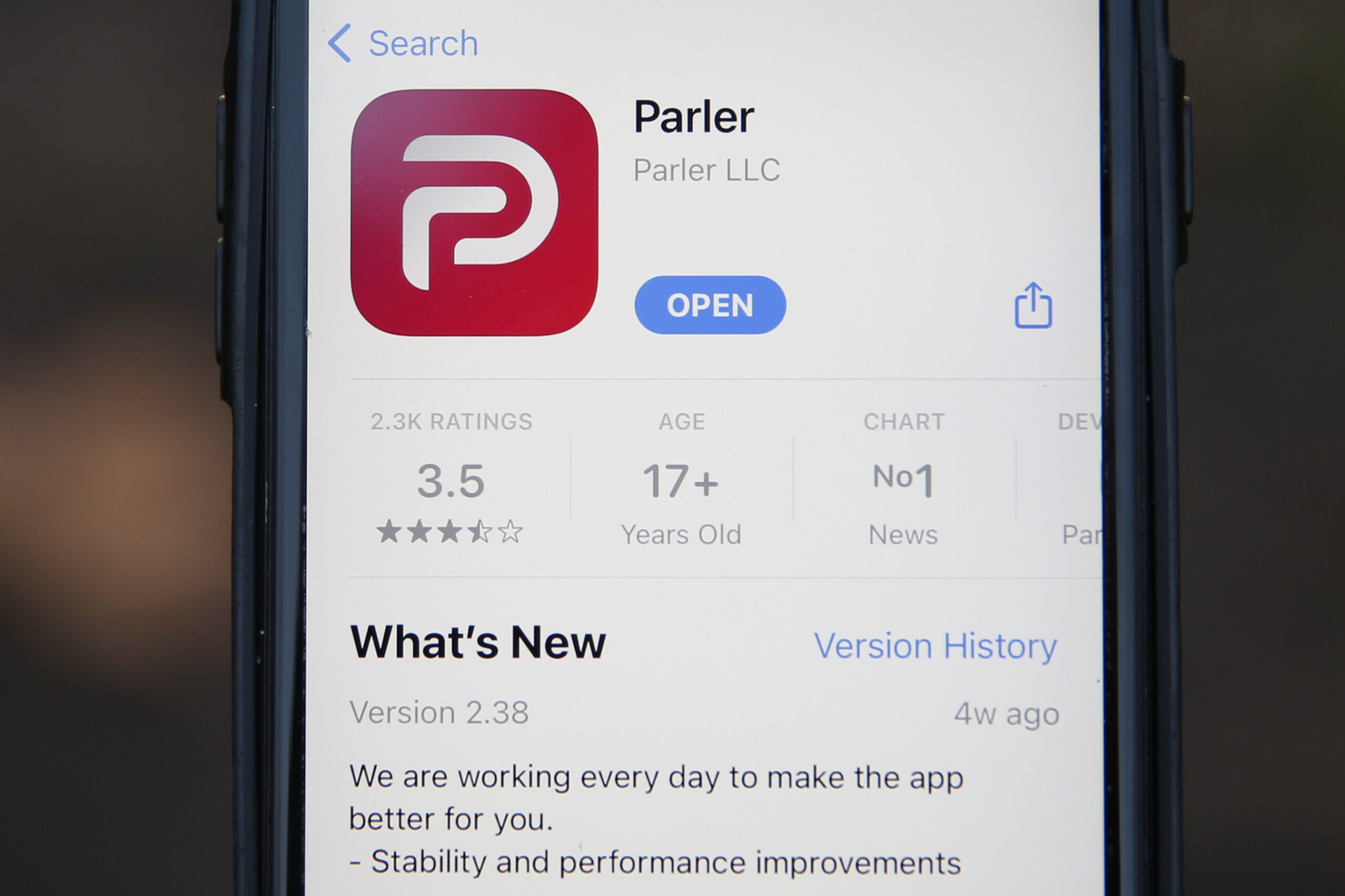 A new Morning Consult survey found that conservative social media users were far more inclined to say that Parler had conservative leanings (40 percent) than any other platform including in the poll, with Amazon having the next highest share at 12 percent. (Hollie Adams/Getty Images)
By Sam Sabin

In the days following President Donald Trump’s removal from Twitter, Facebook and several other online platforms, the president leaned on age-old rhetoric, calling Big Tech’s moves “dividing and divisive.” And Parler Inc. Chief Executive John Matze, whose platform was booted from the app stores and internet for allegedly failing to moderate hate speech on its site, said those decisions were a “coordinated attack by the tech giants to kill competition in the marketplace.”

But while roughly 3 in 5 social media users, including both liberals and conservatives, said in a new Morning Consult survey that they want social media sites to show a variety of political viewpoints, where they spend their time online and their perceptions of various platforms’ political leanings tell a different story, with many flocking to companies they believe are like-minded.

In the survey conducted Jan. 12-14 among 2,116 self-identified social media users, 62 percent said they’d prefer if social media sites offered content recommendations from all perspectives, rather than cater specifically to their own political views.

On the surface, conservative and liberal social media users appear to want similar things from their platforms. Both have comparable views regarding who is responsible for crafting and implementing policies about how political content is shared on social media platforms, with majorities of each ideology saying the responsibility lies with the companies, instead of lawmakers, the president or users on the platform.

And they’re drawn to sites for similar reasons. On a list of nine possible reasons for users to engage with a social platform, each ranked having the ability to adjust their privacy settings as their top factor, with 84 percent of liberal users saying it was either very or somewhat important and 80 percent of conservative users saying the same. While the exact rankings varied slightly, liberal and conservative users had the same characteristics for engaging with social platforms in their top four: their friends and family are also on the platform, the ability to follow news outlets and stay informed and the site’s content moderation policies.

But that’s where their similarities end.

Mention the name of a specific platform, and the views of liberal and conservative social media users change drastically, underpinning an apparent desire to be on sites that cater to their own values.

Conservative users were far more inclined to say that Parler had conservative leanings (40 percent) than any other platform included in the poll, with Amazon having the next highest share at just 12 percent who said the company leaned toward the right.

And those preferences are clear in where they currently say they have accounts. Twitter was the most divisive, with 59 percent of liberals and 35 percent of conservatives saying they had an account on the platform — a difference of 24 percentage points, the largest of the 14 sites the poll asked about. Twitter Inc. was the first to issue a permanent ban of Trump’s personal account on its platform after the insurrection at the U.S. Capitol on Jan. 6.

Similar double-digit differences in account holders across ideologies were seen with Facebook Inc.-owned Instagram, TikTok and Snapchat. Both Facebook and Snap Inc. have either announced “indefinite” suspensions or planned permanent bans of the president on their platforms.

Meanwhile, there was virtually no difference in the share of liberal and conservative users who had Facebook accounts, although the company’s main platform is easily the most widely used platform of them all. In its latest earnings report, Facebook reported daily active user numbers of 1.82 billion in September, up 12 percent from the same period a year ago. 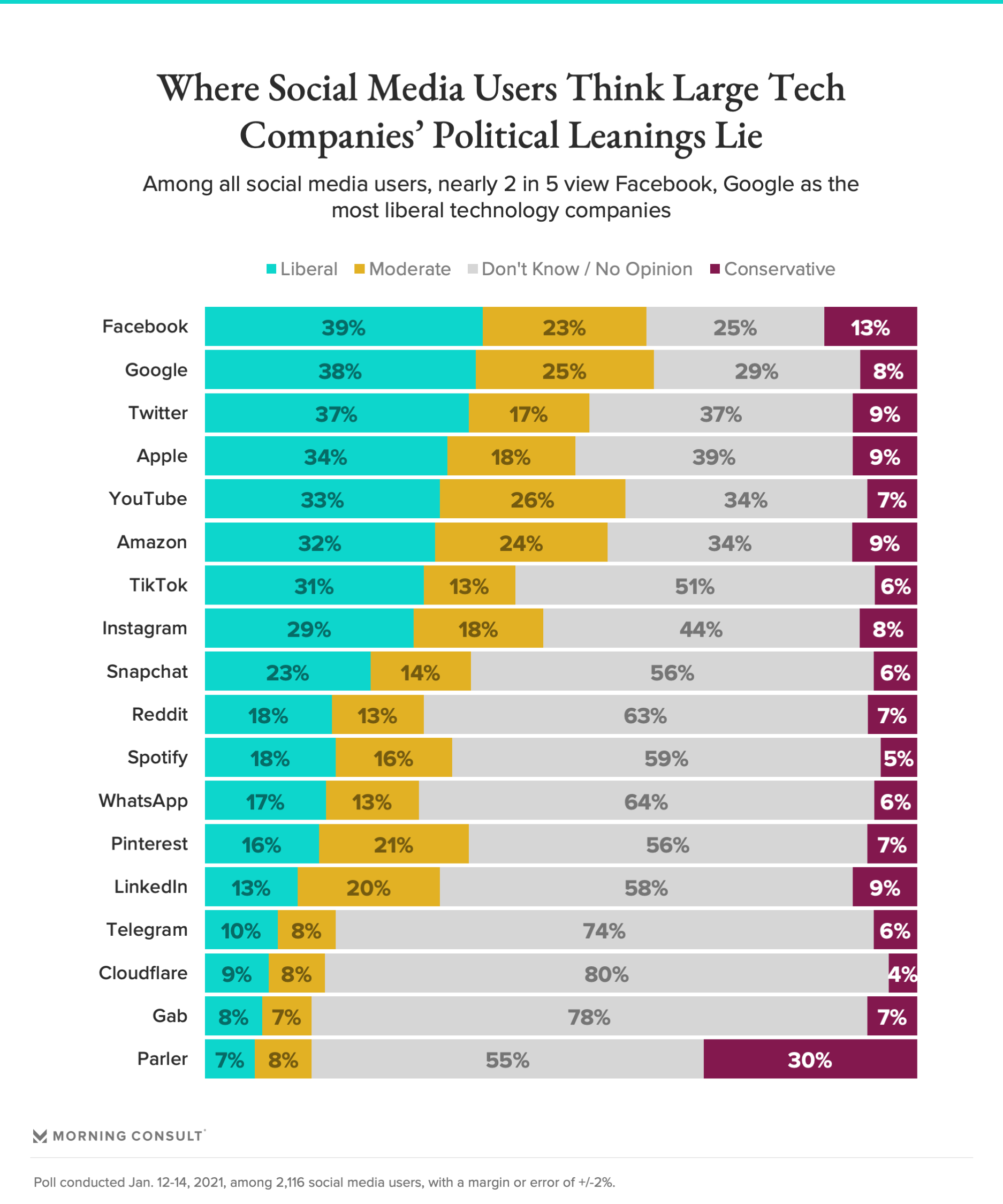 As mainstream social media companies further restrict posts from Trump and extremists, apps and sites popular with Trump supporters and those extremists have grown in popularity over the past week.

According to data provided to Morning Consult from Apptopia, daily downloads in the United States of Parler, an alternative to Twitter favored by conservatives, more than tripled between Jan. 8 and 9, reaching 94,711 that Saturday, before it was removed from the Apple iPhone and Google Android app stores and taken offline early Jan. 11 after Amazon Web Services revoked its hosting services. Parler is in the middle of legal proceedings to seek a preliminary injunction against AWS and restore its service.

Downloads of Telegram, a general encrypted messaging app popular with extremists and reportedly used to plan the Jan. 6 attack, saw similar growth, with downloads growing more than six times in the week since the Capitol storming, from 42,815 the day of the riots to 286,365 on Wednesday.

Other platforms that market themselves as supporting free speech, including MeWe, CloutHub and Rumble, also saw their downloads steadily increase in the past week, according to Apptopia’s data. 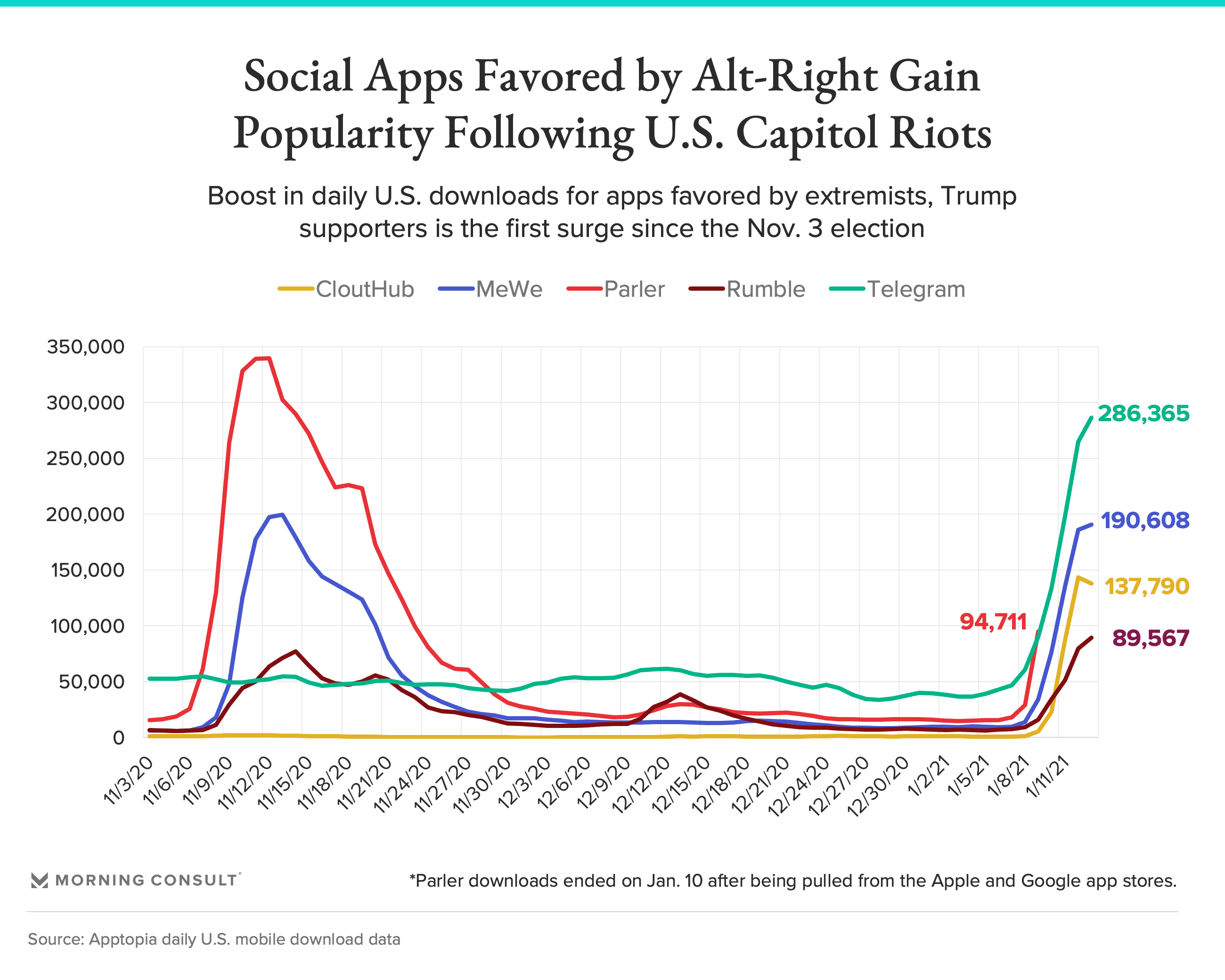 These partisan divides play a key role in users’ thinking about which content should be removed and whether it’s appropriate to ban users if they violate certain policies.

The survey was conducted Jan. 12-14, with a margin of error of 2 percentage points among all social media users and 4 points among the liberal and conservative user subgroups.

Correction: The first chart was updated to correct the share of social media users who view Facebook and Google as liberal.