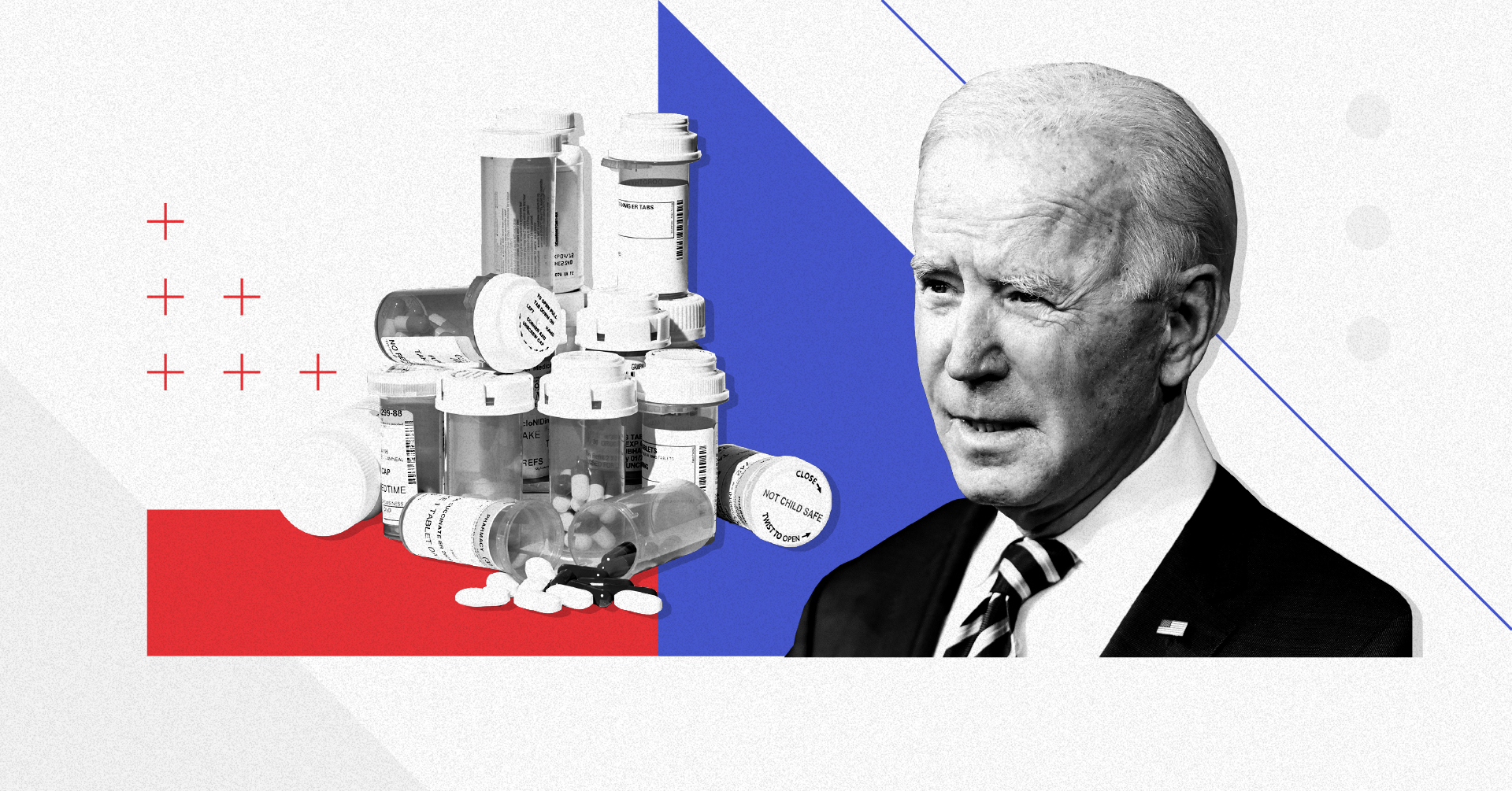 This is part of a suite gauging Americans’ priorities for the incoming administration on a variety of pressing issues in the political, policy and business spaces. See our other work analyzing voters’ preferences on the general approach to governing, the environment, the economy, finance and housing, as well as how marketing leaders can look to flourish in a political landscape that is growing increasingly divided.

President-elect Joe Biden will have his hands full when he assumes the White House on Wednesday, and policy analysts say it will take time to fulfill his promises to roll back many of the health policies of the Trump era. But voters have a few health care measures they want Biden to focus on right away, new data shows.

About 2 in 5 voters say passing a health care reform bill should be a top priority during Biden’s first 100 days in office, according to the new Morning Consult survey, while a third said the same of adding a new public health insurance option. But with Democrats controlling Congress by only a slim margin and their most ambitious health care proposals unlikely to pass, analysts expect Biden to lean more on his executive authority to shape health policy, largely by rolling back the Trump administration’s efforts to weaken the Affordable Care Act.

“The Trump administration did a lot to undermine the Affordable Care Act, and the Biden team’s first move will be, apart from dealing with the pandemic, to try to undo as much of that as possible,” said Nicholas Bagley, a law professor at the University of Michigan. “Some of that’s going to be pretty straightforward, but a lot of it is pretty challenging.”

Some of these more straightforward steps involve shoring up the federal health insurance marketplace. The Trump administration cut Obamacare outreach funding by 90 percent in 2017 and did little to promote open enrollment. The survey shows voters were sharply divided on whether they would be in favor of the Biden administration’s effort to restore funds to market the ACA’s coverage options, with 82 percent of Democrats and 30 percent of Republicans supporting such a move.

Biden has also considered opening a special enrollment period to allow people to buy health coverage during the pandemic, with voters a little less split on the potential measure: 84 percent of Democrats and 59 percent of Republicans said they would either strongly or somewhat support an extended enrollment period.

Biden could also tighten restrictions on short-term health plans that aren’t required to provide the same level of coverage as ACA-compliant plans, which Trump’s team promoted. But such a move would have the support of just 49 percent of voters, including 69 percent of Democrats and a quarter of Republicans, the poll shows.

“The Trump administration’s actions that have undermined health coverage, a lot of those have been through rulemaking,” said Aviva Aron-Dine, vice president for health policy at the Center on Budget and Policy Priorities and a former Department of Health and Human Services official. That means unwinding them will likely be a “gradual process.”

HHS has also unveiled a flurry of new rules in recent weeks that will require different legal and procedural routes to undo, Bagley said. Among the most notable: recent efforts from Centers for Medicare and Medicaid Services Administrator Seema Verma to make it more difficult for Biden to wind down waivers for states’ Medicaid work requirements, which the Trump administration supported.

The incoming Biden administration will also need to determine whether it wants to salvage any of Trump’s policies, such as attempts to rein in prescription drug costs through executive orders that were promptly met with legal challenges from pharmaceutical lobbyists.

Potential administrative action on drug pricing had broad support, the poll found, with 70 percent of voters supporting the creation of a review board that compares the prices of prescription drugs in other countries to determine their recommended Medicare launch prices, a policy Biden proposed on the campaign trail. Another 60 percent of voters were in favor of allowing U.S. consumers to import prescription drugs from abroad. 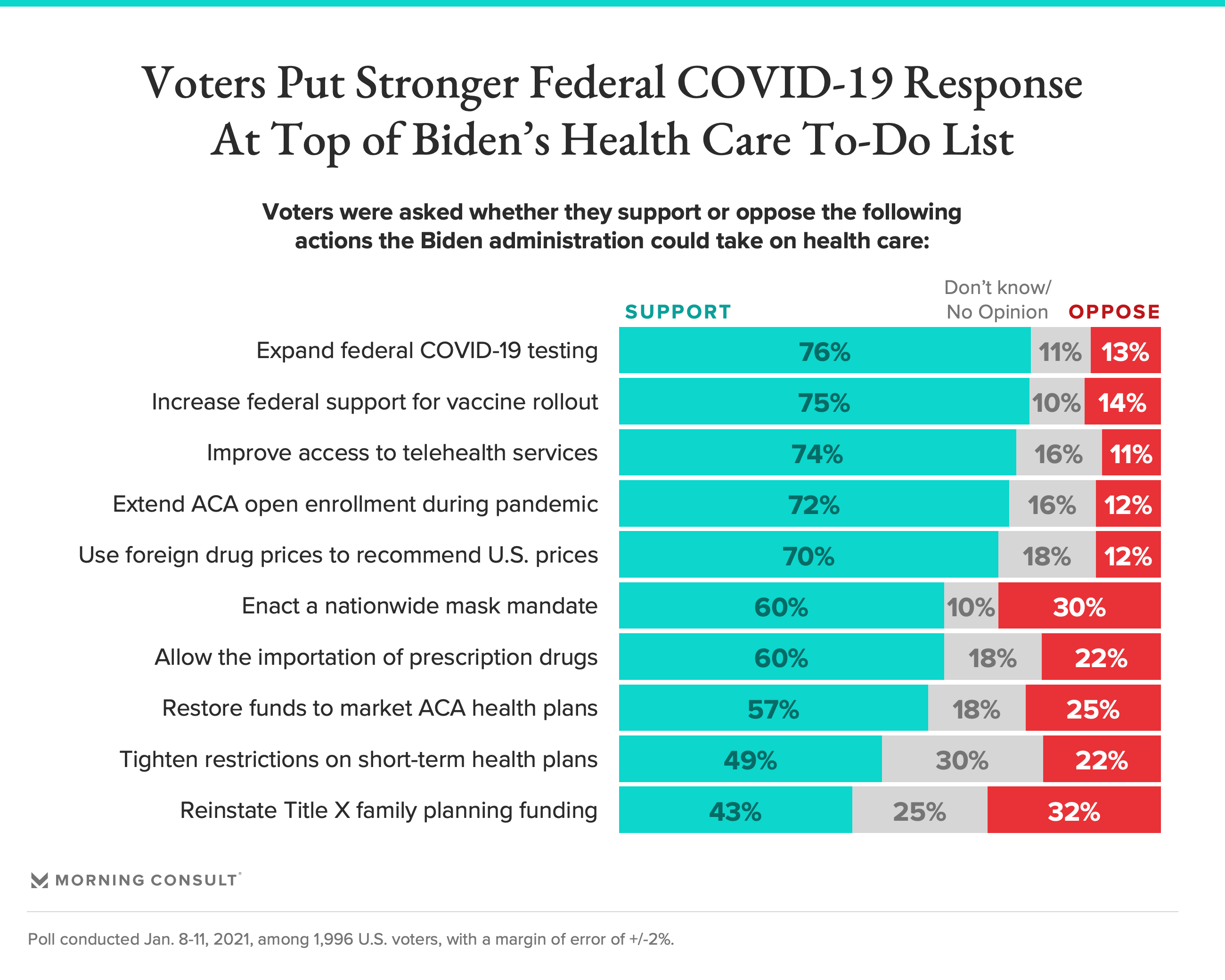 Other issues, like pandemic relief, immigration and climate change, will also be vying for the president’s attention and could affect the timing of any health care orders. Managing the COVID-19 pandemic is expected to take precedence over all else, and voters are on board: 75 percent said controlling the spread of the virus should be a top priority for the Biden administration’s first 100 days, while 68 percent said implementing a strong vaccine distribution plan should also be at the top of the to-do list.

And while Democrats were more likely to say so than Republicans, most voters of both parties said they would support expanding federal support for COVID-19 testing and vaccination efforts.

Yet while 60 percent of voters, including 82 percent of Democrats, said they strongly or somewhat support a nationwide mask mandate, 55 percent of Republicans were opposed to such an order.

Meanwhile, 35 percent of voters said reversing Trump’s decision to leave the World Health Organization, which Biden vowed to do on his first day in office, should be a top priority.

The survey was conducted Jan. 8-11 among 1,996 voters, and has a margin of error of 2 percentage points.