They also had some harsh words for the American public 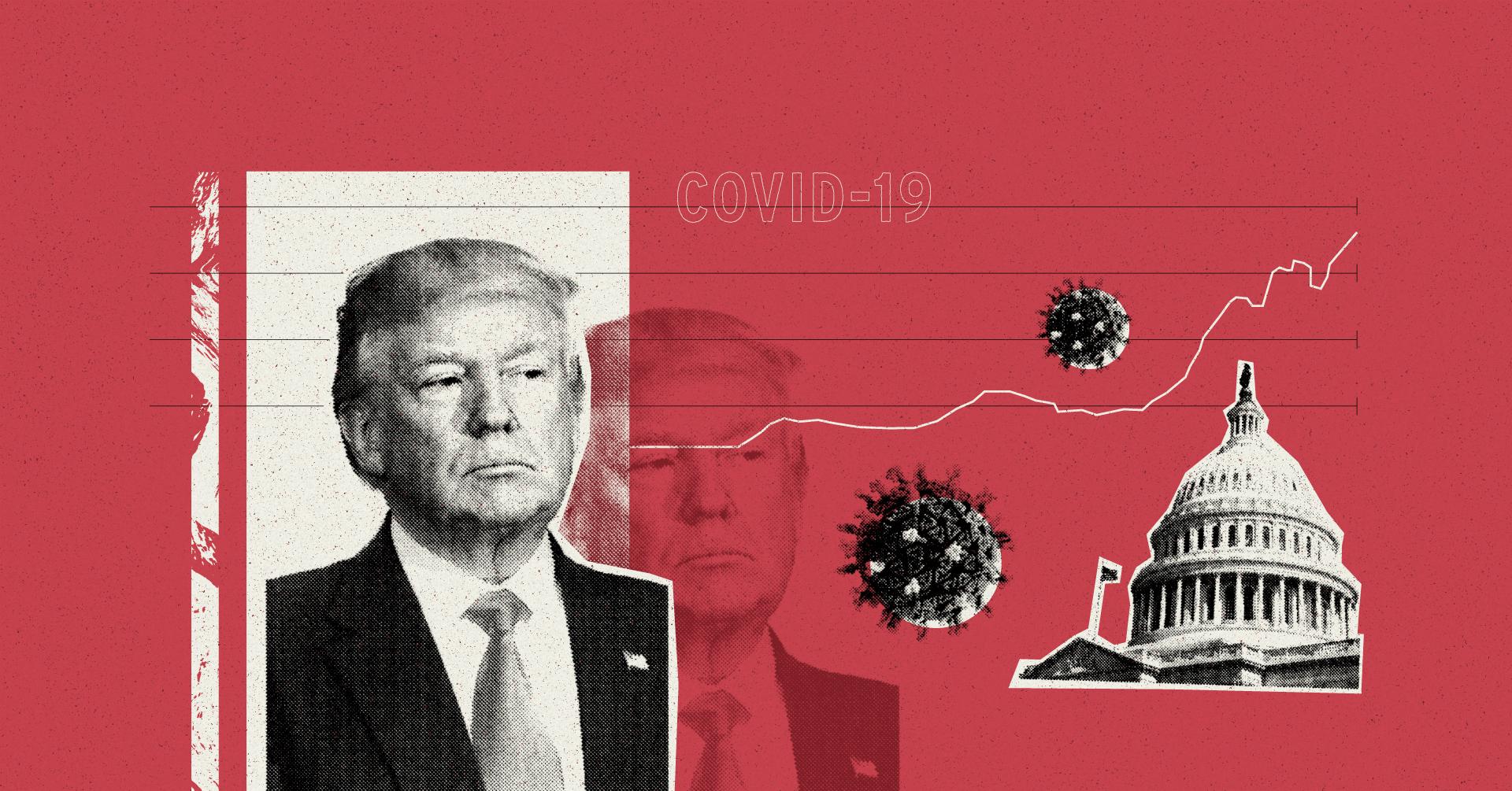 Few have done enough to curb the pandemic, health care workers say — and the list of those who have doesn’t include the country’s political leadership, local governments or even the American public.

Health care workers have been front row to a pandemic that has killed more than 400,000 people in the United States in just one year. President Joe Biden, sworn in last week and tasked with leading the country out of the pandemic, and Donald Trump, whose presidency saw both record vaccine developments and record death levels, have pushed divergent strategies to tackle COVID-19, with Trump leaning heavily on states to coordinate the response and Biden promising a stronger federal role.

How successful Biden will be is yet to be seen, but with Trump out of office, the consensus among most health care professionals is that he, along with other public leaders, failed.

In all, 65 percent of health care workers disapproved of how Trump handled the pandemic and an equal share said his administration was not doing enough to respond to COVID-19, while 62 percent looked poorly on Congress’ efforts, according to a new Morning Consult survey of 1,000 health care professionals conducted Jan. 4-9. Another 30 percent approved of Trump’s handling of the pandemic, while 25 percent approved of Congress’ approach. 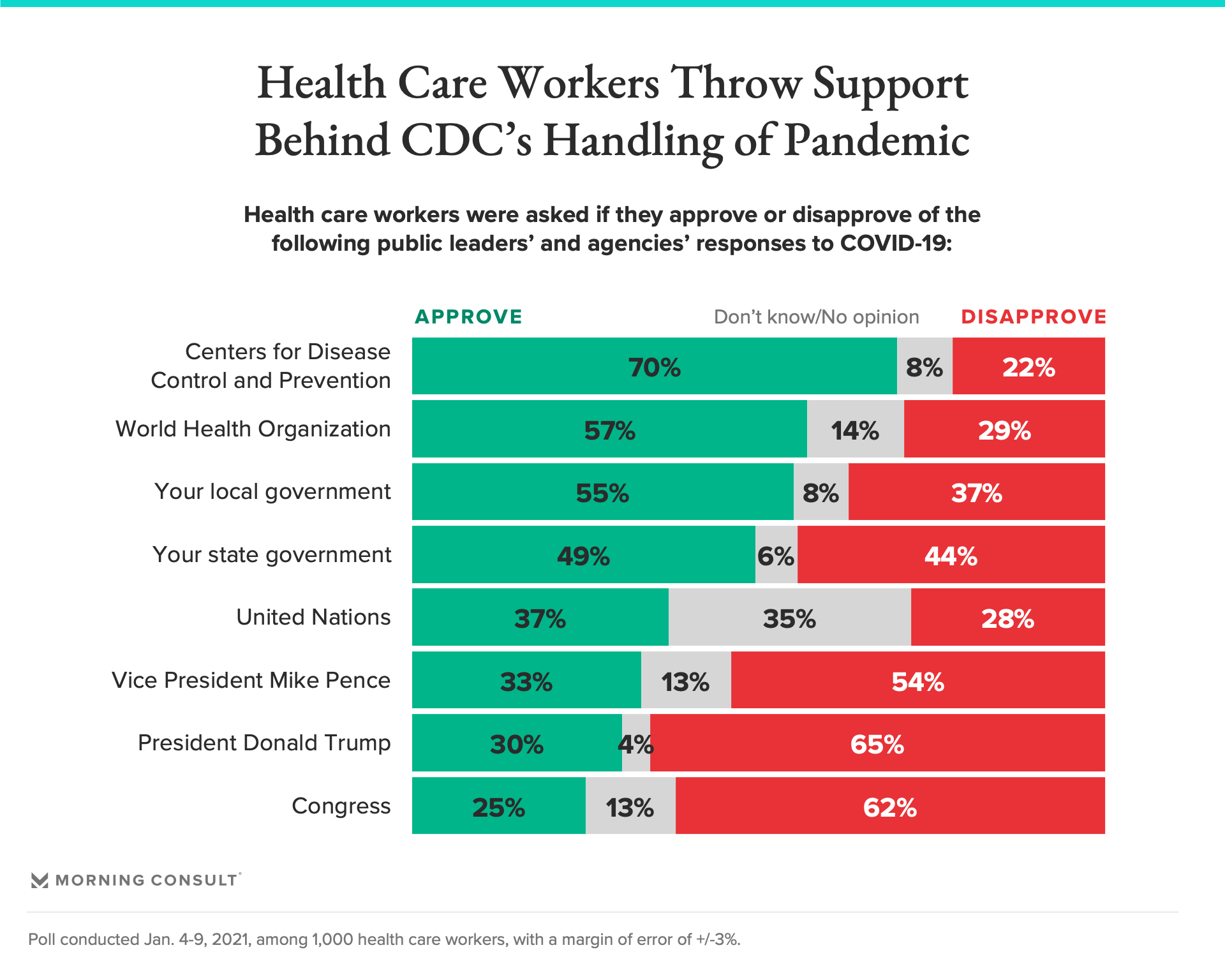 Health care workers were most likely to approve of the Centers for Disease Control and Prevention’s handling of the pandemic, at 70 percent, and to say the agency is doing the right amount to respond to COVID-19, at 55 percent. But another 27 percent said the CDC is not doing enough, and 9 percent said it’s doing too much.

Medical workers were split on the COVID-19 efforts from leaders closer to home: 49 percent and 55 percent approved of how their state and local governments, respectively, have handled the pandemic. Health care workers were only slightly more likely to say their state leaders were doing enough to respond (41 percent) than to say they were not doing enough (37 percent). Meanwhile, 15 percent said their state’s governor was doing too much to address COVID-19.

When it came to global institutions, 37 percent of medical professionals approved of how the United Nations has tackled COVID-19, and 57 percent approved of its main health agency, the World Health Organization.

Health care workers didn’t spare the American public from scrutiny, either, with 68 percent saying people were not doing enough to combat the pandemic. In an open-ended portion of the survey, health care workers were generally frustrated with the lack of adherence to masks and social distancing, with one responding that “many Americans dont [sic] take this seriously enough and are increasing the spread” and another saying “they need to wear masks and take the politics out of all of it.”

While health care workers generally agreed on the importance of masks, they were split on whether that meant people could safely do things like run errands and interact with others, with one health care worker saying “do whatever you want, but mask up” and another saying people “need to wear masks and avoid contact with each other.”

But not all health care workers were in agreement. One wrote that they think “the federal government is doing too much in response to this virus” and that efforts to contain it are “only about control and oppression of the American people.”

On the flip side, one health care worker suggested that the government “arrest and jail the non mask wearers.”