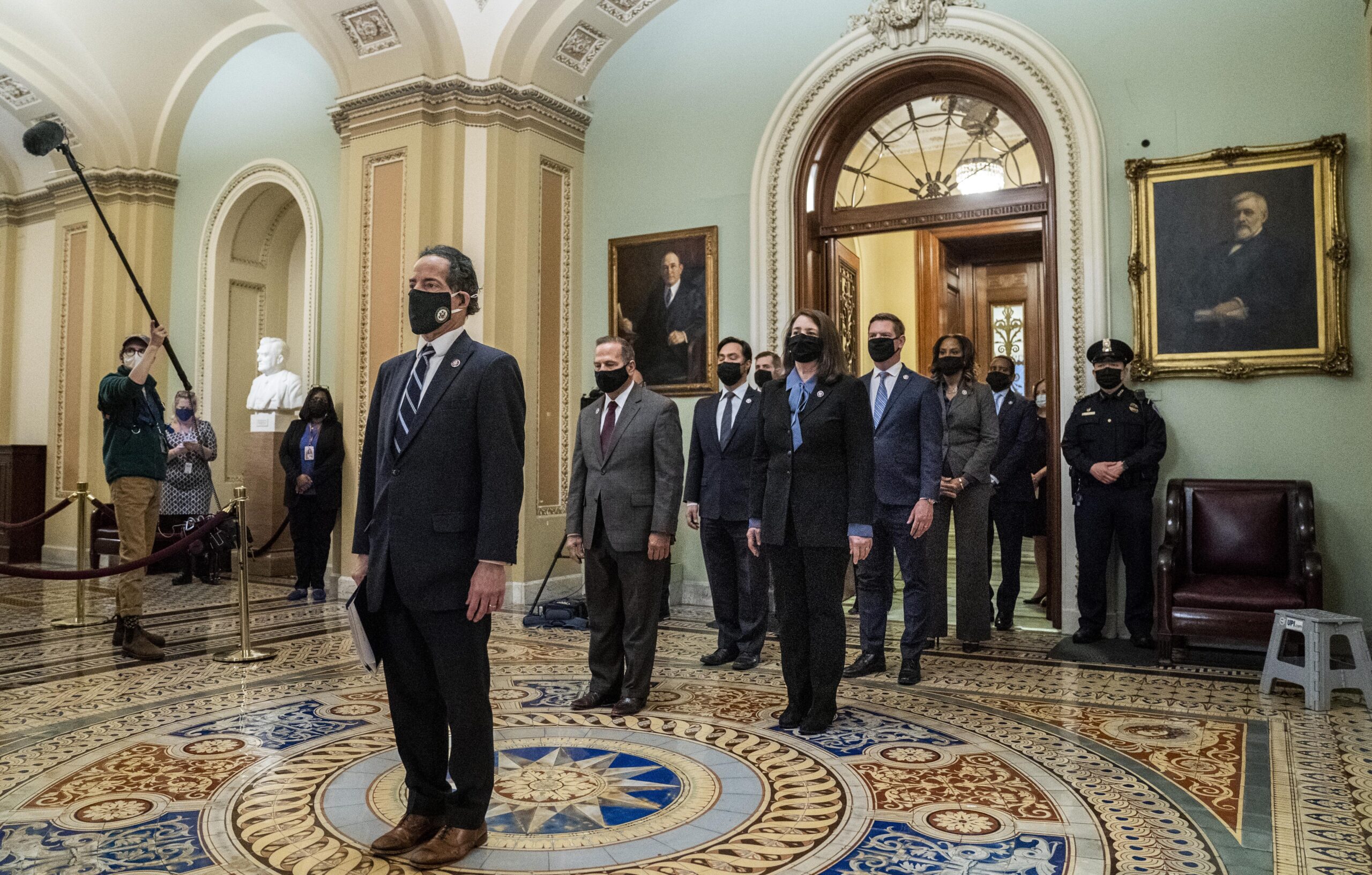 Rep. Jamie Raskin (D-Md.) and the House's other impeachment managers leave the Senate floor after delivering the article of impeachment for former President Donald Trump on Monday. Ahead of the Senate's impeachment trial, which is set to begin the week of Feb. 8, new Morning Consult polling shows a majority of voters continuing to back a conviction. (Melina Mara-Pool/Getty Images)
By Eli Yokley

Former President Donald Trump’s impeachment trial is not set to begin until next month, but Tuesday’s events on the Senate floor made one thing clear: The already small window of opportunity for Democrats to secure the 17 Republican votes needed in order to convict No. 45 is closing rapidly — if it’s not already shut.

In a 55-45 vote, all but five Republican senators voted with Sen. Rand Paul (R-Ky.) to declare the whole process unconstitutional. It was a signal of fealty to the former president that comes as his nationwide popularity improves among Republican voters, who increasingly want him to play a major role in the party going forward and said they would strongly disapprove if he were convicted for his role in inciting the Jan. 6 insurrection on Capitol Hill.

According to a new Morning Consult/Politico poll, the share of Republican voters who say the 45th president should play a “major role” in the future of the GOP increased 9 percentage points, to 50 percent, compared to a survey conducted in the immediate aftermath of the Jan. 6 riot. The shift was driven by a 15-point increase among women in the party (41 percent to 56 percent). 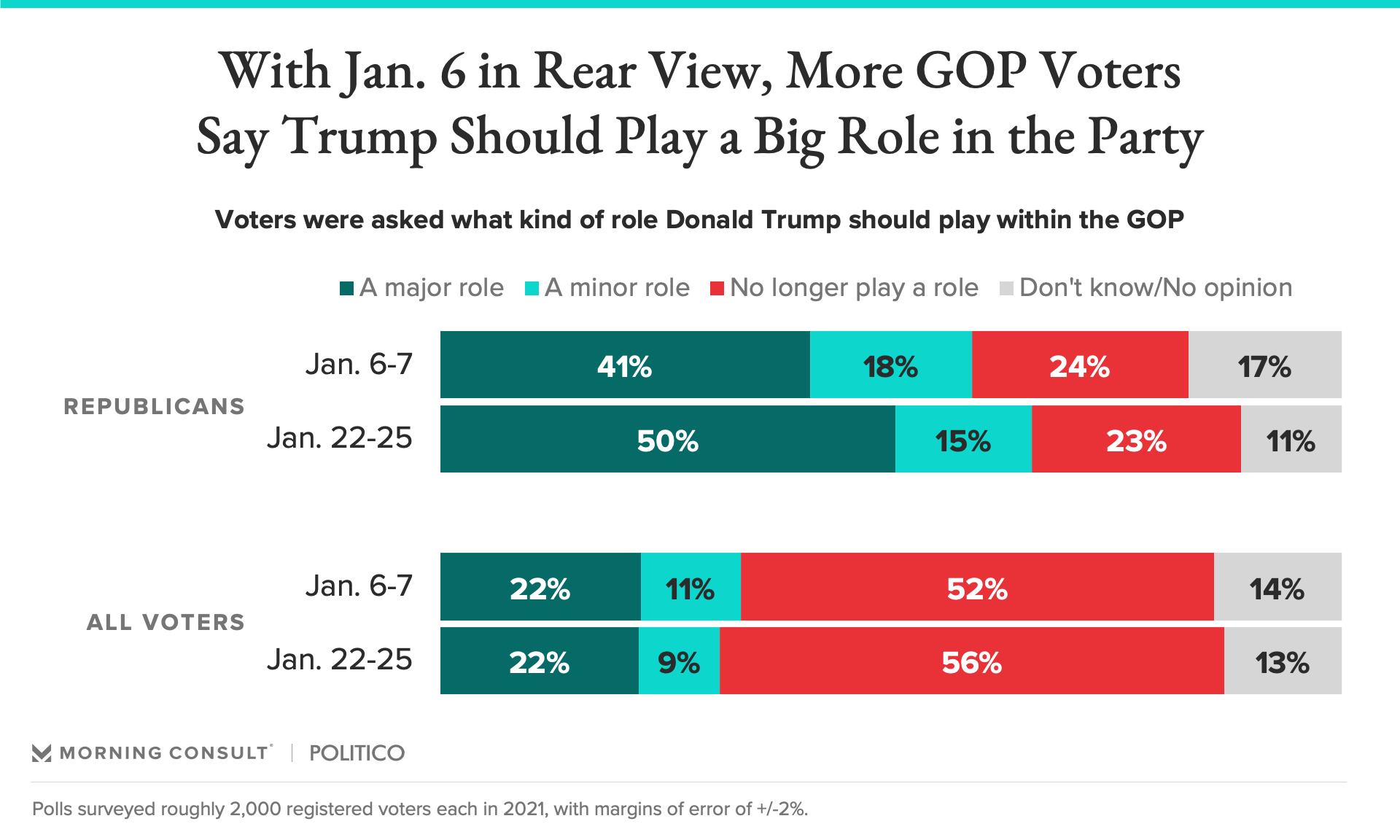 At the same time, Morning Consult Political Intelligence tracking of Trump’s intraparty favorability rating, conducted Jan. 23-25 among 4,296 Republican voters, found 81 percent hold positive views of Trump, including 54 percent who do so strongly. It marks an improvement from a 76 percent low measured Jan. 10-12, when the share who strongly favored him bottomed out at 49 percent on the eve of his second House impeachment.

Since leaving office, Trump has already sought to use his influence with the party’s voters — though in a positive way, for now: On Monday, he endorsed Sarah Huckabee Sanders — a loyal aide who served as White House press secretary — in a Republican primary for governor of Arkansas. But he has also floated abandoning the GOP altogether in order to start another party, the “Patriot Party,” as the Wall Street Journal reported earlier this month.

The Jan. 22-25 survey — which was in the field as a Trump political adviser was quietly reassuring Senate Republicans that the former president would not opt to start a third party and instead plans to focus on throwing his weight around the GOP, according to Politico —  concluded just before the House delivered articles of impeachment to the Senate, kicking off a timeline set by Senate leaders for Trump’s trial to begin the week of Feb. 8.

Tuesday’s vote was yet another example highlighting congressional Republicans’ awareness of the political risk they face in crossing Trump and angering the party’s base. The support among Republican voters for the president is matched by their opposition to his conviction in the Senate’s upcoming trial: 75 percent said they would disapprove of the Senate taking the step, including 67 percent who would “strongly disapprove,” compared with just 18 percent who would back it. 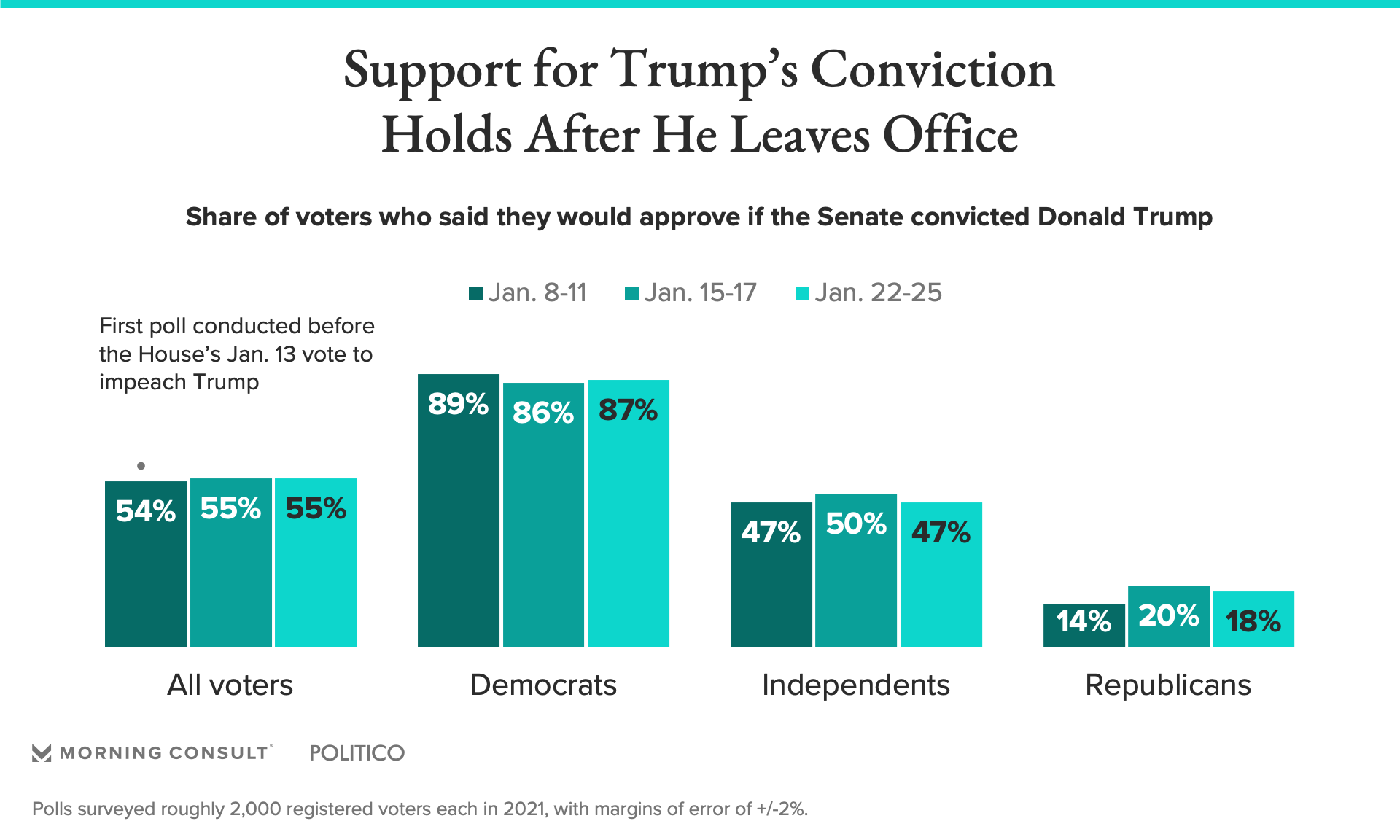 Overall, 55 percent of registered voters said they would approve if the Senate voted to convict Trump, while 37 percent would disapprove.

The survey, conducted in the first few days of the Biden administration, mirrored the findings of two previous polls taken in the immediate aftermath of the Capitol riot and after the House’s Jan. 13 vote to impeach Trump, a week before President Joe Biden took office.

Among Democrats, Republicans and independents, support for Trump’s Senate conviction went virtually unchanged between the three surveys, suggesting that the series of events that have transpired, including the impeachment vote and inauguration, as well as the information that has been revealed about the rioters’ political motivation over the course of nearly three weeks, have done little to change anyone’s mind.