44% of Super Bowl partygoers plan on serving or drinking light beer during the game; 22% will crack open hard seltzers Forty-four percent of those likely to host or attend a Super Bowl LV party said they plan to drink or serve light beer on Sunday, while 22 percent said they'll have hard seltzer on hand. (Getty Images / Morning Consult artwork by Vladimir Gorshkov)
By Alyssa Meyers

Hard seltzer, which started its meteoric rise as a beverage mostly associated with young women, has now infiltrated fridges across the country.

After taking the United States by storm during the summers of 2018 and 2019, fizzy and low-calorie alcoholic drinks have since proven they’re more than a warm-weather fad. Now, hard seltzer has emerged as a game day favorite, but still has a ways to go to match the popularity of beer on Super Bowl Sunday, according to a new survey from Morning Consult. 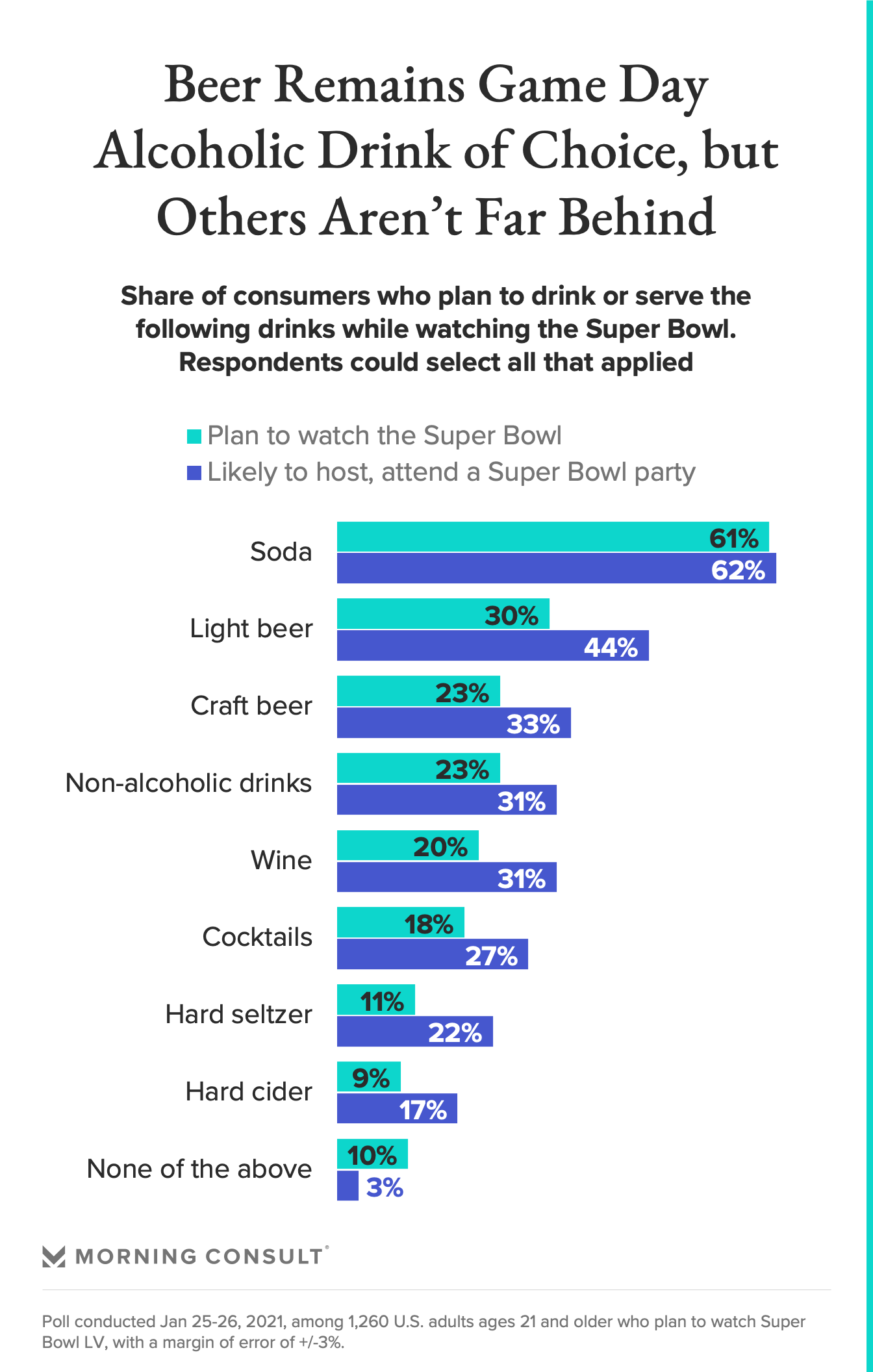 Beer is still America’s alcoholic drink of choice for the NFL’s biggest game of the year: Forty-four percent of those likely to host or attend a Super Bowl LV party said they plan to drink or serve light beer during the event, and 33 percent said they’ll have craft beer available.

But hard seltzer — whose flavors include mango, lime, black cherry and many more — is about as popular as other boozy drinks, with 22 percent of likely Super Bowl party attendees saying they’ll have cans on hand Sunday. That’s in line with the shares who said they’ll serve other drinks, such as wine, cocktails and hard cider.

“Hard seltzer is becoming the new light beer,” said Ron Alvarado, co-founder and chief executive of California-based hard seltzer maker Ficks Beverage Co. “A lot of people didn’t like the taste of light beer, but would drink them anyway because they’re lower in carbs.”

Among those likely to gather for Super Bowl LV, most plan to pair their drinks with the usual game-day eats: chips and dip, pizza and chicken wings. The survey, which carries a margin of error of 2 percentage points, was conducted Jan. 25-26 among 2,200 U.S. adults.

While the early hard seltzer favorites arose from independent brewers, major brewing operations have taken notice of consumer interest in the last year and are dumping resources into promoting fizzy alcoholic drinks of their own. 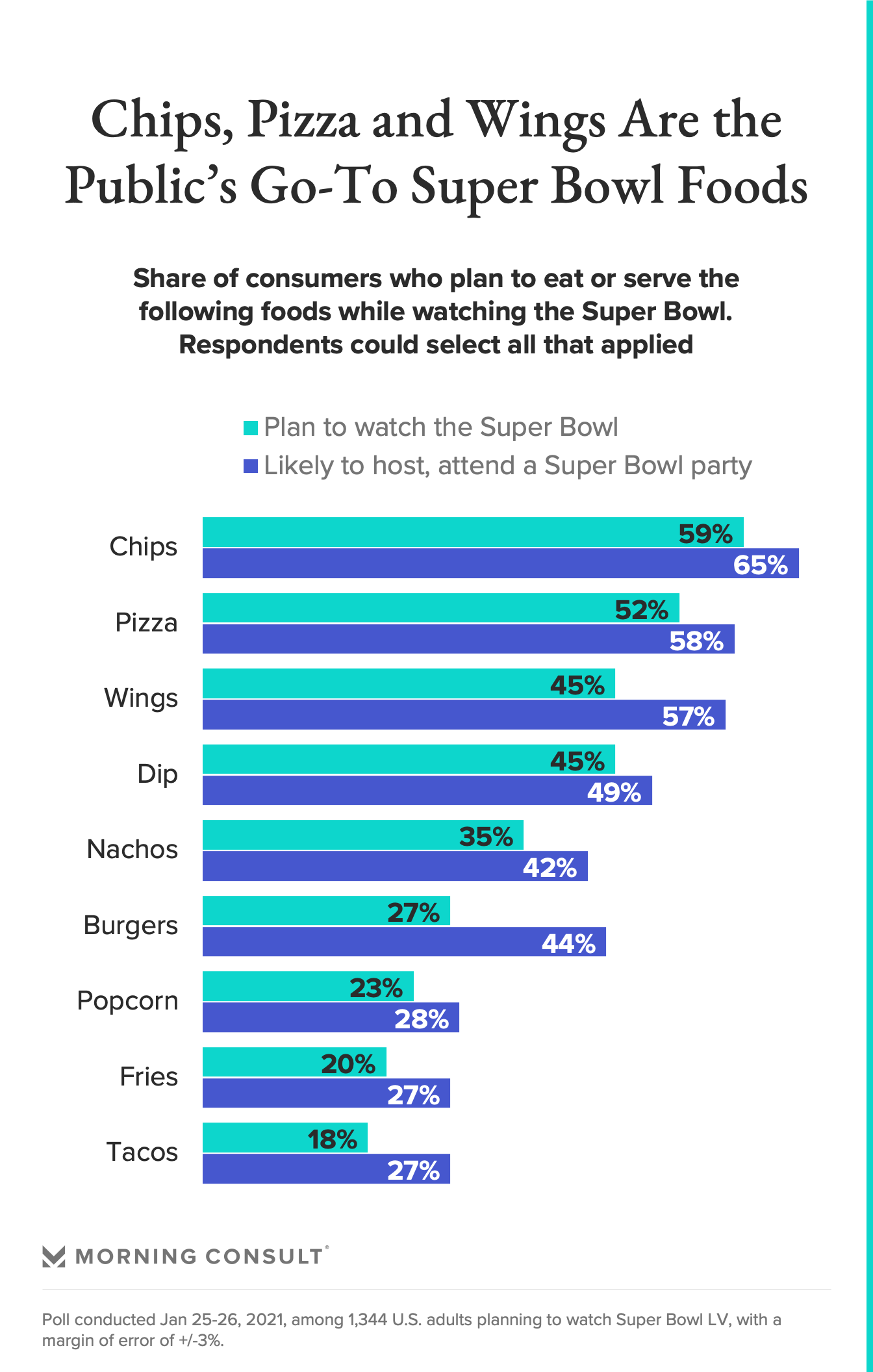 Anheuser-Busch InBev AB, the largest brewer in the country, devoted Super Bowl ad time to its hard seltzer brands for the past two years, and is doing so again this year with Bud Light Seltzer and Michelob Ultra Organic Seltzer, despite the fact that its Budweiser brand — a Super Bowl ad favorite — will pass up its annual slot on Sunday for the first time in 37 years.

Hard seltzer also appears to be cutting into the beer and liquor markets year-round.

Hard seltzer drinkers decreased their spending on beer by 5.6 share points year over year last March and April, according to Nielsen, which this summer called hard seltzer “the most resilient segment within the entire alcoholic beverage industry” amid the pandemic.

Between bars being closed and increased outdoor socialization, sales of canned beverages, including seltzer, boomed during the pandemic, said Brandy Rand, chief operating officer of the Americas at IWSR Drinks Market Analysis, which tracks the global alcoholic beverage market.

Hard seltzer consumption in the United States grew 142 percent by volume between 2019 and 2020, according to the IWSR’s Global Ready-to-Drink Alcohol Strategic Study. Forecasts through 2024 indicate hard seltzers and other canned drinks are likely to outpace year-over-year growth of all other beverage alcohol categories, Rand said in an email to Morning Consult.

“I would say that hard seltzers are consumed for all occasions across all demographics, not just sporting events,” Rand said. “People want flavorful refreshment.”

Alvarado said same-store hard seltzer sales for Ficks were up more than 100 percent year over year in 2020 — with 90 percent of last year’s sales coming from grocery stores — so the company is in a good position early this year. Still, he worries the lack of big Super Bowl parties could spell trouble for hard seltzer sales.

Beryl Jacobson, executive vice president, co-founder and chief strategic officer at Flying Embers, which is known for its alcoholic kombucha but launched a hard seltzer in July, said smaller gatherings could actually present an opportunity for alcohol categories going up against beer, and smaller alcohol brands in general.

“Without huge parties, people won’t just buy the 48-pack of the most common game day purchases,” Jacobson said. “People are going to buy what they like if they’re only drinking with two or three or five other friends.”

Conor Mason, senior brand director for Bud Light Seltzer, which is advertising its new lemonade seltzer line on Sunday with a spot called “Last Year’s Lemons,” declined to share Bud Light Seltzer’s specific sales numbers from the past year since its launch, but said parent company Anheuser-Busch is focused on the category’s growth.

“It’s going to play for pretty much every occasion going forward,” Hamill said of hard seltzer. “The category is hot, and I believe that’s going to continue.”