Even those watching solely for the game will be keeping an eye on the ads, but striking the right tone means different things for different audiences, Morning Consult’s Victoria Sakal writes. 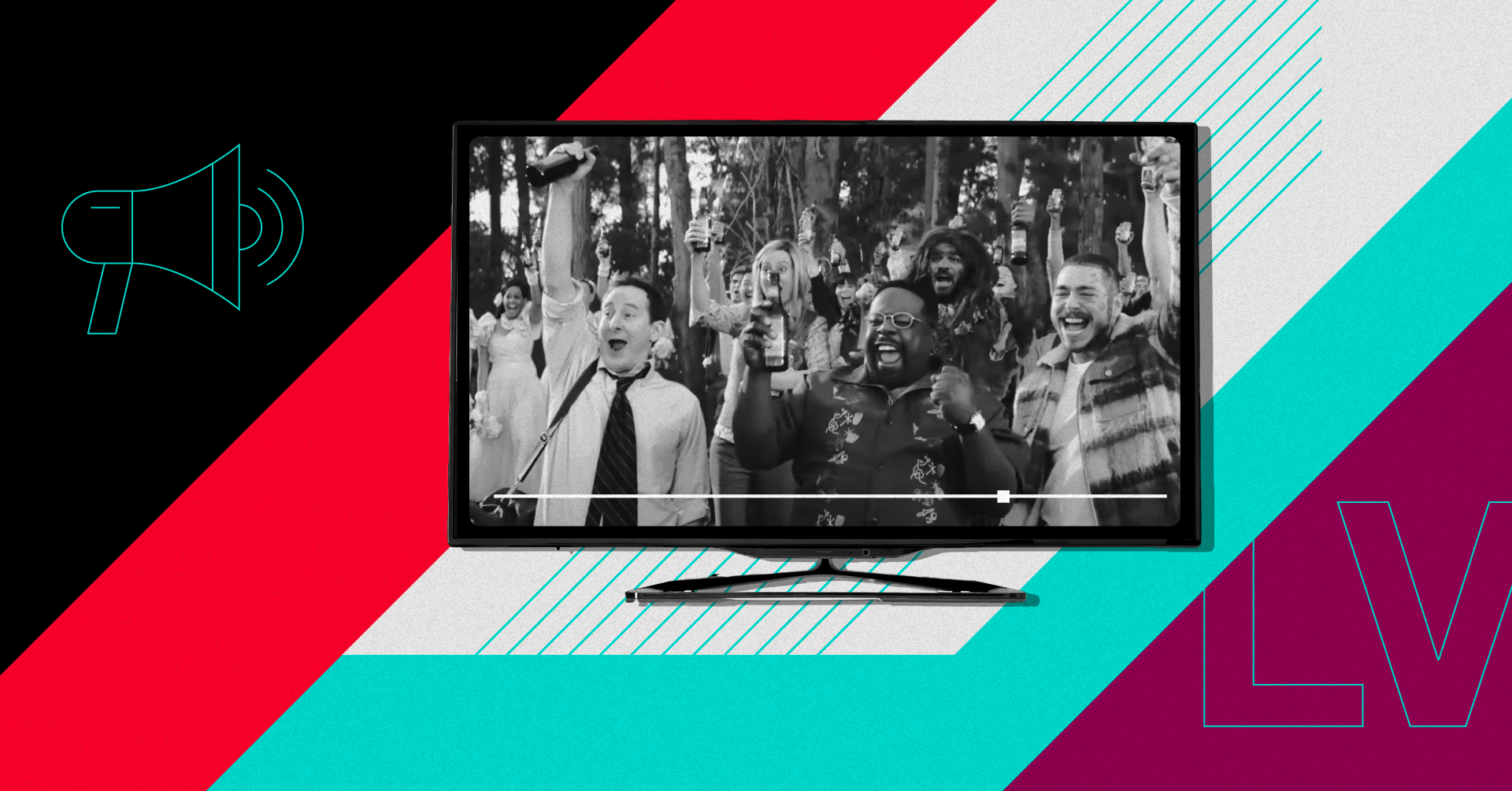 The Super Bowl is a mainstay of American culture, but this year’s game will look noticeably different in a couple of key ways, mirroring the unprecedented 2020 season amid a global pandemic. The usual pageantry associated with the Big Game will be muted, with just a fraction of the typical energy, noise, and attendees in place when the Kansas City Chiefs take on the Tampa Bay Buccaneers in Tampa Bay on February 7th for Super Bowl LV.

Super Bowl ads will look different, too, with many of the game’s usual advertisers opting instead to promote charitable causes. This year, a tired America is largely united around the nation’s top priorities for the year ahead but otherwise more polarized than ever. New Morning Consult research explores if and how this backdrop will translate to Super Bowl LV with an extensive look at who’s planning to tune in, why, and what they want to see from brands and in ads this Sunday.

One looming question advertisers have as they approach Super Bowl LV is how to market to an audience in the midst of a pandemic, with so many feeling stressed, anxious and depressed.

In general, ads reflecting our current reality — people wearing masks, practicing social distancing or even on video calls — would be significantly more likely to drive purchase likelihood than particularly non-compliant or unrealistic visuals including people not wearing masks, in large gatherings, gathering indoors, or even shaking hands. 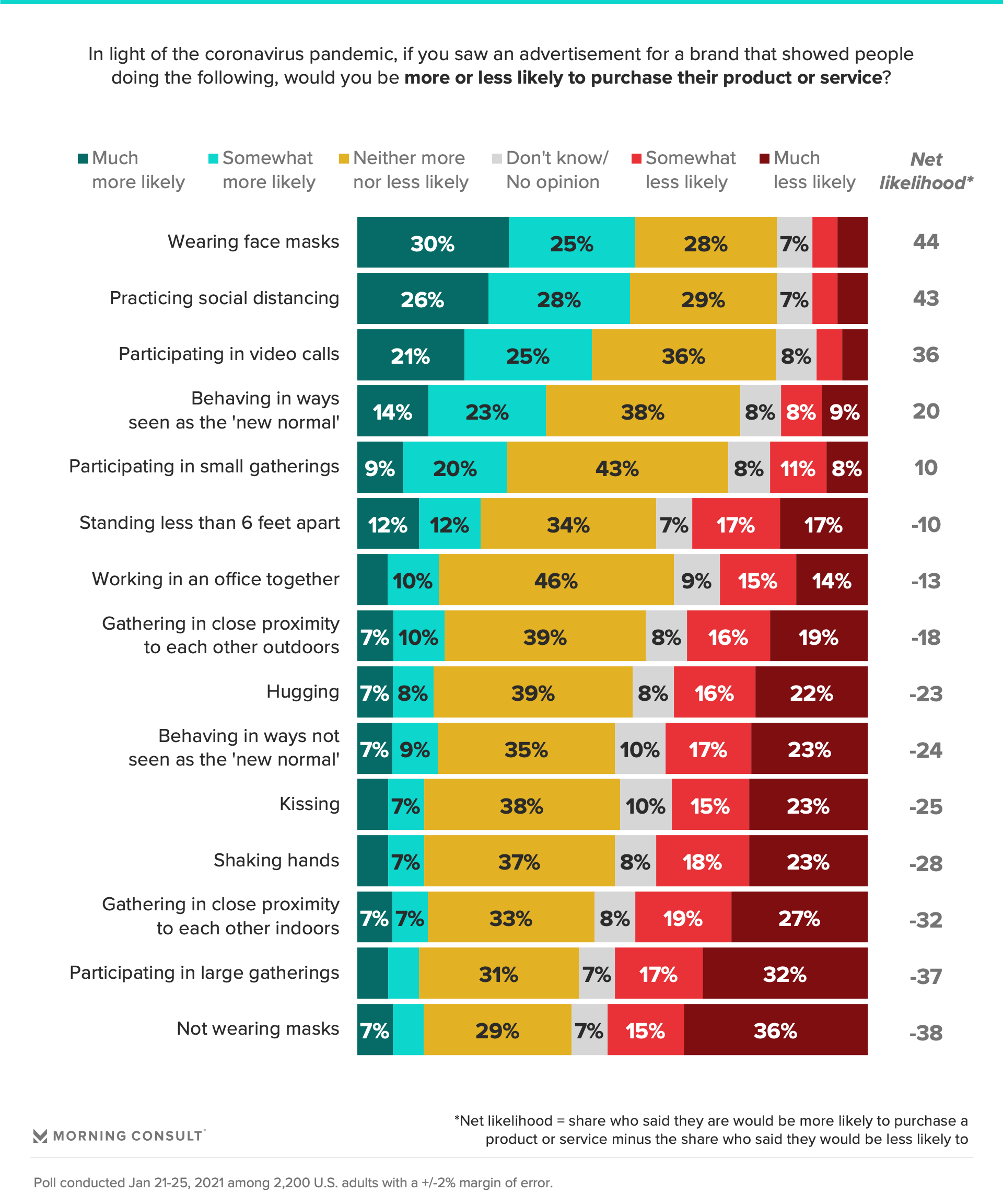 Amid this backdrop, funny, comforting, entertaining and optimistic ads would be most well-received by U.S. adults, with four in ten more likely to purchase from companies with these types of ads. Patriotic ads are most likely to negatively impact purchase likelihood, although for just 13 percent of the population. 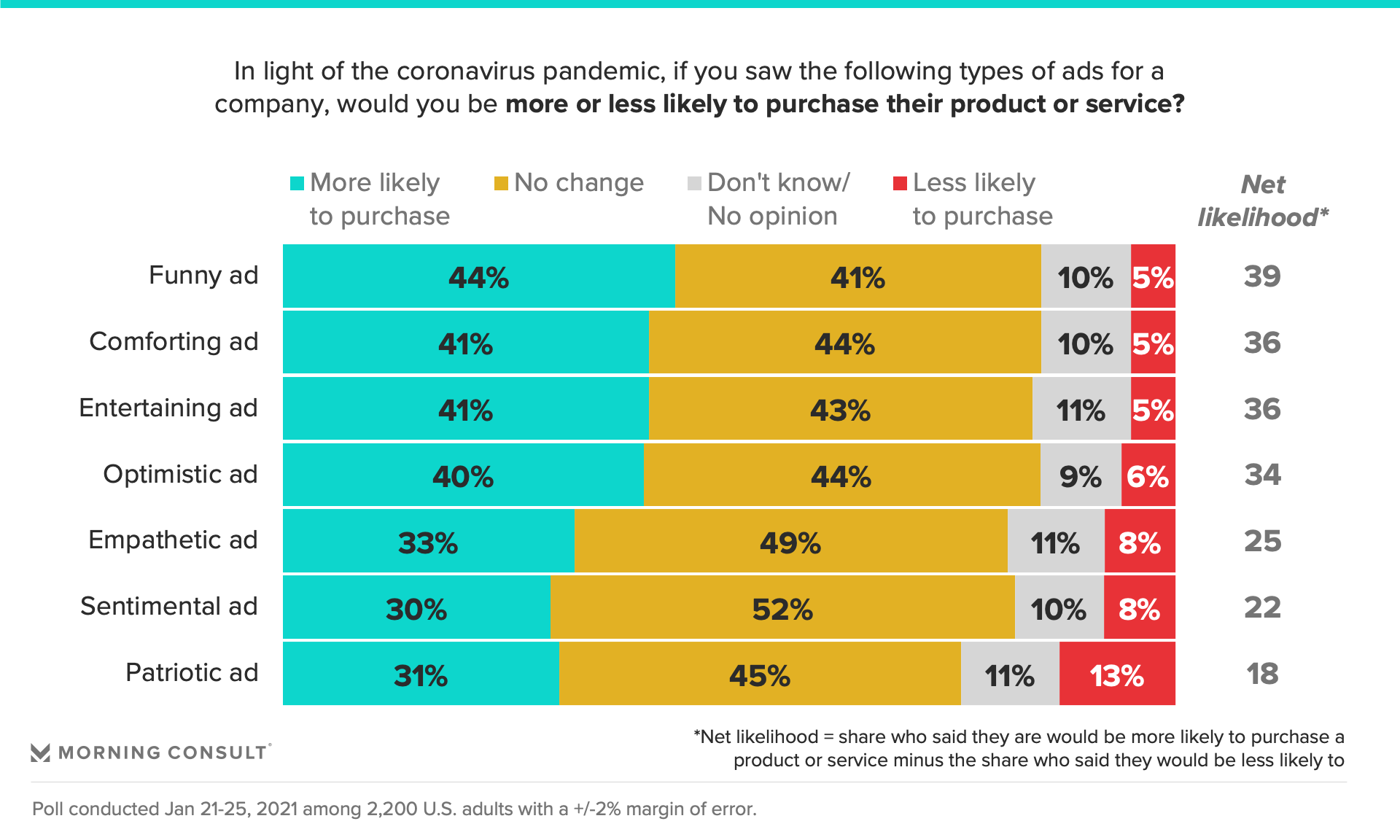 Ads about company values or featuring “people that look like me” also yield small net increases in purchase likelihood, presumably because these feel increasingly redundant: Companies shouldn’t have to talk about their values after a year of needing to activate around and demonstrate them, particularly when it comes to diversity, inclusion, and representation in their ads, in their organizations, or otherwise. 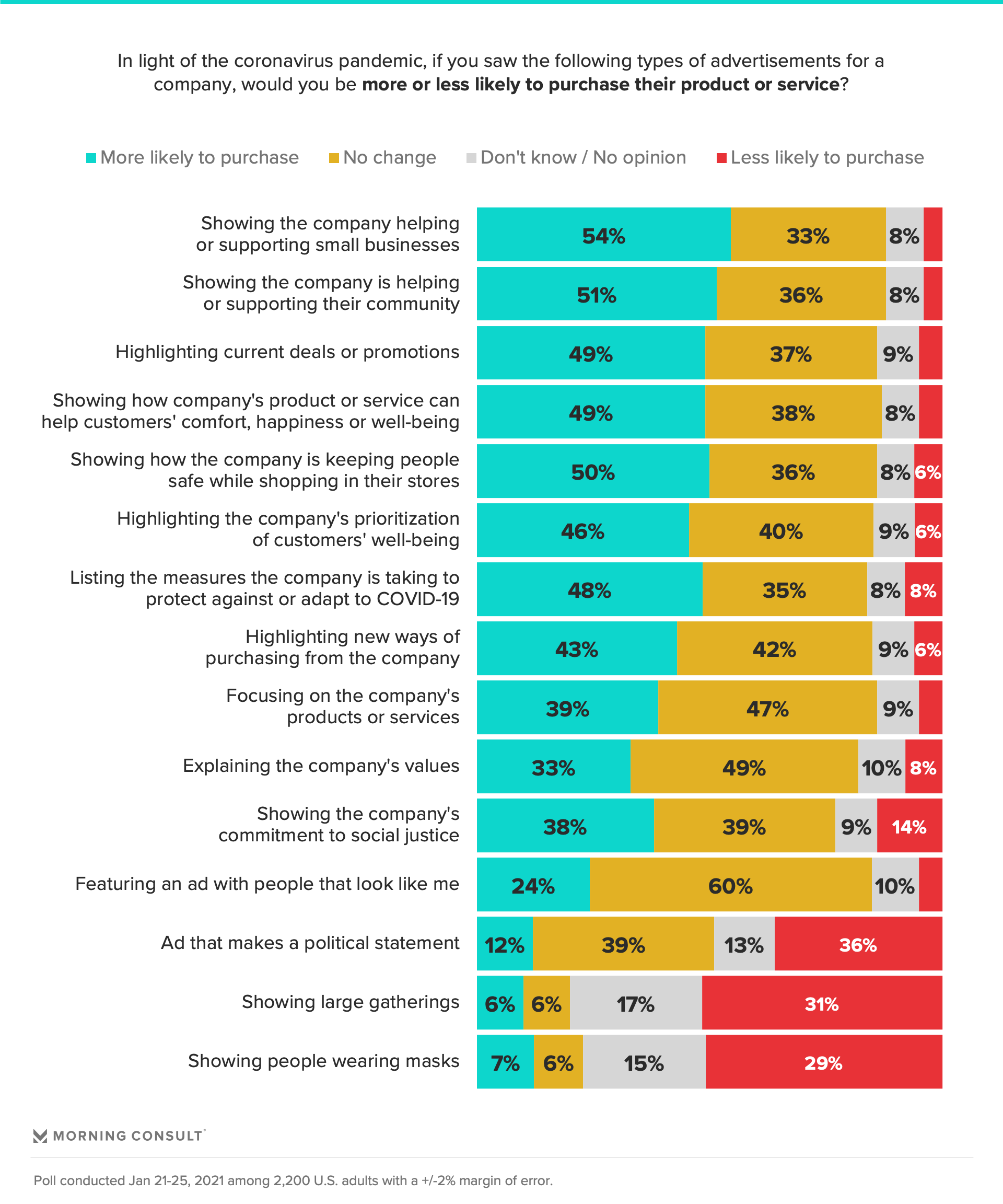 All eyes on the Big Game?

What, then, does this appetite for ads mean for one of the biggest advertising events of the year? Has a year of sitting on couches, celebrating milestones in isolation, and being tethered to TV screens led Americans to totally tire of sports and virtual concerts so much as to dent the big game’s viewership? Much to the relief of advertisers shelling out $5.6 million for a 30-second slot, it seems that 2021’s audience will be largely comparable to historic audiences.

Twenty-seven percent of Americans don’t plan to watch the Super Bowl this year. Of these respondents, most (84 percent) said they never usually tune in, but 8 percent said they used to pay some or a lot of attention to Super Bowl ads (the remaining 8 percent paid only a little attention, if any). Still, though the share not planning to watch the Super Bowl this year has increased by 4 percentage points from the 23 percent that don’t typically watch the game, a similar share of those planning to tune in will pay attention to the ads during this year’s game as is usually the case.

Who’s watching and why?

Whether it’s for the teams facing off, the halftime show, the national anthem — or even the guacamole — most Americans plan to tune in for the Super Bowl, as they’ve done for decades.

This year, as is often the case, the roughly six in ten Americans planning to watch the Super Bowl will do so for various reasons. Eighty-four percent cite the football matchup between the Chiefs and the Buccaneers as a reason for their expected viewership of Super Bowl LV, but 62 percent cite the game as the only or primary reason for watching. Thirty-eight percent cite ads and 35 percent will watch primarily for the halftime show.

Clear differences in the audience composition of each of these cornerstone features exist. 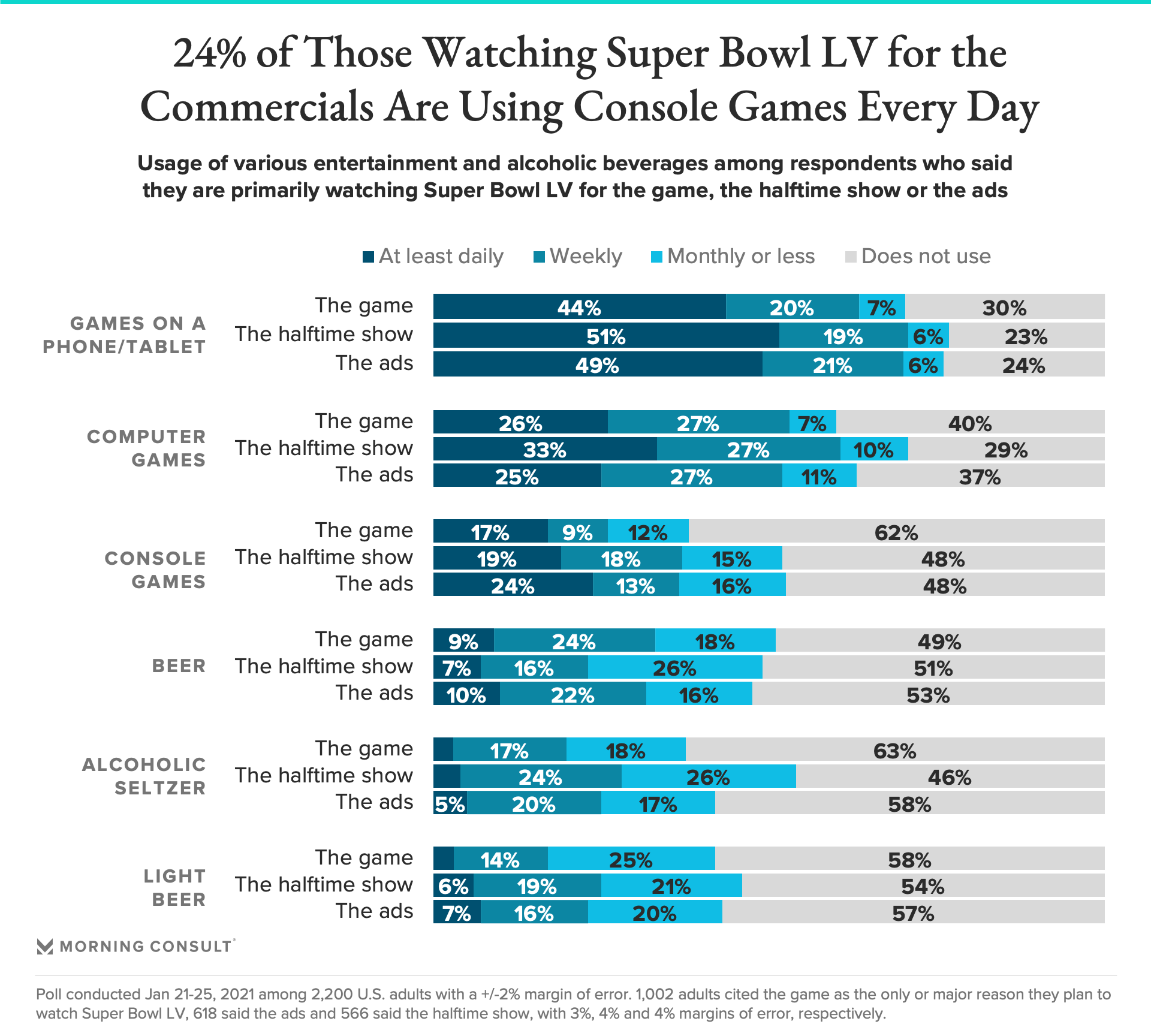 Still, political parties, education levels, income levels as well as regions and community types are all similarly represented across each of the three audiences.

Similar to prior years, while most Super Bowl viewers may be coming for the game, a significant share will be staying for the ads.

Overall, 56 percent of Americans — including 74 percent of those who traditionally watch the Super Bowl — said they’ll also be paying at least some attention to ads during the game. Indeed, regardless of respondents’ main reason for tuning in, they’re much more likely to say they’ll have a sharp eye on the ads than not. 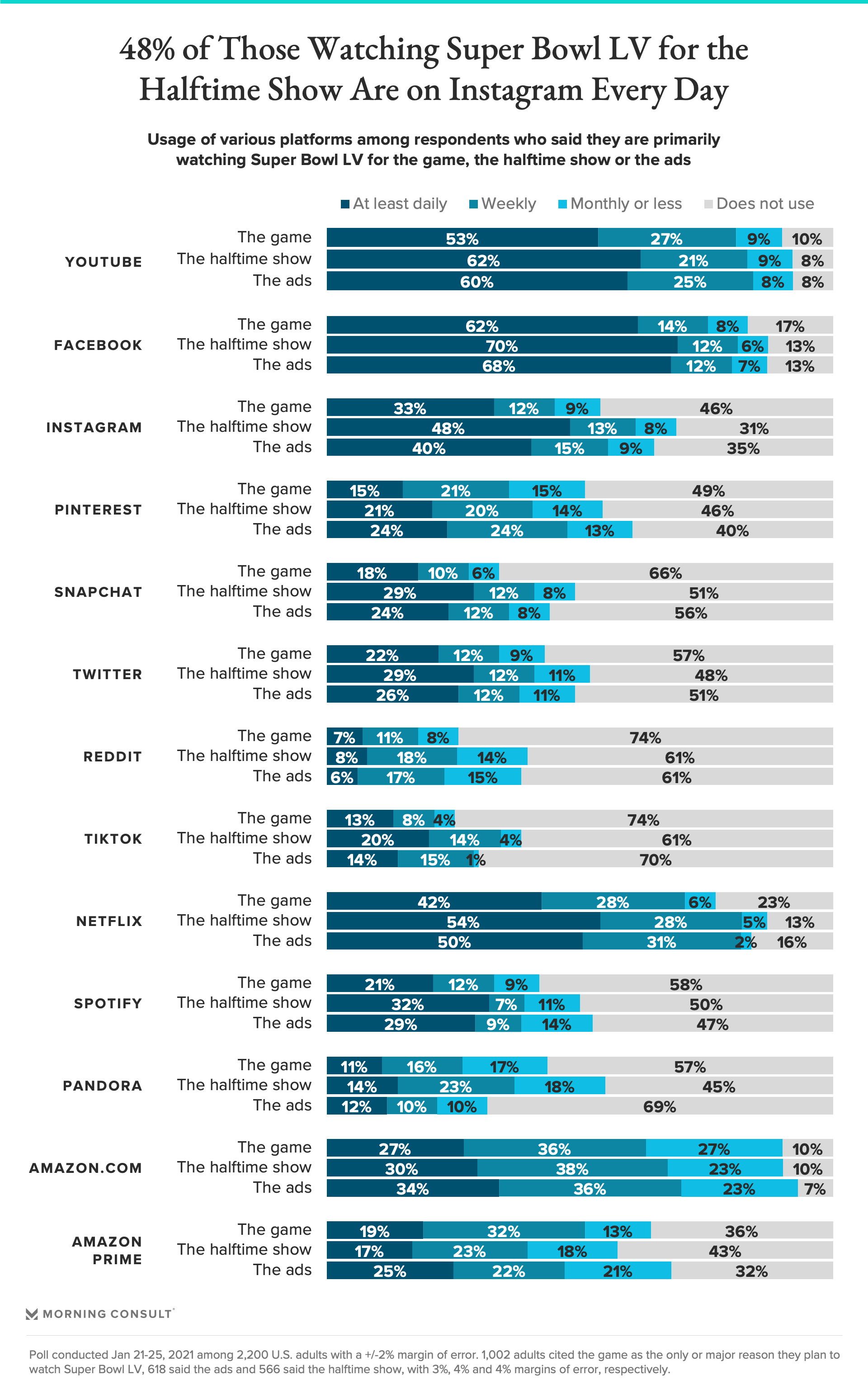 Historical likelihood to pay attention to ads, and Super Bowl viewership in general, increases with income and education level; the same holds for this year’s game. 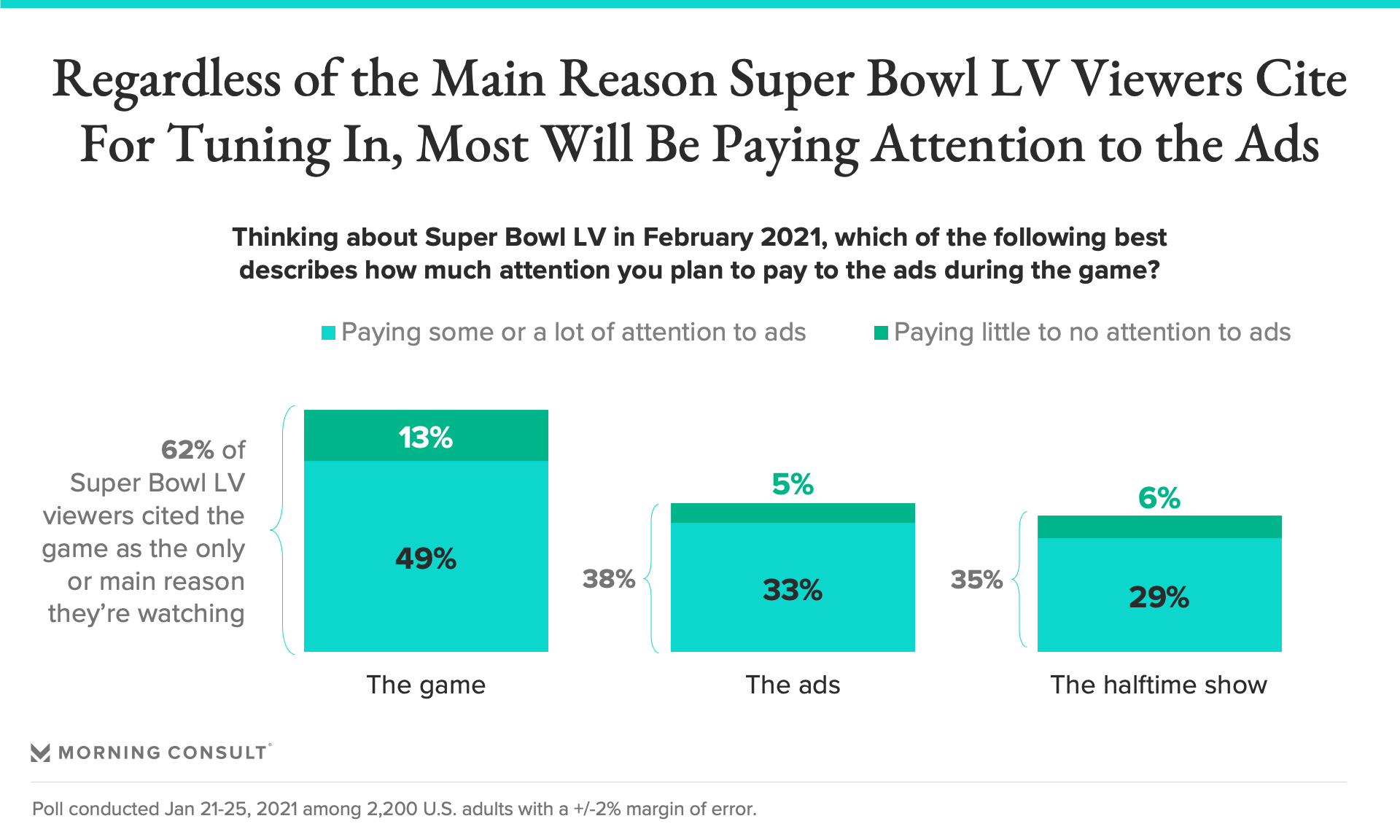 This is good news for advertisers increasingly able to reach more eyeballs with their ads, but in this era of economic, political, and health-related strife, this expanded audience adds complexity as these different viewers have nuanced preferences around the types of ads they do — and decidedly don’t — want to see this year.

The allure of ads

Seventy-six percent of expected Super Bowl LV viewers acknowledge ads as a reason they’ll be watching. Though a plurality (38 percent) say ads are a minor reason, three in ten (30 percent) cite ads as a major reason for watching the game this year, and 8 percent say commercials are the only reason they’re tuning in.

An appetite for activism…

Many consequential events defined 2020, but the resurgence of the Black Lives Matter movement was perhaps the most pronounced, if not the longest-overdue. Finally acknowledging the massive need for change around enduring racial injustices the NFL this year shifted its stance on protesting during the national anthem, with commissioner Roger Goodell indicating his support for players protesting racial injustice and police brutality by kneeling during the anthem.

More generally, 2021’s expected Super Bowl viewers — particularly those who are more likely to watch this year than is usually the case — are significantly more likely to consider it appropriate for brands to make political statements or promote social justice.

This sentiment also rings true for those watching the game primarily for the halftime show, many of which are racial or ethnic minorities, and 59 percent of which are younger adults (versus 28 percent of the halftime-first audience being Gen Xers and just 14 percent being Boomers). This is unsurprising given these viewers are characteristically more progressive audiences, creating an atmosphere where brands could get political without facing too much backlash among key consumer groups.

Indeed, those who say the halftime show is a sole or major reason they’re watching this year’s Super Bowl are significantly more likely to say they’d enjoy ads promoting social justice (62 percent) or those discussing the pandemic (53 percent) as well as ads making a political statement (36 percent would enjoy these) or those discussing the 2020 election (34 percent).

…Or looking for levity?

After a year like 2020, there is one thing all viewers can agree on: the need for some levity and laughs. 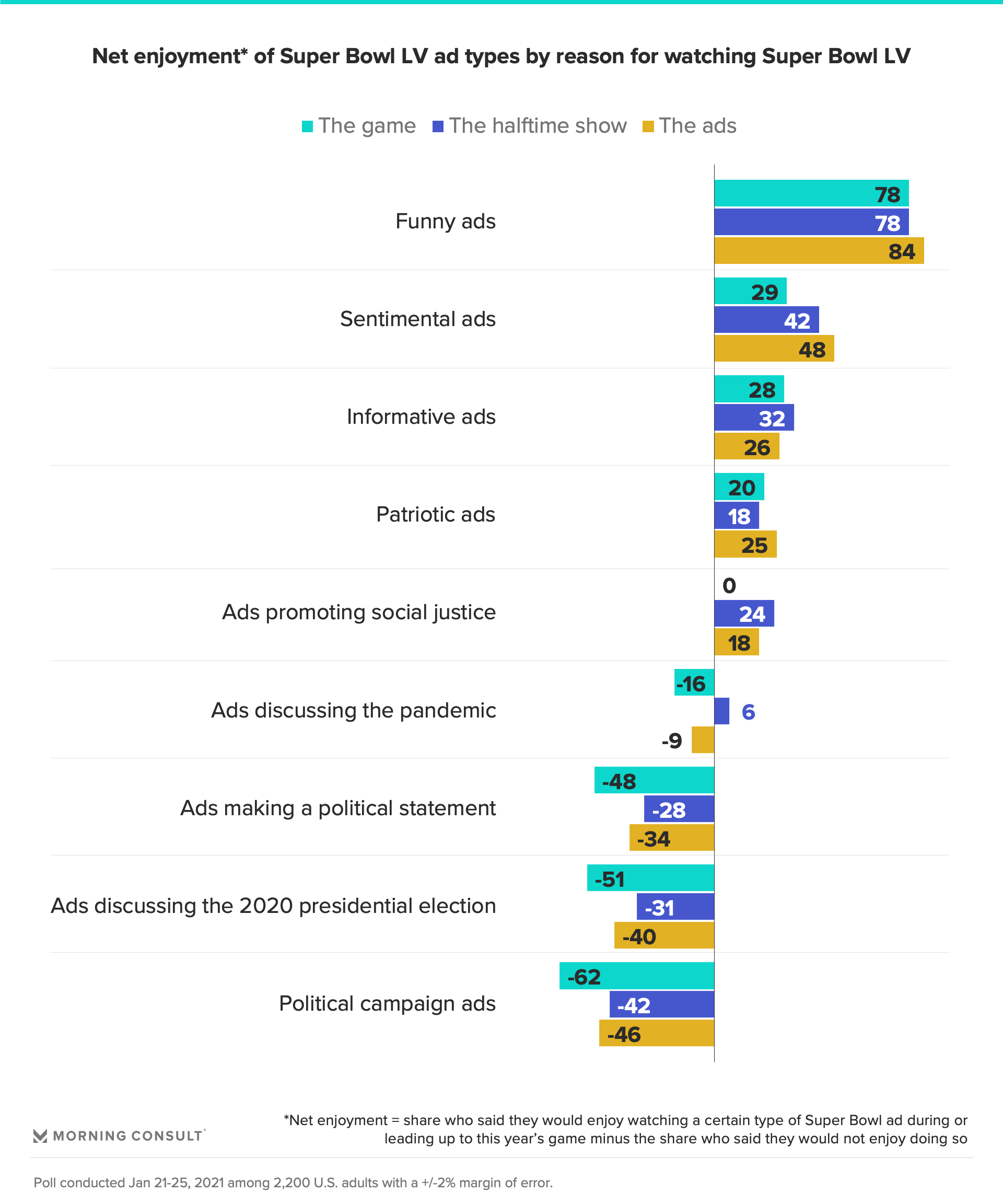 Across the board, most want to see funny ads this Super Bowl, though sentimental and informative would also yield net positive enjoyability: Those who usually pay some or a lot of attention to Super Bowl ads, those planning to do so during this year’s game, and anyone citing ads as a reason for watching the game this year (even if just a minor reason) are all significantly more likely to say they will enjoy funny, sentimental, informative, and patriotic ads. 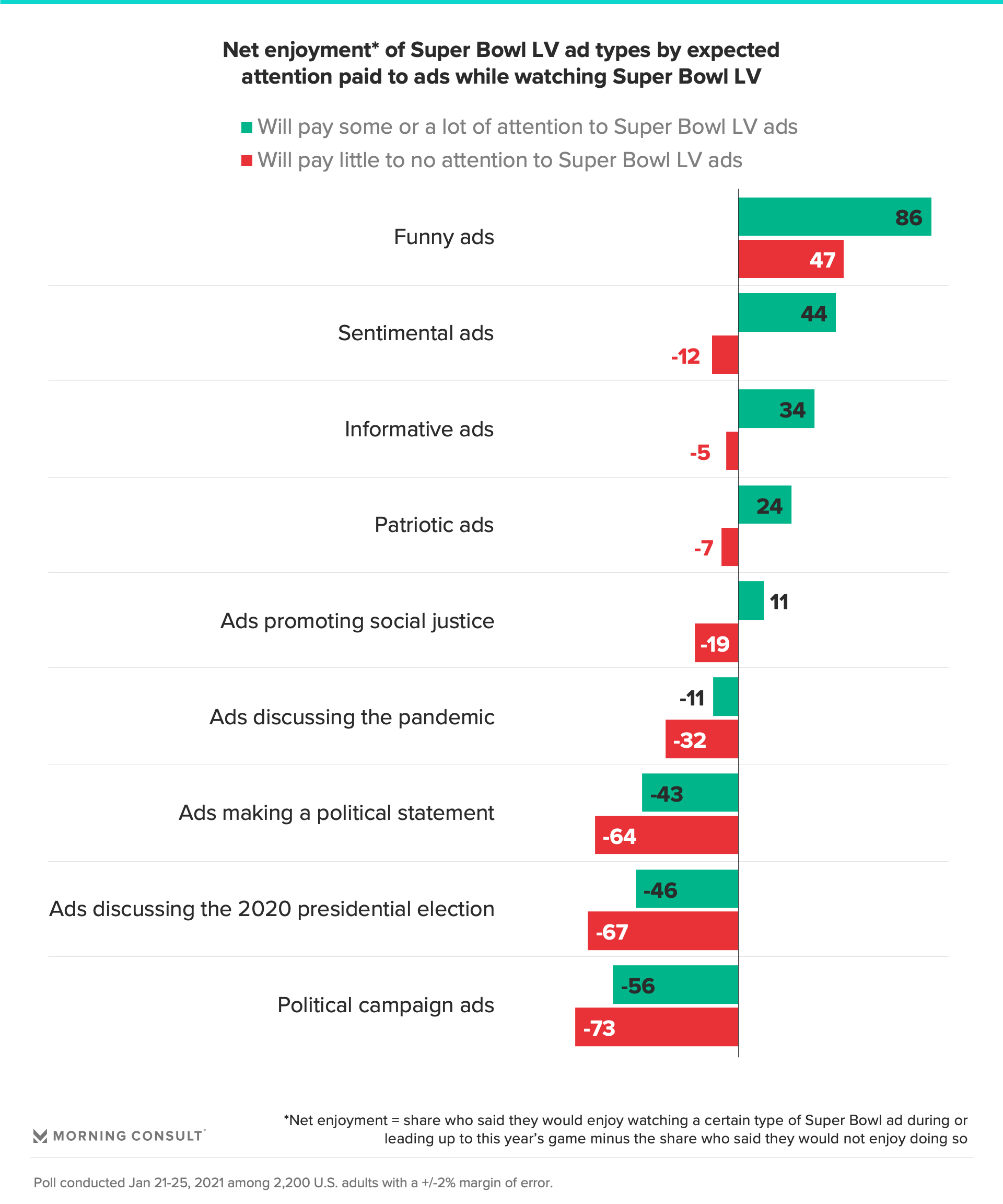 Super Bowl ad super-fans — those who usually pay a lot of attention to the ads or say they will this year, as well as those who cite the ads as the only reason they plan to watch the game this year — are significantly more likely to enjoy any ad type, and are notably more favorable towards top messages, even those which would yield net negative enjoyment among the general public. In fact, at least one quarter indicated that they would enjoy the bottom-most ranking ad types according to the overall population. 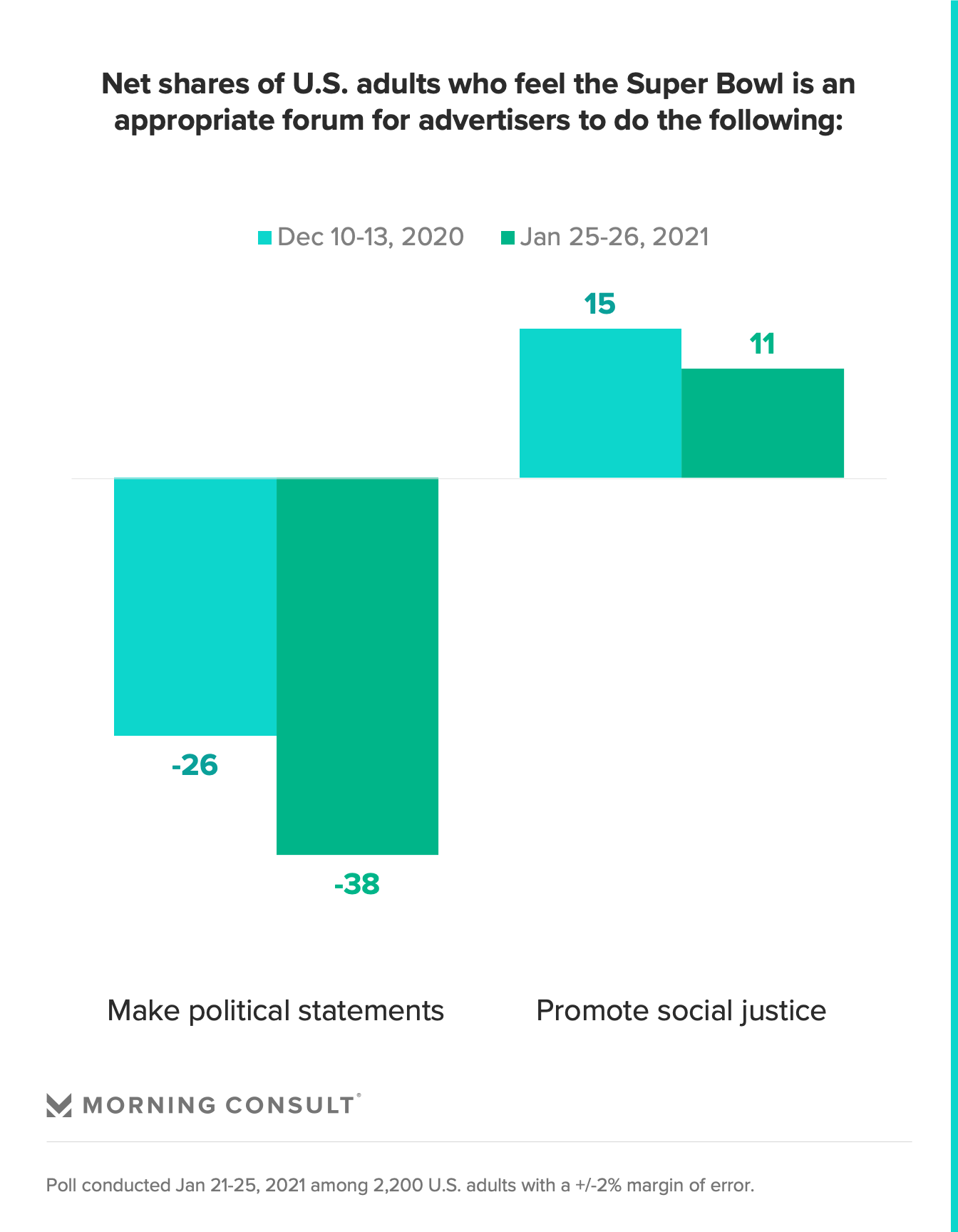 In the wake of a tumultuous presidential election, the nation as a whole is tired of political campaign advertising, as well as ads related to politics in any form. Each of these ad types would be enjoyed by two in ten Americans, with the balance indicating they would not enjoy these ad styles.

Underscoring this point, a clear majority, 61 percent, prefer that companies don’t make statements on political and cultural issues during otherwise entertaining events like the Super Bowl. To that end, the net share of U.S. adults feeling that the Super Bowl is an appropriate forum for advertisers to either make political statements or promote social justice in their commercials has declined since mid-December.

However, ongoing and multidimensional tensions across America — especially along the socioeconomic lines exacerbated by opposite realities since March’s COVID-19 outbreak — are clearly translating to different Super Bowl LV viewers having nuanced preferences (and sensitivities) around the types of ads they’d like to see during the big game.

Democrats, Americans with higher educations and high incomes, and also those living in the northeast are much more likely to enjoy a number of top ad types, funny, informative, and social justice-promoting ads or COVID-related ads in particular, while distinctly different ad types would particularly appeal to Republicans and minorities. 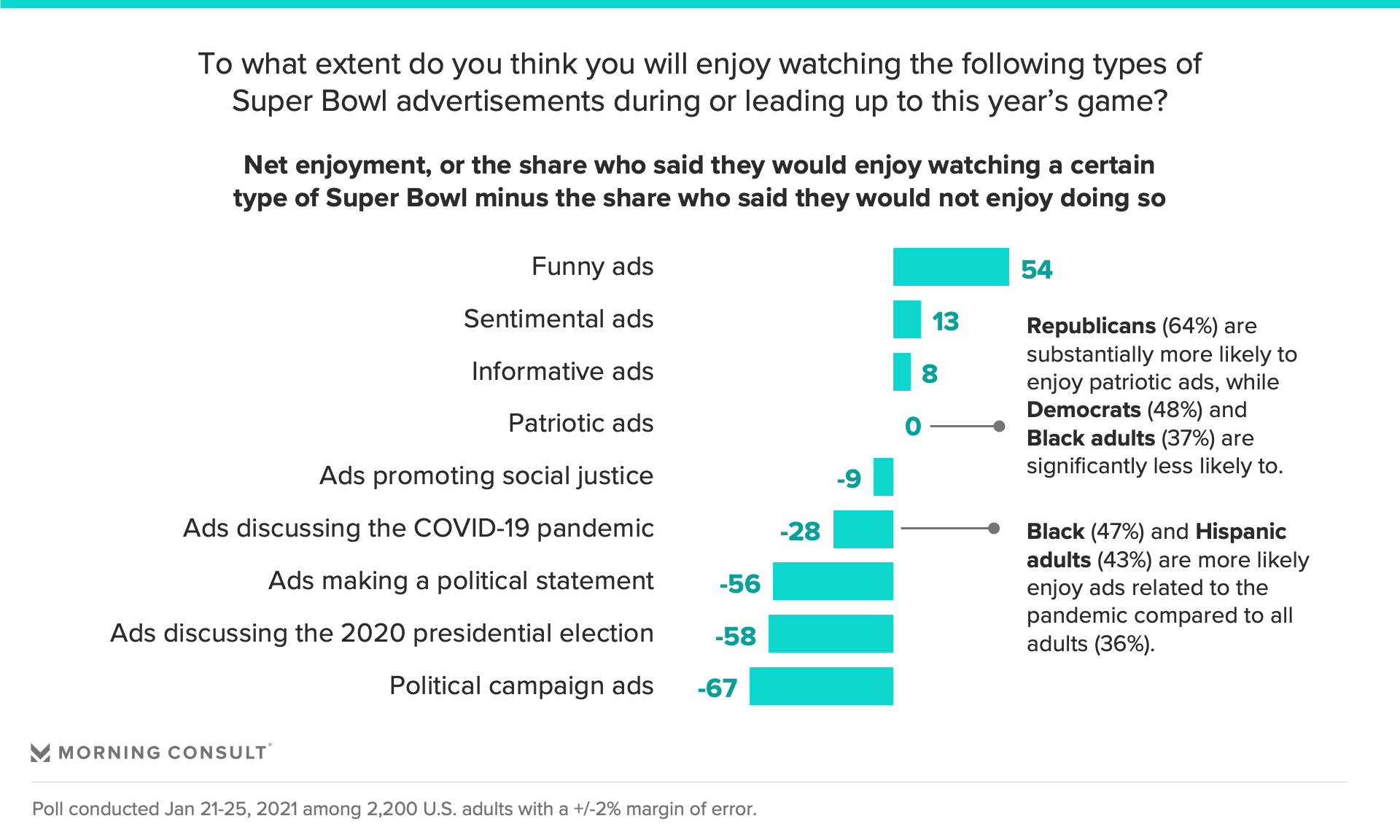 Not only will different audiences enjoy different tones in advertising, but similar divergences will also exist around the favorability of specific Super Bowl ad content. While Gen Zers are significantly more likely to feel more favorably towards companies activating around various social issues — civil rights, reforming criminal justice, and Black Lives Matter, among others — those only watching Super Bowl LV for the ads are much more interested in the entertainment value than more substantive themes. 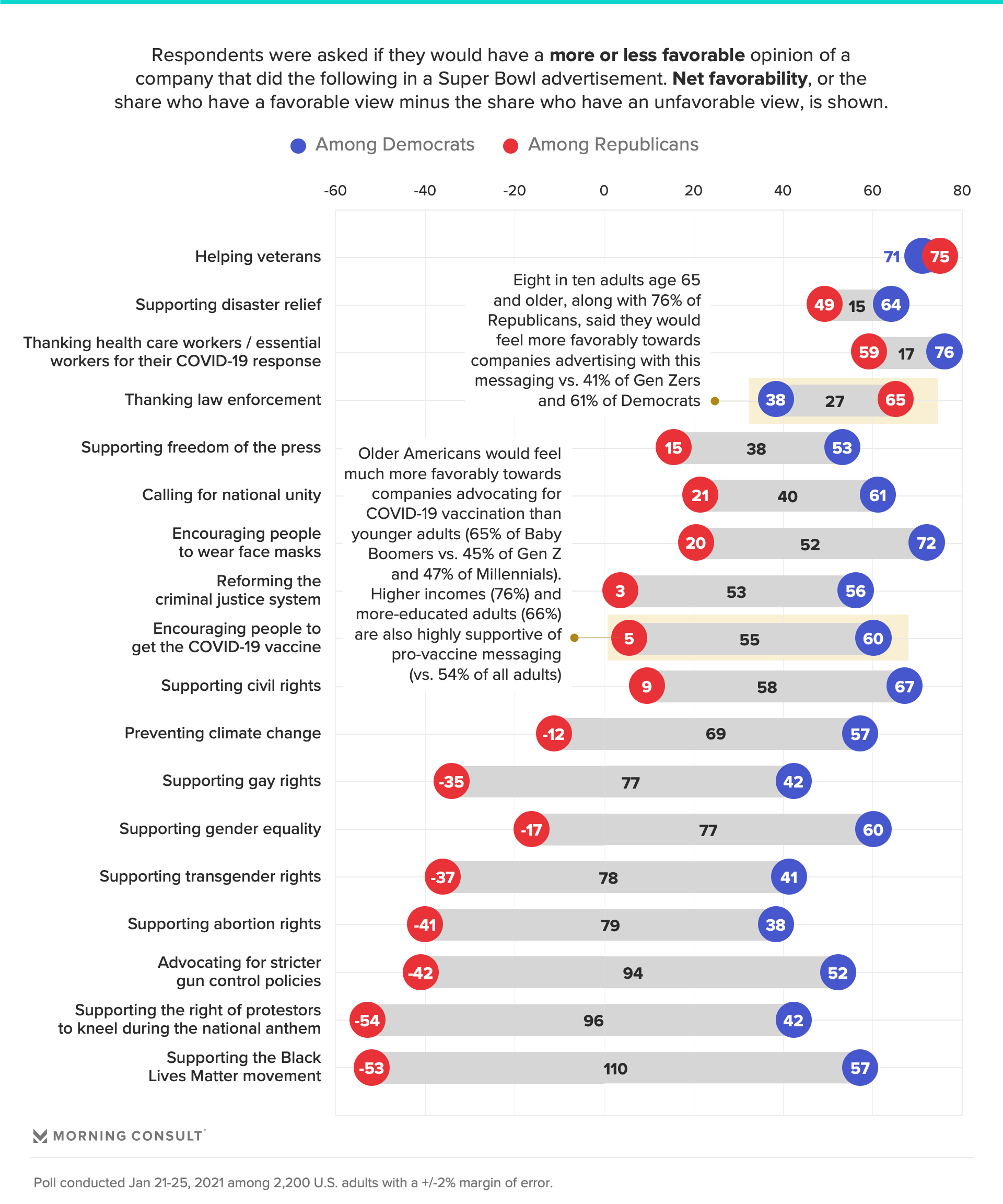 The Game of Games

2020’s challenges touched every corner of our lives, and football’s biggest game was no exception.

From contingency planning around COVID-19 exposures and facing new competition for viewers’ attention to historic shifts stances around critically important social issues, the NFL experienced a season like no other. Now, on February 7th, that season comes to a close, as two teams who’ve never played each other in a Super Bowl face off in Tampa Bay.

Knowing your audience is the first rule of any good messaging, let alone advertising — especially when scaled to the near-100 million viewers who typically tune into the Super Bowl. This year, despite endless complexity in the world around us, undeniable nuances in preferences, sentiments, and expectations across Super Bowl LV viewers, and different reasons for tuning it, it seems that the one thing we can all agree on is our love of the laughs and levity of Super Bowl advertising.