Where Different Brands, Categories Will Find Super Bowl Audiences With the Strongest Affinity 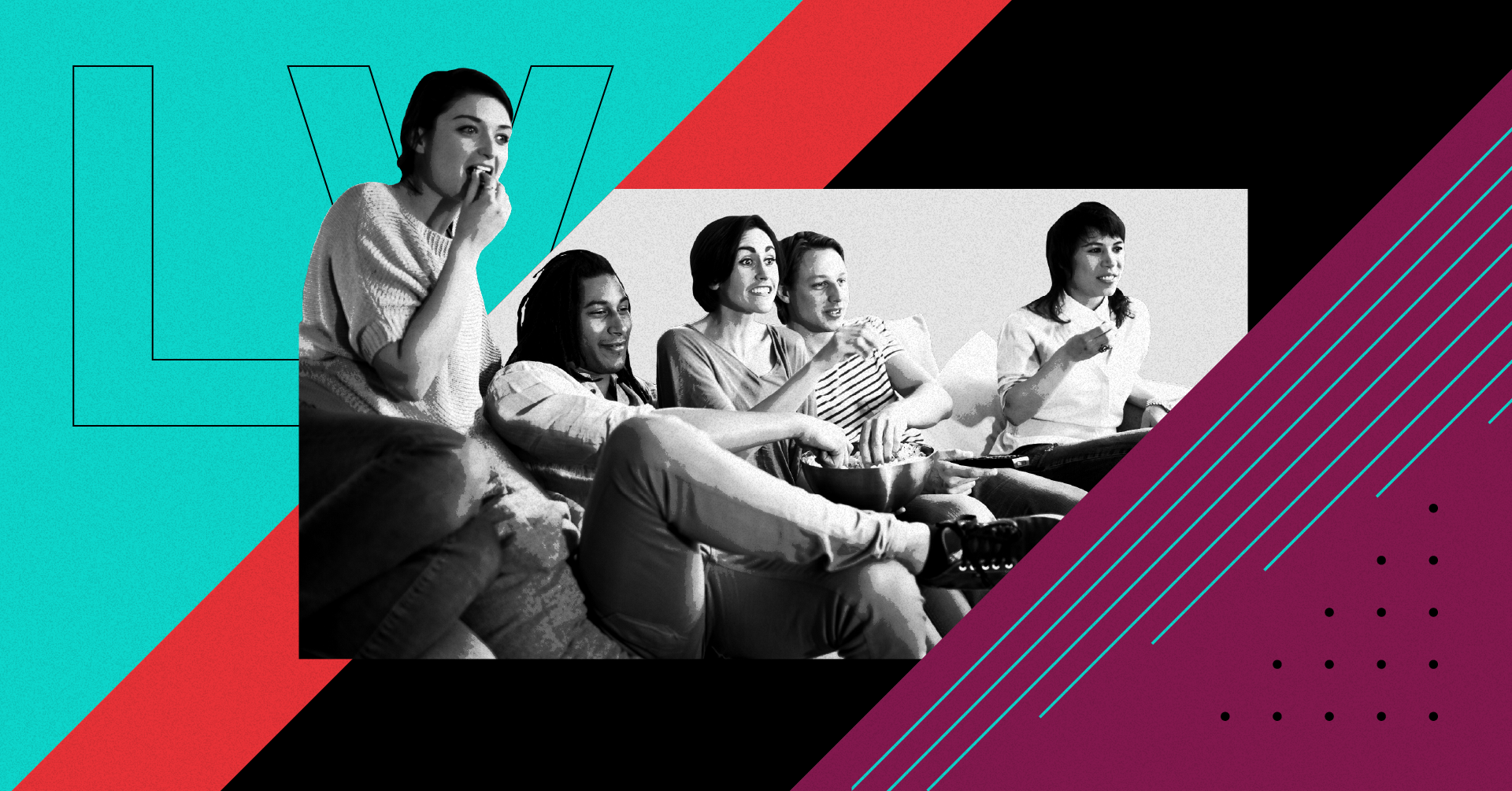 Roughly six in ten Americans plan to watch Super Bowl LV this Sunday but, as tends to be the case each year, the primary reason for tuning in varies. Differing perceptions of the brands spending millions to advertise for mere seconds in this year’s game — coupled with varying interest in ad types across these viewing groups — could complicate the winning play for advertisers striving, indeed needing, to strike the right tone in tumultuous times.

Using Morning Consult Brand Intelligence, we explored the Super Bowl audiences that brands are most likely to find success with, whether they’re watching for the game, the halftime show or the commercials.

Who’s watching, and why

Eighty-four percent of Americans cite the football matchup between the Kansas City Chiefs and the Tampa Bay Buccaneers as a reason for their expected viewership of Super Bowl LV — but an equally significant 76 percent of expected Super Bowl LV viewers say ads are a reason they’ll be watching. Though a plurality (38 percent) say ads are a minor reason, 30 percent cite ads as a major reason for watching the game this year, and 8 percent say commercials are the only reason they’re tuning in.

As might be expected, clear differences in the audience composition of each of these cornerstone features exist.

Show me the ads

Yet, similar to years past, recent Morning Consult research shows that even those watching primarily for the game will be keeping an eye on the ads. An unsurprising 87 percent of ads-first Super Bowl LV viewers expect to pay some or a lot of attention to ads on Sunday, dropping only to 83 percent of halftime-first viewers and 79 percent of game-first viewers saying the same.

This is good news for advertisers able to reach increasingly larger audiences with such premium advertising real estate.

However, the Super Bowl’s different audiences, defined by the primary reason respondents are tuning in, mean there’s a wide spectrum of affinity for the key categories and the brands advertising during the biggest game of the year. 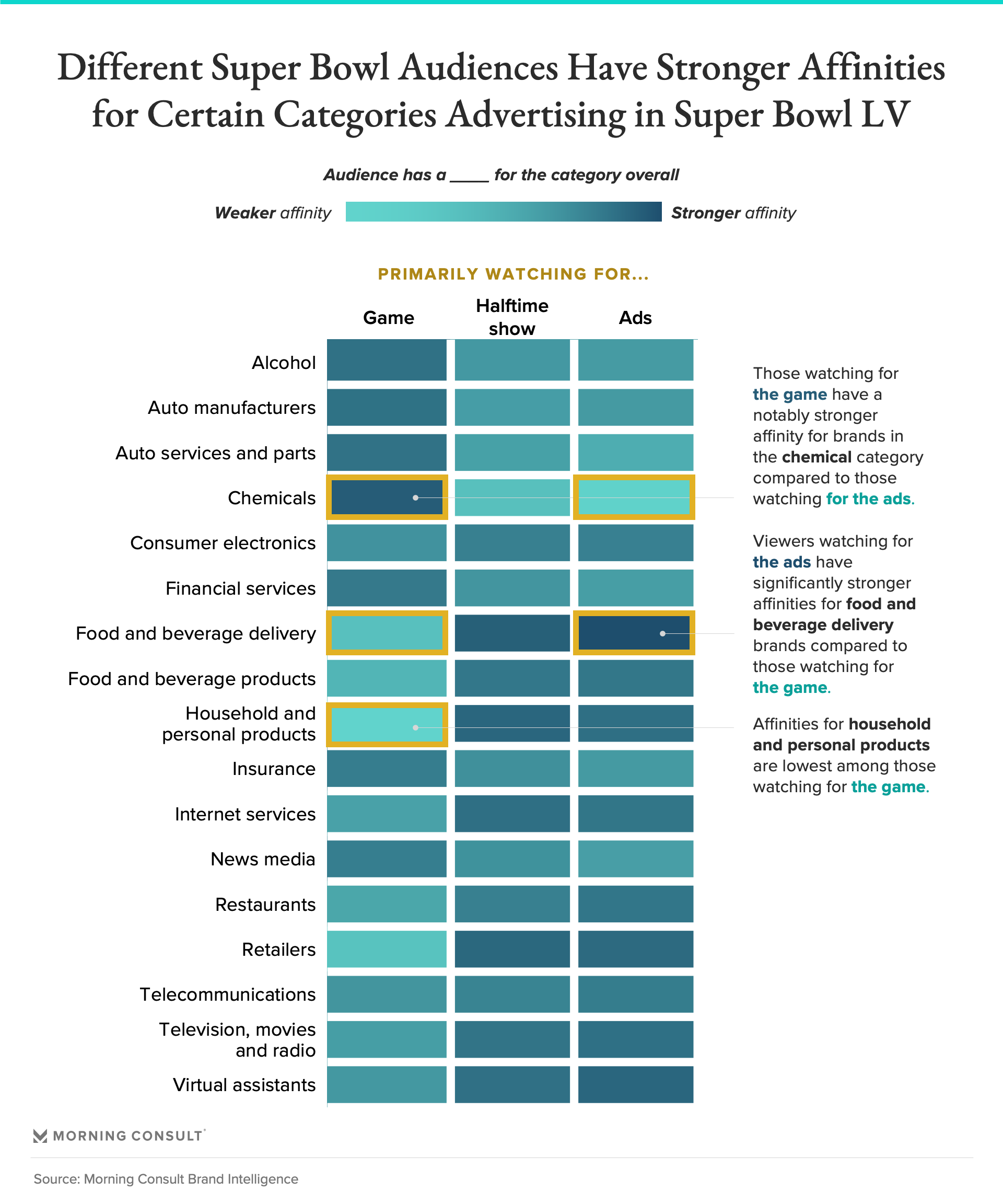 As might be expected given the demographic makeup of these three viewing groups — those watching for the game, the halftime show or the ads — categories such as retailers and household and personal products resonate least among the game-first audience, while the home care and chemical as well as auto categories do so among halftime show- and ad-first Super Bowl LV viewers.

Though tending to be more neutral in nature, affinities for the telecommunications and consumer electronics categories are closer to comparable across game- versus entertainment-first audiences, but clear divides in which categories these two clusters of Super Bowl viewers have an affinity for are otherwise quite apparent.

Comparing an individual audience’s affinity for a given advertising brand to their affinity for the category that brand belongs to reveals high-potential pockets for some brands, and uphill battles for others. 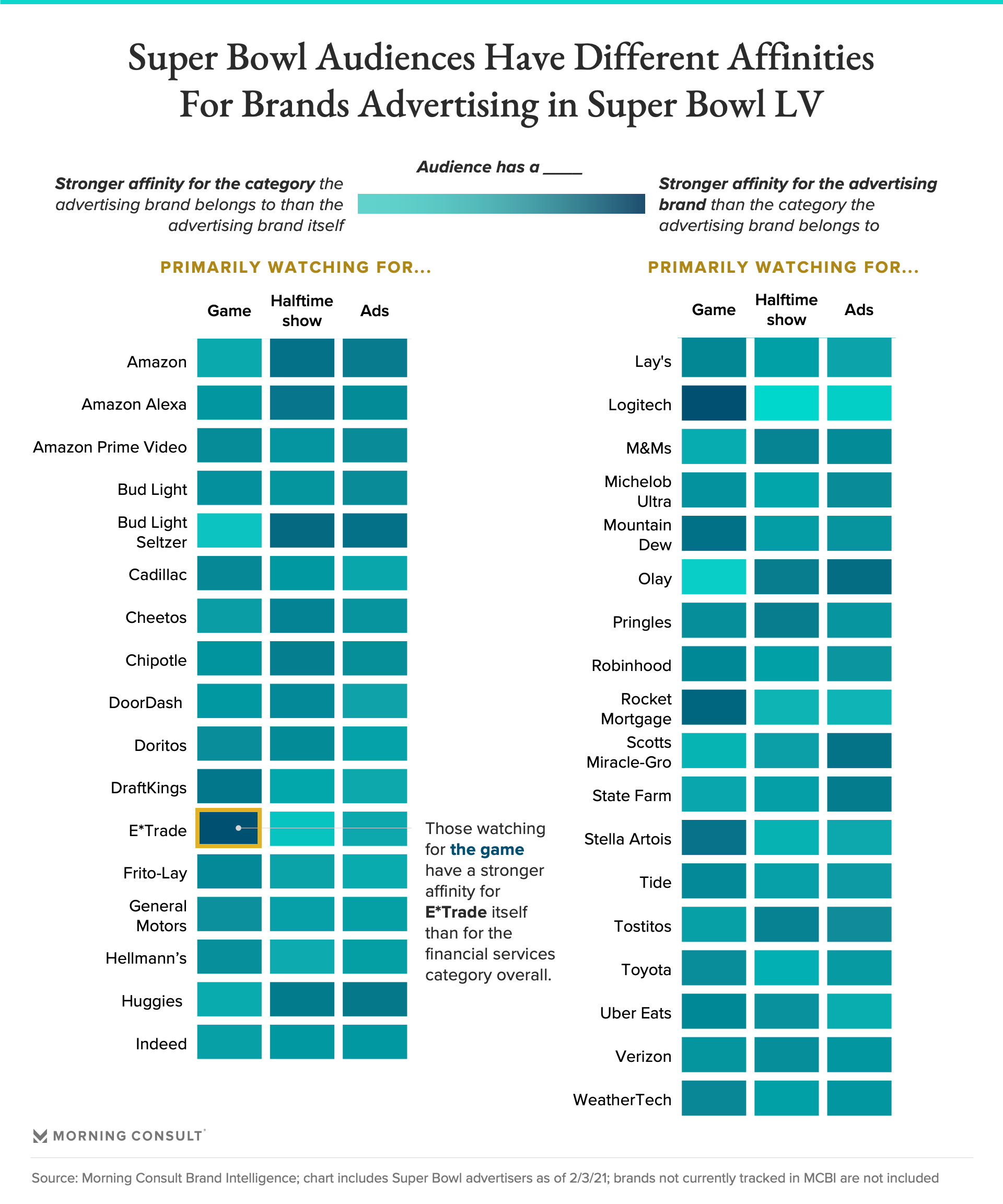 In other words, Super Bowl ads create an opportunity for certain brands to help close gaps among target audiences — as would be the case where a given audience feels more favorably towards the advertising brand’s category than toward the brand itself — or to double down on strong leads. This latter play would be the case when an audience’s affinity for an advertising brand exceeds their affinity for the brand’s category more broadly, as in the case of E-trade or Rocket Mortgage among game-first watchers, or Olay and Huggies among ads-first viewers.

How, then, can the advertisers doling out multiple millions for mere seconds of airtime hope to win across a viewership defined by different motivations for tuning in, different demographic compositions, and different attitudes towards both the tones ads convey as well as the categories which the advertising brand belongs to?

In answering this, it’s important to note that many of the already-released Super Bowl ads pursued levity, whether through humor, inspiration, or other generally entertaining tropes.

Given the wide appeal of this tone, not to mention the much-needed reprieve from reality, complexity, and somber messaging Americans universally desire, this was a wise — if not safe — choice by marketers.

What each Super Bowl spot aims to accomplish in its reach and resonance is of course subject to the advertiser’s respective business and brand objectives. Even still, whether by pursuing laughs or embracing a different theme in their Super Bowl advertising, 2021 continues to make messaging to the masses a highly nuanced and strategic game.