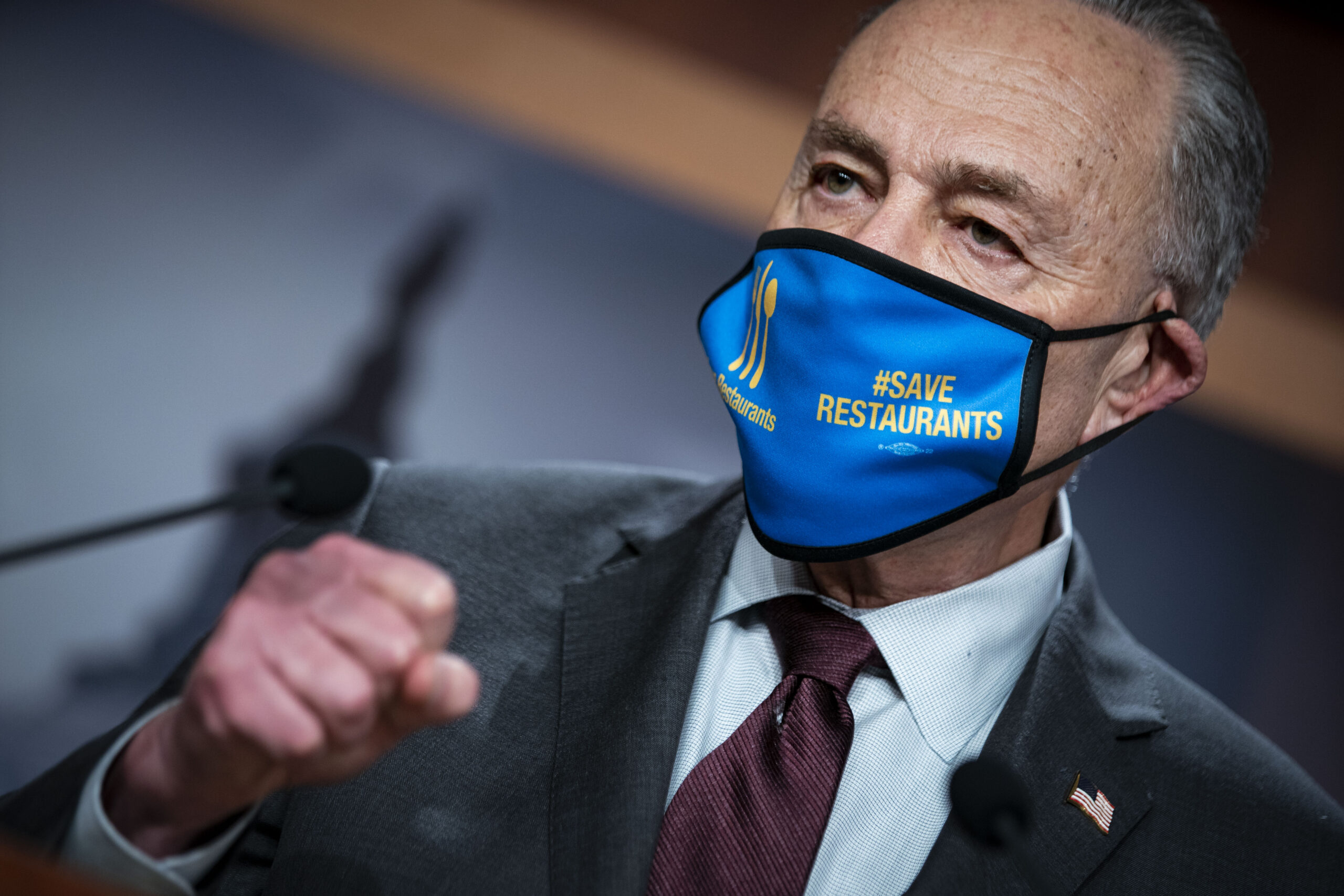 As the Senate prepares to advance President Joe Biden’s $1.9 trillion COVID-19 relief bill, new Morning Consult/Politico polling shows strong bipartisan support for the measure is holding against an uptick in Republican attacks on its size, scope and price tag.

In the new survey, conducted Feb. 26 to March 1, 77 percent of all voters and 59 percent of Republicans said they supported the measure which provides direct payments to some Americans, extends enhanced unemployment benefits through July and provides funding for state and local governments as well as K-12 schools and universities.

That level of backing from the public is consistent with findings from a survey conducted ahead of the House’s Feb. 27 successful vote on the bill, which passed without any GOP support.

The latest survey also sought to test whether a more partisan framing to Biden’s plan would materially impact the level of support: Half of voters were shown question wording that did not mention that the plan was Democratic in nature, while half were informed that it was the Democrats’ proposal.

The distinction mattered little. When provided the partisan framing along with the details of the proposal, 71 percent of voters — including 53 percent of Republicans — still supported it.

The split-sample responses carry a margin of error of 3 percentage points, while the broader poll of 1,992 registered voters has a 2-point margin of error. 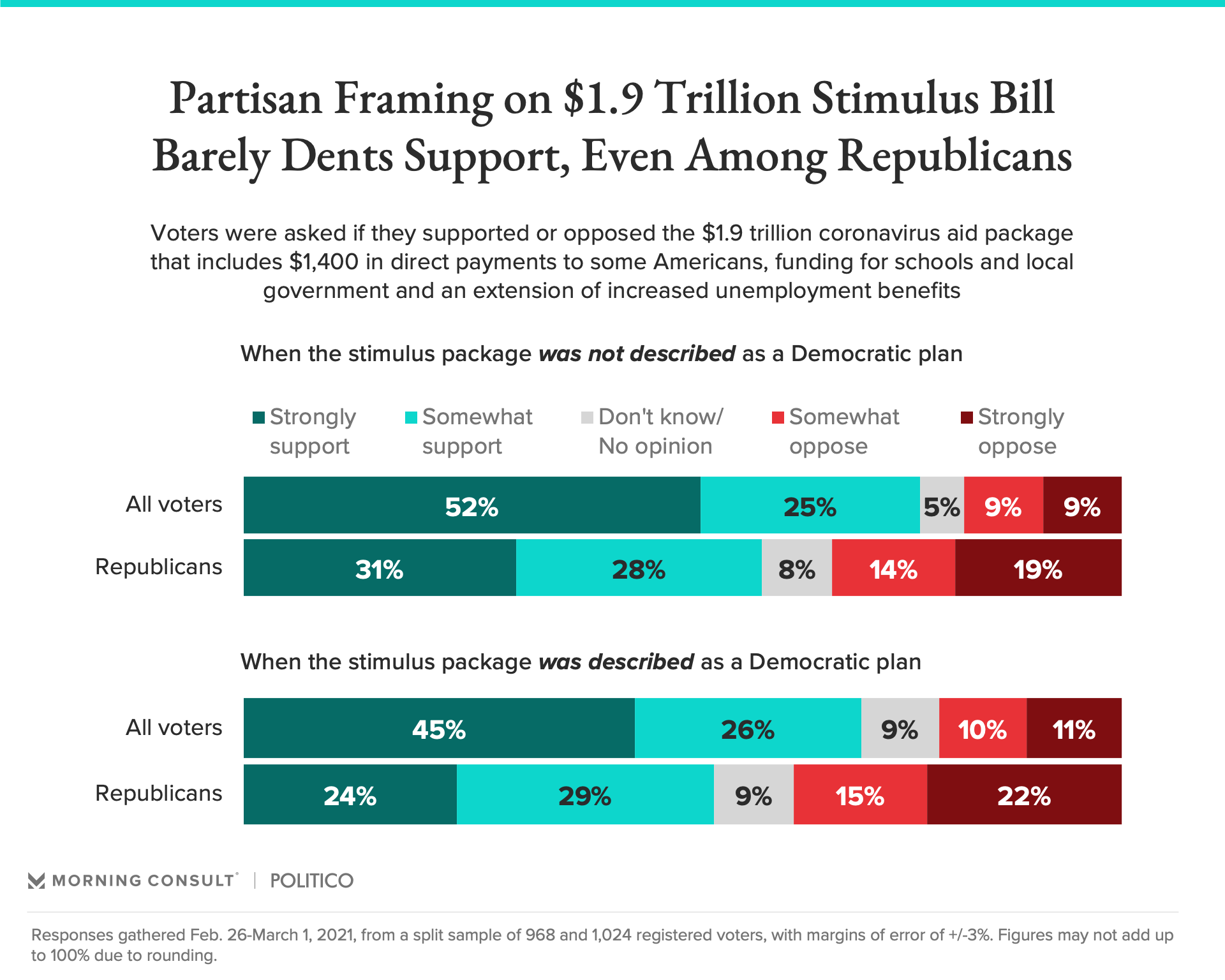 Neither form of the question posed to survey respondents mentioned the $15 minimum wage proposal pushed by progressive Democrats that was left in the House package but is set to be excluded from the Senate bill after the chamber’s parliamentarian said it did not pass muster with procedural rules mandated by the budget reconciliation process, which allows some legislation to bypass a Senate filibuster.

If lawmakers do take up the minimum wage issue down the road — assuming a last-ditch effort from progressives to overrule the parliamentarian doesn’t gain steam — they’ll do so with strong public backing. Most voters said they supported raising the federal minimum wage in some fashion, though there was some difference in opinion about how high it should go.

Forty percent preferred taking it all the way up to $15 an hour, while another 29 percent opted for an increase to $11 an hour, which moderate Democratic Sen. Joe Manchin of West Virginia voiced support for last week. Roughly 1 in 5 voters said Congress should not raise the minimum wage at all. 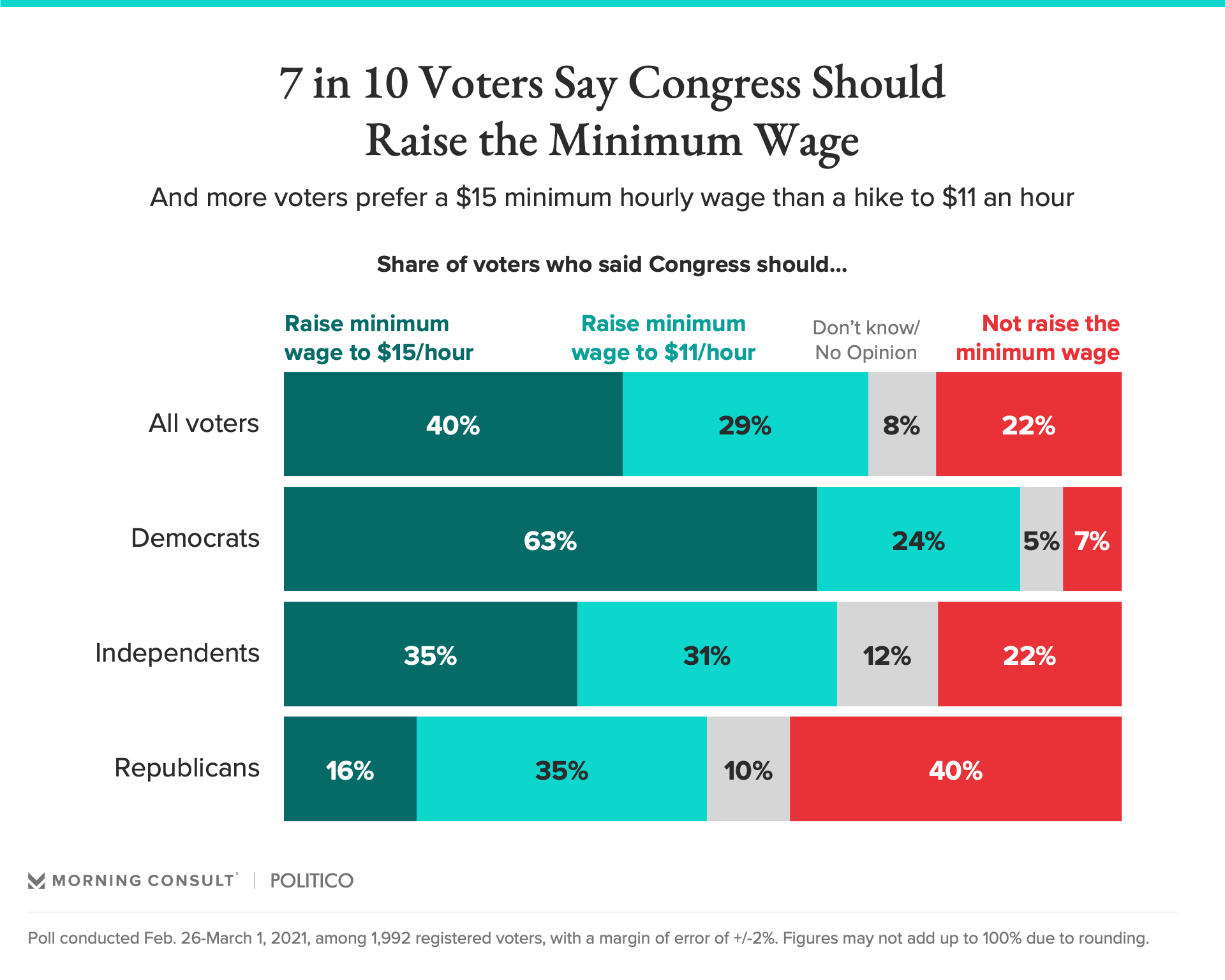 Democrats were most likely to support the $15 option at 63 percent, while another 24 percent backed the $11 wage.

About half of Republican voters favored some kind of increase to the minimum wage: 16 percent supported a $15 wage, and another 35 percent preferred an $11 hourly minimum. However, 40 percent of GOP voters said Congress should not raise the minimum wage at all.

After the parliamentarian ruled against the minimum wage’s inclusion in the broader stimulus package, Sens. Bernie Sanders (I-Vt.) and Ron Wyden (D-Ore.) floated a “plan B” approach that would impose tax penalties on large companies that didn’t pay their workers at least $15 per hour.

The plan was said to be scrapped over concerns that corporations could change full-time employees’ classification to contractors as a means to skirt penalties. Still, the proposal was supported by 54 percent of voters in the poll, including 78 percent of Democrats and 28 percent of Republicans.