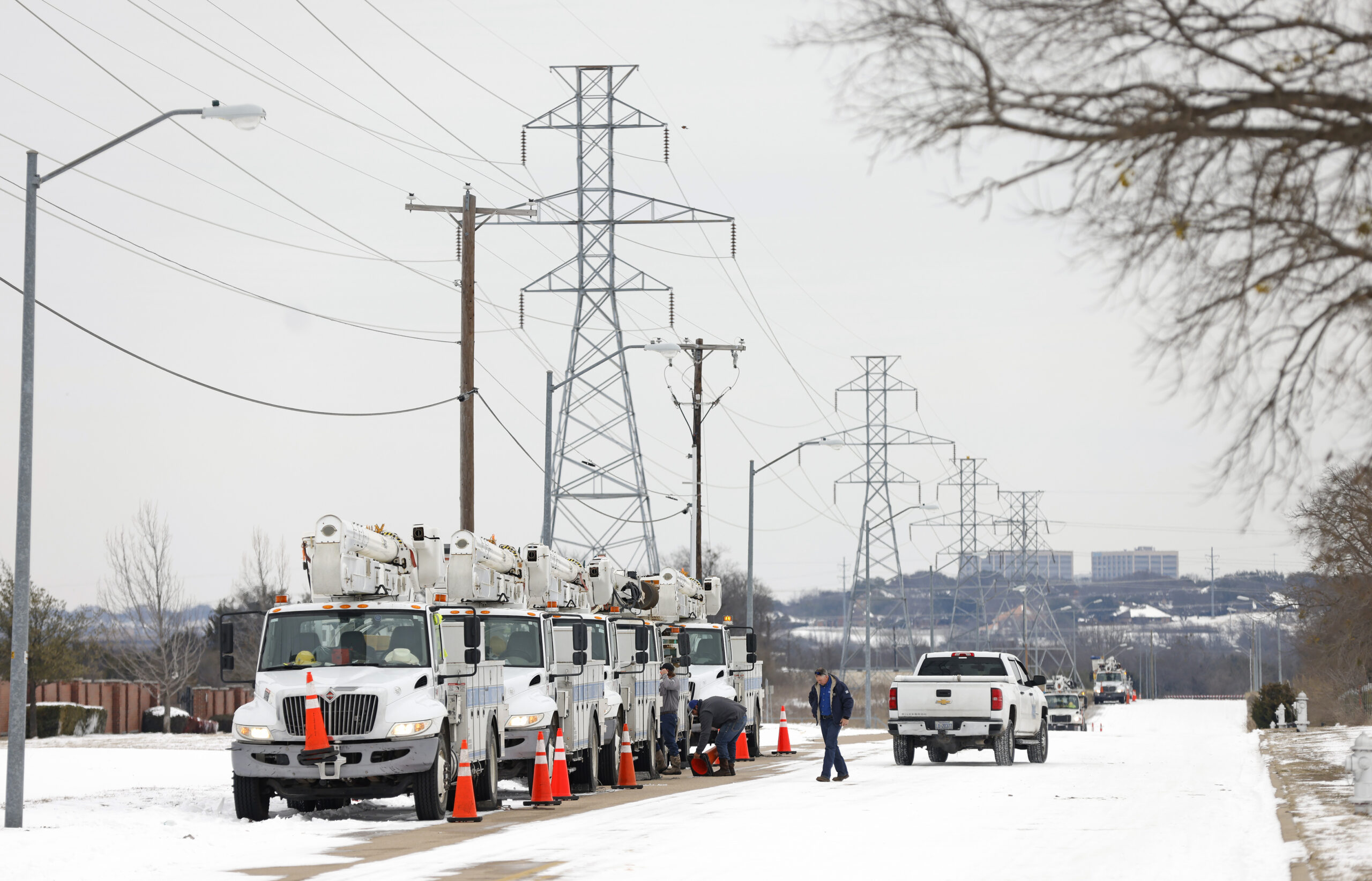 Pike Electric service trucks line up after a snow storm on Feb. 16, 2021, in Fort Worth, Texas. In a March 5-8 poll asking U.S. adults how much climate change contributed to recent natural disasters “such as last month's winter storms throughout Texas and elsewhere in the middle of the” country, a smaller share said climate change contributed “a lot” than they did in a September poll that ran during a record-breaking wildfire season: 31 percent versus 39 percent, respectively. (Ron Jenkins/Getty Images)
By Lisa Martine Jenkins

Despite their rarity and severity, the recent winter storms that led to widespread power outages in Texas and elsewhere in the country do not seem to have translated into an increase in the public’s association of recent disasters with climate change. Rather, the share of adults making the connection seems to have nudged down slightly in the last six months, according to a comparison of two Morning Consult polls.

In a March 5-8 poll asking U.S. adults how much climate change contributed to recent natural disasters “such as last month’s winter storms throughout Texas and elsewhere in the middle of the” country, a smaller share said climate change contributed “a lot” than they did in a September poll that ran during a record-breaking wildfire season: 31 percent versus 39 percent, respectively.

However, the majority reported at least some link in both cases; just 14 percent of March respondents said there was no connection at all.

The recent poll mirrored the structure of a Sept. 14-16 question that gave respondents the example of “wildfires in the West” in the midst of last year’s particularly brutal fire and hurricane season. During that period, 73 percent of adults said climate change contributed “a lot” or “some,” and 12 percent it didn’t contribute at all. 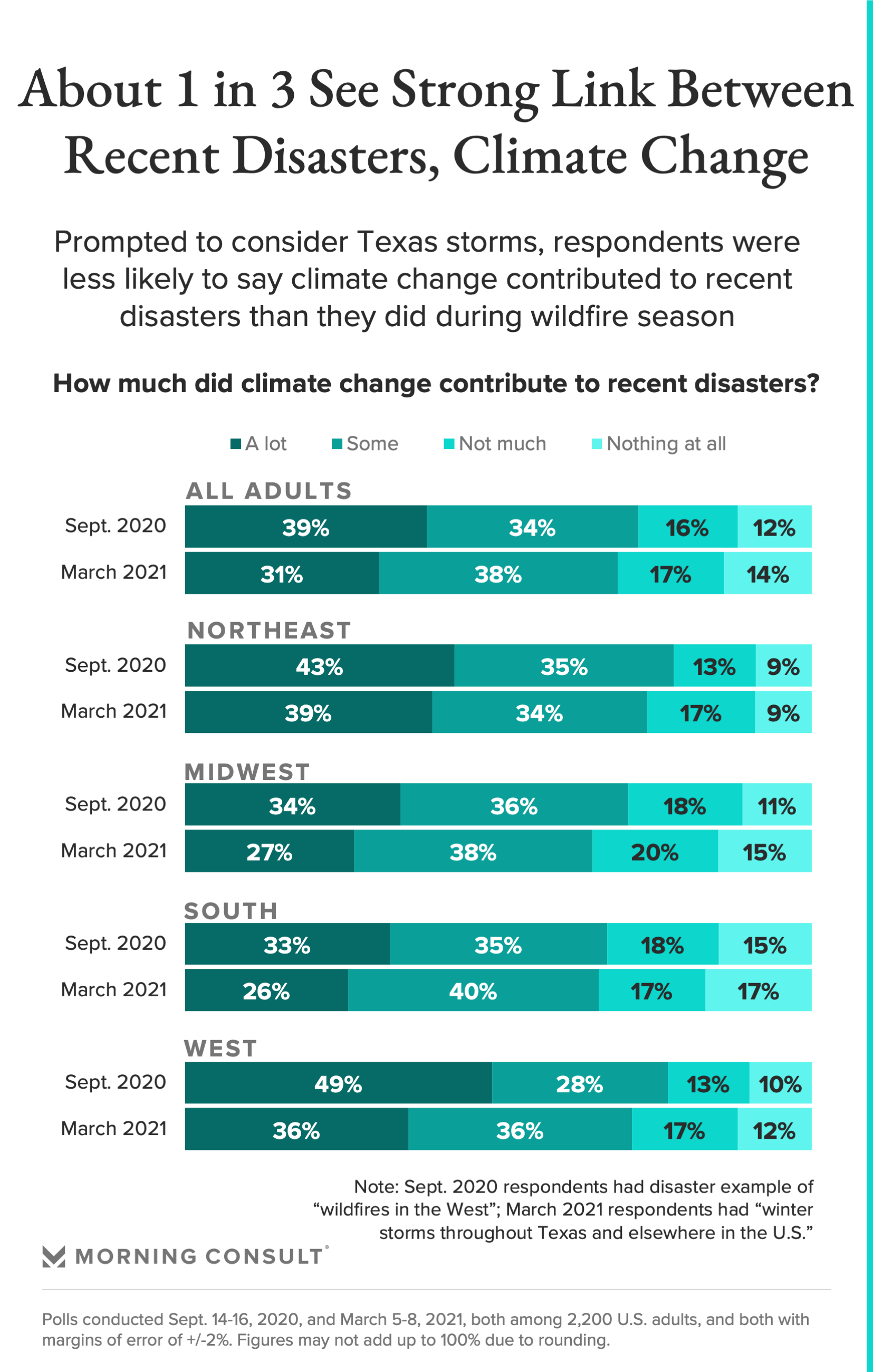 While it is not necessarily possible to determine to what extent climate change impacted any given storm or disaster, scientists broadly concur that the phenomenon has led to an increase in the power and frequency of extreme weather. As recent years have indicated, when these storms meet electricity grids or other infrastructure that are not prepared, the crises can spiral.

While those from all regions are less likely to say climate change has contributed a lot to recent disasters now than they were six months ago, the share of those in the West who said as much saw a particularly dramatic drop: from 49 percent in September (when many were witnessing disasters unfold in their own backyards) to 36 percent in the new poll, a decline of 13 percentage points. For those in the South, where the February storms had a significant impact, the gap was 7 points.

The concern that respondents expressed about the impact of natural disasters on their own communities also dropped over the past six months: While 41 percent said they were “very concerned” in September, 36 percent said the same this month.

Meanwhile, the share who say that climate change is making natural disasters more frequent and more powerful has also fallen, though only slightly: to 58 percent in March from 63 percent in September for frequency and to 59 percent from 62 percent for power. Both polls surveyed 2,200 U.S. adults and have 2-point margins of error. 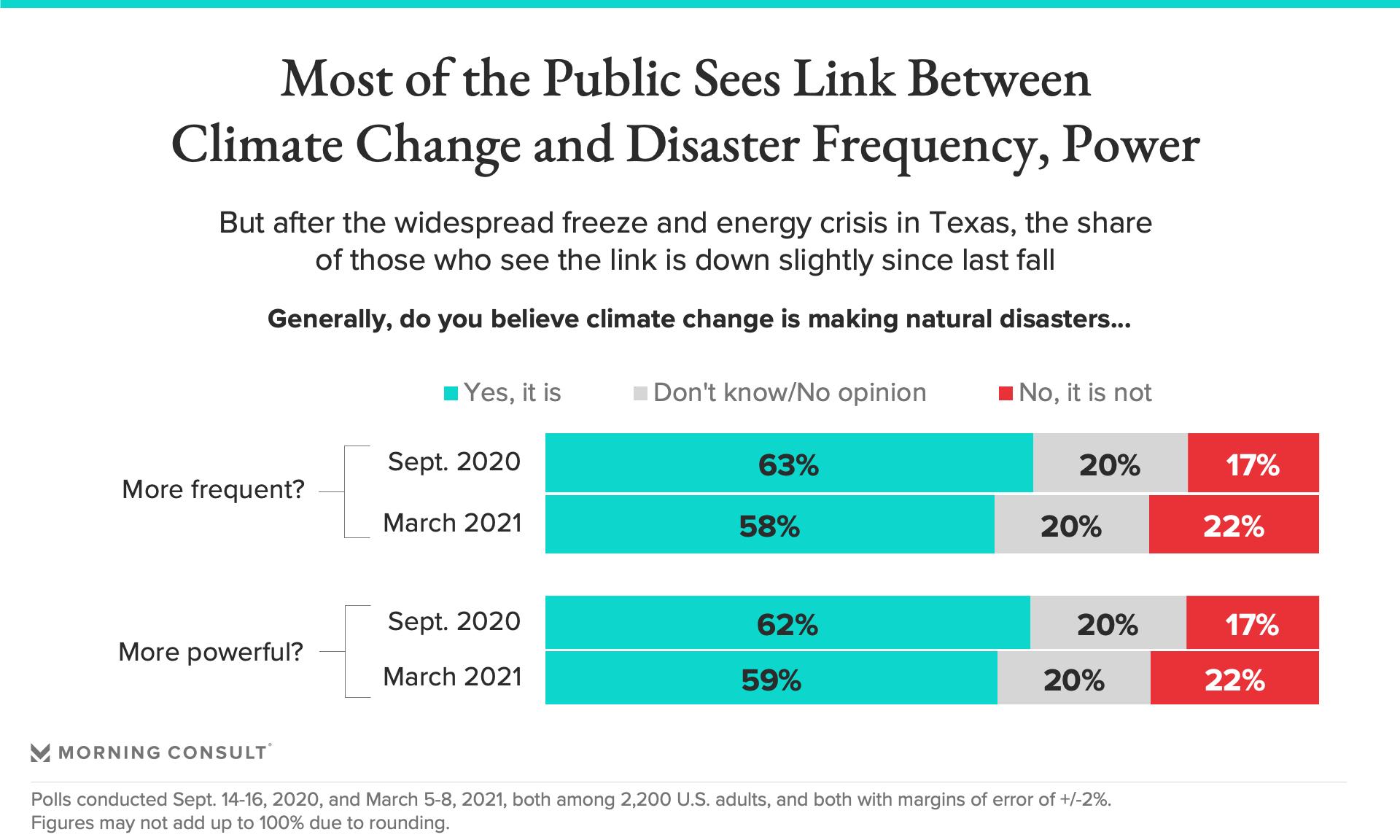 Looking forward over the next half-decade, nearly half the public thinks they will continue to get more severe, and 35 percent say they will be about the same, perhaps reflecting a faith that humanity will succeed in slowing or at least mitigating the progress of the climate crisis. Again, just 4 percent say they expect storms will get less severe.

Related: In the Shadow of Texas Outages, Disaster Preparation at Home Is on the Radars of 2 in 5 Adults
Climate Change Natural Disasters