In Nascent Fight for the House, Both Parties Are Hoping Their Trump-Era Gains Hold

Republicans eye advancements with the working class, while Democrats are hoping to hold ground in America’s suburbs 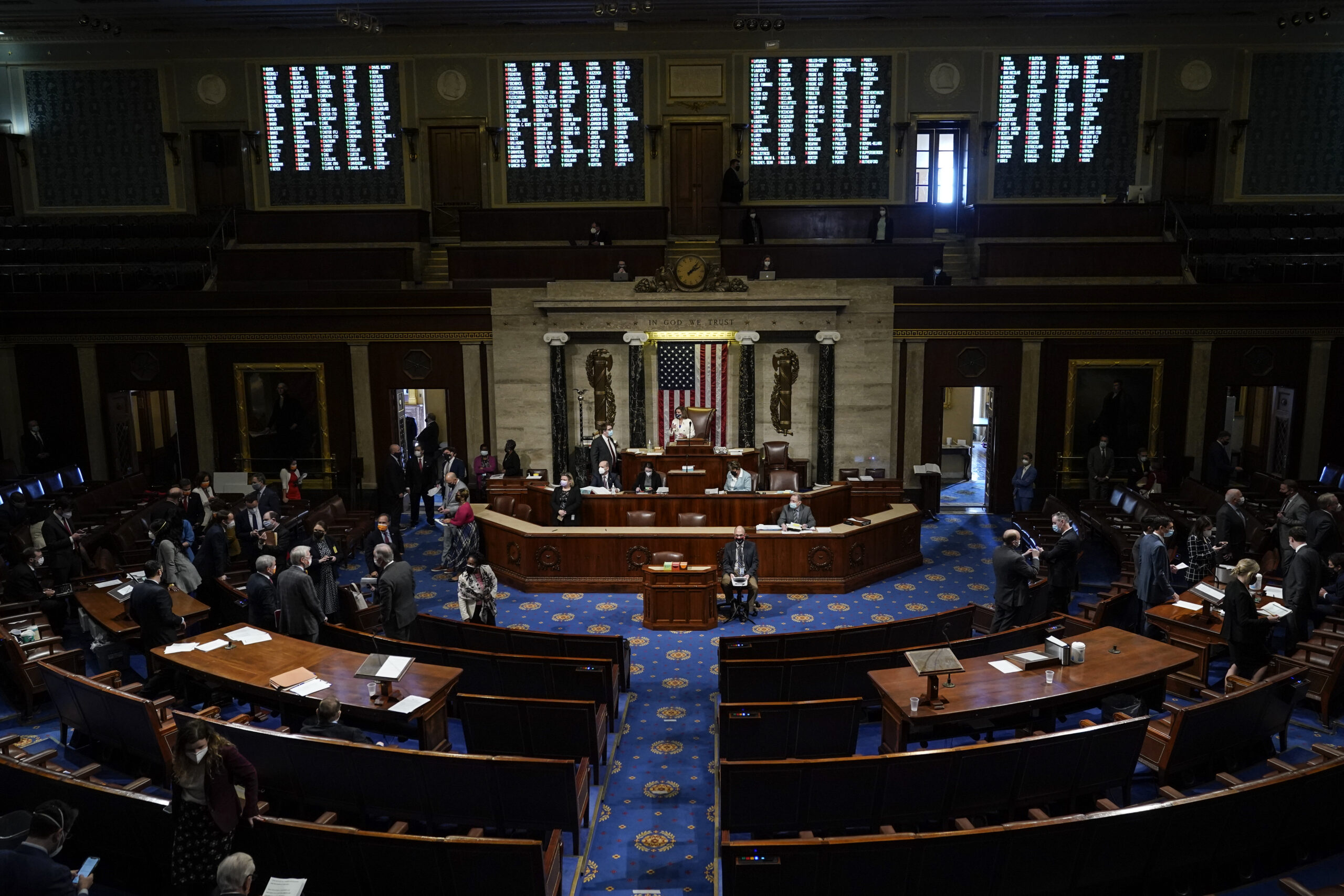 Speaker of the House Nancy Pelosi (D-Calif.) presides over the House chamber during a March 10 vote to pass President Joe Biden's $1.9 trillion coronavirus relief bill. As Democrats and Republicans in the House look toward the 2022 midterm elections, both sides are hoping to maintain support from their coalitions of voters that shifted during the course of the past two election cycles. (Drew Angerer/Getty Images)
By Eli Yokley

The two men leading their respective parties’ efforts for control of the House in 2022 almost sound like pollsters in their talk of demographics.

Minnesota Rep. Tom Emmer, chairman of the National Republican Congressional Committee, said in a recent interview with Morning Consult that he believes his side will win the midterms because the Democrats have “driven the working men and women out of their party,” a nod to the GOP’s recent gains with white and nonwhite working-class voters. His counterpart, Democratic Congressional Campaign Committee Chairman Sean Patrick Maloney of New York, has said the Republican Party ceded control of the college-educated demographic with the rise of conspiracy theorists within its ranks.

Their early expectations rely on the permanence of trends of partisan realignment that helped both Democrats and Republicans during Donald Trump’s tenure in the White House. In the face of a pending redistricting that is likely to upend the current understanding of which House districts are competitive, the question of whether the electorate will continue to consolidate along educational lines and depolarize racially without Trump on the ballot is likely to prove consequential as the two parties make their opening cases for control of the House in the 2022 midterm elections.

“It’s one of the biggest unknowns going forward,” said Nathan Gonzales, the editor and publisher of Inside Elections: Can Republicans maintain their gains with the working class and voters of color? And are the shifts toward Democrats among college-educated suburbanites permanent, or were they simply a reaction to Trump?

Related: How Trump Could Help — and Hinder — the GOP’s Midterm Efforts

Those questions were the subject of a widely circulated recent New York Magazine interview with David Shor, a Democratic data analyst who worked on Barack Obama’s 2012 campaign. He said there are signs of danger for the Democratic Party among white working-class voters who switched from Obama to Trump as well as the voters of color – especially Hispanics – whose votes contributed to unexpected losses in the House even as the party managed to take the White House and win narrow control of both chambers of Congress.

In an allusion to that threat, Guy Cecil, president of the Democratic super PAC Priorities USA, on Thursday told reporters the party saw “relatively small margins” of victory despite their overall wins, and urged Democrats to approach voters of color with the kind of nuanced persuasion efforts that are often reserved for white voters on top of the traditional mobilization efforts. Democrats benefited from growing their numbers in those communities, he said, but stagnation in other places was unsettling.

The issue is perhaps most salient with regard to Hispanic voters, a key constituency in states like Florida and Texas that are likely to form the front lines of the fight for a House majority next year.

Former DCCC Executive Director Dan Sena, who led the House Democrats’ campaign committee when they won the chamber in 2018, said the GOP’s recent gains with Hispanic voters (an imperfect catchall term for a diverse group of Americans) should be caveated by history: Republican President George W. Bush, for example, performed better with that group in his re-election campaign than he did the first time he ran. But Sena warned that 2020’s results are a cause for concern that should get the same kind of attention as the Democrats’ challenges with the white working class.

“This voting bloc shares an enormous amount in common with non-college educated white voters,” he said, noting the average Hispanic voter’s comparatively lower levels of educational attainment and a higher propensity to have served in the military or identify with organized religion, as well as solid levels of home ownership and an economically independent spirit.

The message is that we believe that every job is important in this country, and the working men and women that Washington and primarily Nancy Pelosi and her socialist agenda have forgotten – they want to vote Republican because we’re going to protect those jobs.

For the Republicans, those factors make at least some Hispanic voters – like white voters without college degrees – especially prime for messaging on cultural issues, law and order and more general critiques of Democrats’ leftward lurch that’s become the core of its larger pitch to America’s working class, depending on the district. Emmer, in an interview last week, pointed to law and order and jobs as particular issues where the GOP feels it’s on solid ground with Hispanic voters, before widening out the pitch to the larger working class.

“The message is that we believe that every job is important in this country, and the working men and women that Washington and primarily Nancy Pelosi and her socialist agenda have forgotten – they want to vote Republican because we’re going to protect those jobs,” Emmer said.

Republicans took a gamble on their economic strength when not a single one voted for President Joe Biden’s $1.9 trillion COVID-19 package, despite large bipartisan support among voters for most of its provisions. Emmer and congressional Republicans have argued that the package – the most prominent product of Biden’s early presidency – amounts to a liberal wish list, banking on public support shifting if more voters come to understand the package as something more than $1,400 direct payments.

The latest Morning Consult/Politico poll suggests voters are currently most aware of the stimulus checks, but other elements they haven’t heard of are also popular – though there is room for that to change as awareness grows. 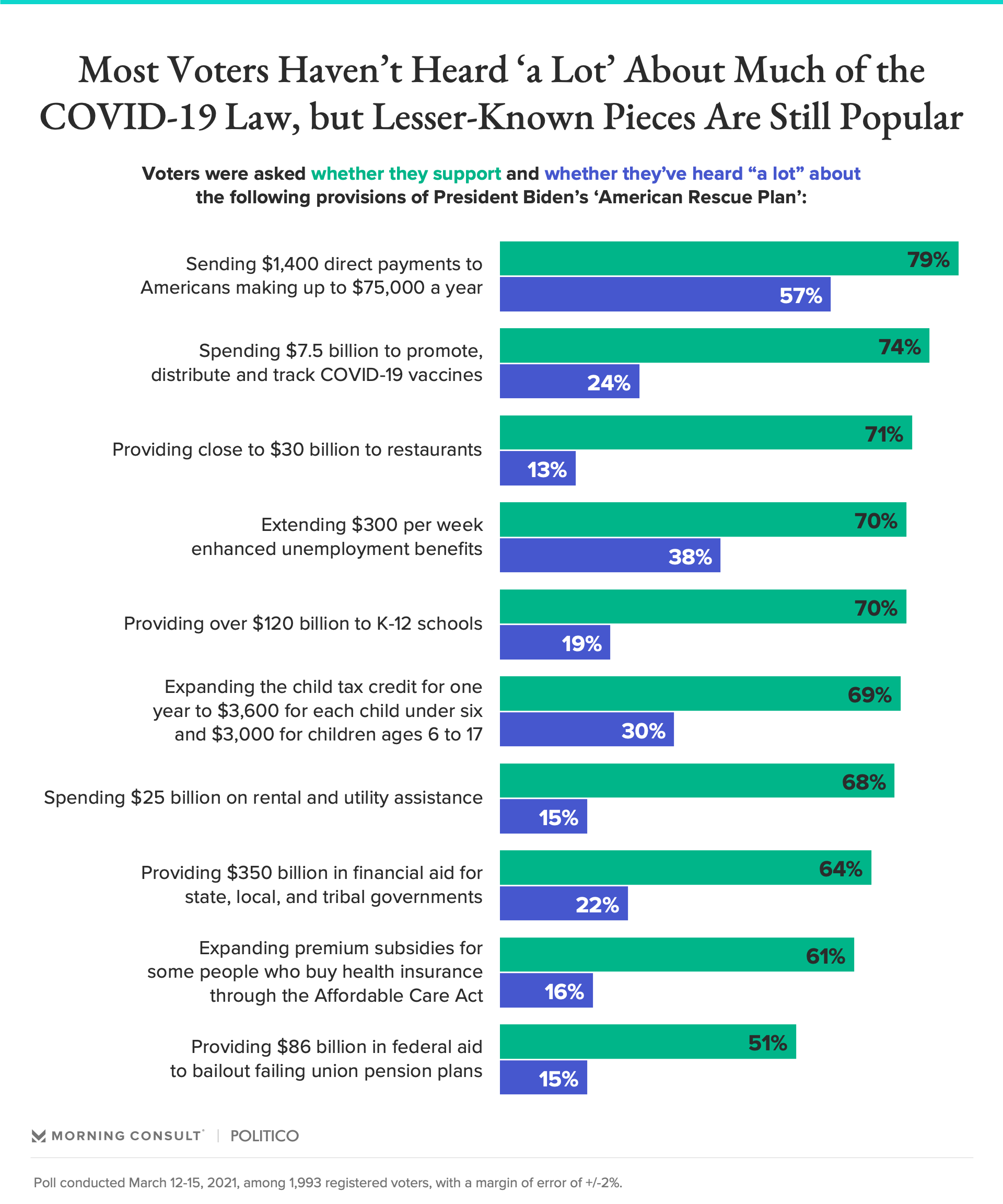 While midterm elections are historically a referendum on the incumbent president, Emmer in the interview invoked the House speaker’s name more than Biden’s in his attacks on the Democratic Party. It marked a departure from his comments to Morning Consult two years ago, when he said Republicans were “way too focused” on the California Democrat.

But given that Biden is a relatively popular figure in Washington, the early polling suggests that Pelosi – who some Democrats believe could forego seeking re-election next year – may be a better foil in the GOP’s efforts to cast House Democrats as ideologically out of step with the American people.

When registered voters nationwide were asked to place Washington’s top elected Democrats and Republicans on a 7-point ideological scale, with 1 meaning “very liberal,” 4 meaning “moderate” and 7 meaning “very conservative,” Pelosi ranked just to the right of Vice President Kamala Harris, who was considered the most liberal. Hispanic voters were less likely than white voters to perceive Pelosi as liberal, but along with Black voters, their views of her have shifted leftward over the past few months. 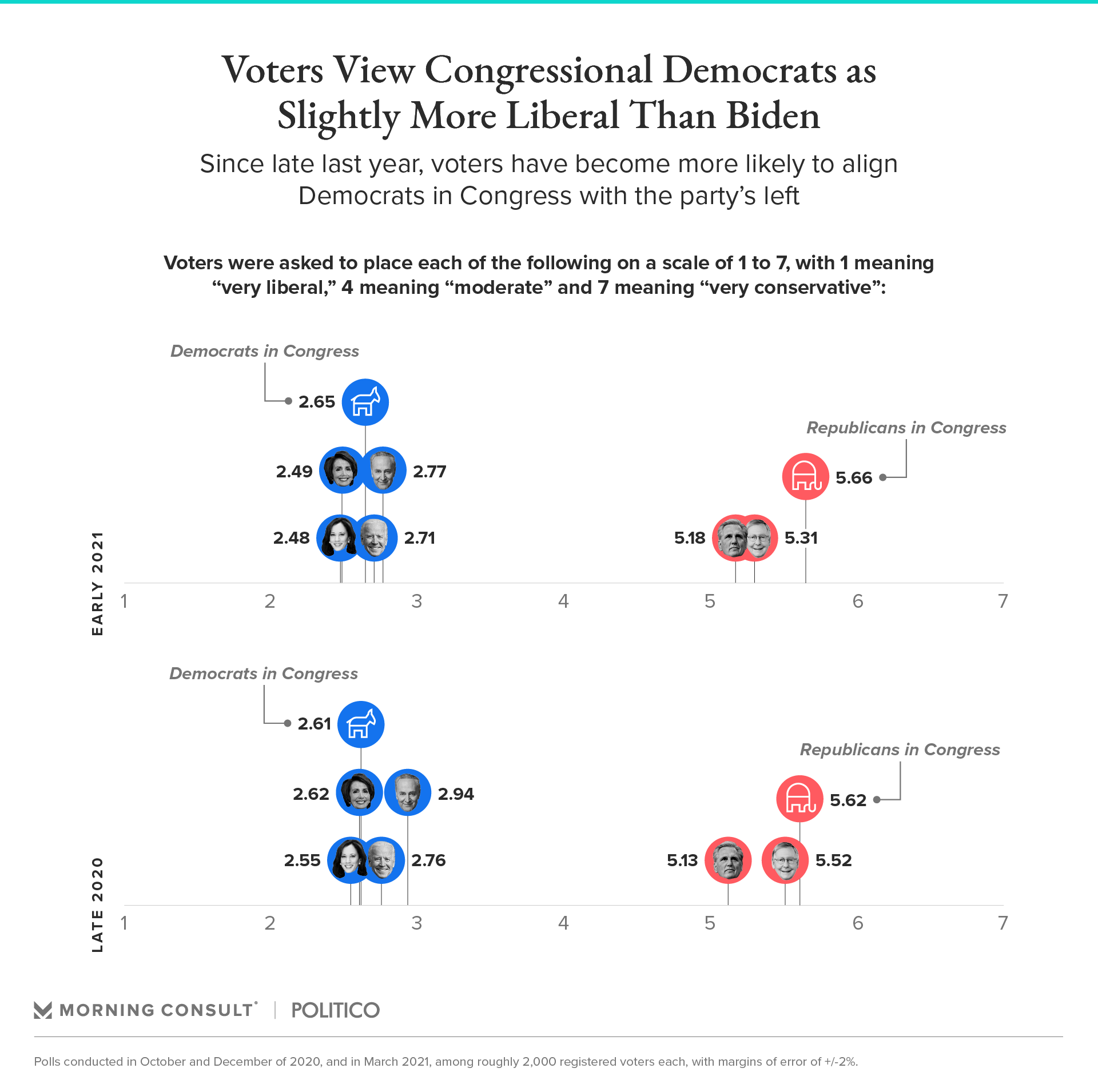 Still, the March 12-15 survey found that the average voter, as well as independents and suburbanites who are key to the current Democratic coalition, view Democrats in Congress as less ideologically extreme than their GOP counterparts, a view shared by white and nonwhite voters alike.

Matt Gorman, a Republican strategist and former NRCC official, said the GOP’s targeting of voters of color “won them a few districts,” but added that “we can’t get blown out in the suburbs.” He said candidates who can attract both – pointing to the victories of Republicans Young Kim and Michelle Steel – offer “a great template moving forward.”

Maloney and the Democrats are overseeing an initially popular agenda: On top of wide support for the COVID-19 relief package, Morning Consult/Politico polling also suggests the bulk of voters are on board with the idea that America needs improvements to its ailing infrastructure, the subject of Biden’s next major legislative push. Majority or plurality support also exists among the voting populace for many of his proposed changes to the immigration system, such as the establishment of a pathway to citizenship for undocumented immigrants currently in the United States, though polling has shown Biden’s executive orders on asylum and refugees have proven more divisive.

While we’re delivering a historic rescue plan in scope and in scale, they’re talking about children’s books and Mr. Potato Head, and imagining terrorists at the border.

With national public opinion generally on their side, Democrats are arguing that it’s their Republican rivals who are outside of the mainstream — an effort to solidify the voter disenchantment with the GOP that advanced their cause, especially across the suburbs, over the past two election cycles.

“I think there’s a mound of evidence that the Trump brand, and worse, the post-Trump QAnon brand that the Republican Party has embraced, will not work in competitive districts,” Maloney said during a Tuesday interview, attacking the growing conspiratorial elements of the GOP’s coalition that some educated voters consider unseemly.

“While we’re delivering a historic rescue plan in scope and in scale,” he said, “they’re talking about children’s books and Mr. Potato Head, and imagining terrorists at the border, and I just think it’s a sad commentary on how little they have to say to the voters they need to win the next election.”

Related: Marjorie Taylor Greene Is on Her Way to Becoming a Household Name

Republicans are also talking about schools, especially about getting them reopened on what everyone hopes is the other side of the pandemic. In the interview, Emmer cited the “college-educated suburbs” as particularly receptive to the argument due to frustration with school officials’ hesitation to return for in-person learning. While students may be back in the classroom by the time voters cast their ballots next year, he said, the long-term adverse effects of extended remote learning will be a ticking time bomb for Democrats during the home stretch of House campaigns.

“They think that you can flip the switch and say, ‘We’ll get them back into school before the election, it won’t be an issue,’” he said. “If you really care about kids who are in challenging situations, you’d have your public schools open yesterday.”

Maloney said he wants schools open too, but with a focus on safety. He cast the critique as flippant, but also used it to highlight the larger divide between the two parties with respect to the kinds of coalitions they’re trying to build.