About 7 in 10 Voters Favor a Public Health Insurance Option. Medicare for All Remains Polarizing

Bipartisan backing for public option persists as Democrats, Republicans deeply split on Medicare for All 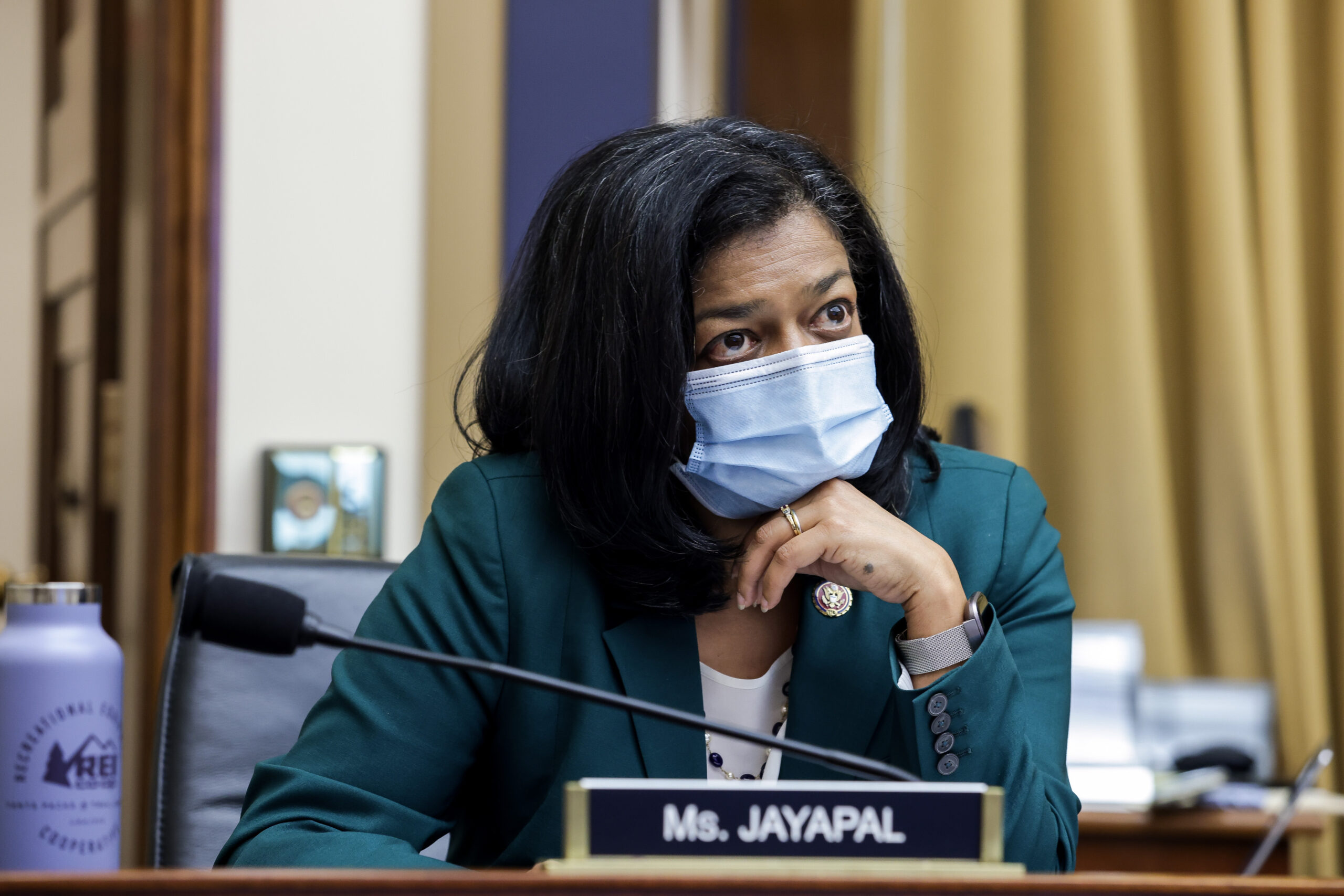 Rep. Pramila Jayapal (D-Wash.), pictured July 29, 2020, on Capitol Hill in Washington, D.C., reintroduced a Medicare for All bill last week. A new Morning Consult/Politico poll found that 55 percent of voters support Medicare for All, an unchanged level of support compared to a year ago. (Graeme Jennings/Getty Images)
By Gaby Galvin

As congressional Democrats weigh how far to go to expand health coverage, a new survey indicates more than half of voters are in favor of either a “Medicare for All” single-payer plan or a public health insurance option — but they largely prefer the latter.

Overall, 55 percent of voters said they support Medicare for All, according to the Morning Consult/Politico survey, a level that is unchanged from the onset of the COVID-19 pandemic in March 2020. 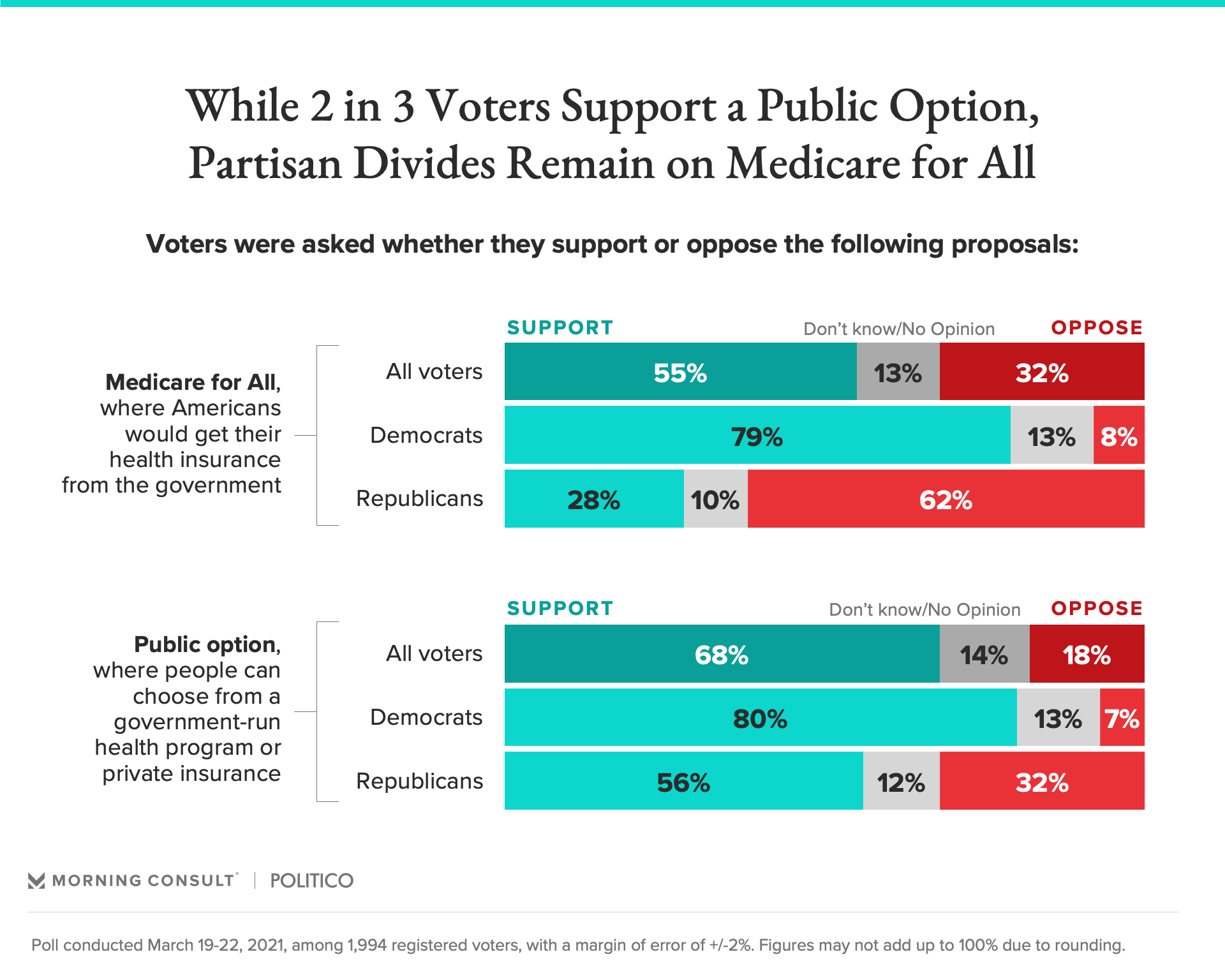 “The pandemic has exposed all of the holes in our existing health care safety net and how fragile our employer-based system is, but it doesn’t seem to be that the higher level of awareness is translating into support for Medicare for All,” said Sabrina Corlette, a research professor and co-director of the Center on Health Insurance Reforms at Georgetown University.

Democratic voters were about equally supportive of Medicare for All, a single-payer system where everyone would get their health insurance from the government, and a public option that would allow people to buy health coverage either from a government-run program or from private insurers. Republicans, however, were more likely to favor a public option: 56 percent said they support such a plan and 32 percent said they oppose it.

Overall, 68 percent of voters said they support a public option, up from 63 percent in February 2020, while 18 percent oppose it. Democrats and Republicans have both reported upticks in support since last year.

Even so, “I definitely would not take this as a sign that it’s going to be smooth sailing” to enact a public option, Corlette said.

The findings come as congressional Democrats offer dueling legislation to expand public health insurance, amid ongoing opposition from Republicans and industry players. Last week, a group of more than 100 House Democrats led by Rep. Pramila Jayapal of Washington reintroduced a Medicare for All bill, picking up notable cosponsors like New Jersey Rep. Frank Pallone, chair of the House Energy and Commerce Committee.

Other lawmakers, including Democratic Sens. Tim Kaine of Virginia and Michael Bennet of Colorado, have proposed a public health insurance option, a more measured approach that President Joe Biden supported during his campaign.

Related: Congressional Democrats Gear Up for Public Option Debate in Next Legislative Package

Dr. Susan Rogers, president of Physicians for a National Health Program, which advocates for a single-payer system, similarly said a public option would not go far enough to rein in the “profit-driven system” and that “the whole idea of coupling employment to health insurance is not logical.”

Meanwhile, Lauren Crawford Shaver, executive director of Partnership for America’s Health Care Future, which represents hospitals, drugmakers and insurers, described Medicare for All and the public option as “one-size-fits-all” programs “controlled by politicians,” and said in an emailed statement that they would be less popular if polling went “beyond bumper sticker slogans and incomplete descriptions.”

Corlette noted that as the debate over Medicare for All and the public option heats up this year, public support — or opposition — for either plan could change quickly.

“Once people start to see details of legislation, and once various stakeholders start mounting campaigns or advertising efforts to persuade the public one way or another, these views can shift,” Corlette said.

The latest survey was conducted March 19-22 among 1,994 registered voters and has a 2-point margin of error.

Related: About 2 in 5 Voters Say Passing a Health Care Reform Bill Should Be a Top Priority for Biden’s First 100 Days
Congressional Politics Health Insurance Medicare for All