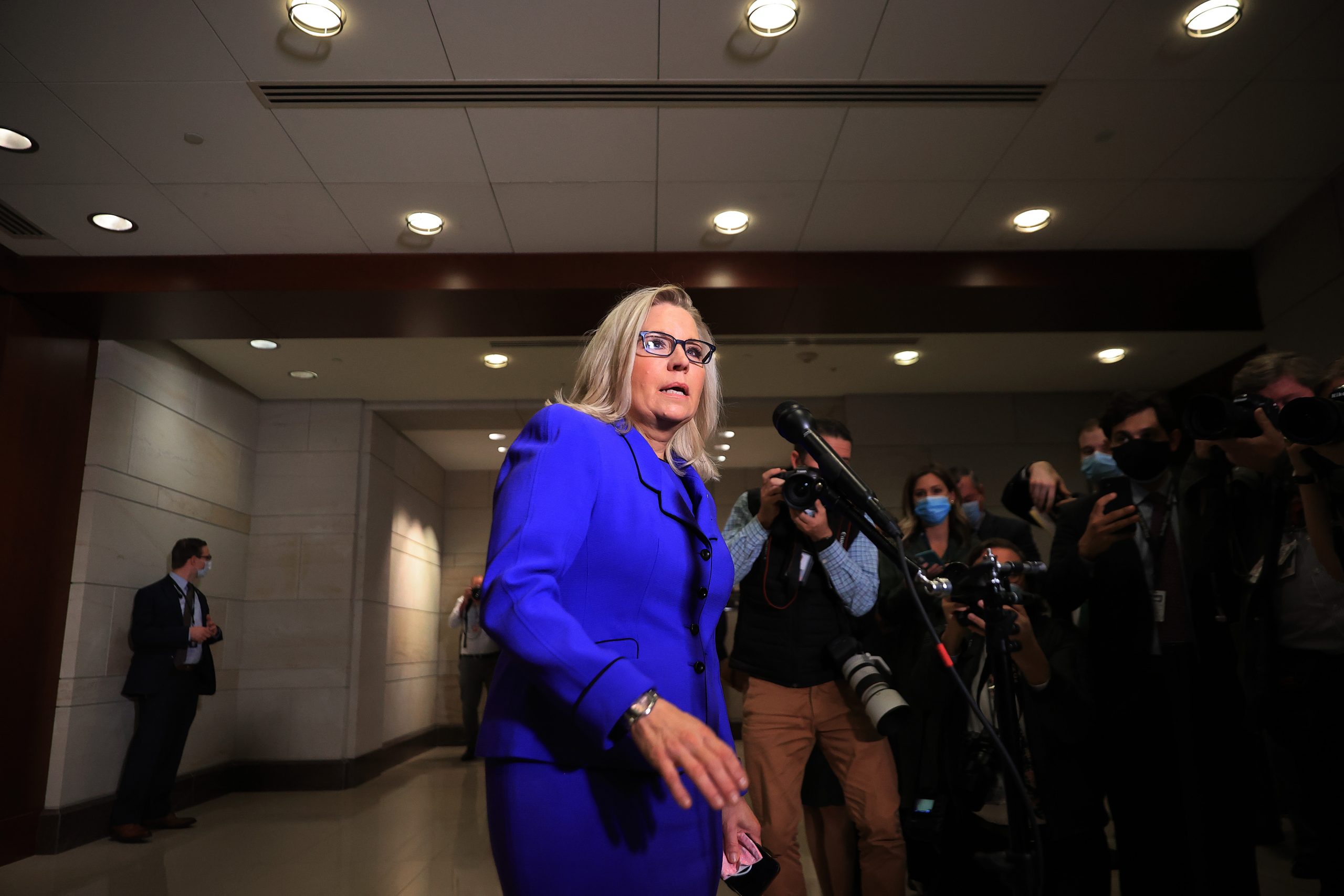 Rep. Liz Cheney (R-Wyo.) talks to reporters on May 12 after House Republicans voted to remove her as conference chair. The share of GOP voters with an unfavorable view of Cheney ticked up by 10 points over the past week, to 53 percent. (Chip Somodevilla/Getty Images)
By Eli Yokley

Wyoming Rep. Liz Cheney used her ejection as chair of the House Republican Conference to launch a campaign to rid her party of former President Donald Trump’s influence, declaring to a bank of cameras last week, “I will do everything I can to ensure that the former president never again gets anywhere near the Oval Office.” But the latest Morning Consult/Politico poll shows most Republican voters aren’t siding with her. 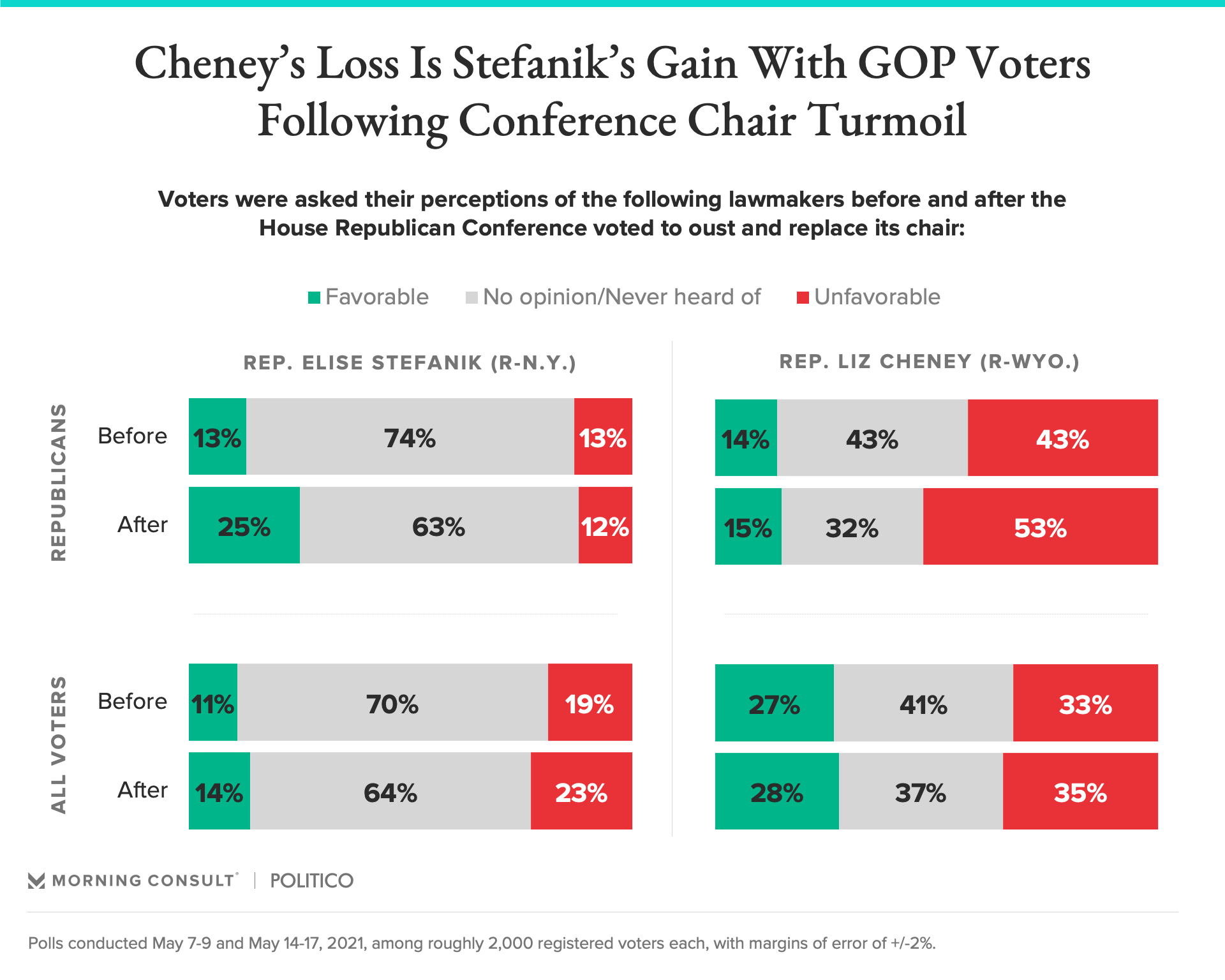 GOP voters are less certain about her replacement atop the caucus, Rep. Elise Stefanik, though the short-term trends look good for the New York Republican: Since polling conducted before her May 14 promotion, her favorability among Republicans has increased by 12 points, to 25 percent.

Roughly 3 in 5 Republican voters have yet to form an opinion about Stefanik, leaving room for views to shift as she takes on the role of No. 3 in House leadership while Republicans work to regain their majority in next November’s elections.

Compared with other prominent lawmakers, Stefanik — who in 2014 became the youngest ever elected member of Congress at age 30, a record that has since been broken twice —  begins her tenure as conference chair with name recognition and popularity on par with that of House Minority Whip Steve Scalise (R-La.), Rep. Marjorie Taylor Greene (R-Ga.), who gained acclaim after House Democrats removed her from her committee posts over inflammatory posts online, and Rep. Matt Gaetz (R-Fla.), who’s facing a federal probe over whether he violated child sex trafficking laws. 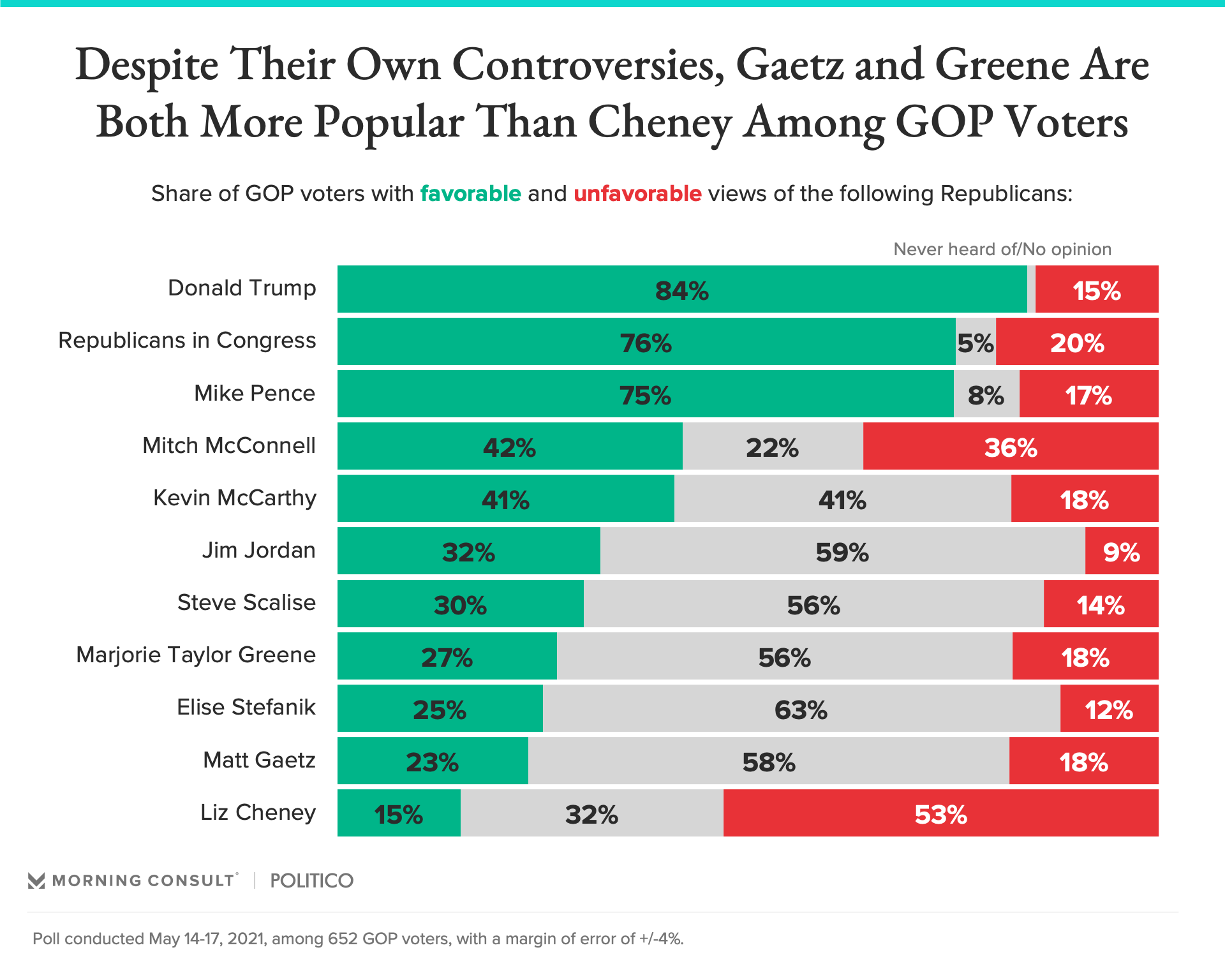 All four lawmakers are more popular than Cheney, whose favorability rating among Republicans matches the share who dislike Trump. According to the latest survey, 84 percent of GOP voters favor the 45th president, continuing his status as the most popular figure in the Republican Party – a standing he hasn’t lost since the Jan. 6 riot, which was fueled by the unfounded claims of widespread voter fraud that prompted Cheney to repeatedly criticize Trump in public.

In several interviews after being removed as the House GOP conference chair last week, Cheney was pressed on how far she would take her campaign to rid the GOP of Trump as she pushes to get it back to “substance and policy.”

As a target of Trump’s ire, she is likely to face a fierce Republican primary in Wyoming next year – raising the prospect that she might not be in Congress to carry on her fight. Asked if she would run for the Republican nomination for president, she responded: “Whatever it takes.”

At the embryonic stage of the budding presidential 2024 campaign, there is almost no appetite among Republican voters for Cheney – or others who have stood up against Trump’s influence, for that matter. 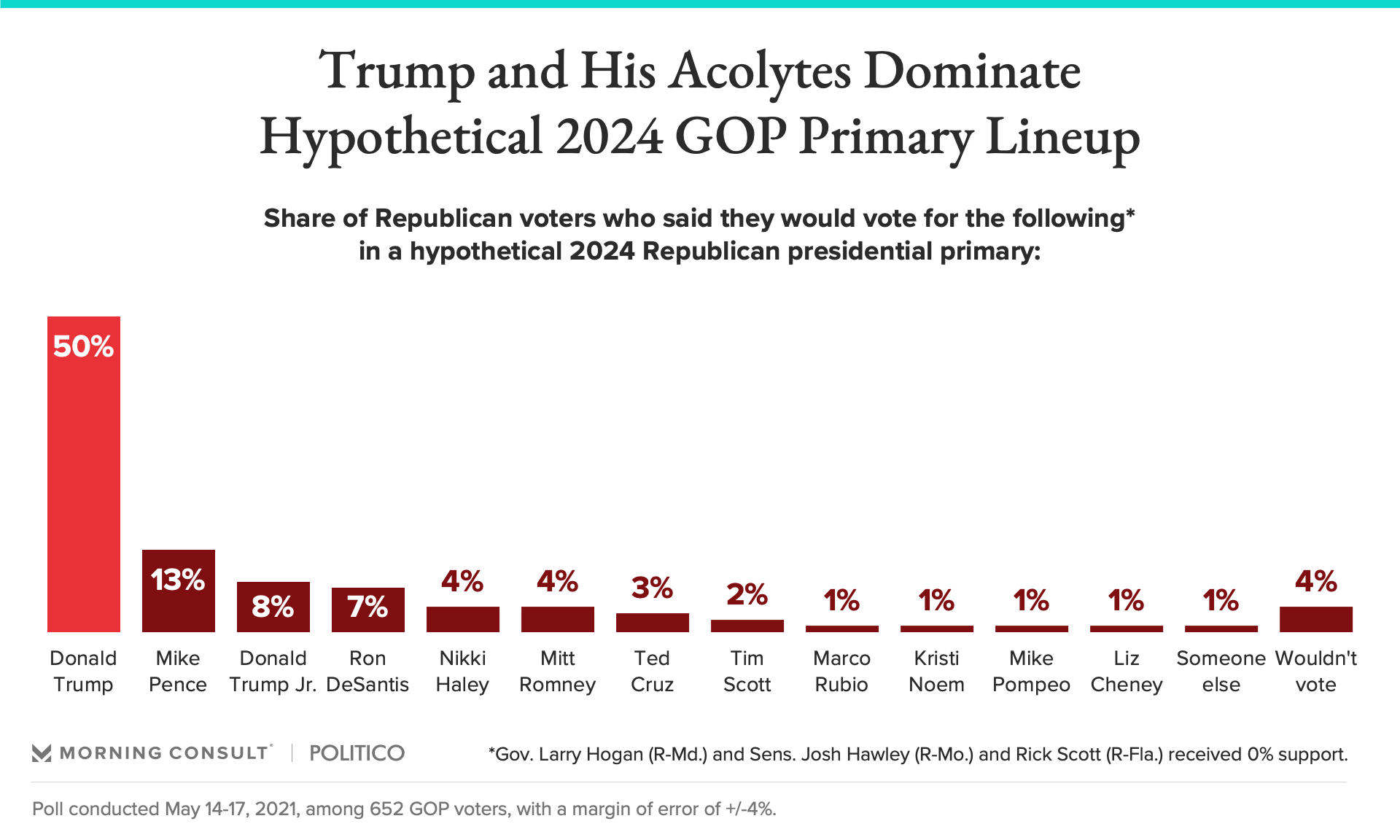 Just 1 percent of Republican voters said they would vote for Cheney if the 2024 Republican presidential primary were held today. Another 4 percent said they would support Sen. Mitt Romney (R-Utah), the party’s 2012 nominee who backed Trump’s second impeachment, and none said they would back Maryland Gov. Larry Hogan, who has pitched his own vision for a renewed Republican Party.

Half of Republican voters said they would vote for Trump, while most others said they’d back any number of Republican candidates who have aligned closely with him and could pass on a run if he were to give it another go. Thirteen percent of GOP voters said they would vote for former Vice President Mike Pence in the hypothetical contest, 8 percent would back Donald Trump Jr. and 7 percent would support Florida Gov. Ron DeSantis.