A Year After George Floyd’s Murder, Most Americans Are Not Optimistic About Future Race Relations

Views among Democrats, Black Americans about seriousness of police violence diverge from others 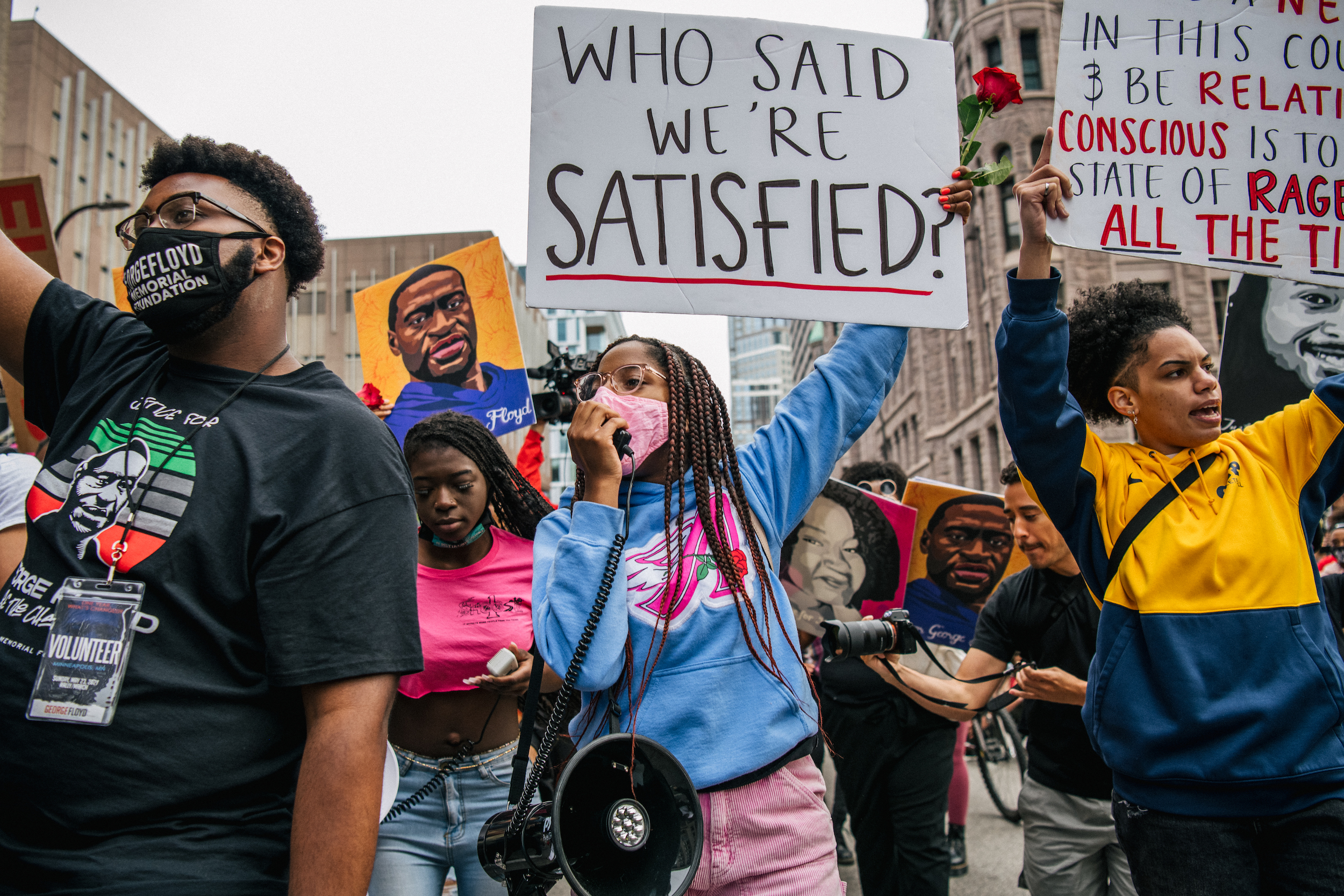 People march during an inaugural remembrance demonstration for George Floyd on May 23 in Minneapolis. New polling shows nearly half of voters believe race relations in the United States have worsened over the past five years, and only 3 in 10 expect them to improve in the near future. (Brandon Bell/Getty Images)
By Eli Yokley

A year after the police killing of George Floyd sparked the summer of 2020’s Black Lives Matter protests, the bulk of Americans don’t expect race relations to improve, despite the popularity of this generation’s civil rights movement and most policies aimed at holding law enforcement to account for its interactions with people of color.

According to a new Morning Consult/Politico poll, 46 percent of Americans said race relations have gotten worse over the past five years, including similar shares of adults when accounting for race and party identification, while just 3 in 10 expect them to improve over the next five years. 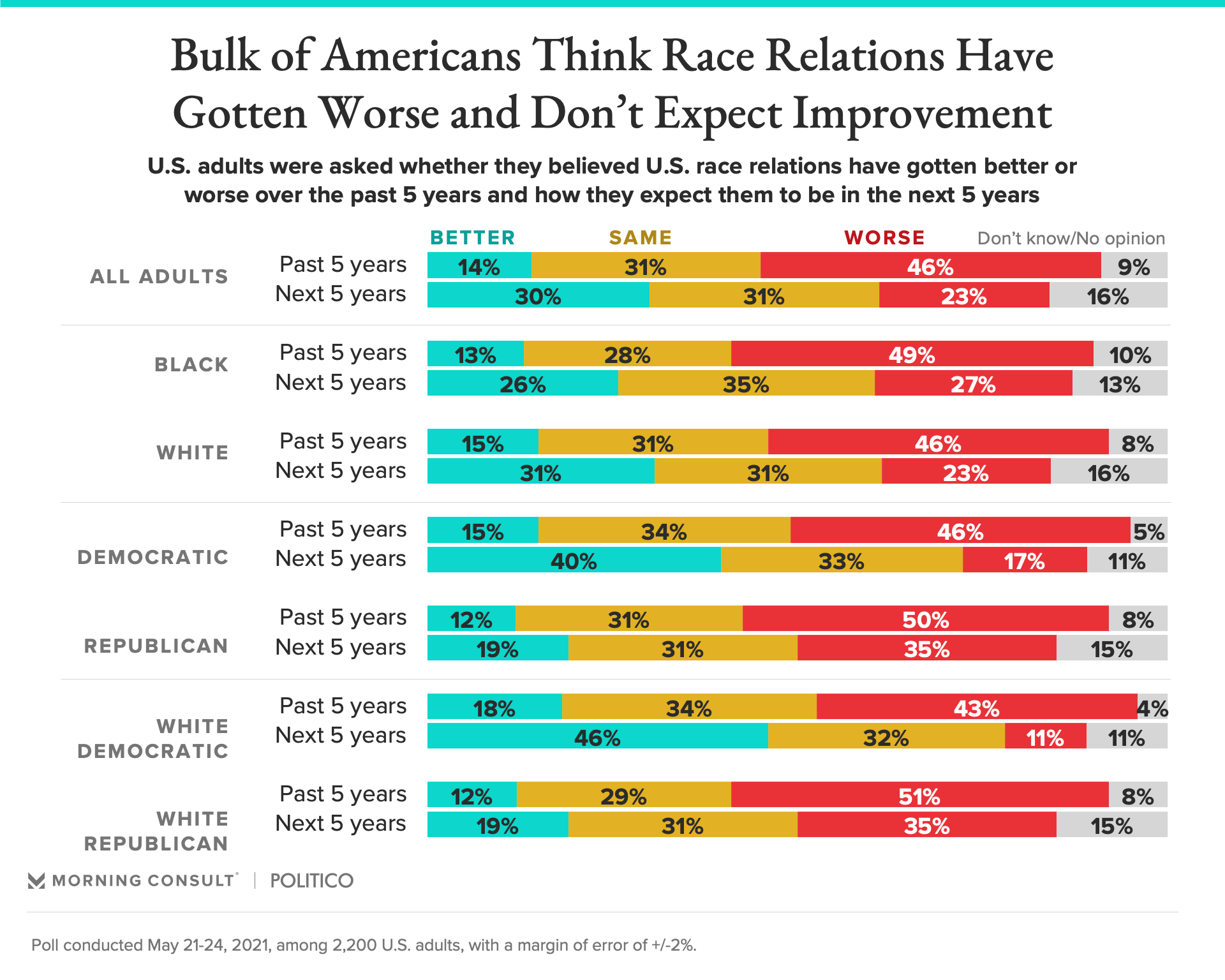 The share of Americans expressing optimism about the future of the country’s race relations is driven largely by Democrats, who are twice as likely as Republicans to say things will get better over the next five years. By comparison, just a quarter of Black Americans expect race relations to improve in the coming years and the same share predict things will get worse, while a plurality (35 percent) think the status quo will hold.

The anniversary of Floyd’s death comes roughly a month after a jury convicted former Minneapolis police officer Derek Chauvin for his murder – a decision that was widely supported by Americans and largely seen as justice for Floyd.

Chauvin’s conviction led to an increase in the share of Americans who said the Black Lives Matter protests brought about meaningful conversations and change in the country, though that sentiment has softened over the past month – down 8 points among Black voters, to 25 percent percent, and down 6 points among Democrats, to 24 percent – as more incidents of police violence against Black Americans have surfaced and legislation on police reform has stalled on Capitol Hill.

Since the Floyd murder and associated protests last summer, which were some of the most salient news events of 2020, there has been a significant drop in the share of Americans who believe police violence against the public is a “serious” problem in the United States. 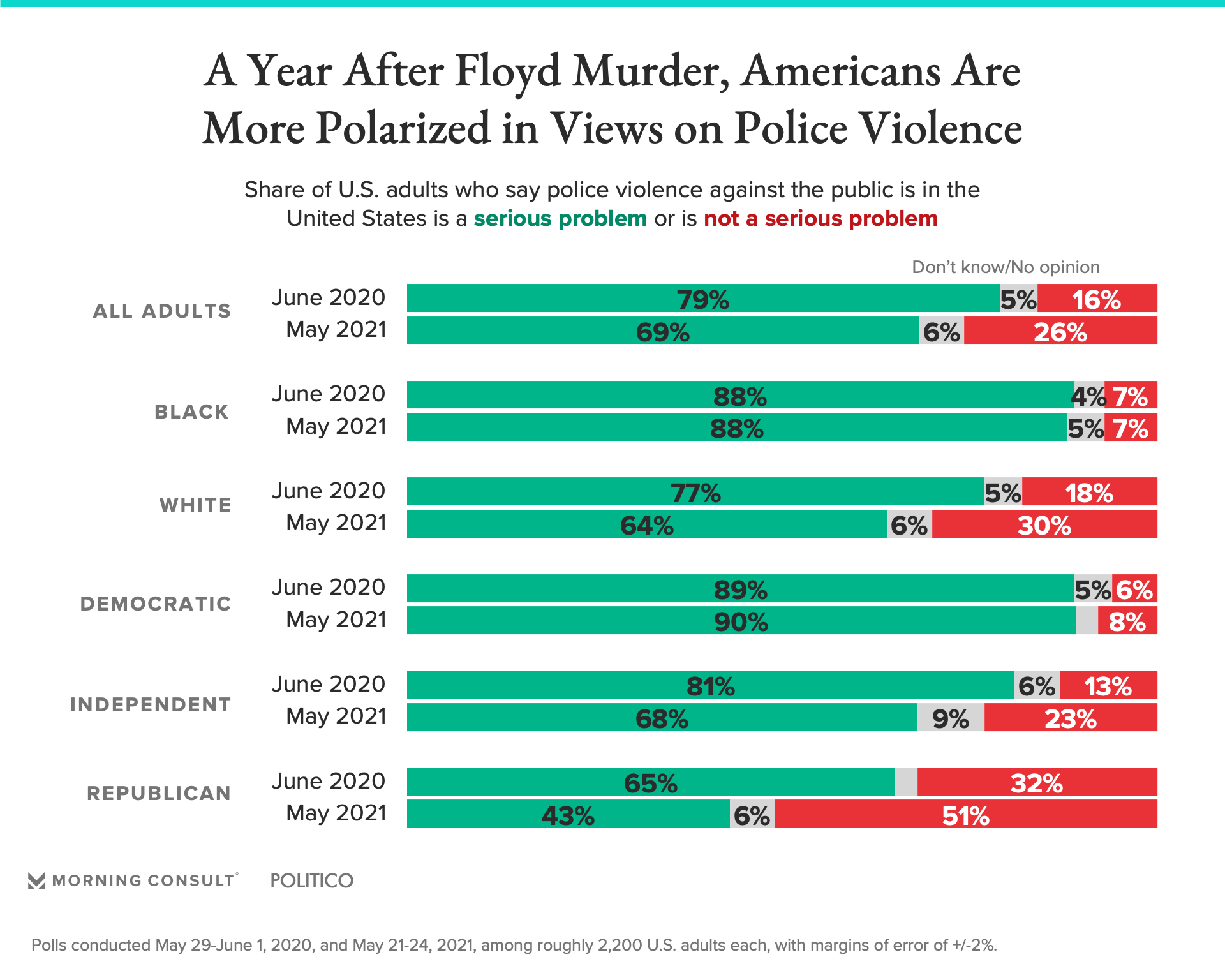 Over the past year, the share of Americans who consider police violence to be a serious problem dropped from 79 percent to 69 percent, driven by defections among whites, independents and Republicans. GOP adults are now most likely to say it is not a serious problem.

Over the same time period, the same groups have helped to drive a double-digit decline in the popularity of the Black Lives Matter movement. 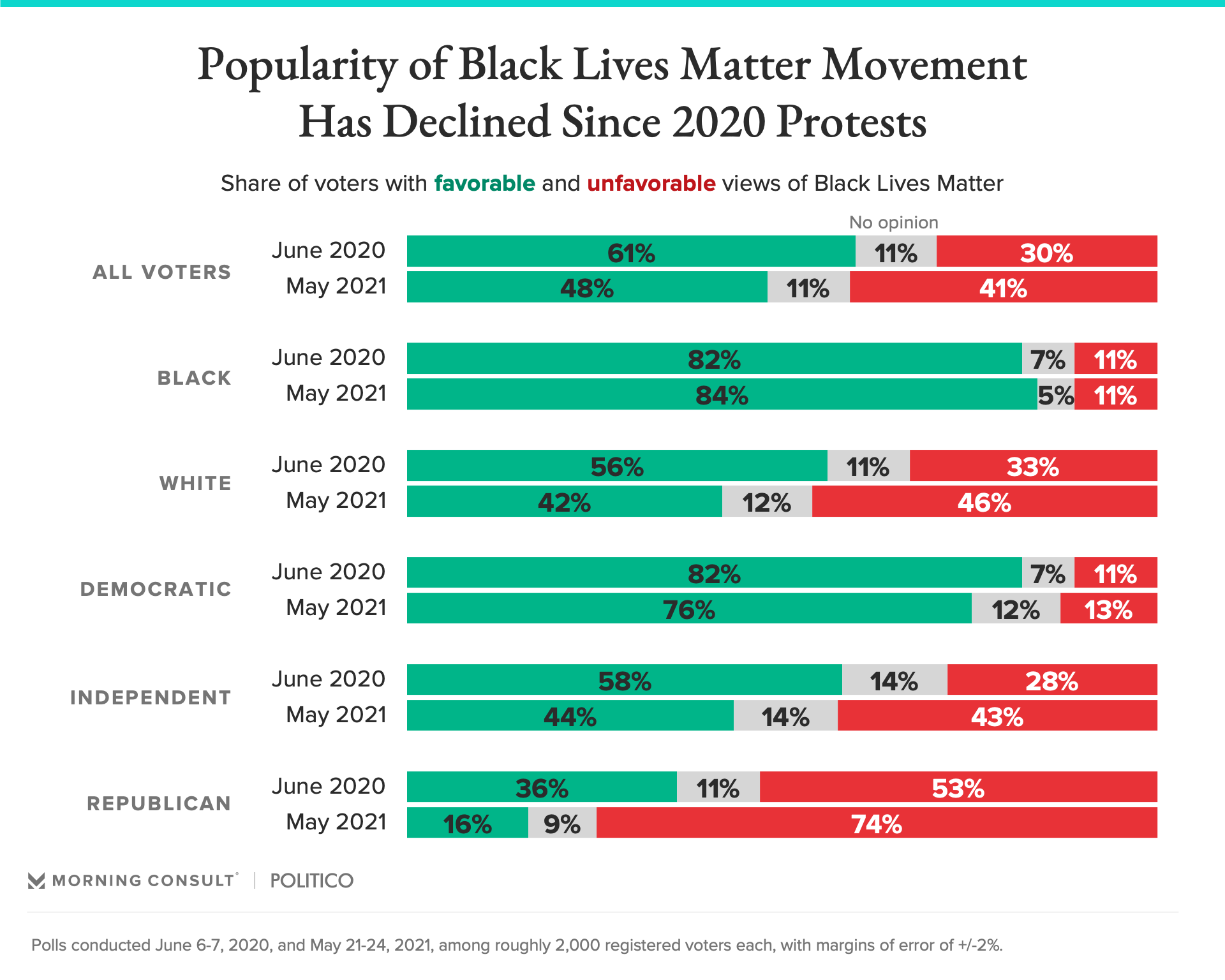 According to the latest survey, 48 percent of voters hold favorable views of the civil rights movement, down 13 points from a year ago, including similarly sized drops among white and Republican voters, both of whom are most likely to hold negative views about Black Lives Matter.

The popularity of Black Lives Matter roughly matches the popularity of Vice President Kamala Harris, the highest-ranking Black official in the federal government. Both are more popular than any other partisan government official except President Joe Biden, who launched his campaign for the White House on a pledge to address racial division in the United States and used his first address to a joint session of Congress to call on lawmakers to send him police reform legislation by the anniversary of Floyd’s death.

Lawmakers have missed that deadline, but they are nonetheless speaking positively about bipartisan talks to try to reach an agreement on a policing overhaul bill. As they continue negotiations, key pieces of the police reform debate retain bipartisan backing among voters. 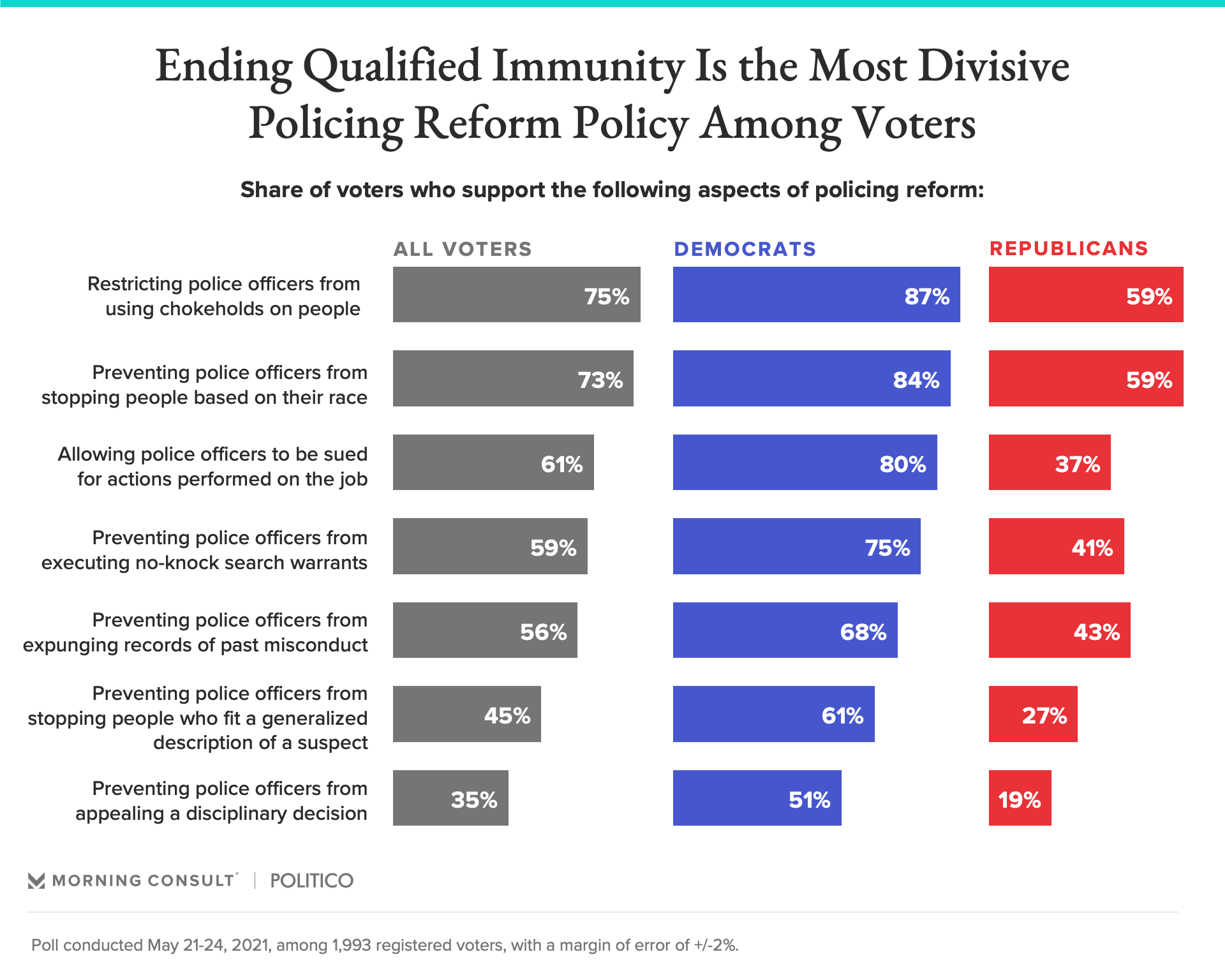 Nearly 3 in 4 voters, including majorities of Democrats and Republicans, back bans on the use of chokeholds or racial profiling. A majority (56 percent) support banning police officers from expunging records of past misconduct, including a 43 percent plurality of GOP voters.

The issue of allowing police officers to be sued for actions performed on the job, which would revoke a legal doctrine known as qualified immunity, is the most divisive among the voting public: While 4 in 5 Democrats support the measure, half of Republicans oppose it. House Majority Whip James Clyburn (D-S.C.), the highest-ranking Black official in Congress, has said disagreements over the provision should not stall passage of a larger bill, signaling a potential path forward for federal changes to the policing system.