51% of voters say Confederate statues should remain standing, while 30% say they should come down 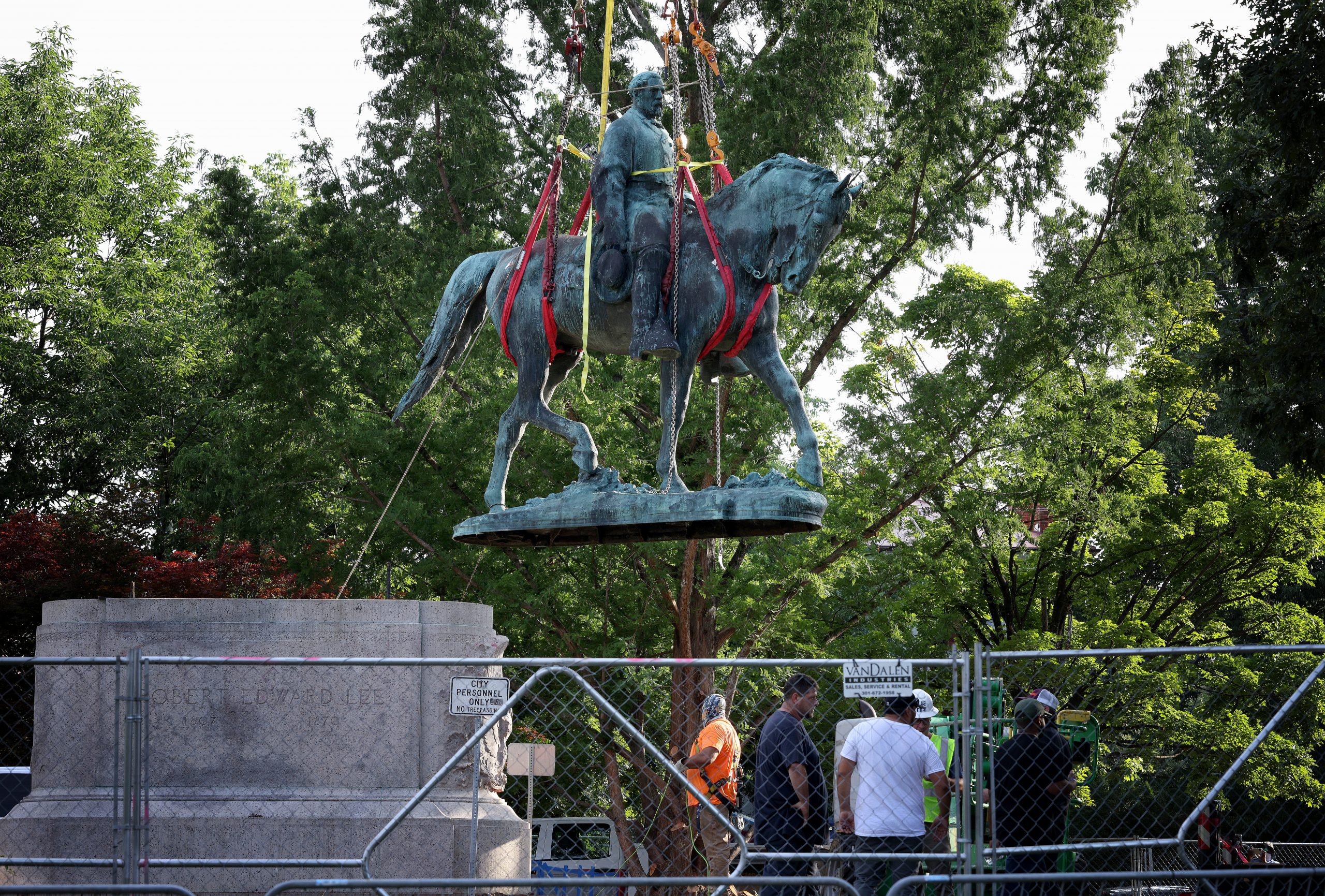 Workers remove a statue of Confederate General Robert E. Lee from Market Street Park July 10, 2021 in Charlottesville, Va. Just over half of voters in a recent Morning Consult/Politico poll said statues of Confederate leaders should not be removed. (Win McNamee/Getty Images)
By Cameron Easley

The city of Charlottesville, Va., earned national headlines over the weekend when it uprooted statues of top Confederate leaders Robert E. Lee and Thomas “Stonewall” Jackson. Late last month, 67 House Republicans joined a united House Democratic Caucus in voting to remove similar statues from the halls of the Capitol. And earlier this year, the Pentagon moved forward with plans to rename military bases that honor the Confederacy, appointing half of the panel tasked with carrying out the rebranding.

But all of these moves continue to be relatively unpopular, according to Morning Consult/Politico trend polling.

In the latest July 9-12 survey of registered voters, 51 percent of respondents said they believed statues of Confederate leaders should remain standing, compared with 3 in 10 who said they should be taken down. Both figures are in line with a survey conducted in August 2017 after a deadly confrontation between white supremacists and counterprotesters at a white supremacist rally in Charlottesville protesting the proposed removal of the Lee statue. 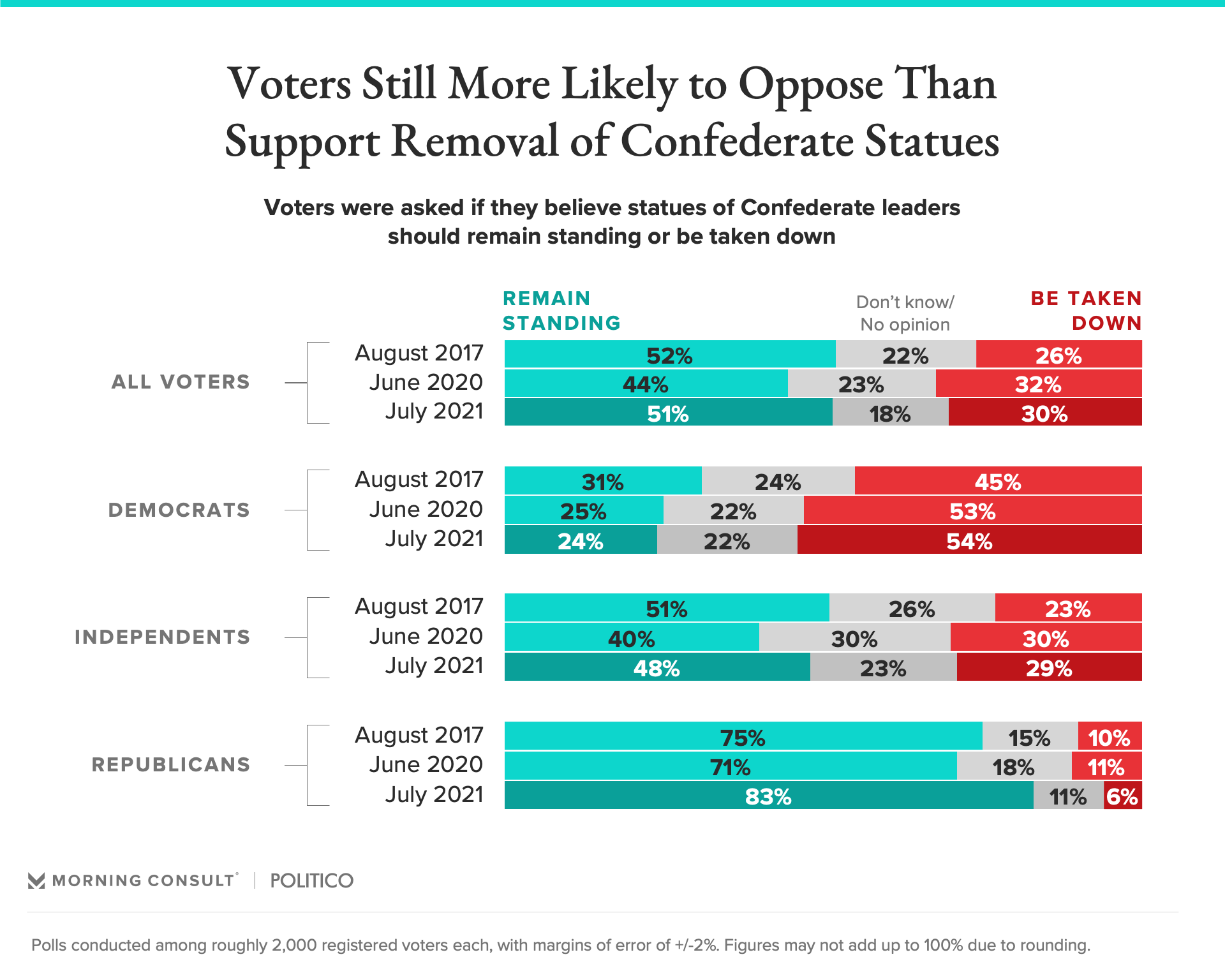 The findings also represent a return to status quo for the public, who last year — in the wake of  George Floyd’s murder by a Minneapolis police officer — increasingly favored the removal of such statues. Each poll was conducted among roughly 2,000 registered voters, with margins of error of 2 percentage points.

As was the case in the June 2020 poll, the latest survey found Republicans were more united on the issue than Democrats: While 54 percent of Democrats say the statues should be taken down, 83 percent of GOP voters voiced the opposite opinion. What’s more, Republicans were even more likely to hold that view than they were nearly four years ago, when 75 percent said they should remain standing.

That dynamic also carried over to the question of Confederate names on U.S. military installations: Half of voters said they preferred to keep bases such as Fort Hood, Fort Benning and Fort Bragg just as they were, versus 34 percent who said those bases should be renamed.

Once again, Republicans were overwhelmingly in favor of keeping the names as is — even more so than last year — compared with a more divided Democratic voter base.

Similarly, Republicans are increasingly likely to believe that the Confederate flag is more of a symbol of Southern pride than a harbinger of racism: 77 percent of GOP voters said they see it more as the former in the new poll, up from 70 percent who said the same last year and in a 2015 poll.

Nearly half of all voters (47 percent) said they saw the flag as a symbol of Southern pride rather than one of racism (36 percent).

Related: Many GOP Voters Hold Strong Views on Critical Race Theory. Democrats? Not So Much
Race in America