GOP Voters Aren’t Too Mad About the Midterms Yet, Even if They’re Slightly Angrier Than Democrats 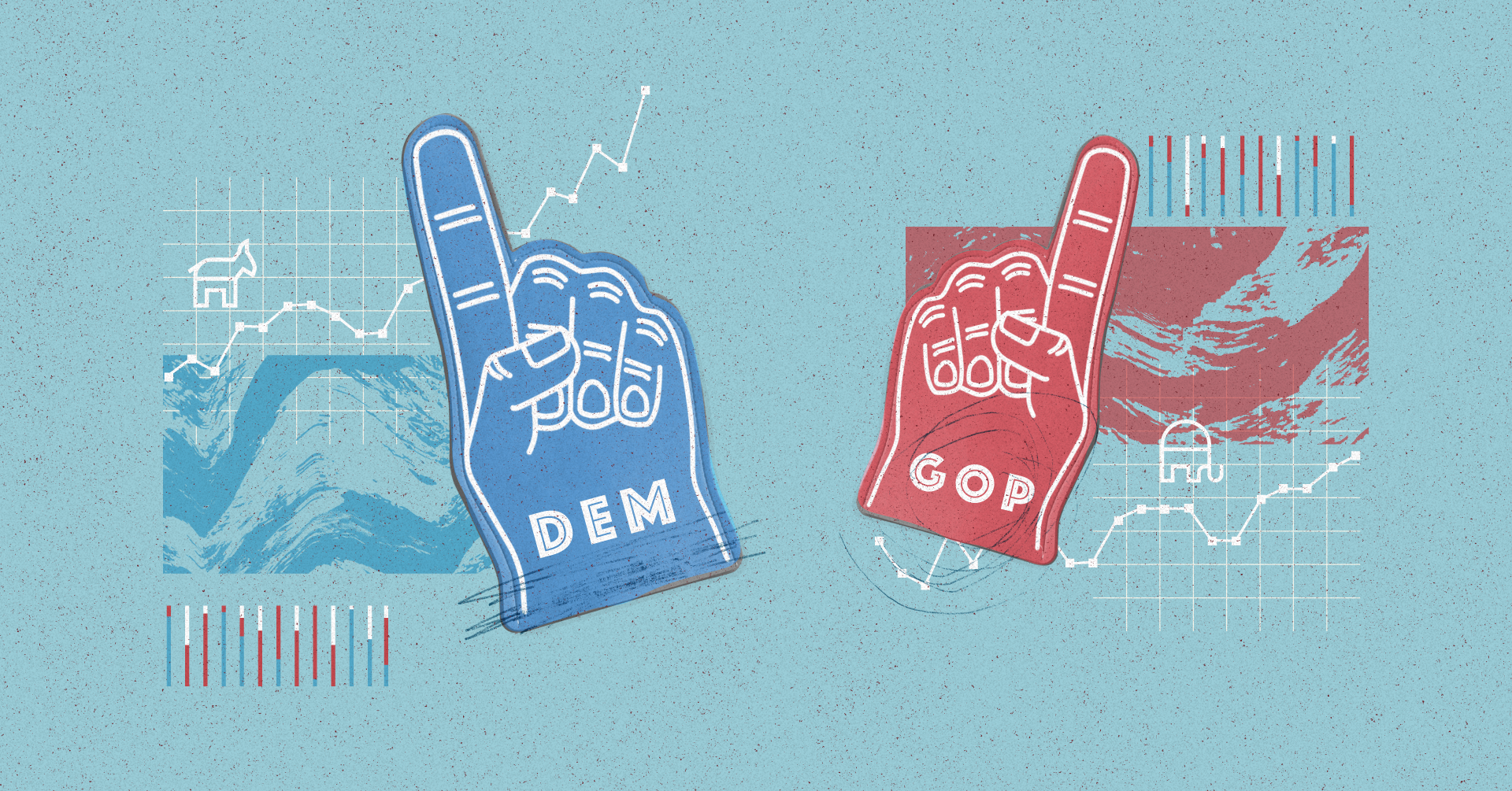 Conservatives on Capitol Hill and in the media are spending the early months of President Joe Biden’s tenure in office stoking resentment among GOP voters, trying to re-create the grassroots tea party-era fury that delivered boffo House gains and a number of critical Senate seats 11 years ago. But new polling suggests efforts to dial up the antipathy need more time.

In the latest edition of Morning Consult’s annual State of the Parties survey, 35 percent of GOP voters said the word “angry” described how they felt about next year’s midterm elections at least “somewhat well” — only slightly more than the 31 percent of Democratic voters who agreed. 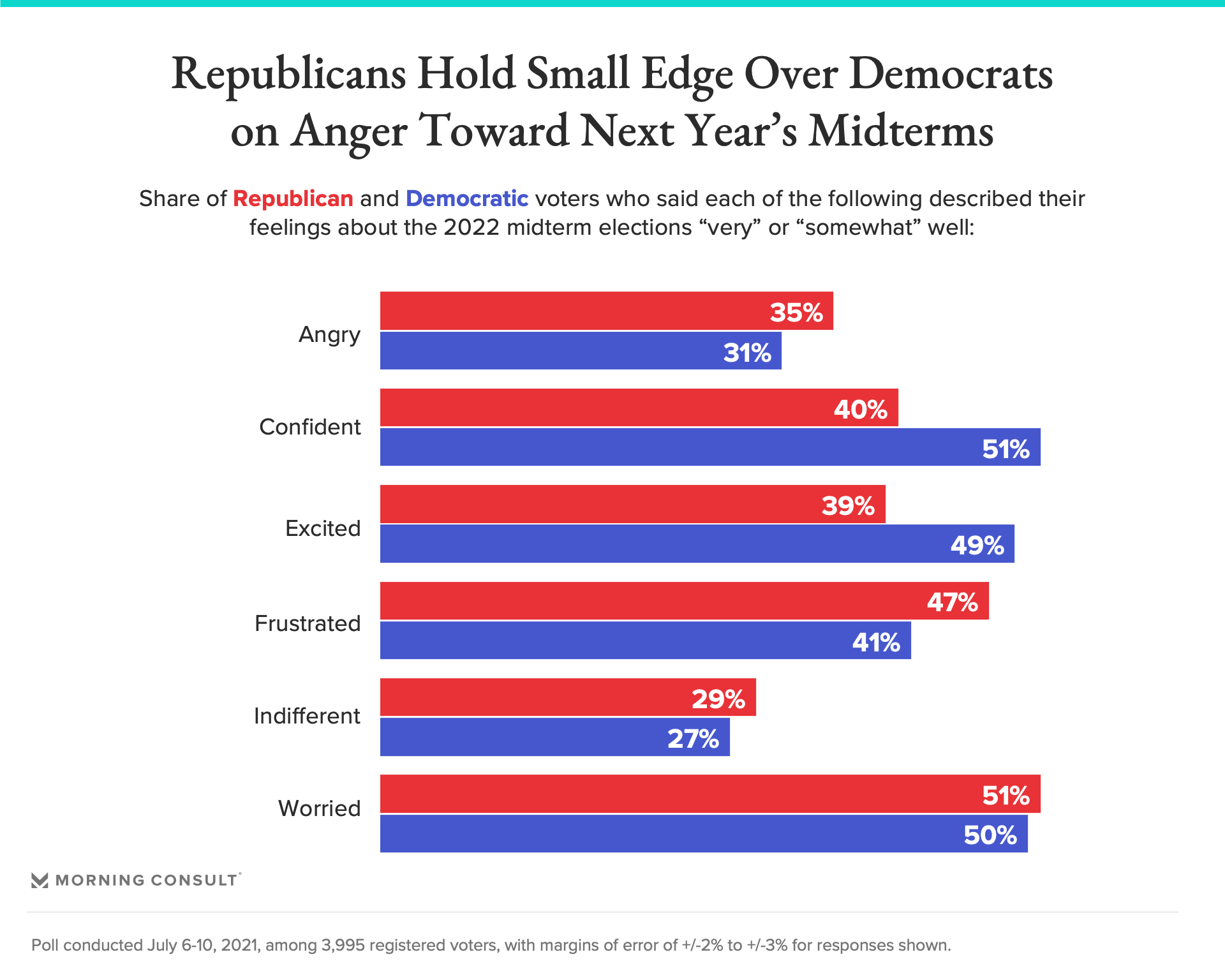 It’s a far cry from the so-called anger gap of the last midterm cycle, when Morning Consult polling found Democrats were 21 percentage points more likely than Republicans to use “angry”  to describe their mood toward the 2018 elections. Political research has shown that anger is among the most effective emotions for spurring voter participation, a dynamic that was not lost on the past two major election cycles, which both saw some of the highest voter turnout in modern history.

To be sure, the comparison of voters’ moods in 2021, a year before the midterms begin in earnest, and 2018 is an imperfect one at best. There’s plenty of time for Republicans to get angrier.

That’s the expectation for Masha Krupenkin, an assistant professor at Boston College who co-authored a 2018 study on negative sentiment and voter participation.

“We know that most people don’t really pay very much attention to politics and elections until right before,” she said in an interview last week. “As time goes on, anger among Republicans is likely to increase as more and more of them start to think about the election.”

While that’s certainly true, the numbers also reinforce the notion of a relatively staid moment of U.S. politics when comparing Biden’s early term to those of his immediate predecessors. The tea party protests of early 2009 and 2017’s Women’s March reflected organic and potent opposition to Barack Obama’s and Donald Trump’s presidencies that have so far been unmatched in 2021.

Today’s relative serenity,  which may appear all the more jarring to the observers on Capitol Hill who witnessed an attempted insurrection in early January, raises another possibility: Perhaps a return to midterm normal is on the docket next year.

“Now that Trump is out of office, and now that he doesn’t get the same kind of media oxygen, people are reverting to their regular patterns of information consumption, which is oftentimes a bit less engaged,” said Krupenkin.

And even if Republicans can’t get their voters as angry at Biden’s presidency as they were at Obama’s, a return to typical midterm turnout under a Democratic president — which tends to favor the GOP — would likely be enough to return them control of the House, if not the Senate as well. Republicans only need to flip nine seats to regain control of the House, and are just one Senate seat shy of retaking that chamber.

Related: Democrats’ Drive to the Left Threatens Their Grip on Power
2022 Elections State of the Parties