Biden’s the Top Democrat in Washington, but Fewer Than 1 in 5 Voters Say He Best Represents His Party

No. 46’s moderate demeanor could complicate GOP efforts to make the midterms about him, but his standing exposes other challenges for Democrats 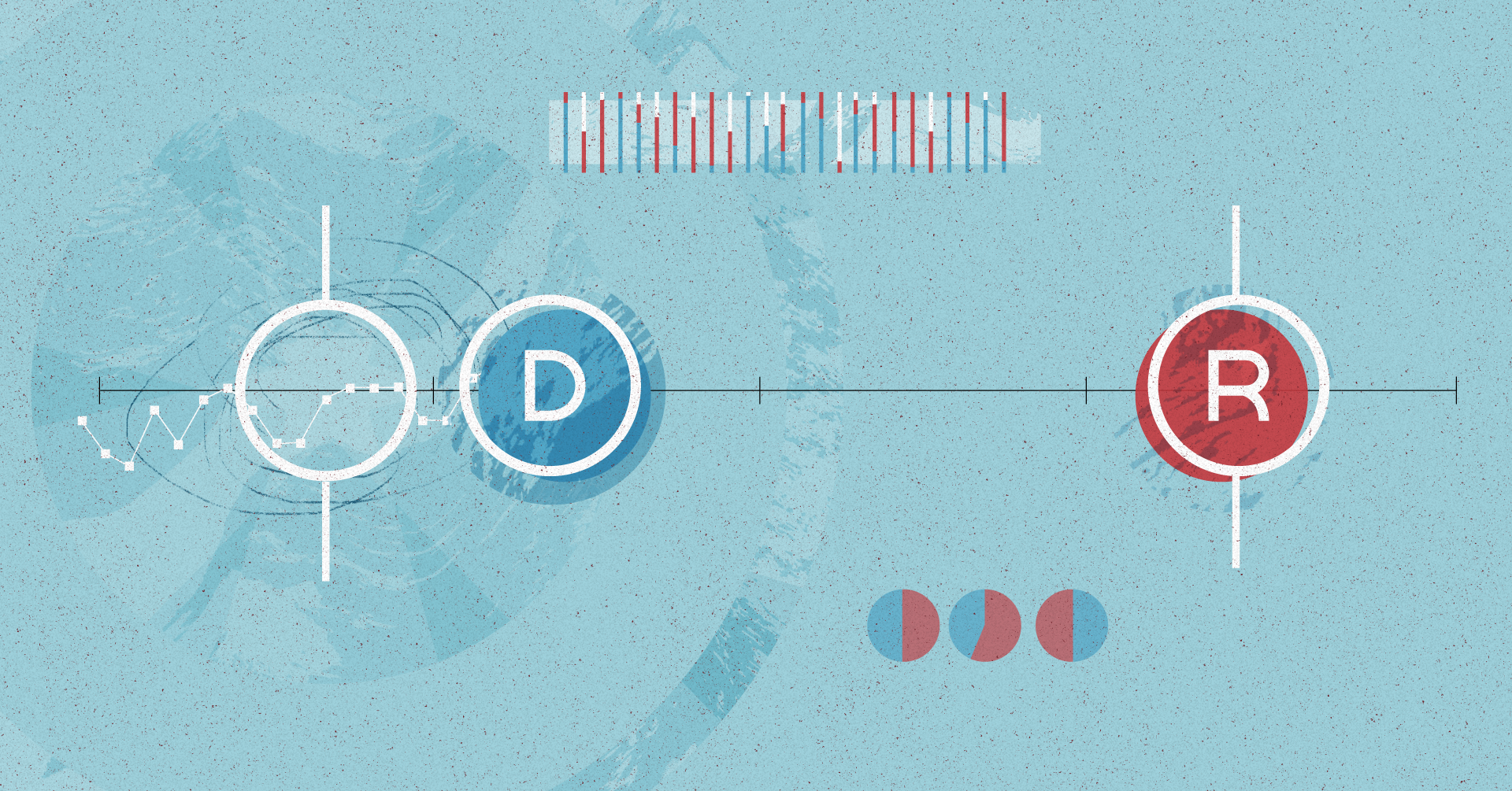 President Joe Biden is fairly popular with voters, who have thus far given him positive marks for his handling of key issues such as the economy and the pandemic, even as Republicans try to tarnish his reputation ahead of next year’s midterm elections.

But six months into his presidency – and almost a year since he accepted his party’s nomination – the latest edition of Morning Consult’s annual State of the Parties survey found relatively few voters believe him to be the figure that best represents the Democratic Party’s current values. Interviews with political scholars and operatives suggest that this early dynamic could grant Democrats an opportunity to shirk the traditionally treacherous dynamic of midterms as a referendum on the incumbent president, but it also gives Republicans room to tie Democratic targets to the party’s more extreme elements.

Eighteen percent of voters in the July 6-10 survey said Biden best represents the Democratic Party’s current values, including 3 in 10 Democrats and 14 percent of independents. Half of voters identified someone else from a list of nine other names — with the largest share (20 percent) selecting former President Barack Obama — and another 29 percent were unsure. 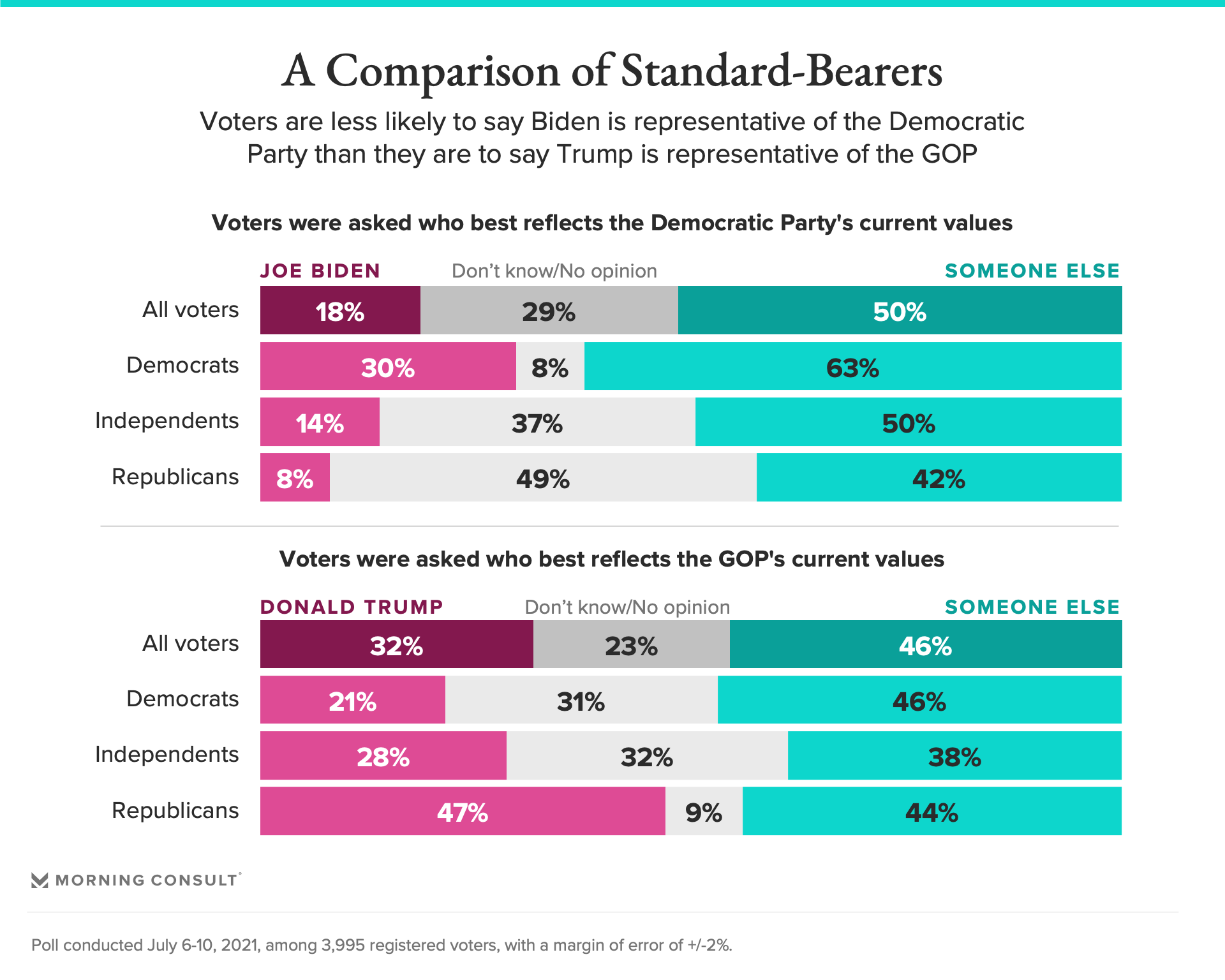 The findings show Biden to be less synonymous with the Democratic Party among the overall electorate than former President Donald Trump is with the GOP: 32 percent of all voters, including nearly half of Republicans, said Trump best represents the Republican Party’s current values, while 46 percent picked someone else.

Joshua Scacco, a professor of political communication at the University of South Florida, said Biden’s lack of stature even among Democratic voters is illustrative of a party that is “historically coalitional.” The president, he said, has responded to the circumstances by letting prominent voices representing different wings of the party “message in their own ways” to keep the union together.

Scacco, who co-authored “The Ubiquitous Presidency,” said Biden “is a return to a more transcendent president” whose “messaging is bipartisan and meant for the center,” following four years of Trump’s base-first approach that upended the modern presidential trend of de-emphasizing party affiliation.

Related: Democrats’ Drive to the Left Threatens Their Grip on Power

While Biden has lost some standing with independents since taking office, he remains popular with the bulk of the electorate: 52 percent approve of his job performance, according to the latest Morning Consult/Politico tracking.

Republican strategists say that his popularity – coupled with voters’ views that he is genuine about bipartisanship and less ideologically extreme than other Democrats – makes him a tough foil for their candidates in the initial stretch of the 2022 campaign, especially given how few voters associate him with the overall Democratic Party.

“If you’re a Democratic candidate, you want to be tied to someone who is personally popular,” said Matt Gorman, a Republican strategist who led communications for the National Republican Congressional Campaign Committee during the 2018 midterms.

It is more effective to run against Pelosi than it is Biden, and that's probably not going to change.

But Biden’s weak association with the current Democratic Party’s brand also creates a vacuum for the GOP to fill with more unsavory names when appealing to their base and independent voters – a strategy one Democratic strategist called a “guilt by association” tactic. Parker Hamilton Poling, the former executive director of the National Republican Congressional Committee, named as examples Rep. Alexandria Ocasio-Cortez (D-N.Y.) and her progressive compatriots, as well as House Speaker Nancy Pelosi (D-Calif.), a ubiquitous figure in down-ballot Republican campaign messaging.

“It is more effective to run against Pelosi than it is Biden, and that’s probably not going to change,” Poling said, adding that she doubts “Republican ad makers will be particularly disappointed” if Pelosi were to retire, as some have speculated, “because they still have the ‘Squad.’”

While Republicans note the tides can shift this far out from Election Day – inflation today or immigration tomorrow – Dan Sena, who led the Democratic Congressional Campaign Committee during the party’s successful 2018 midterms, said the current strategy puts the onus on Democratic incumbents to tie themselves closely to what voters see as Biden’s positive accomplishments, such as relief for the pandemic and small businesses, in places where he is popular.

“Fortify it now, in the months leading up to next summer, so it’s very clear you’re accomplishing things you worked with the president on,” he said.

In the face of budding buoyancy in GOP fundraising, some left-leaning groups have already begun to do just that as the party seeks to both maintain the president’s popularity and combat any waning enthusiasm within the party’s ranks or feelings that it has not accomplished enough.

But Democrats still have their own foil – the unpopular former president who looms large as an opposition force and in voters’ minds when thinking of the GOP as a whole. Already, Trump is flexing the political muscle to be a force in the Republican Party in a number of primaries, while his acolytes are hogging the headlines on Capitol Hill and the campaign trail.

“He has no incentive to go away, so he’s just going to hang out there and be a mess to these guys,” said Ian Russell, Democratic strategist and former DCCC official. “That is going to help us set up a choice rather than a referendum, and that’s a fight we can win because Biden’s not polarizing and this gang isn’t ready for prime time.”