49% of voters back withdrawal of U.S. forces, down 20 points since April 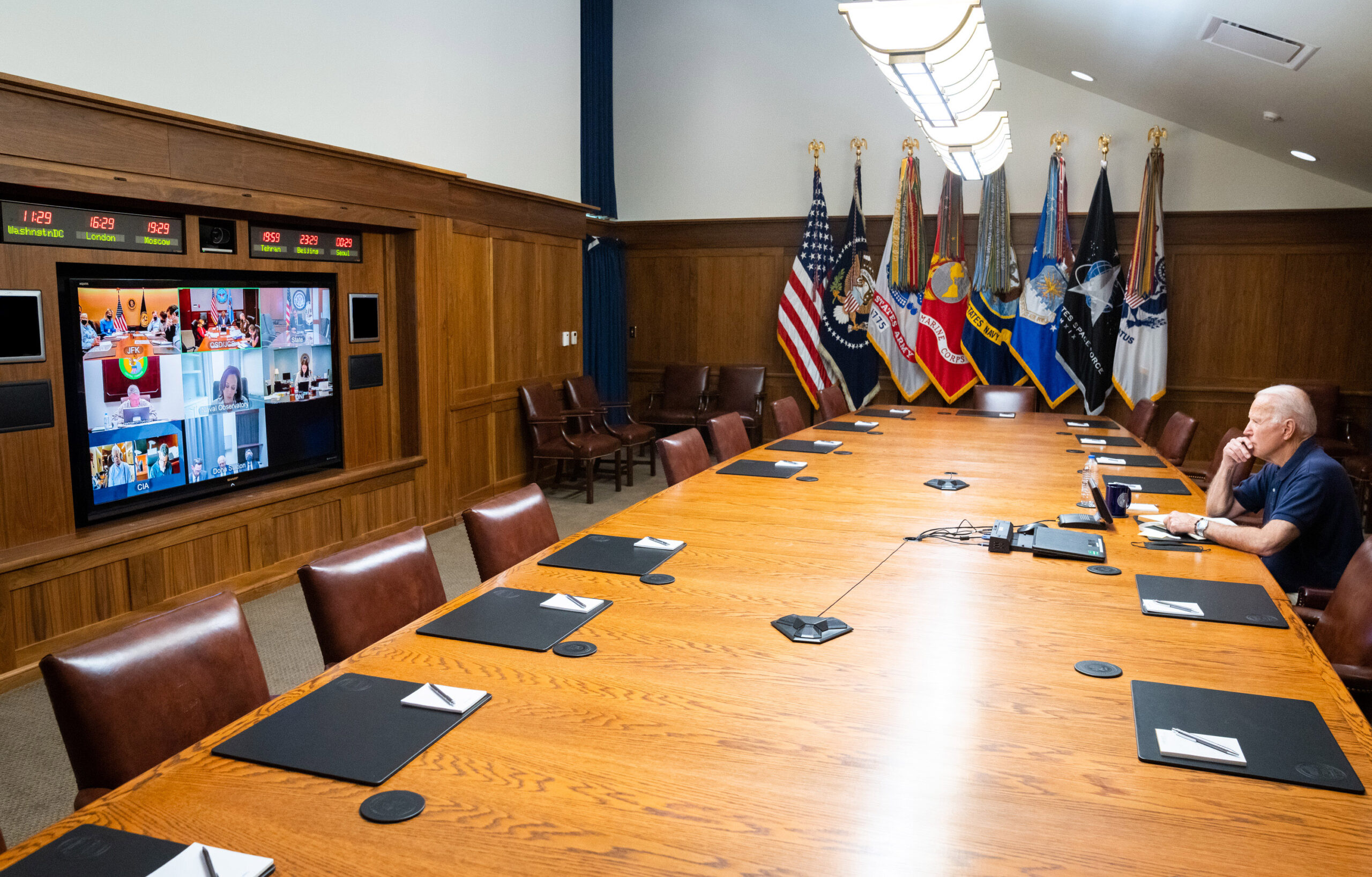 In this White House handout, U.S. President Joe Biden and Vice President Kamala Harris (on screen) hold a video conference with the national security team to discuss the ongoing efforts to draw down our civilian footprint in Afghanistan on Aug. 16, 2021, at Camp David in Frederick County, Md. Support for withdrawing troops from the country has dropped 20 points, to 49 percent, since April. (The White House via Getty Images)
By Eli Yokley

President Joe Biden looked to have a political winner on his hands when he announced in April that the United States would withdraw all U.S. ground troops from Afghanistan by the 20th anniversary of the Sept. 11 terrorist attacks.

But four months later – as the exit of American forces has preceded a resurgence of the Taliban in Afghanistan – support for his move has fallen dramatically, according to a new Morning Consult/Politico poll. Pluralities of voters say the United States should maintain a military presence there to stem the same groups President George W. Bush was trying to combat when he began the war two decades ago, and just over half of the electorate disapproves of the current president’s handling of the conflict.

The latest survey found 49 percent of voters support Biden’s decision to withdraw American forces from Afghanistan, down 20 percentage points since mid-April, while 37 percent oppose it, up by a similar amount. 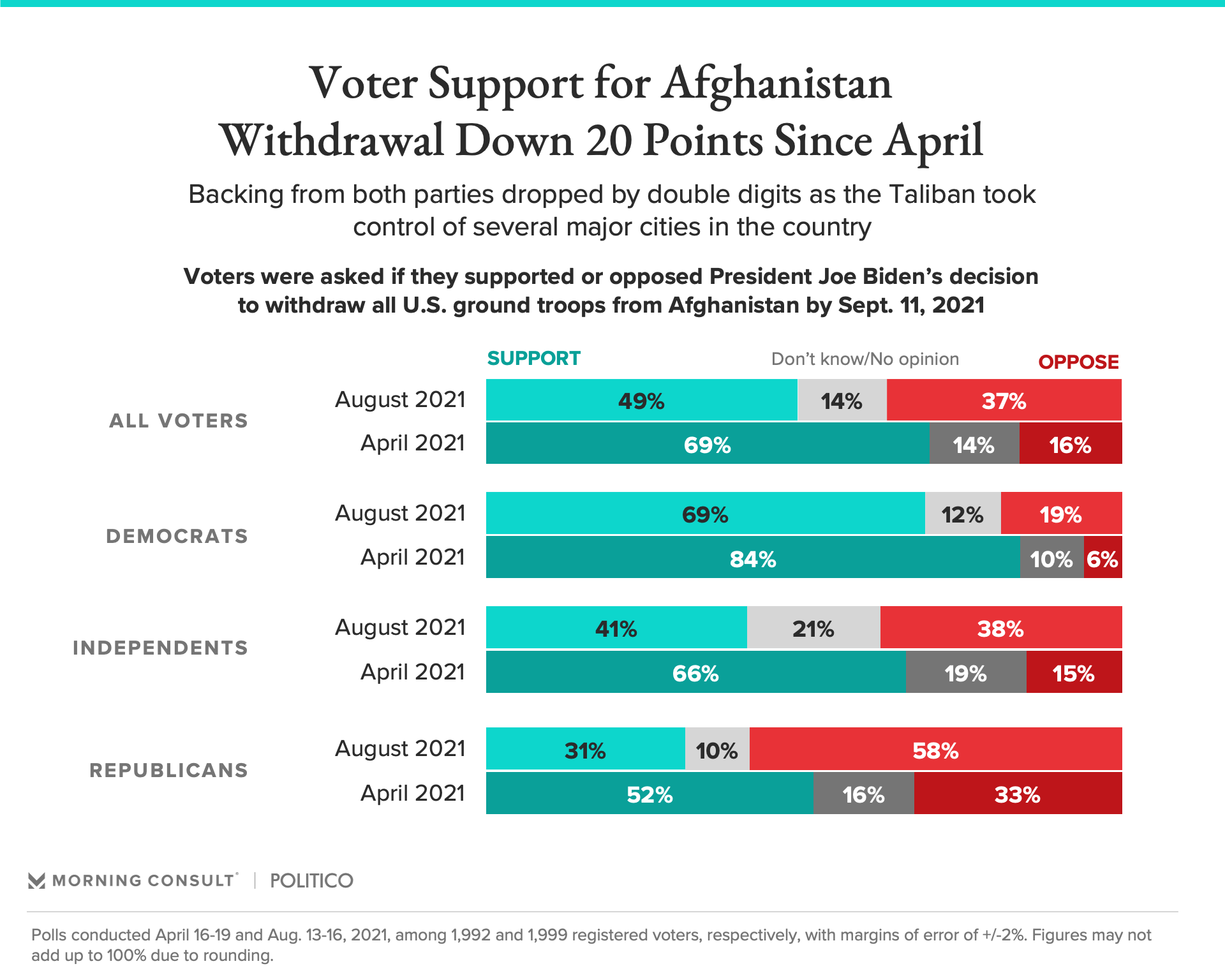 The Aug. 13-16 poll was conducted as news broke over the weekend that Taliban advances into Kabul had forced Afghanistan’s president to flee and prompted Biden to send additional troops to the country to help secure the evacuation of U.S. and allied personnel, including from the American embassy.

Just over a third of voters (36 percent) said they’d heard “a lot” about the Taliban taking control of parts of Afghanistan by the time the survey was concluded, but most seemed to be aware of the rocky American withdrawal: 57 percent of the electorate, including a 45 percent plurality of Democrats, said the exit is not going well.

In turn, Biden gets poor marks on his handling of the issue: Half of voters (51 percent) said they disapprove of how he’s dealing with Afghanistan, including a majority of independents (54 percent) and 4 in 5 Republicans.

Among Democrats, 53 percent approve of how Biden’s handling Afghanistan, far out of line with his average intraparty issue approval, which usually hovers between 70 and 80 percent.

While Biden has been adamant about continuing the troop withdrawal — saying in a statement that he “would not, and will not, pass this war onto a fifth” president — pluralities of voters believe the United States should maintain forces in the country in order to stem the rise of the Taliban or terrorist groups. 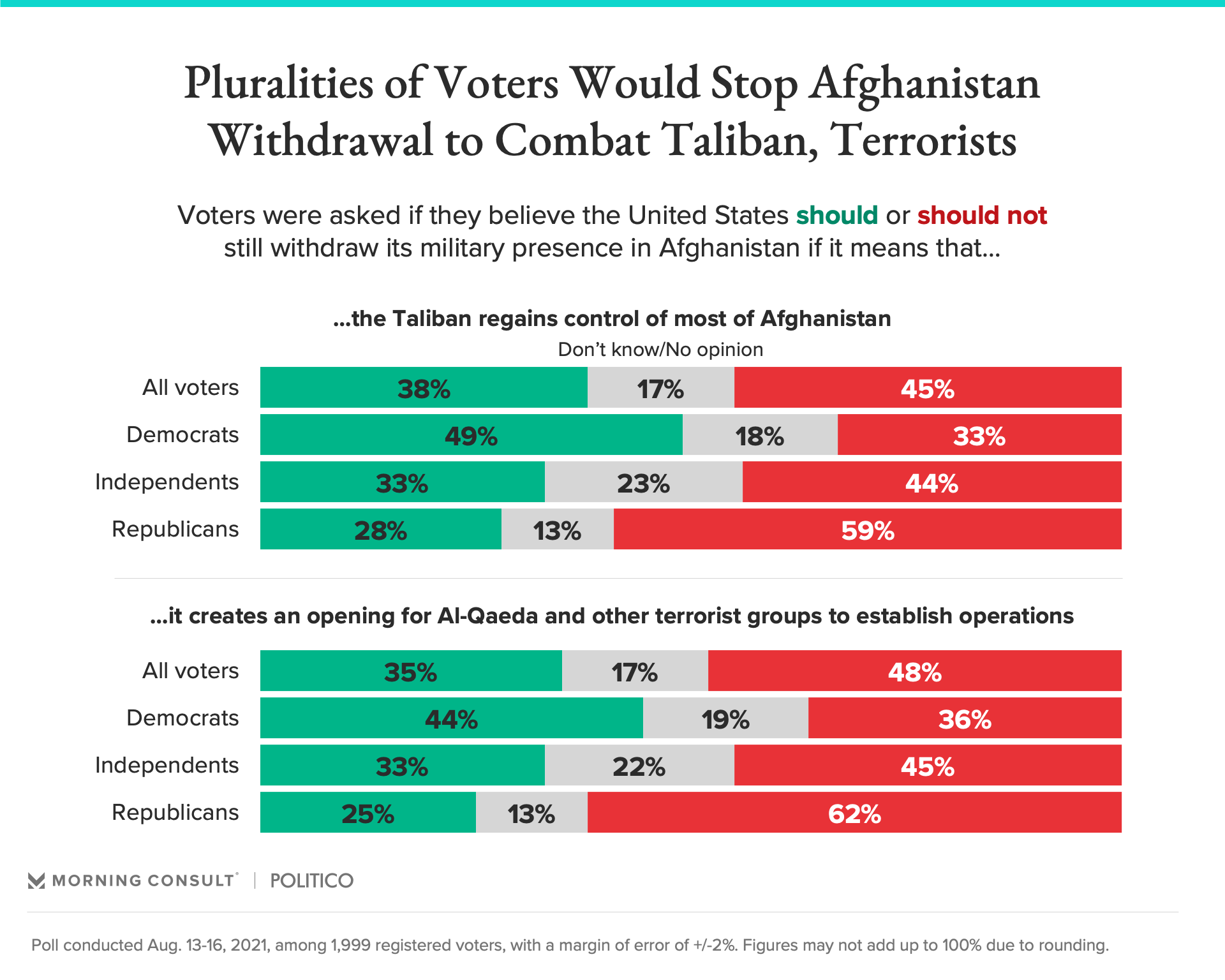 Forty-five percent of voters said they believe the United States should not withdraw its military presence in Afghanistan if it means the Taliban regains control of most of the country, similar to the share who say the same if the move were to create an opening for the rise of al-Qaida and other terrorist organizations.