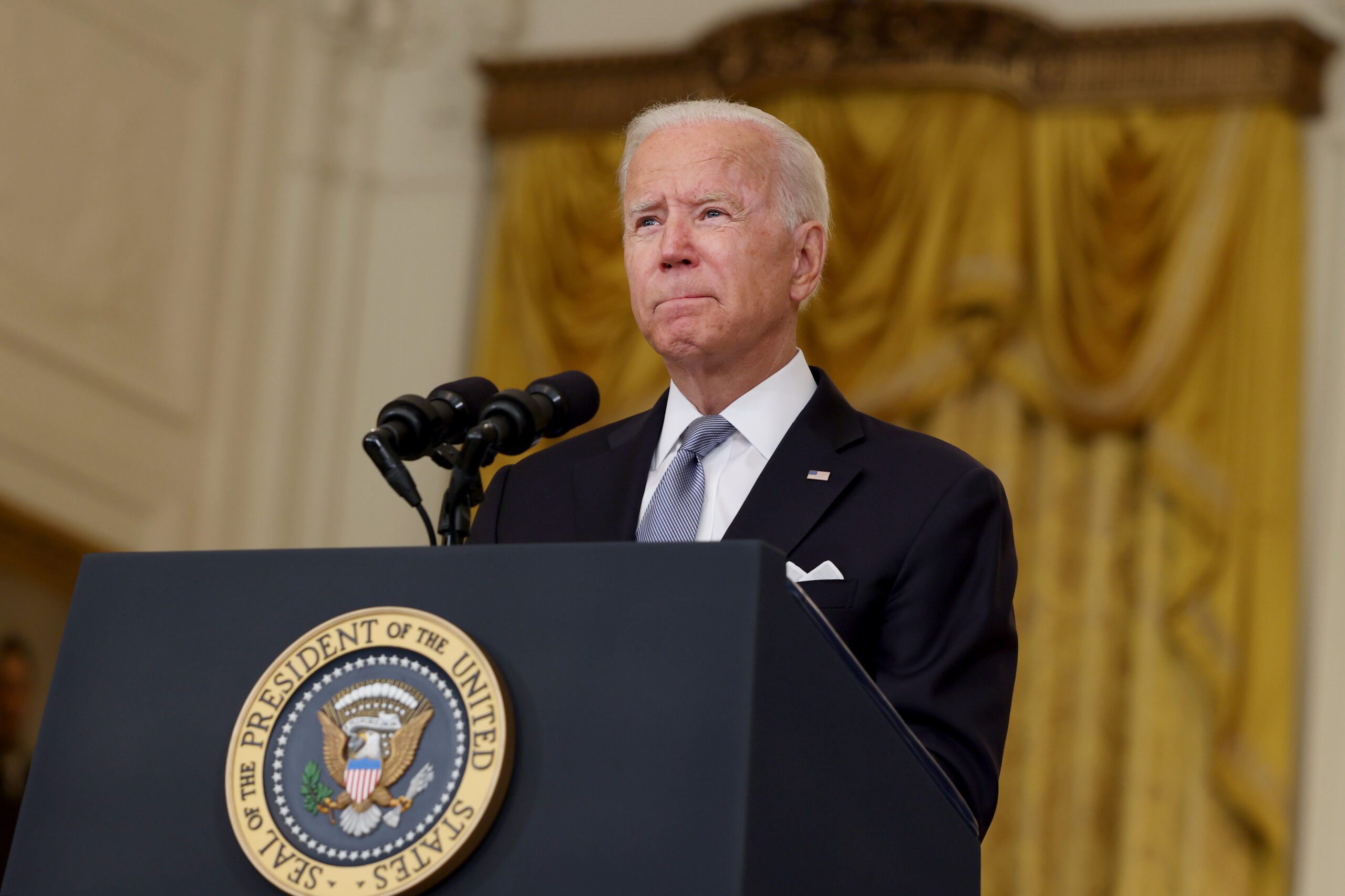 President Joe Biden pauses while giving remarks on the worsening crisis in Afghanistan from the East Room of the White House on Aug. 16, 2021 in Washington, D.C. New polling shows that 43 percent of voters say the president bears "a great deal of responsibility" for the current situation in Afghanistan. (Anna Moneymaker/Getty Images)
By Eli Yokley

When President Joe Biden first spoke about the collapse of the Afghan government as pictures of chaos emerged from the streets of Kabul, he struck a defensive tone – acknowledging surprise at the speed in which the country’s capital fell but blaming the Afghans and, in part, a deal struck by former President Donald Trump, for the frenzy.

Most voters share Biden’s view that those in Afghanistan are to blame for the current situation there, but a new Morning Consult survey conducted found that among domestic entities, voters are most likely to hold him responsible for the unfolding crisis as America continues its largely popular effort to end its longest war.

The largest share of voters (65 percent), including majorities of both parties, said the Taliban has “a great deal” of responsibility for the current situation in Afghanistan. That’s nearly twice the share who blame the United States (34 percent) amid its withdrawal, and only slightly more than the 59 percent who blame the Afghan government and the 54 percent who blame the country’s military. 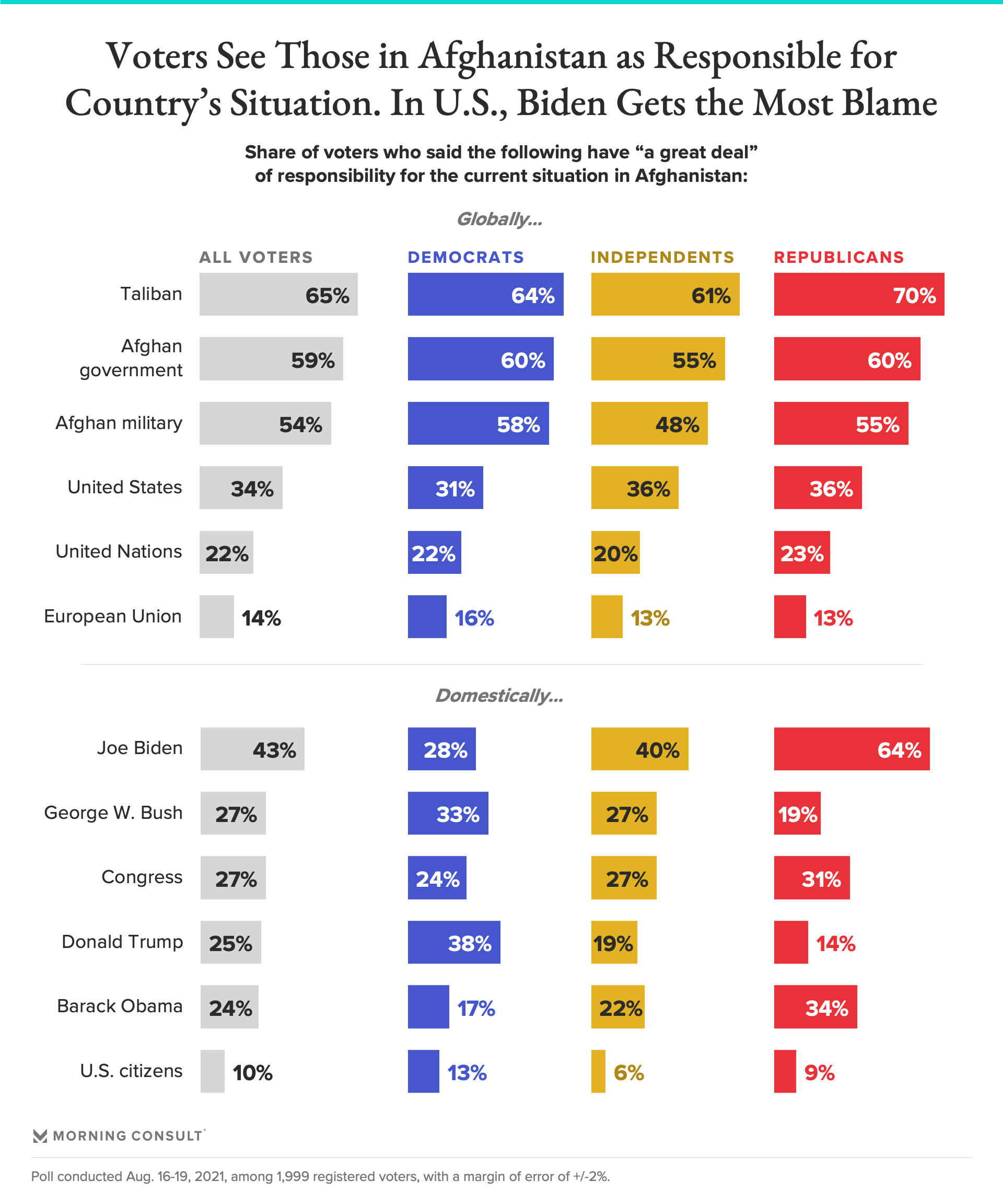 The Aug. 16-19 survey was conducted after Biden returned from Camp David to address the nation, calling the U.S. withdrawal “far from perfect.” But before taking responsibility for the circumstances and saying “the buck stops with me,” he pointed to Trump’s drawdown agreement with the Taliban as a reason for the American exit. Polling shows voters aren’t buying that the 45th president is to blame for the situation unfolding on the 46th president’s watch.

Forty-three percent say Biden bears a great deal of responsibility for the current situation in Afghanistan, compared with 25 percent who said the same of Trump – largely in line with the shares who said the same of former President George W. Bush, who first invaded Afghanistan after the Sept. 11, 2001 terrorist attacks, and former President Barack Obama, who continued the fight.

But there is some good news for the beleaguered president: After a Morning Consult/Politico survey conducted over the weekend found a double-digit decline in support for Biden’s withdrawal, the events of the past week appear to have found him some new backing. 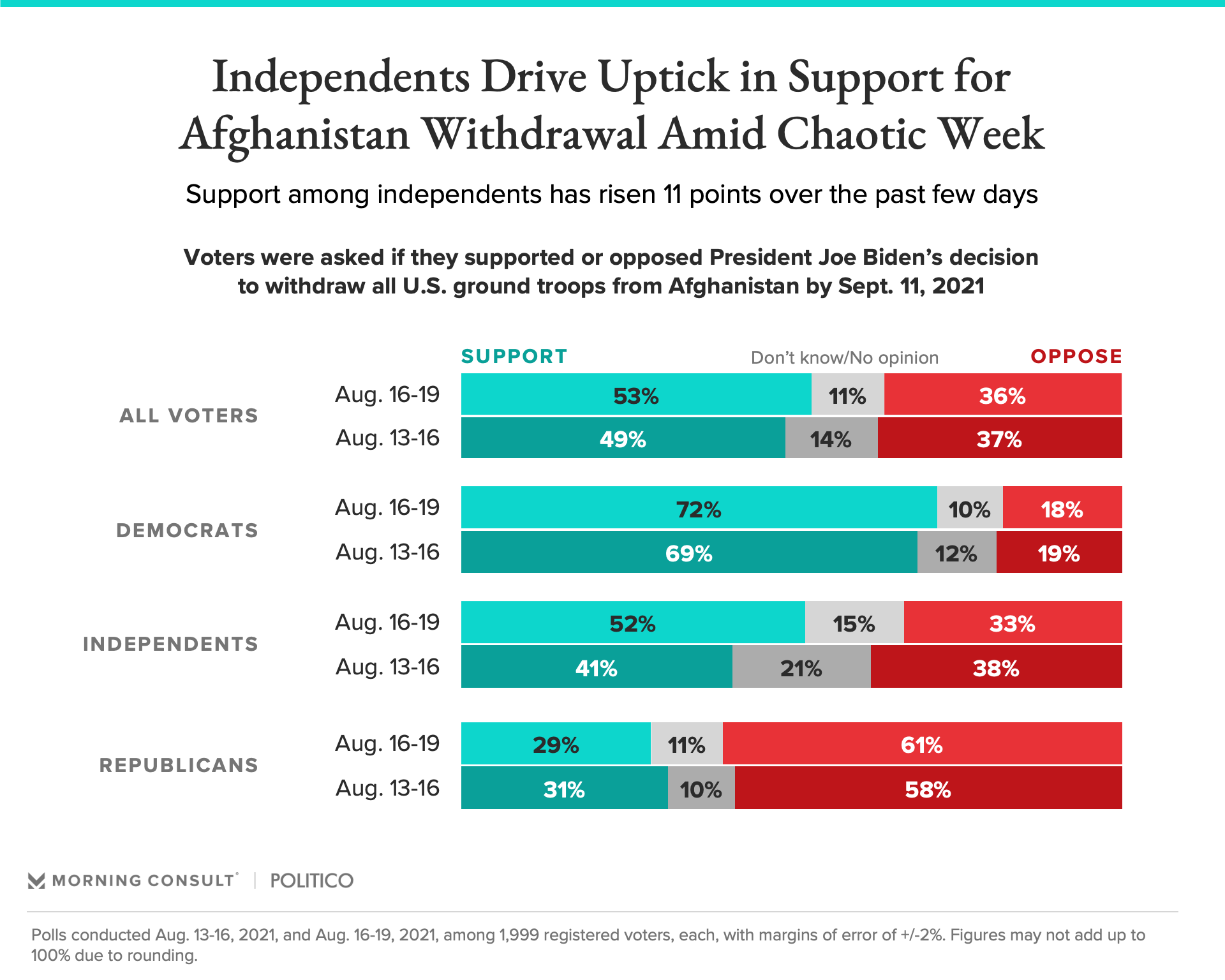 Among the overall electorate, 2 in 5 said they’d seen, read or heard “a lot” about Taliban fighters taking control of Kabul, and slightly more heard the same about thousands of Afghans rushing to the airport in Kabul in an attempt to leave Afghanistan.

That chaos – which Biden said in a Wednesday interview with ABC News had always been priced into his decision to withdraw – prompted the president to send more troops to Afghanistan to help with the evacuation of American and Afghan personnel, a move supported by 69 percent of voters, including a large share of Republicans. But when it comes to U.S. involvement in the situation on the ground, the electorate does not appear interested in going further. 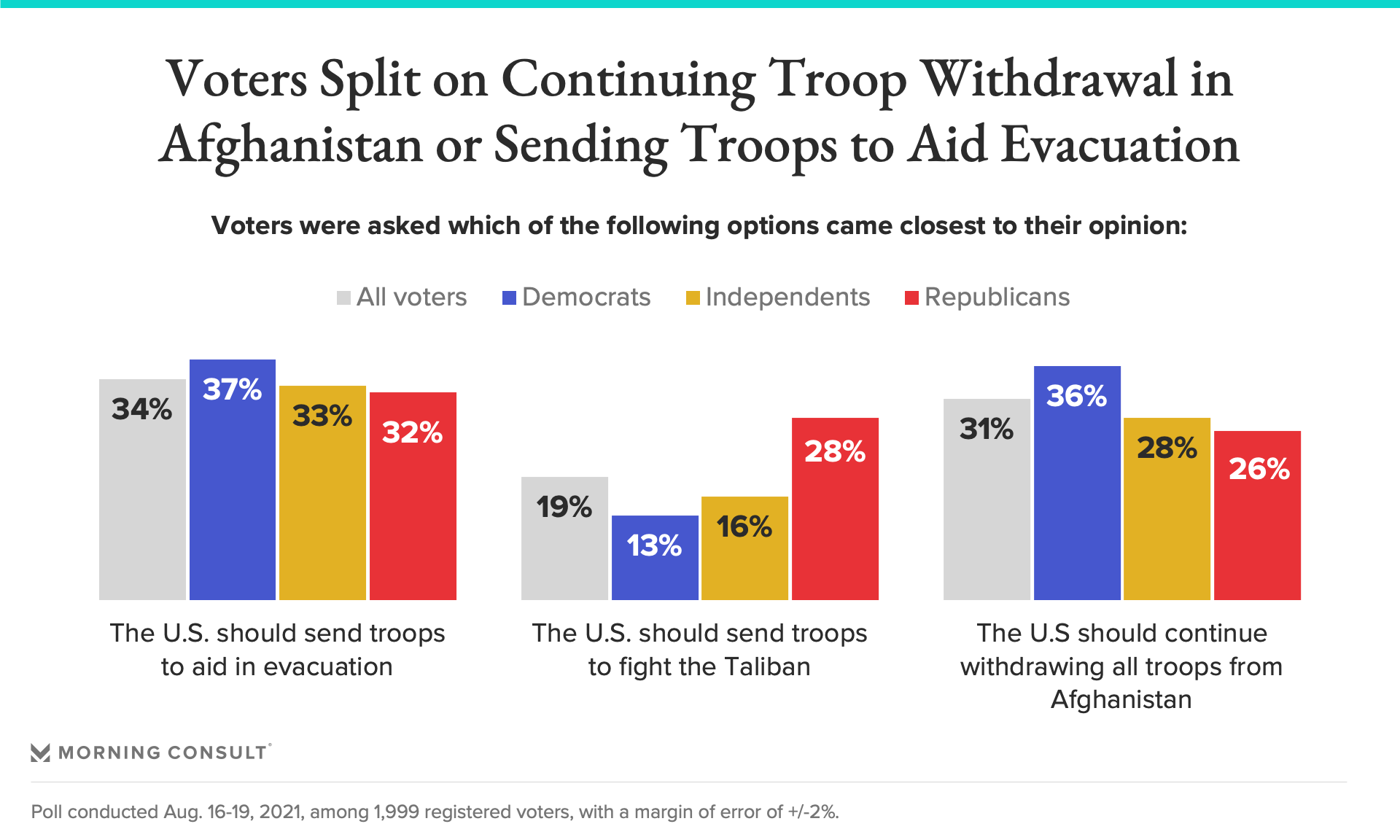 Larger splits emerged between the two parties when asked what to do with all of the Afghans trying to flee their country – an issue that has split the GOP between a group aligned with Trump that is pushing anti-refugee rhetoric and some conservative officials who have suggested the would-be émigrés should be welcomed with open arms. 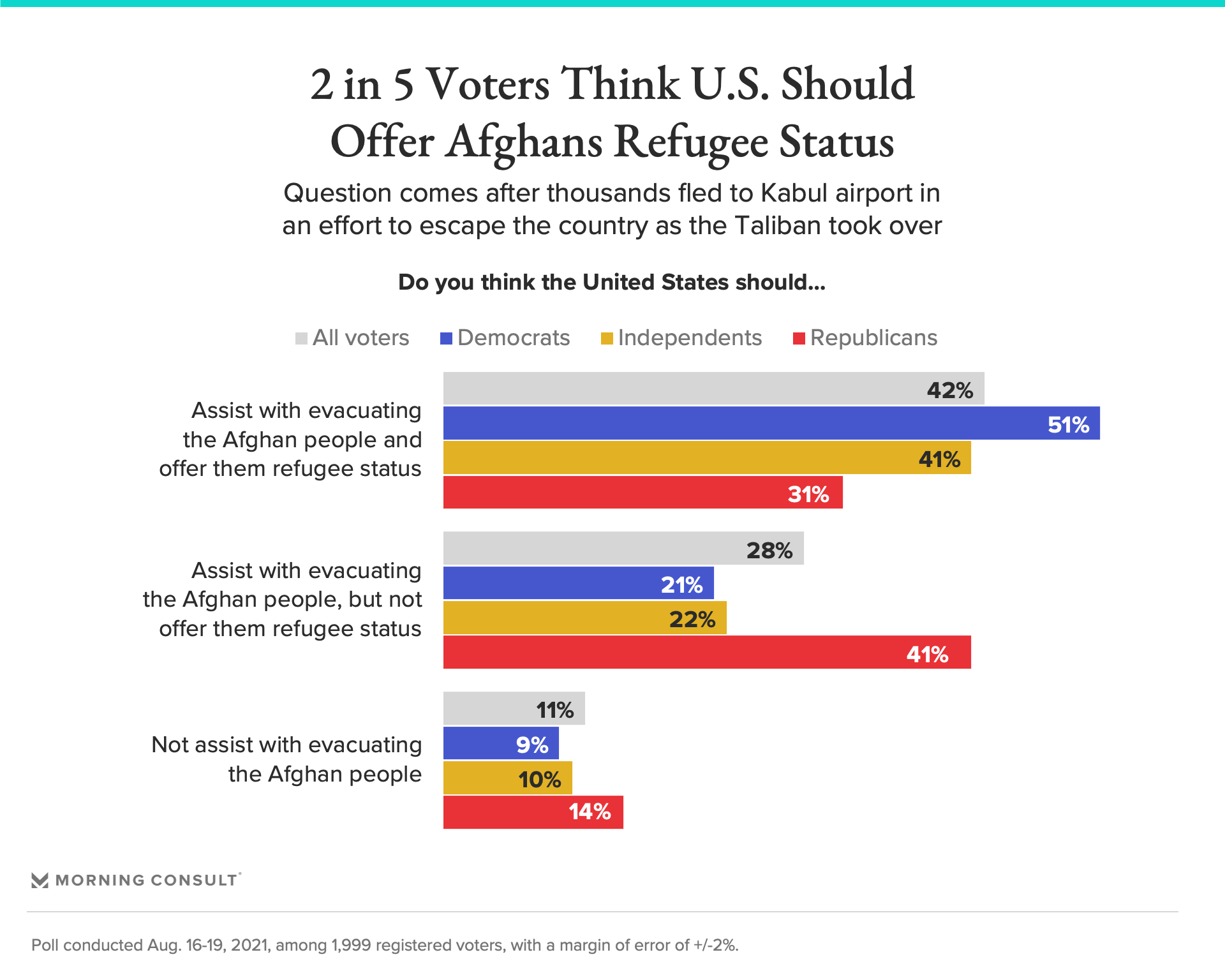 That sentiment about offering refuge comes as voters of all stripes see the risen Taliban as a “major threat” to the lives of Afghans. 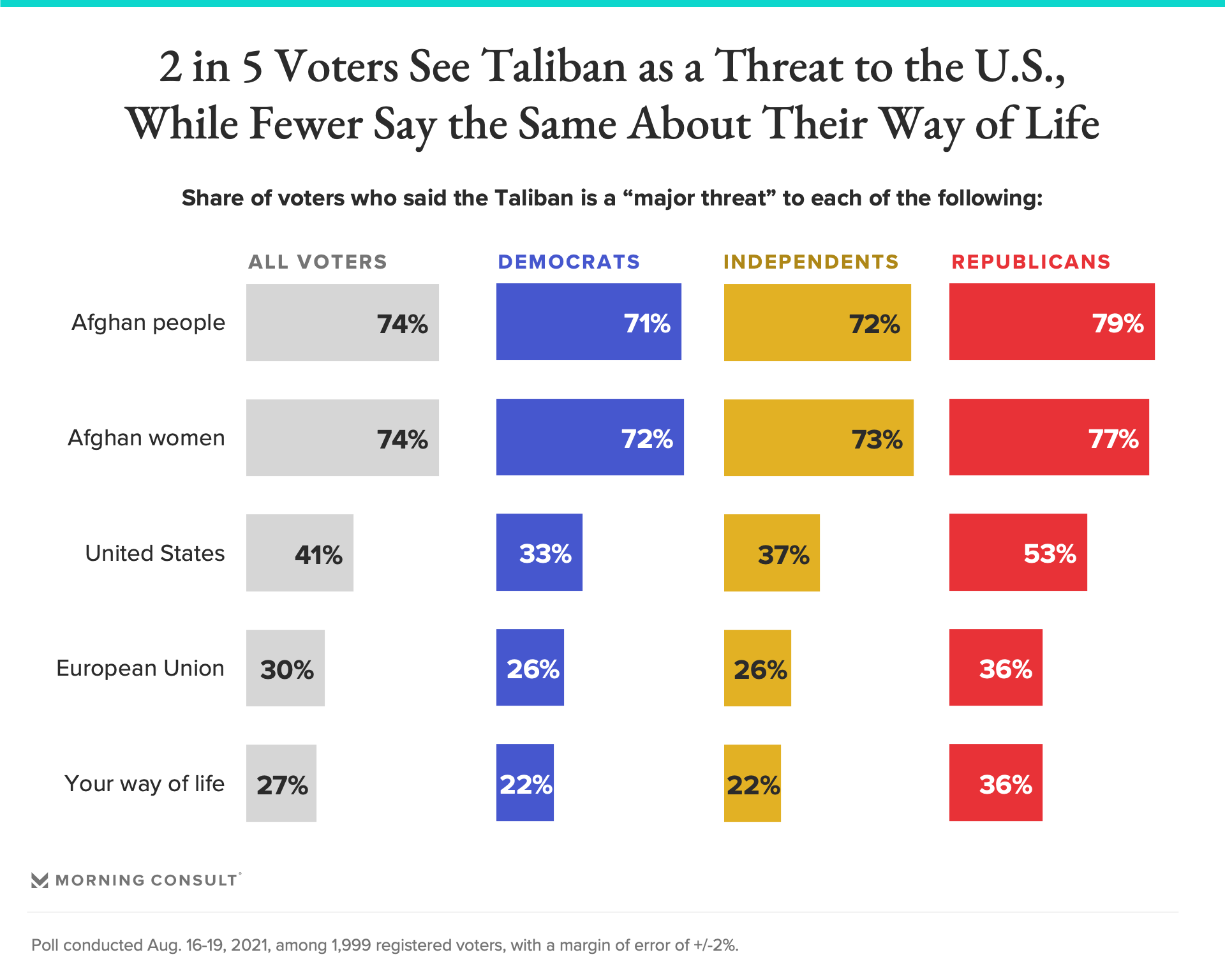 About 3 in 4 voters (74 percent) said the Taliban represents a “major threat” to the Afghan people, while the same share said the group poses a major threat to Afghan women, who faced violence and oppression under the group’s previous rule.

Far fewer voters (41 percent) see the Taliban as a major threat to the United States, and just over a quarter (27 percent) see it as a serious threat to their own way of life amid concerns that its rule could foster the growth of the same terrorist elements that brought Americans there in the first place two decades ago.