The internet was supposed to make TV ads better, but the vast majority of consumers are still bothered by the advertising experience on streaming services 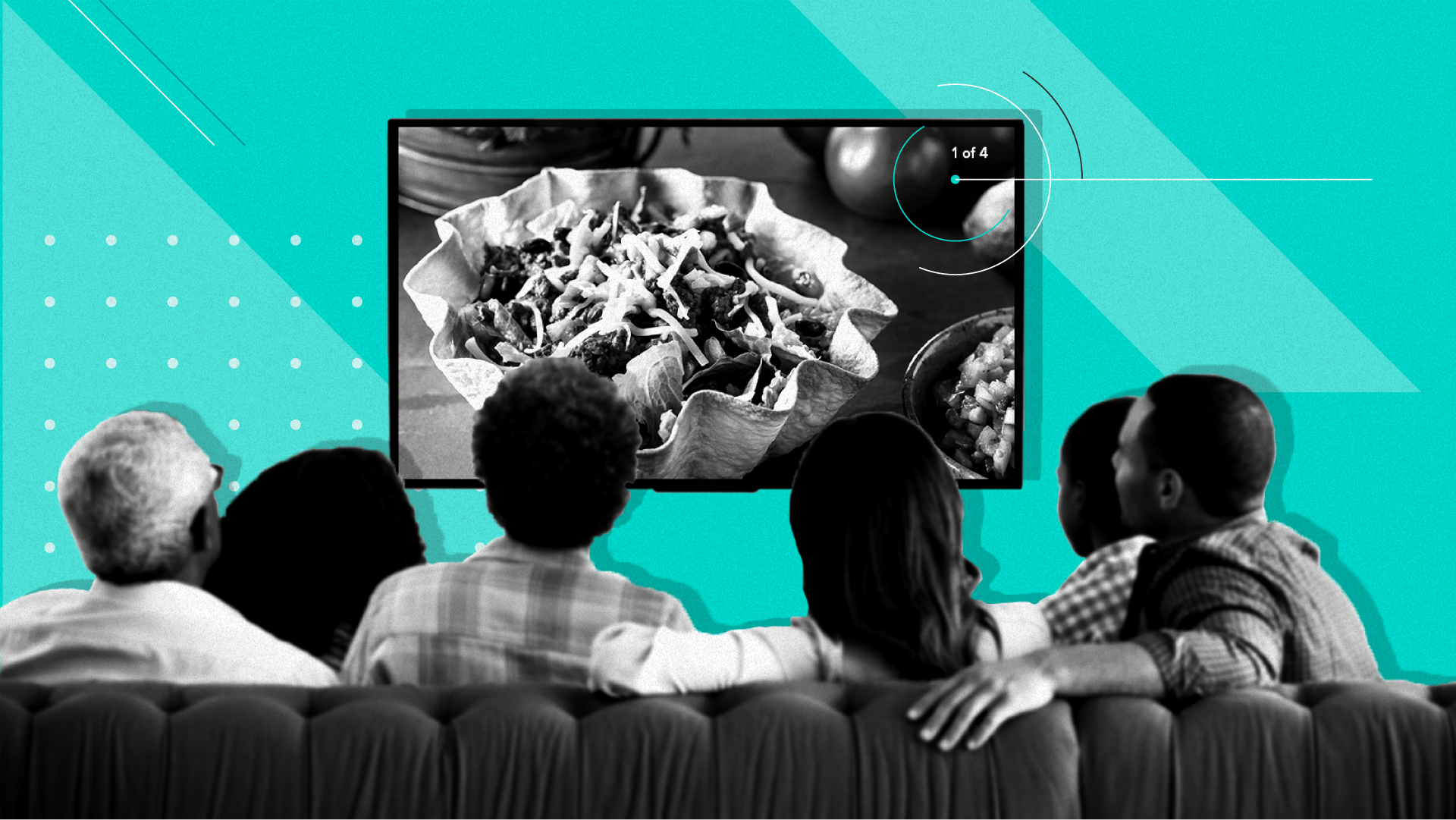 Roughly 4 in 5 consumers say they are bothered by the number of ads and how often they’re replayed on streaming platforms, according to a new Morning Consult poll. (Getty Images / Morning Consult artwork by Ashley Berry)
By Sarah Shevenock & Alyssa Meyers

At first glance, streaming television looks like it solves many of the problems that have for years plagued traditional TV. Viewers can watch what they want, at whatever time they want, at their own pace, and on their devices of choice. But that enhanced experience has created issues of its own.

You’ve probably dealt with it: You’re watching a show on a streaming service and get the same ad three times in a row. Or you see an ad that seems to know exactly who you are or where you live. The streaming ad experience might be better than the one on traditional TV, but it still needs a lot of work. Consumers have noticed.

A plurality of U.S. adults (44 percent) said there are too many ads on streaming services, while 69 percent said they’re repetitive and 64 percent think they’re invasive, according to a new survey from Morning Consult. Roughly 4 in 5 consumers (79 percent) are bothered by the number of ads and how often they’re replayed on streaming platforms.

Annoyance with ads may have reached a peak in the last 18 months as the use of streaming services and connected TVs boomed in American households during the coronavirus pandemic. And as time spent on these platforms increased, so did demand for streaming advertisements.

That market is only going to continue to heat up, making it even more imperative that the industry addresses consumers’ growing concerns over what is quickly becoming the predominant method of entertainment consumption.

Streaming services, TV manufacturers and ad tech companies have all begun to address these issues, according to interviews with executives, but they face several obstacles, including how streaming ads are bought and sold.

Another one? Streamers, advertisers work to address ad repetition

Advertisers can buy commercial slots directly from streaming services such as the Walt Disney Co.’s Hulu or NBCUniversal’s Peacock — or, alternatively, from the companies that manufacture connected TVs such as Vizio Inc. These companies each have their own ways of measuring viewership and targeting ads, and that fragmentation makes it difficult to avoid repetition.

Ad tech companies provide some assistance by playing middleman between streaming services and advertisers, allowing the latter to buy ads more easily across platforms. But not every brand has an ad tech partner, and even they can’t solve for lack of measurement standardization on their own.

“This is by far the biggest problem facing the industry,” said Tal Chalozin, chief technology officer and co-founder of connected TV (CTV) advertising technology company Innovid, which served as NBC’s official ad management partner for the recent Tokyo Olympics. “Seeing the same ad over and over again leads to a diminishing return at some point. Everyone should be bothered by it.”

Frequency capping, or placing a limit on how many times a household sees a specific advertisement, is one common solution for repetitive ads, according to Jon Tabak, general manager of strategic partnerships at global ad tech company The Trade Desk. Advertisers are also able to look across different platforms to make sure consumers aren’t being followed around and bombarded by the same ads, he said.

Frequency capping isn’t foolproof, however. Repetition often occurs when ad spots are bought through multiple vendors, like when broadcasters sell directly to brands instead of through one platform, Tabak said. The Trade Desk is helping to remedy this by offering a centralized platform that can allow advertisers to see how frequently ads are being shown.

CTV ad spending is expected to reach $18.29 billion by 2024, more than double the amount spent in 2020, according to eMarketer, but the lack of standardization in the industry is already frustrating viewers. Some CTV makers, since they have control over the devices viewers use to stream across services, have come up with their own methods to limit ad repetition.

Related: Podcast Companies Are Betting on Advertising Technology to Boost Business, but Some Remain Hesitant

Streaming services and ad tech companies on their own can’t do the same, he said, because they don’t own the hardware.

“What we tell advertisers is that we believe it’s the wisest approach to go direct to device,” Hockersmith said. “If an advertiser wants to piece together a buy at linear TV-like scale and control for frequency, we believe they’re best off going to the device manufacturers.”

Chalozin added that rotating through different creative versions of the same ad can also give consumers a break and motivate them to engage more. This, however, is not yet the norm in the industry.

“The problem is that for many marketers, they just don’t have multiple versions,” he said. “A lot more marketers are now understanding that you can do things like that.”

But there are other issues. Bryon Schafer, senior vice president of research at music video streaming service Vevo, said the problem is also tied to outdated ideology around CPMs — or cost per thousand impressions, the industry’s most important metric.

For many ad buyers, it’s “more palatable” to hit viewership goals by purchasing many ad placements at low CPMs, even if that means they’re ultimately reaching fewer people on fewer platforms, he said.

“The CPM is misleading,” Schafer said. The common thinking is that low CPMs are always better, “but that means more frequency and not the unique reach that you get with a more diversified media plan.”

Streaming services already offer a lighter ad load than linear TV — four to eight minutes per hour, compared to 17 on traditional television. Still, 44 percent of consumers said there are too many ads on streaming services in the September poll. Companies can’t advertise much less than they already are without losing money, but there are ways to make ads seem more palatable without reducing them in frequency.

To bother viewers less, streaming services are starting to move away from the traditional block of commercials and experiment with ad breaks, interactive ad formats and other new models enabled by the internet.

HBO Max, for example, introduced brand blocks, or blocks of content sponsored by a marketer that result in a reduced commercial experience for the viewer. Other services, including Peacock, have tried “binge ads,” which reward audiences with a commercial-free episode, brought to them by a brand.

Respondents were asked which of the following ad formats they most prefer:

Presented with options of new ad formats, 16 percent of those surveyed said they most prefer binge ads during their streaming experience, while 12 percent said the same of home screen ads. Interactive ads were least preferred among viewers.

Tubi, the free, ad-supported streaming service owned by Fox Corp., shows its viewers only three to five minutes of ads per hour. Stefan Lucyshyn, Tubi’s vice president of ad products, said “those advertising formats obviously perform really well, especially on a large television screen,” but noted the company is working with clients in search of different ways to reach viewers.

Like HBO Max, Tubi is also experimenting with sponsorship opportunities built around a certain content block. Lucyshyn said the company is wrapping tests on this format and plans to roll it out through the holiday season.

Viewers are also bothered by ads that lack relevance to them. Roughly half (51 percent) of Americans said they’re annoyed by irrelevant ads, a share that was consistent across generations. 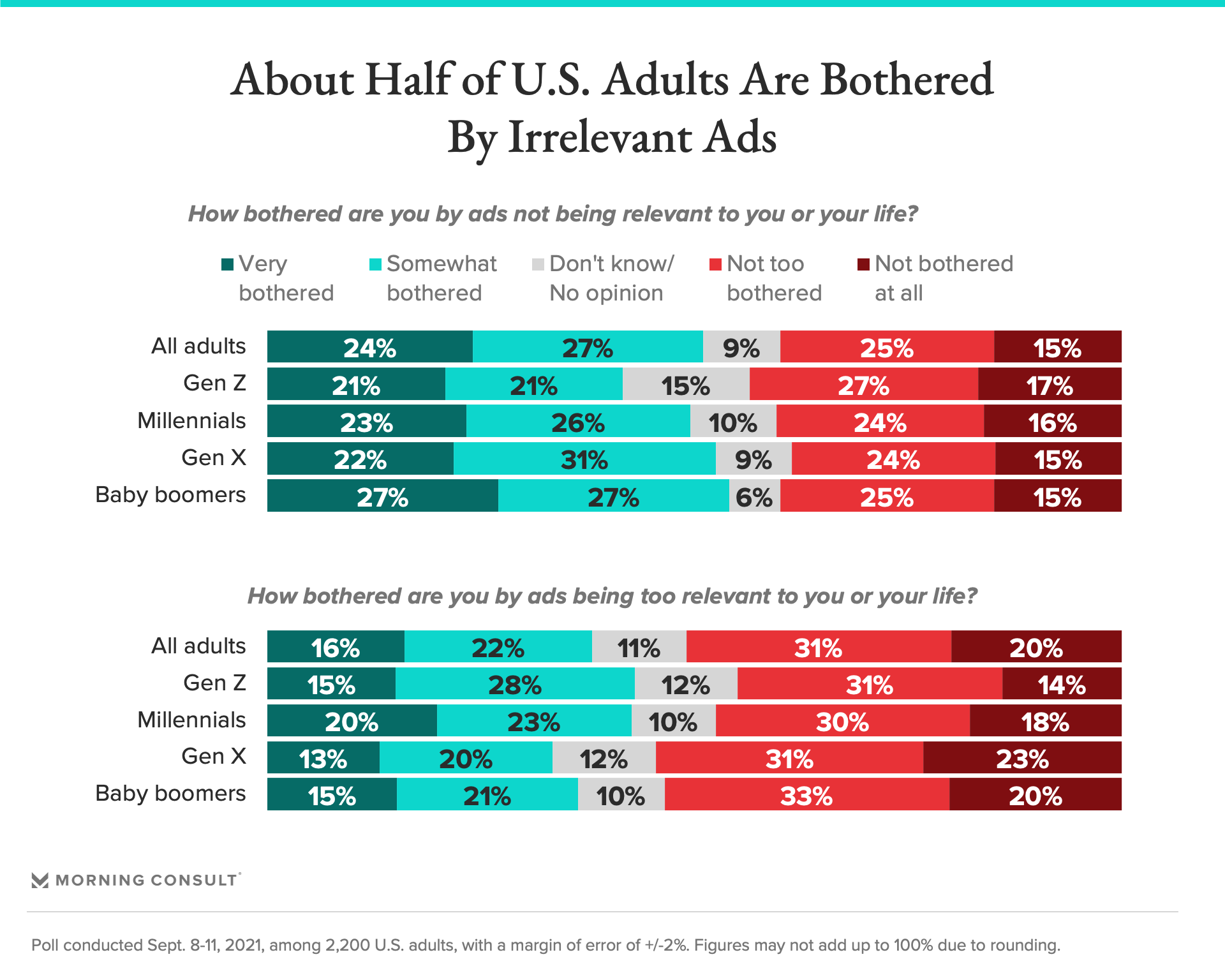 While fragmentation in the streaming space largely leads to replica ads, the environment is better for targeting than that of linear TV. Media buyers and sellers initially struggled to shift away from using the same strategies they leveraged on linear TV, ad tech experts said, and some are still learning the ins and outs of buying based on more specific audience categories.

“Traditionally, buying TV shows was seen as a proxy for buying a certain audience,” The Trade Desk’s Tabak said. “That’s when you run into the trouble of a lot of stuff being irrelevant.”

The good news for advertisers is viewers see targeted ads in a fairly positive light, relative to other aspects of advertising: 57 percent agreed that targeted ads are “informative,” while half said that the term “helpful” describes them well.

Consumers Find Targeted Ads Roughly as Creepy as They Are Helpful

The bad news is an even larger share said that targeted ads are invasive (64 percent), and about half (52 percent) said they’re creepy. The data indicates that while people want to see ads for goods and services they might actually use, they’re simultaneously put off by that idea: the paradox of targeting.

“People don’t hate advertising,” said Eric John, vice president of the Interactive Advertising Bureau’s Media Center, which recently published a guide for best practices for CTV advertising. “They hate irrelevant advertising, and they hate it when they feel like the ad knows too much.”

In reality, streaming companies don’t know as much about their viewers as one might think, said Innovid’s Chalozin. “People think that media is either targeted or not targeted, and personalized or not personalized, but there’s a spectrum,” he said. Navigating that spectrum could help media companies and their advertisers strike a balance between reaching the right audience with the right message, while respecting viewers’ privacy concerns.

“It can be a fine line between what people find creepy and what they find valuable,” said Oz Etzioni, chief executive of ad tech company Clinch.

Etzioni said that’s why his company focuses heavily on relevancy, using anonymous data to determine how people react to certain ads. For instance, if Clinch is working on a campaign for an automotive company, they’ll use data to understand which attributes consumers might value most in a car, such as comfort and safety.

That approach, he said, makes an ad relevant as opposed to invasive.

“Personalization can be taken in different perspectives, but it’s not about putting someone’s name in the ad or addressing something that’s really personal to them,” Etzioni said. “It’s about providing value.”

And despite concern over targeting, consumers aren’t as worried about ads on CTV as they are about ads on other digital platforms such as social media:

Shares of respondents who said they find targeting ads on the following platforms “very” or “somewhat” invasive:

Still, streaming and ad tech executives agree that something must change with how ads across platforms are placed and targeted, in order to make the experience more valuable for all parties.

“The industry as a whole needs to do a better job about being open about what it means to participate in targeted advertising,” Tabak said.

As advertisers and streaming services continue to build trust with audiences, they’ll see returns in the form of increased engagement, which in turn leads to greater opportunities for data collection.

“These audiences are willing to engage in ad-supported experiences,” John said. “The growth of the free, ad-supported environment where you get quality content, and you have to watch ads indicates that people are willing to spend time with ads for the right value exchange.”