Why Vermont’s Phil Scott, the Country’s Most Popular Governor, May Be Resisting the GOP’s Calls to the Senate

Vermont Gov. Phil Scott (R) speaks during the NASCAR Hall of Fame induction ceremony in Charlotte, N.C., in January 2018. Scott has been the country's most popular governor throughout 2021, according to Morning Consult's state-level polling, but that doesn't mean a Senate candidacy would be a slam dunk. (Streeter Lecka/Getty Images)
By Eli Yokley

Republican Phil Scott of Vermont has been America’s most popular governor throughout 2021, a fact that is not lost on his party’s strategists, who are hoping to lure him into the open race to replace retiring Democratic Sen. Patrick Leahy in next year’s midterm elections.

But Scott has insisted he will not heed their calls, and given Vermont’s lack of term limits, it’s hard to see anyone uprooting him from his perch in Montpelier if he runs for re-election. 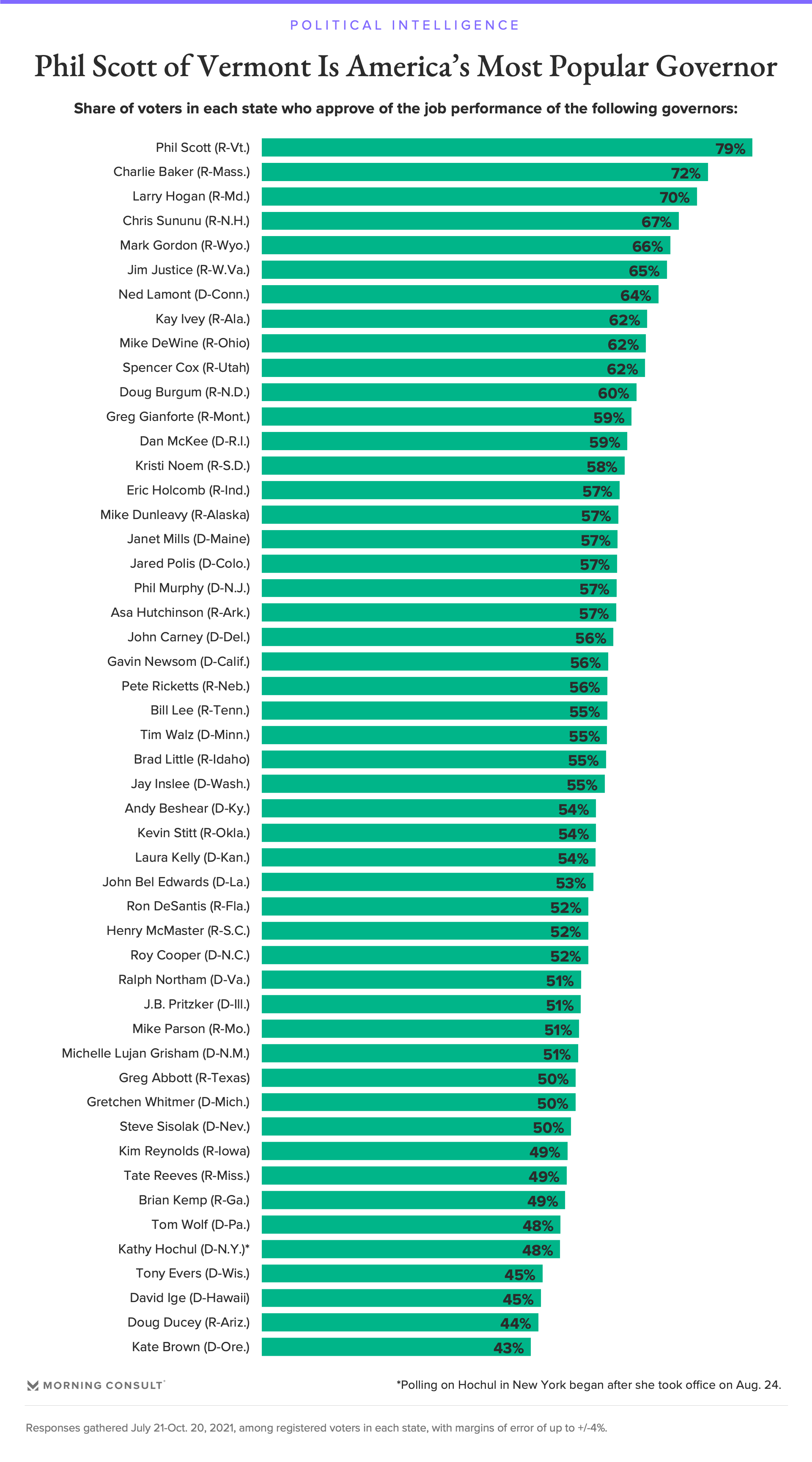 How Scott stacks up against other governors

Scott spokesman Jason Maulucci told Morning Consult the governor “has been clear that he will not be running for the U.S. Senate in 2022, and that has not changed” — even if Senate Republican strategists in Washington are still hoping for his candidacy.

However, Senate contests, due largely to the issue sets that imbue them, are vastly different from gubernatorial races. Just because constituents like someone as a governor doesn’t mean they want that person as a senator, especially if their party at the national level is broadly toxic in the eyes of those voters.

In Montana last year, for example, term-limited Democratic Gov. Steve Bullock was still popular in his own right after he had spent eight years advocating for public lands, Medicaid expansion and campaign finance reform. But Republican Sen. Steve Daines nonetheless defeated him by 10 percentage points — only a slightly smaller margin than Biden’s 16-point loss to President Donald Trump in the state.

Vermont’s an even tougher state for Republicans than Montana was for Democrats, and Morning Consult’s state-level polling shows just how much Scott, given the core of his support, would need to outperform the national environment in order to book a ticket to Washington.

Vermont voters were asked whether they approve or disapprove of the job performance of Republican Gov. Phil Scott

The Vermont polling was conducted July 21-Oct. 20, 2021, among 985 registered voters, with a margin of error of plus or minus 3 percentage points.