Economists Say 2022 Is the Year of Inflation. Can the Public and Policymakers Get on the Same Page?

From politics to markets, there’s an expectation from economists that inflation will continue to echo throughout the country next year 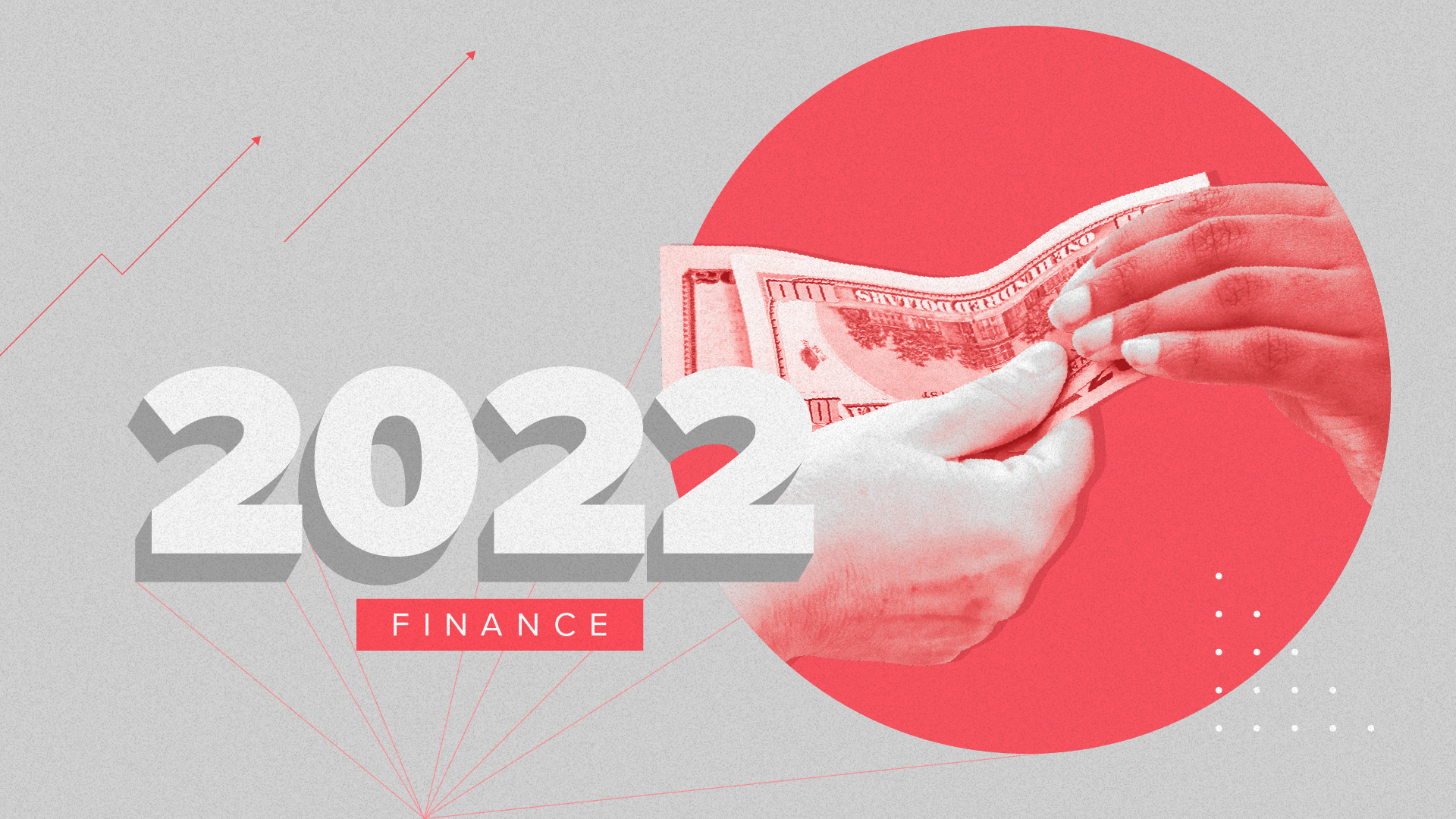 The I-word’s grip on the fears of the American public is tightening once again, reminiscent of when future presidential candidate Ronald Reagan called it “violent as a mugger, as frightening as an armed robber and as deadly as a hit man” in 1978.

Luckily for President Joe Biden, it’s not the 1970s and he’s not Jimmy Carter. Still, the lesson of inflation of that era rings clear in today’s economy and political arena: Americans really don’t like paying more, and they’ll make that known to both politicians and economic policymakers in 2022.

“People have a visceral reaction to inflation,” said Jonathan Kirshner, a political science professor at Boston College who’s written about the financial crisis. “People see prices rise in a way that affects them immediately, which has an important psychological aspect that transcends the specific economic costs.”

During the pandemic, Washington has consistently underestimated rising prices and their impact on consumers. Biden has argued that the economy isn’t doing half bad, especially after the pandemic largely choked off economic growth nearly two years ago. Even after inflation recently increased at its quickest pace since 1982, Biden still painted a largely optimistic picture, saying he believes prices have reached their peak.

Polling paints a darker picture of the economy. The U.S. public has shown rising anxiety about inflation for months, flashing warning signs to economic policymakers. And Democratic voters increasingly blame Biden’s policies for rising prices, a sharp turn in public opinion that once lauded the president’s economic stimulus payments and spending measures.

Looking ahead to 2022, with supply chain issues persisting and a new variant of COVID-19 disrupting everyday life, the White House and Americans will have to reconcile these two realities.

A White House official highlighted Biden’s efforts around supply chains, as well as some economists’ expectations that inflation will “substantially moderate next year,” in addition to pointing to Wednesday’s Conference Board data, which showed that U.S. consumer confidence improved by much more than expected in the month of December.

“We know that any price increase, at the grocery store or at the gas pump, can make a difference for families, and that is why the president has taken aggressive action to bring down prices and alleviate bottlenecks – and we are seeing results,” the official said.

The Federal Reserve’s plan to pencil in interest rate increases and reel back its massive bond-buying program is the biggest move by the U.S. government so far to tackle inflation head-on.

Still, Chairman Jerome Powell insisted for months that inflation was “transitory,” and even in the central bank’s December announcement, the Fed attributed increased prices to “supply and demand imbalances related to the pandemic and the reopening of the economy.”

Trust in the Fed among the general public has fallen over the course of 2021, most notably around March as inflation started to rise. 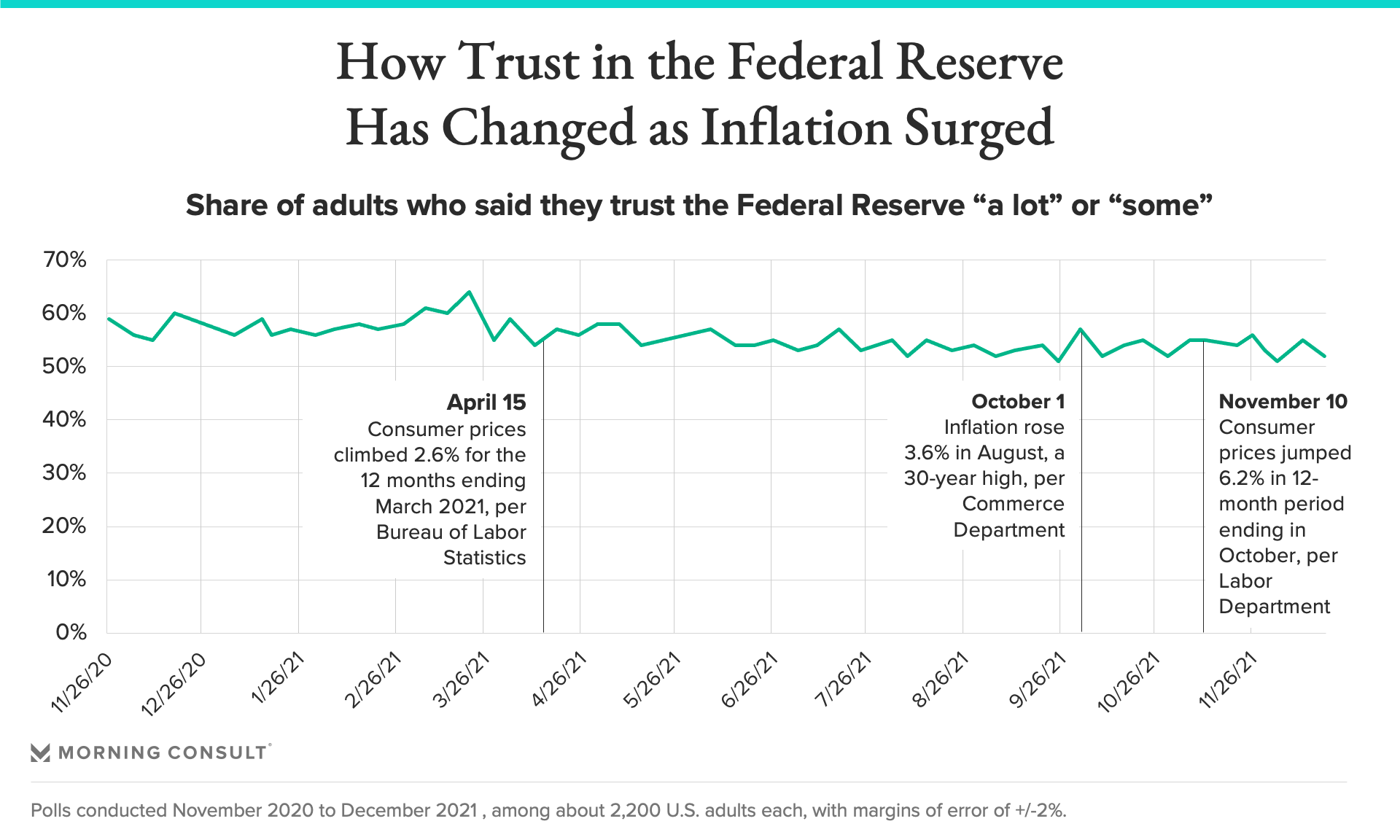 Experts note that public opinion on the Fed and on politicians reflect how people feel about the economy generally – and the state and future of their own finances – not on how they feel about specific economic or monetary policy positions.

Policymakers will have to be sure the cure isn’t worse than the disease.  Tightening policy means, to some extent, slowing the economy, which means lost jobs.

That’s something that could also be reflected in consumers’ feelings about the economy next year, said Carola Binder, an economist at Haverford College who studies inflation.

“Reducing demand means fewer jobs,” she said. “For people that maintain their employment, they might be less impacted by higher interest rates, but there’ll be a portion of people who will lose their jobs, so they’ll definitely feel the effects.”

Still, it’s not clear whether the effects of that tightening will be felt more keenly than inflation. Some economists argue that it’s easier psychologically for consumers to deal with a sluggish job market than it is with high inflation.

“When the labor market tightens, you can look harder for a job,” Kirshner said. “But if you’re in the supermarket and prices are higher, there is nothing you can do about that, which can be very anxiety-inducing.”

In the meantime, some consumers are expected to “tighten their belts” in 2022 as inflation continues to be an issue, at least for several more months, according to Morning Consult economic analyst Kayla Bruun. This especially applies to older adults who are more likely to be retired and living on fixed incomes and don’t anticipate their wages rising along with inflation.

For younger consumers, meanwhile, there’s relatively less concern over inflation because they’re still likely to be in the workforce and have an expectation of future raises, Bruun said. Rising wages will leave them better equipped to keep up with rising prices compared to older adults.

“Wages are a lot stickier than prices,” she said. “Gasoline, groceries and goods like that are actually some of the things that are driving up inflation, and those are prices that do have the potential to come down.”

Related: Warning Sign for Democrats: Voters Across Parties Expect a Worsening Economy in the Next Year

Democrats are dealing with a lost ‘narrative’ on inflation

The party began 2021 with a trust advantage over Republicans among voters for their handling of the economy. In May and June, that trust gap narrowed and Republicans never looked back, holding an edge over Democrats on the economy ever since.

Since June, Voters Have Trusted Congressional Republicans More Than Democrats on the Economy

The effects of Biden’s public opinion downturn on the economy aren’t just playing out in a partisan fashion. Even in Biden’s own party, inflation is highlighting points of division among moderate and progressive wings.

For the past three months, the Bureau of Labor Statistics has released high numbers on the Consumer Price Index, one of the most visible and written-about measures of inflation. From October to December, 62 percent of voters said they blame Biden’s policies for the high figures.

Self-professed liberal Democratic voters are increasingly turning their ire toward the president’s policies. The share who hold the Biden administration’s policies responsible for inflation has risen to 41 percent from 34 percent between October and December.

Share of self-identified moderate and liberal Democratic voters who say they hold the Biden administration’s policies responsible for increasing inflation in the U.S. economy

Douglas Holtz-Eakin, president of the American Action Forum and former chief economist of the President’s Council of Economic Advisers under George W. Bush, said Biden, who campaigned as a moderate on promises of bipartisanship, was never considered “one of them” among the party’s progressives. That leaves Biden, who had the tenuous support of liberal voters after the election, vulnerable to public opinion shifts.

Now, with inflation, “he’s lost the narrative, even in the party’s strongest core,” he said.

When it comes to the election, Holtz-Eakin said the Fed’s announced moves are unlikely to result in major changes in voter sentiment, but any improvements or downturns in the economy from now until summer could have a huge impact.

“Somewhere around June or July, most people make a decision about what they feel about things,” he said. “It’s the performance of the economy in that moment that’s going to matter.”