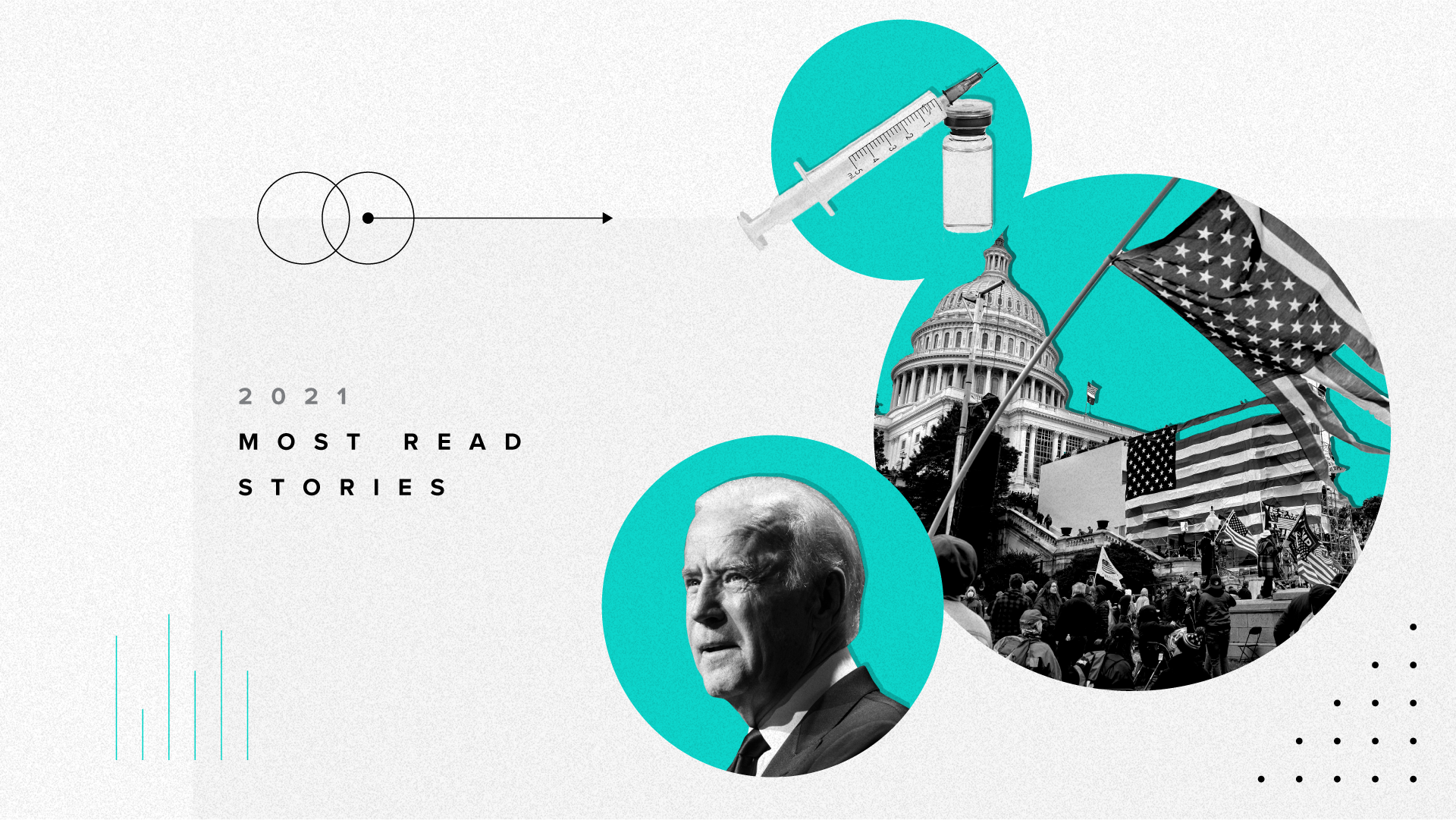 Eleven months ago, America looked forward to turning the page on the pandemic-dominated volatility of 2020, only to be immediately rocked by an insurrection in the first days of the new year. Two weeks later came a presidential inauguration. Fittingly, Morning Consult’s two most-read stories of 2021 were pieces that touched on those January milestones.

News of President Joe Biden’s first approval rating in office — which, at 56 percent, was higher than former President Donald Trump ever achieved in his four years in the White House — sparked the most reader interest this year. Not far behind, however, was the story of Trump’s sinking approval among Republicans in the aftermath of the Jan. 6 attack on the U.S. Capitol.

Political polling stories fared well across the board with readers, as did articles that addressed more policy-oriented debates in Washington. On the finance beat especially, public opinion pieces on lawmakers’ coronavirus stimulus and infrastructure negotiations dominated the year.

COVID-19’s impact was felt on every Morning Consult beat — especially in health, where a piece about the effect that Fox News personalities had on vaccine hesitancy among the channel’s viewers came out on top for the year.

In a sea of Meghan and Harry news, the entertainment story that resonated most with readers was about the impact — or lack thereof — that celebrity influencers had on vaccine willingness. In sports, the cryptocurrency and NFT boom garnered substantial interest — just not as much as a story on the comfort people felt in returning to normal activities like sporting events.

On the tech beat, a handful of stories related to Jan. 6 were noteworthy to readers, including one on the fallout of Trump’s ban from social media platforms and another on the post-riot beliefs of QAnon followers.

The brands beat, meanwhile, was led by a public opinion piece on the wildly unimportant debate over Potato Head (née Mr.), while readers of the energy vertical sought to zoom past 2021 to a future of electric vehicles and decommissioned coal sites.

Here’s a look at the top five most-read stories in 2021 from each of Morning Consult’s verticals:

Related: Analyzing the News That Broke Through in 2021

3) Why Vermont’s Phil Scott, the Country’s Most Popular Governor, May Be Resisting the GOP’s Calls to the Senate

1) Hasbro’s Decision to Drop the ‘Mr.’ From Its Potato Head Brand Proves Unpopular

5) Influencers Are the New Travel Agents for Millennials, Generation Z

1) As EV Startups Enter the Market, They Say Dealerships — and a Decades-Old Legal Structure — Stand in Their Way

3) A New Frontier for Nuclear: Partnering With Utilities on Decommissioned Coal Sites

4) Amid Push to Replace Natural Gas, Public Is Split on Whether to Electrify Their Homes

Related: The Coming Electric Vehicle Wave: In 2022, Consumers Get Options

2) Ahead of Oprah’s Interview, How Prince Harry and Meghan Markle’s Popularity Compares With That of Other Royals

1) With Congressional Stimulus Fight Looming, 76% of Voters Back $1.9 Trillion Plan, Including 60% of Republicans

Related: Economists Say 2022 Is the Year of Inflation. Can the Public and Policymakers Get on the Same Page?

3) The Vaccine Holdouts: Who They Are and What’s Fueling Their Opposition

4) About 7 in 10 Voters Favor a Public Health Insurance Option. Medicare for All Remains Polarizing

Related: Clinical Trials Are Slow and Expensive. Industry Leaders Want That to Change in 2022

1) Many Vaccinated Americans Are Still Uncomfortable Returning to Public Activities. The U.S. Economy Needs Them

2) After Moving All-Star Game, MLB Becomes Latest League to Fall Out of Favor With Republicans

3) Beyond Gen Z: What the Parents of Generation Alpha Say About Their Kids’ Interest in Sports

4) Millennials, Not Gen Zers, Are Driving the Recent Physical and Digital Collectibles Boom

5) Sports Fans Are Into Cryptocurrency, and Brands Are Capitalizing

Related: NBA, NHL Attendance Lags Behind Pre-Pandemic Pace — And Might Get Worse Before It Gets Better

1) Most Liberal, Conservative Social Media Users Want Platforms That Cater to All. Many of Their Account Sign-Ups Indicate Something Else

2) Nearly Half the Public Wants the U.S. to Maintain Its Space Dominance. Appetite for Space Exploration Is a Different Story

4) Facebook’s Whistleblower Said the Company Does Too Little to Protect Users. Most of the Public Agrees

5) States Are Moving on Privacy Bills. Over 4 in 5 Voters Want Congress to Prioritize Protection of Online Data

Related: Lawmakers See 2022 as the Year to Rein in Social Media. Others Worry Politics Will Get in the Way
Coronavirus Financial Regulation Jan. 6 Joe Biden Pandemic Impact Vaccines