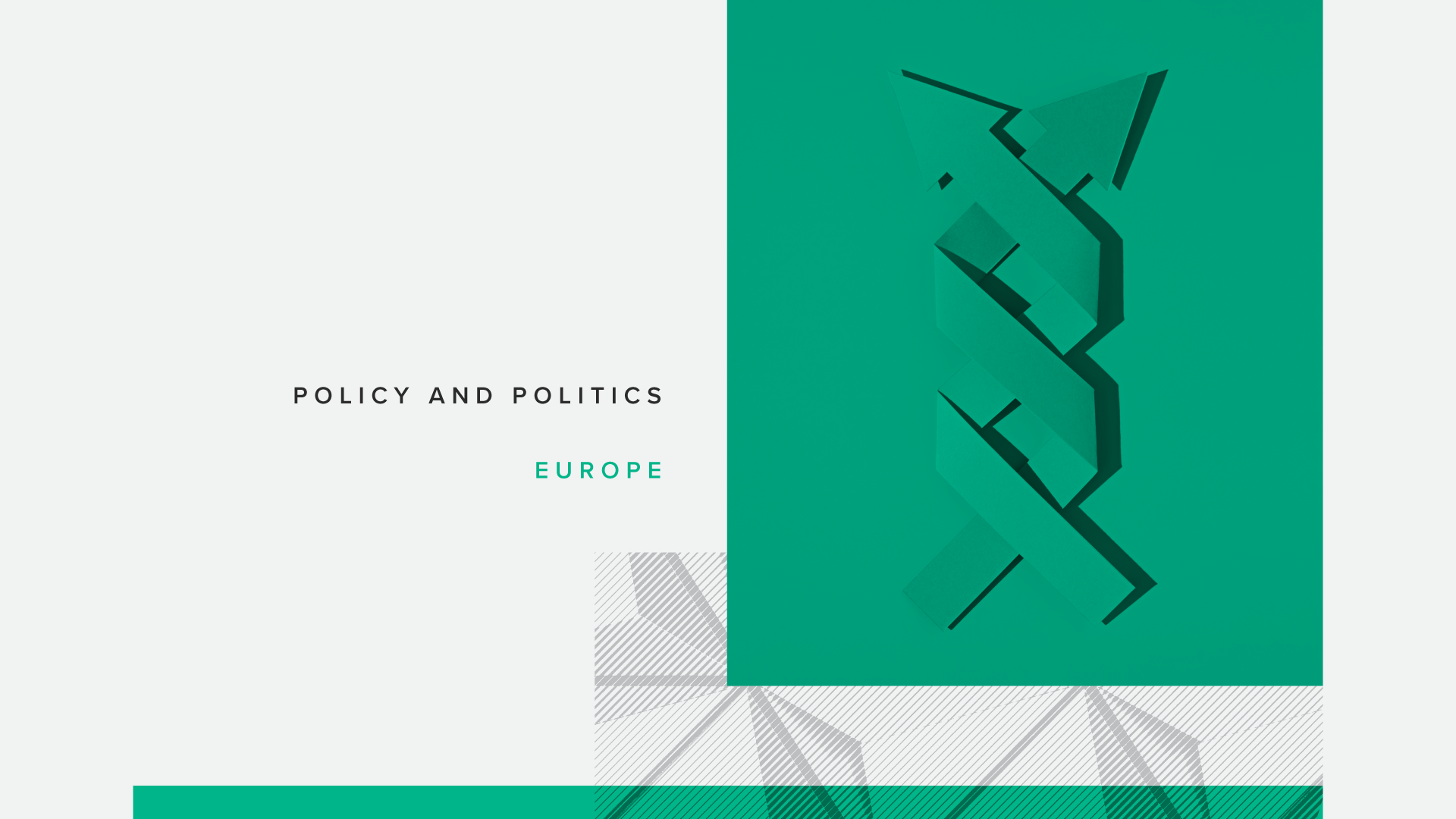 European policymakers are at a crossroads as geopolitical tensions compound economic concerns. While the E.U. reached its pre-pandemic GDP level in the fourth quarter of 2021, policymakers are withdrawing support as economic growth faces mounting headwinds in the form of weakened consumer sentiment, severe supply constraints and rising prices. A sharp spike in energy prices lies at the heart of Europe’s inflation — currently the highest in decades — and Russia-Ukraine tensions threaten to drive prices even higher.

Consumer sentiment has been stagnant or declining in much of Europe since September 2021, as once-hopeful consumers have faced the one-two punch of delta- and omicron-driven COVID-19 case surges. Supply chain crunches have also driven up prices and made some items more difficult to find. 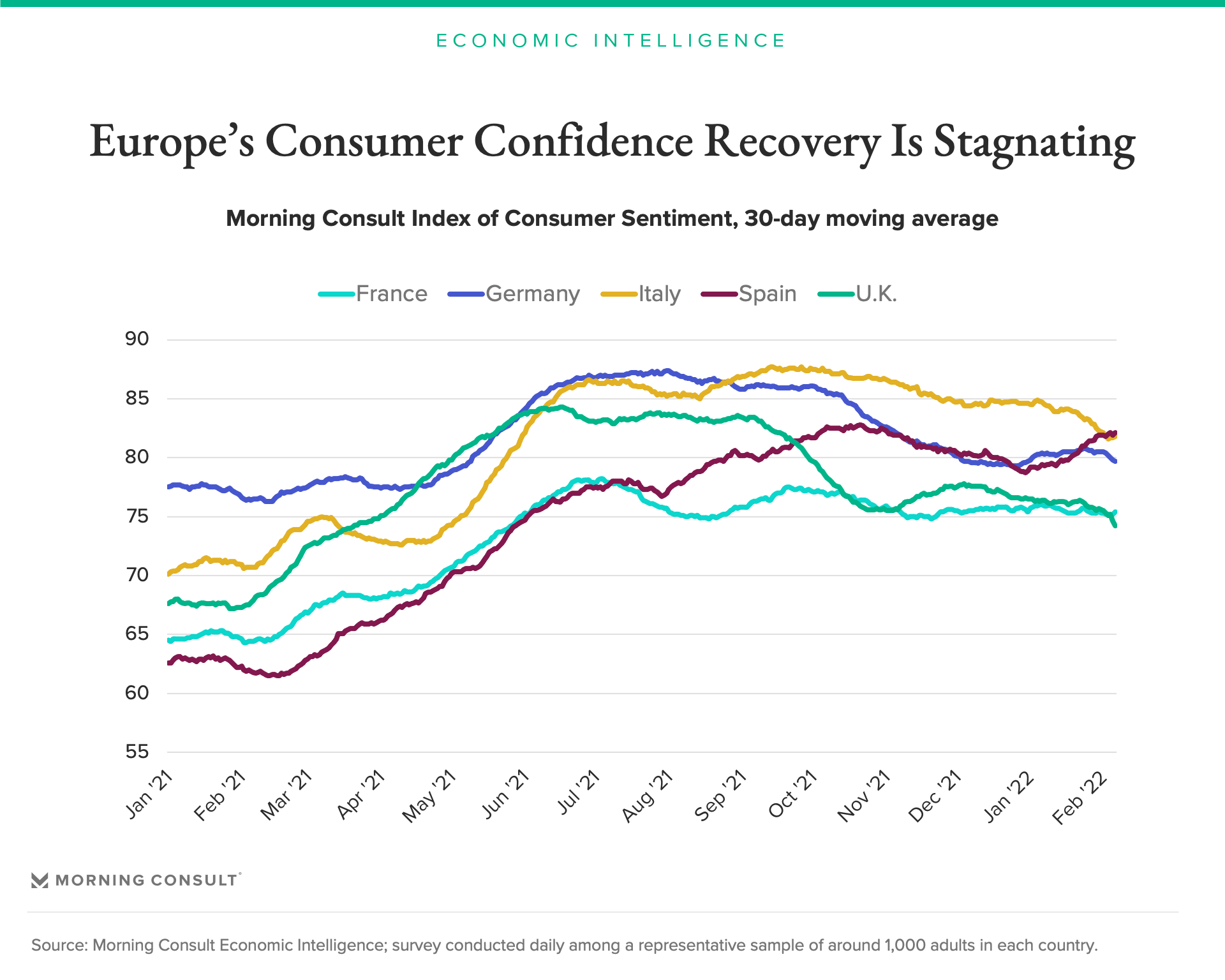 Consumer sentiment in Germany, Italy and the U.K. is now more than 6 percentage points below pandemic-era highs, and declining confidence has dampened commerce. Consumer spending has declined in Germany in recent months, and this plus weaker manufacturing output led the German economy to contract by 0.7 percentage points in the fourth quarter of 2021.

Along with COVID-19, rising prices are undermining confidence and growth, with energy prices largely behind the spike in inflation. In the second half of 2021, natural gas prices in Europe roughly tripled, with the direct impact of rising energy prices contributing to over half of the eurozone’s 5.1 percent headline inflation in January. Consumers are seeing their bills become more expensive, and expectations of continued price increases have risen with them. The share of respondents saying that they expect energy and utility price increases in Morning Consult’s monthly surveys has trended higher over the course of 2021 and into this year. For example, in January 2022, 88 percent of Italian adults expected their energy and utility bills to increase over the next 12 months, up 23 percentage points from February 2021. 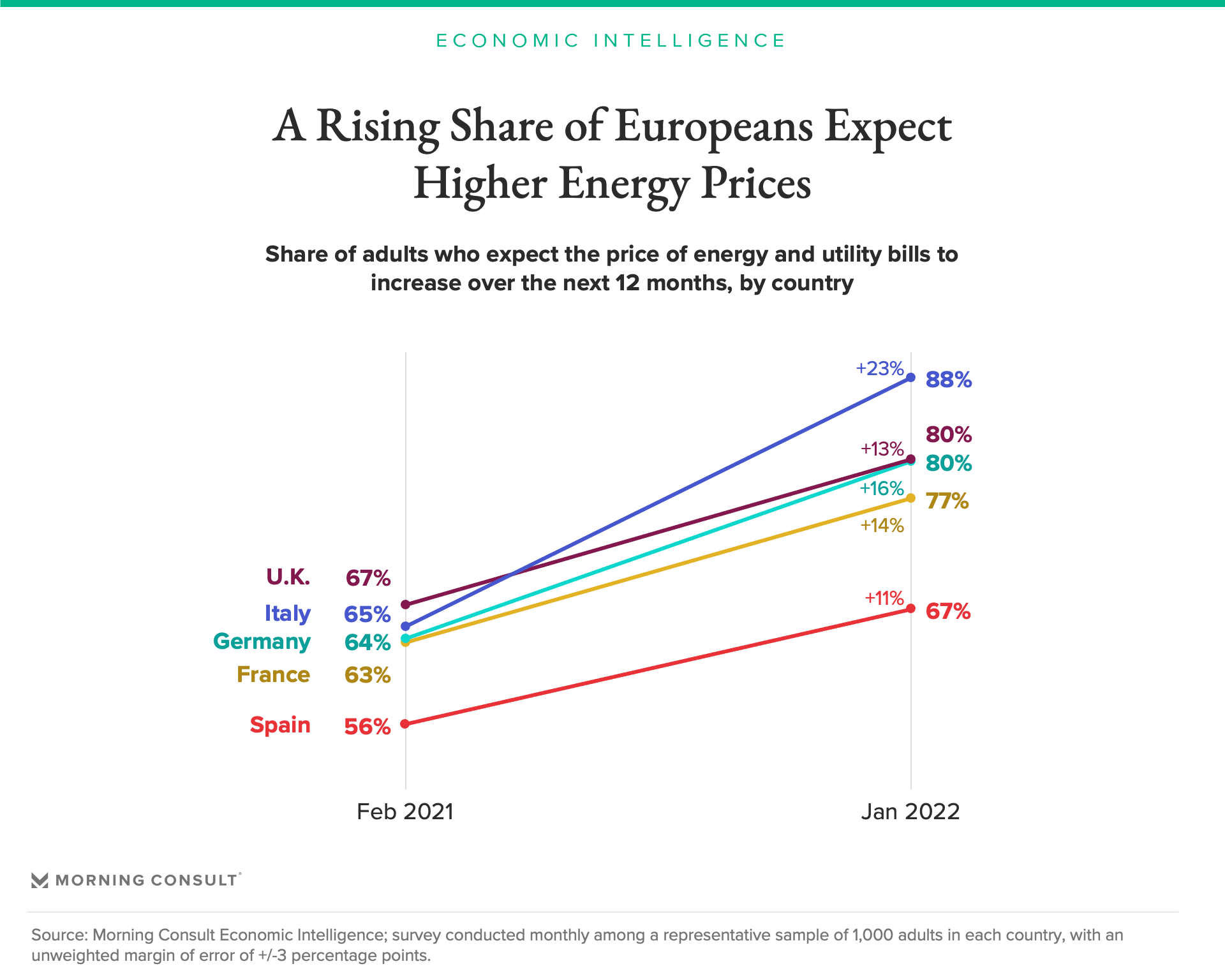 Geopolitical tensions are also threatening to drive up energy prices and drag headline inflation with them. The European electricity grid has faced myriad challenges in recent months, adding to the increase in prices and making the system even more reliant on imported natural gas, especially from Russia. According to data from the European Union Agency for the Cooperation of Energy Regulators, 49 percent of Germany’s gas supply came from Russia in 2020, along with 46 percent of Italy’s and 24 percent of France’s. Now, Russia-Ukraine tensions are threatening to disrupt that supply, and consumers in Germany and Italy — both heavily reliant on Russian fuel — are seeing the biggest increases in expectations of higher utility bills.

Rising input prices are already being passed on to consumers, with bills rising across Europe. Regulators in the U.K. announced this month that they would increase Britain’s energy price cap by a record-breaking 54% in April. Even before the announced hike, British consumers were already being impacted by rising prices. The share who said they weren’t sure if they’d be able to pay their water, gas or electricity bill increased from 12 percent in December to 17 percent in January. 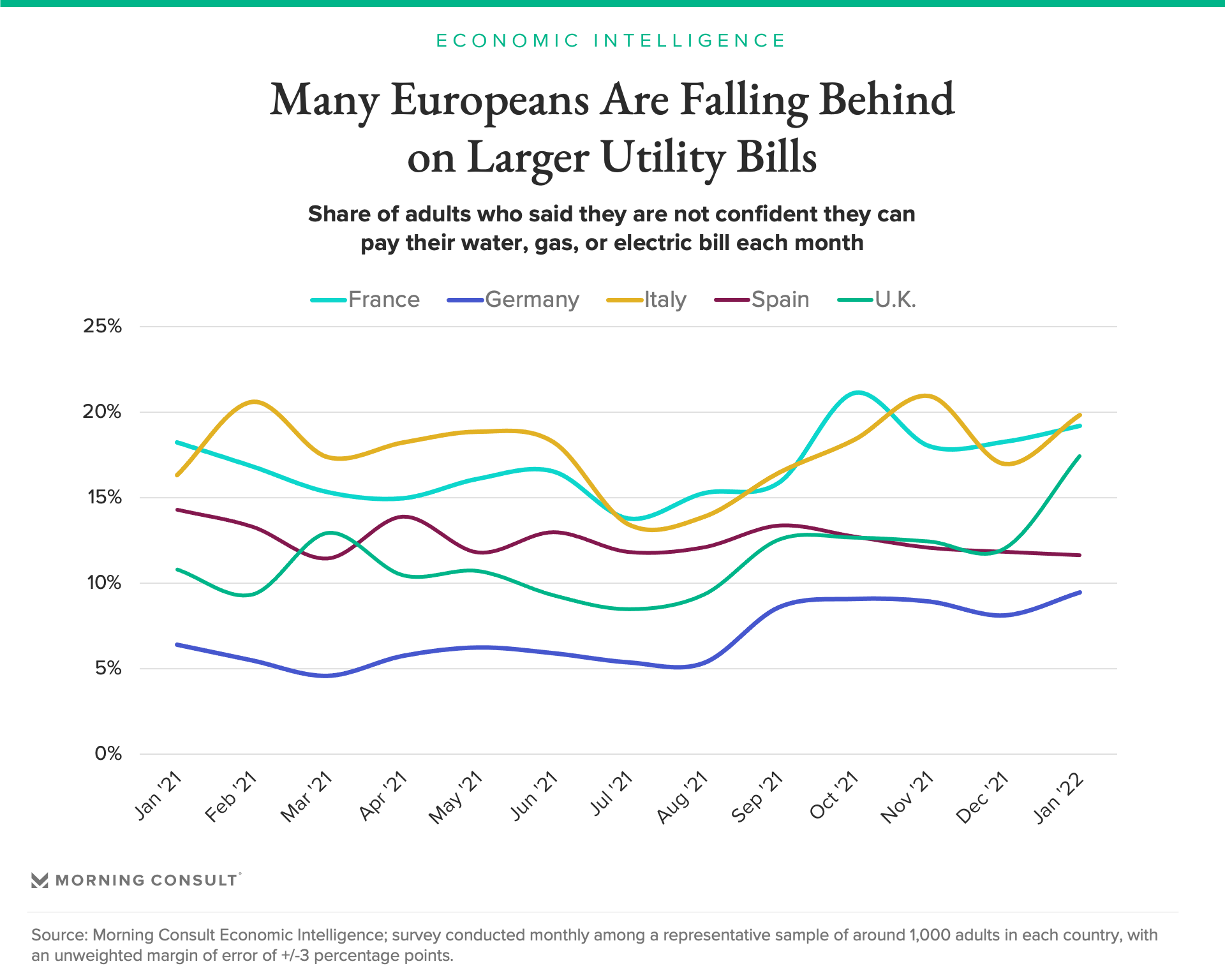 High energy prices and limited supply will make the European economy especially vulnerable to any additional energy shocks, exacerbating the repercussions of current geopolitical tensions. While monetary policymakers would typically look past a spike in energy prices, Christine Lagarde, the president of the European Central Bank, has noted “geopolitical clouds” over Europe and their potential impact on prices. With anticipated higher energy prices potentially feeding into broader price increases and inflation expectations, the central bank could move sooner to conclude its asset purchases and tighten monetary policy.

Political pressures will also mount on the ECB to rein in rising prices, and the impact on the most vulnerable people who are struggling to pay their bills will be difficult to ignore. While European policymakers are currently dialing back pandemic-era support on the fiscal side, an escalation of the Russia-Ukraine conflict could lead to a policy shift, with additional energy price shocks resulting in targeted energy subsidies, or more, to dampen the economic and political impact.

The Morning Consult data from this analysis draws on two survey instruments. The consumer confidence data comes from daily consumer confidence surveys that measure consumers’ views of their personal finances, business conditions in the country as a whole, and current buying conditions. The price expectations and payment confidence data reflects the results of monthly surveys of 1,000 respondents per country. The survey includes questions regarding spending and inflation expectations as well as views of broader geopolitical and social risks. The survey began January 2021, with some additions and edits occurring in February 2021.