Americans Support Sanctions Against Russia — Even if It Means Higher Prices

A solid plurality of U.S. voters say they’re willing to face higher prices at home in order to sanction Moscow for invading Ukraine — and fewer than 1 in 10 oppose any sanctions 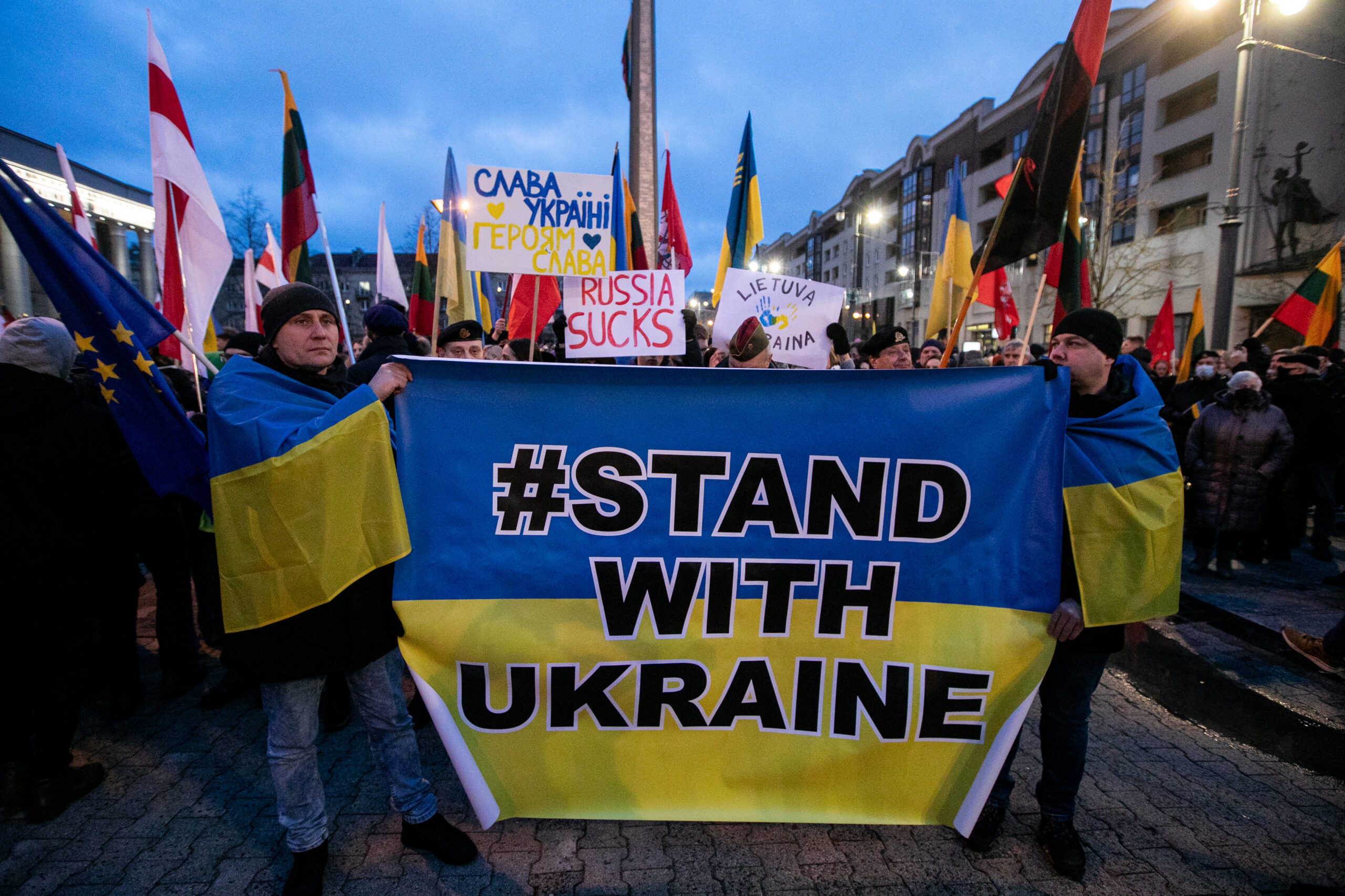 Protesters hold flags and posters in support of Ukraine during a protest against Russia's invasion, near the Lithuanian Parliament in Vilnius on Feb. 24. (Paulius Peleckis/Getty Images)
By Matthew Kendrick

As President Joe Biden walks a tightrope of formulating a tough response amid already surging inflation at home, nearly half of U.S. voters surveyed by Morning Consult following Russia’s invasion of Ukraine support sanctions against Moscow even if it leads to increased prices. Only 7 percent of voters, meanwhile, say they are opposed to sanctions in any case.

More voters approve than disapprove of how Biden is handling the Ukraine crisis, as more than 4 in 5 Americans blame Russian President Vladimir Putin for escalating the crisis into a full invasion. But an overwhelming majority is also now concerned about a military conflict between Russia and the United States, and only 19 percent of voters prefer direct U.S. military aid to Ukraine as America’s primary response to the situation. 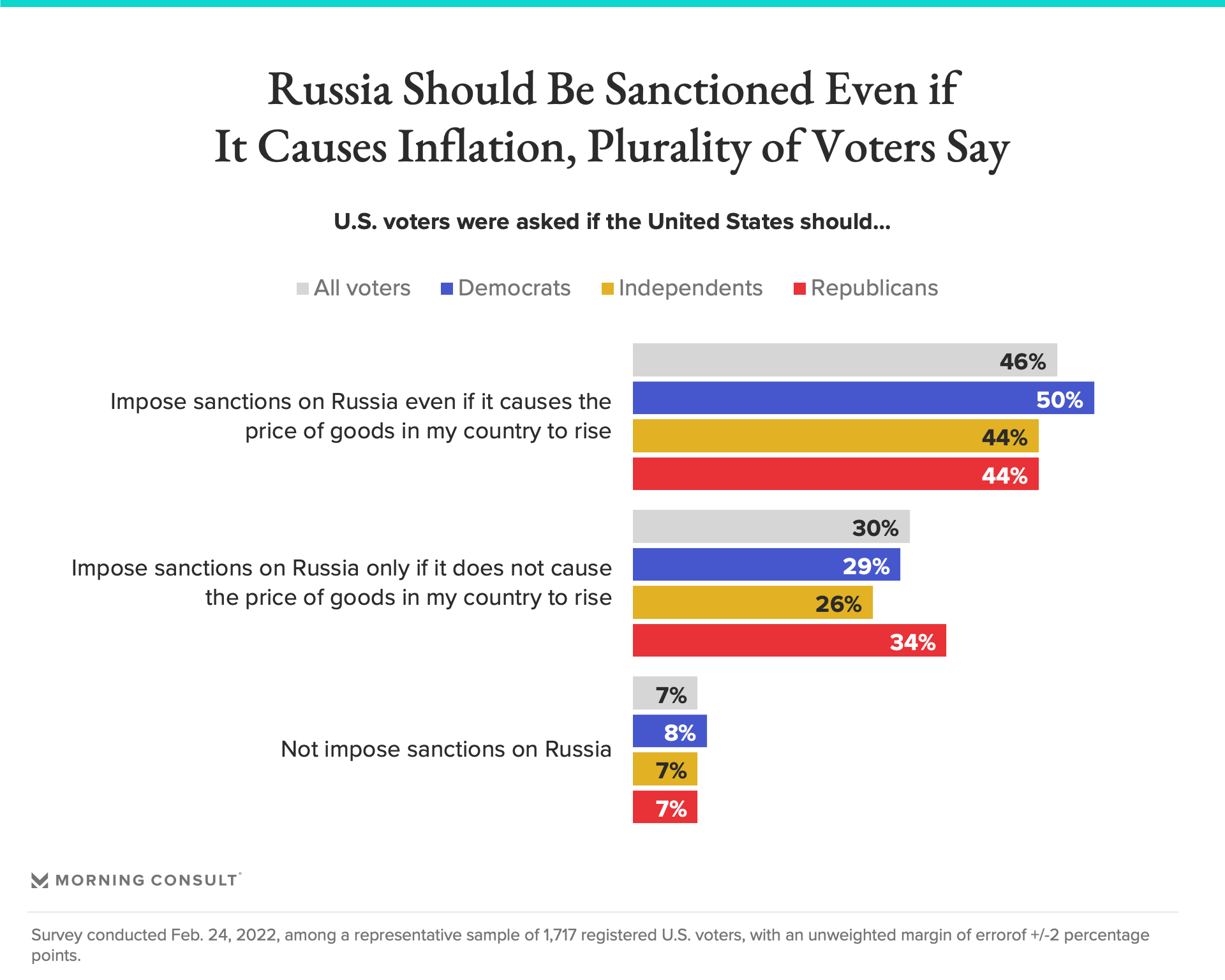 As much as Americans appear ready to apply financial pressure to Moscow, they are clearly nervous about escalating the crisis with Russia further, with about 4 in 5 voters saying they were concerned about a military conflict with Moscow now developing. And when presented with three options — diplomacy, sanctions or direct military support — as the primary U.S. response to the situation, just 19 percent backed the most bellicose approach. Most voters (55 percent) also approved of Biden’s decision not to send U.S. troops to rescue Americans who did not evacuate Ukraine prior to Russia’s invasion, which he said could trigger a “world war. 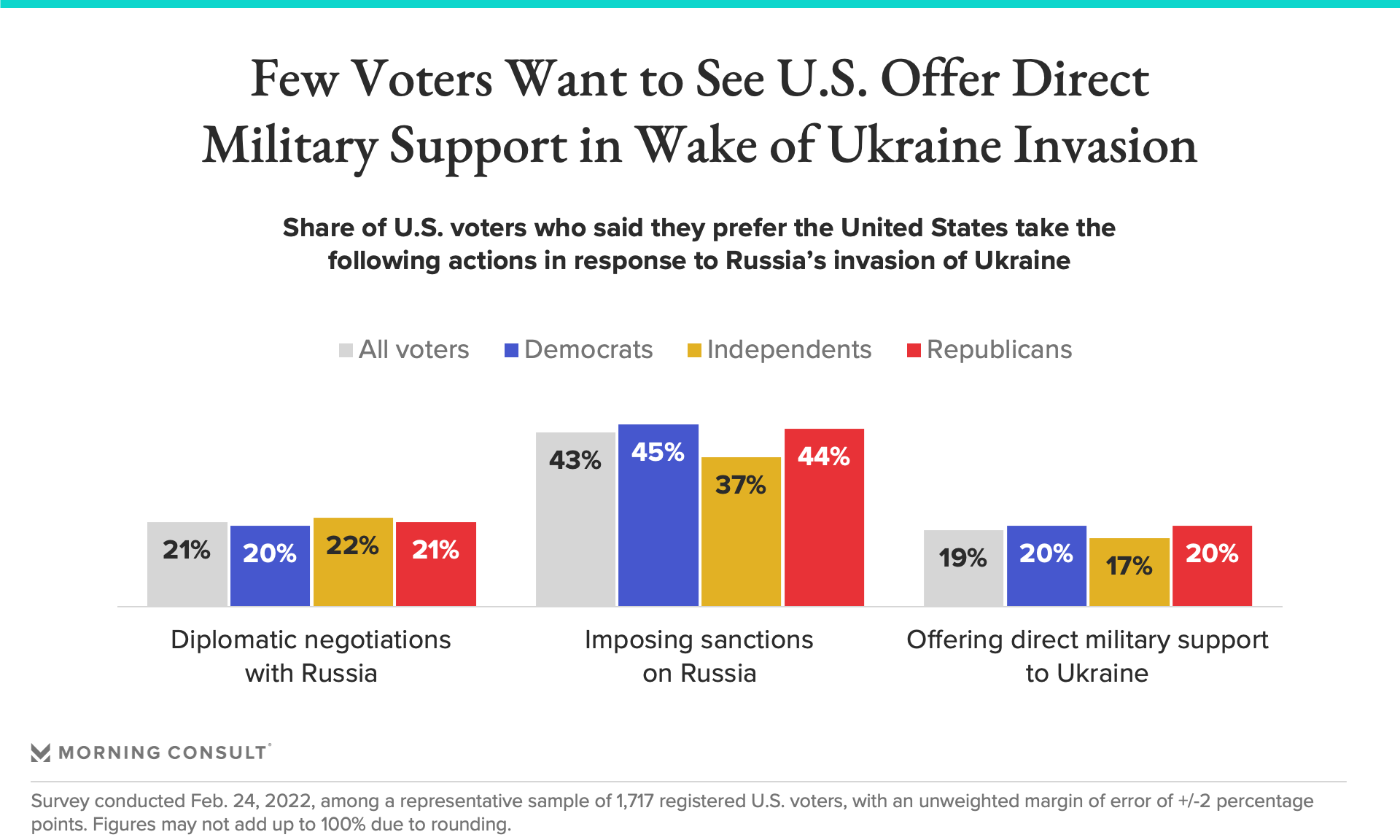 With nuclear armageddon on the line, it seems voters find discretion is the better part of valor.

Americans are not ignoring the crisis, though: 86 percent report hearing “a lot” or “some” about the invasion and 43 percent successfully identified Ukraine on a blank map of Europe, up 9 percentage points from a similar test conducted earlier this month. And as U.S. troops in Poland scramble to help local authorities process fleeing Ukrainians, two-thirds of voters agreed that the United States has an obligation to help refugees displaced during humanitarian crises.

The latest survey was conducted Feb. 24, 2022, among a representative sample of 1,717 registered U.S. voters, with an unweighted margin of error of plus or minus 2 points.