The British are more likely to say their country has a responsibility to protect Ukraine and back assertive sanctions and aid to Kyiv than their German, French and American peers 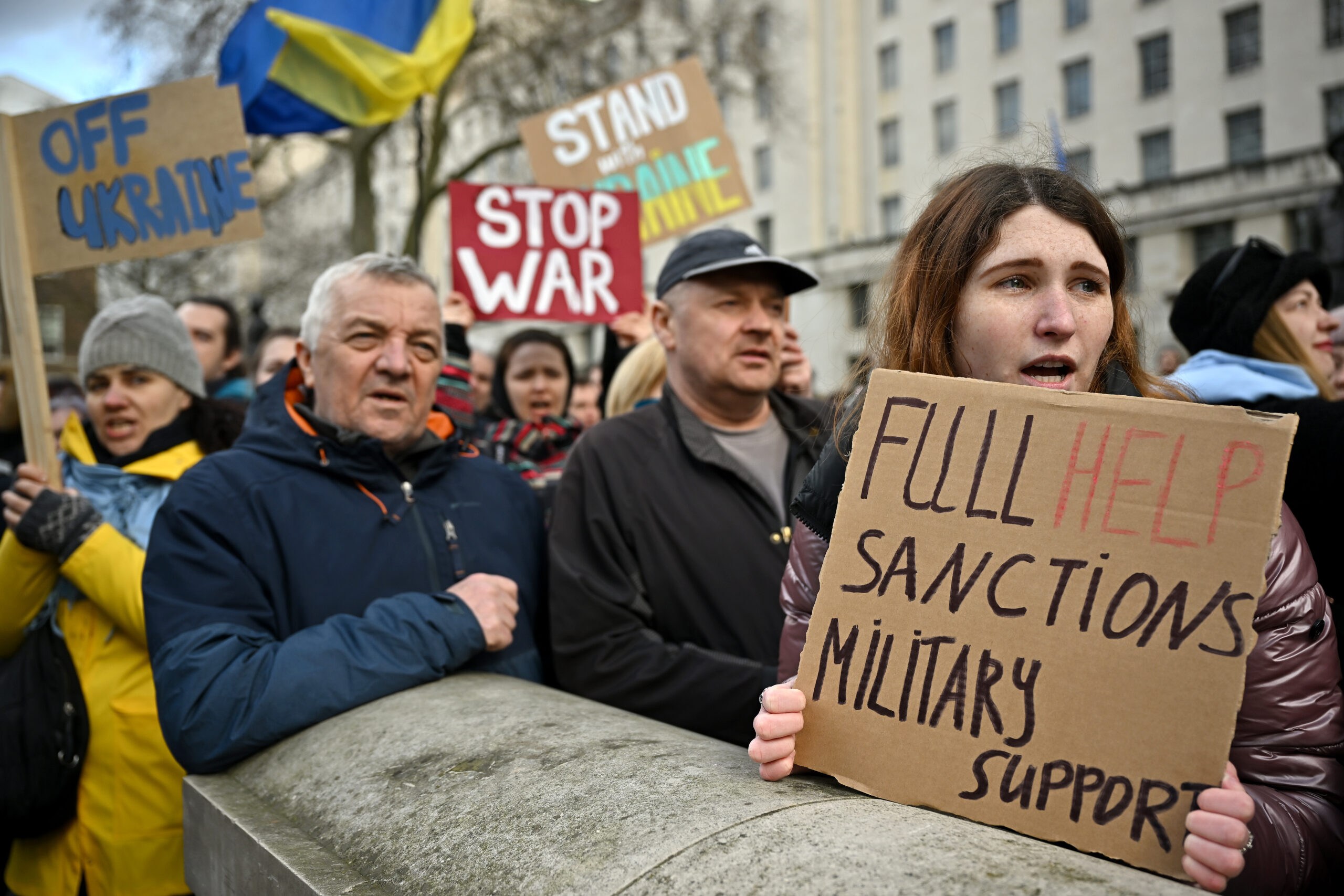 Ukrainians demonstrate against the recent Russian invasion of Ukraine in London on Feb. 24. (Jeff J Mitchell/Getty Images)
By Matthew Kendrick

Russia’s invasion of Ukraine represents its latest test of the resolve of the West’s most influential nations, and new surveys show it’s the British who are most likely to say their country has a responsibility to protect Ukraine from President Vladimir Putin. However, large numbers in each of the four major NATO countries still support punishing Russia, including via suspending its access to the international SWIFT banking system. 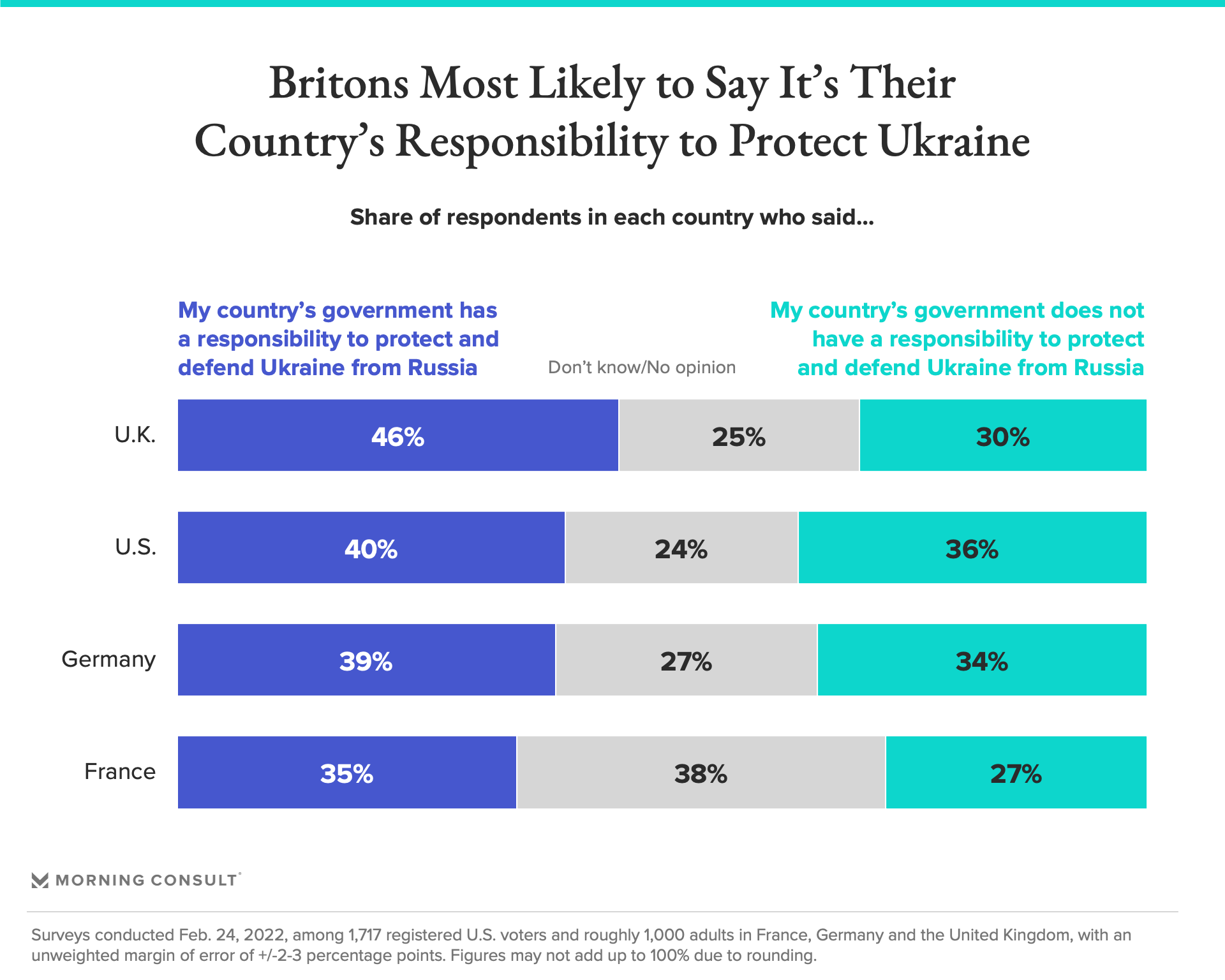 The West’s response to Russia’s invasion of Ukraine does not yet include one of the most biting provisions brought up over the preceding weeks: the expulsion of Russia from the SWIFT banking system that facilitates global trade and financial flows. Armed with a Kalashnikov carbine, former Ukrainian President Petro Poroshenko on Friday said Russian President Vladimir Putin had “declared a war to the whole world” by invading Ukraine and issued a plea for the West to cut Russia out of the world financial system in response. Clear majorities in the United States, United Kingdom and Germany say they now support such a move, as do nearly half of the French. 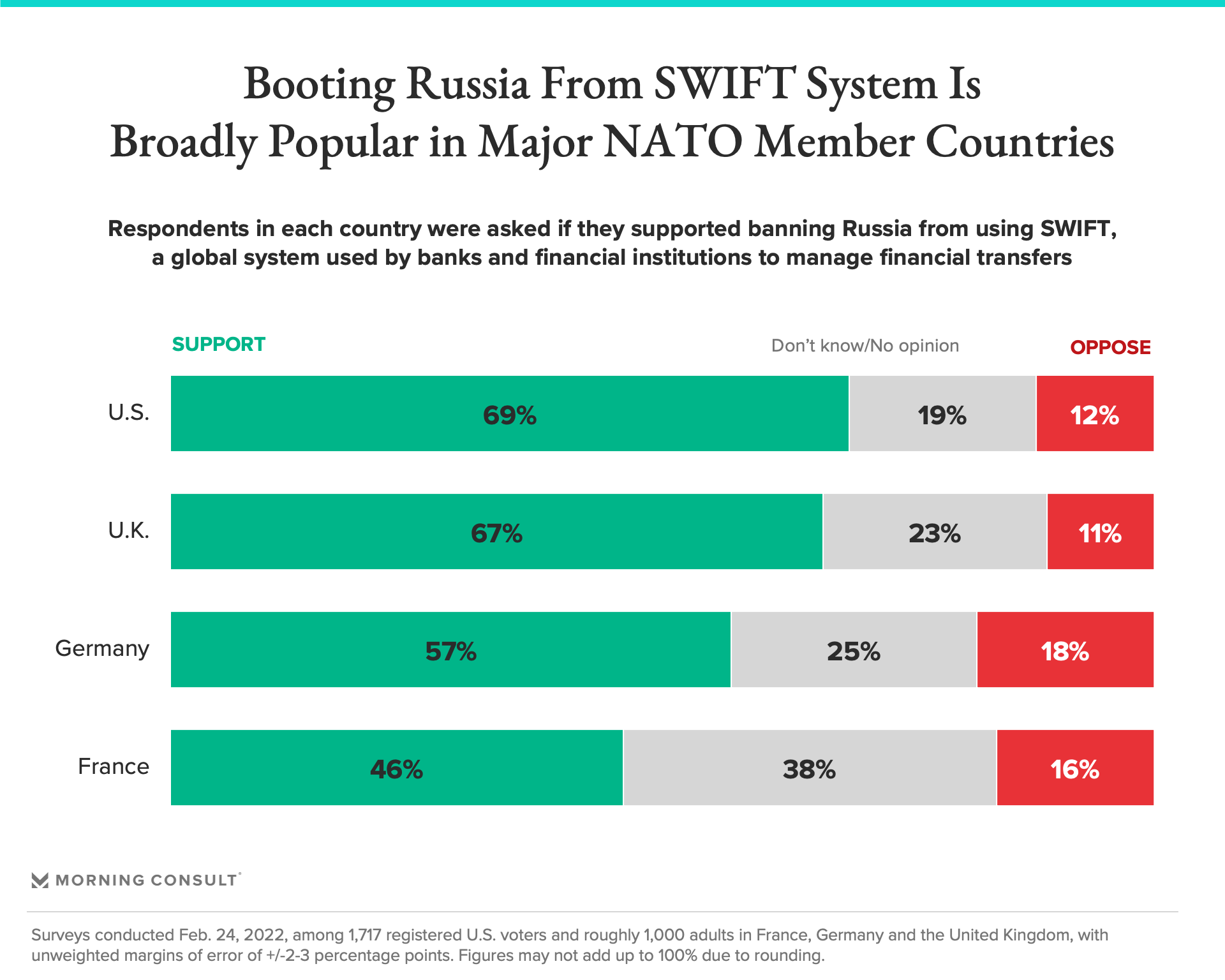 However, cutting Russian banks out of the SWIFT system would create obstacles for European creditors hoping to collect on an estimated $30 billion of loans issued in Russia and encourage more nondollar denominated trade, and U.S. President Joe Biden has said NATO member countries in Europe oppose the move for now. Strategic considerations may also be at play, with allies looking to reserve their most powerful sanctions for later.

British Prime Minister Boris Johnson has supported the move, though, and has shown little hesitation in stepping out ahead of the pack by unilaterally slapping sanctions on key figures and institutions in Russia and closing an immigration loophole utilized by wealthy Russians. The British public appears the most ready to take the fight to Russia, with 40 percent favoring dispatching both troops and weapons to Ukraine over just sending weapons or sending no support  — the highest among all four countries and nearly double the number in Germany.