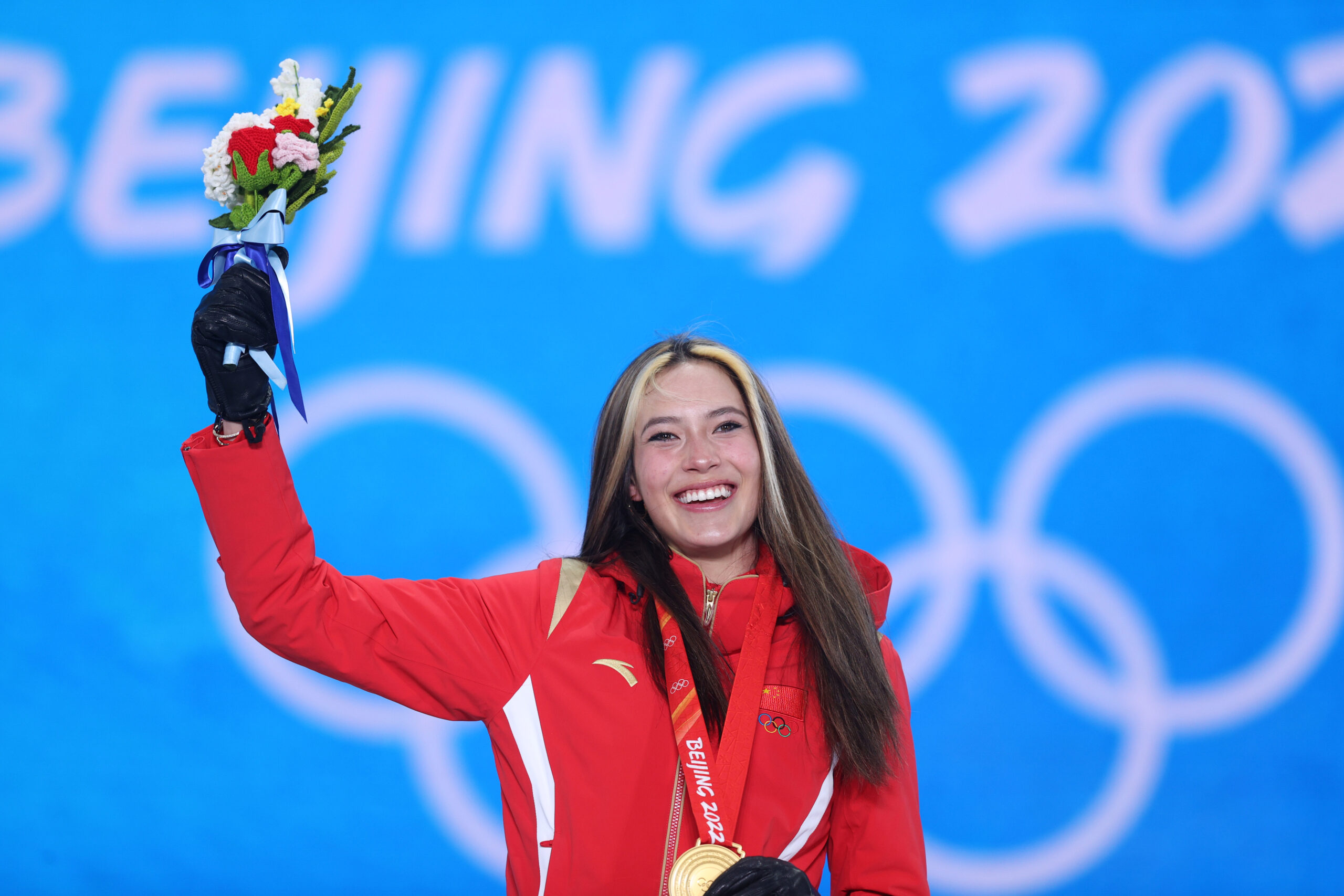 Eileen Gu of Team China poses with her gold medal after winning the women's freeski halfpipe event at the Beijing Winter Olympic Games on Feb. 18, 2022 in Zhangjiakou, China. Seventy-one percent of Chinese adults said they would be interested in purchasing products endorsed by Gu, according to a Morning Consult survey. (Ezra Shaw/Getty Images)
By Alex Silverman

Commercial expectations for the Beijing Olympics were modest in the months ahead of the Games. They lacked American star power, and the competition was largely overshadowed by geopolitical conflict, human rights abuses and COVID-19 restrictions.

With all of these factors working against Beijing 2022, combined with the disappointing viewership for the Tokyo Summer Games just six months prior, it came as little surprise that this year’s Games were the least-watched since NBC started broadcasting the Olympics in 1988. Still, Morning Consult’s analysis of post-Games survey results and third-party viewership data offers valuable takeaways as the industry turns its eyes to Paris 2024.

Despite the Beijing Games being the least-viewed Olympics on record, NBC brass said viewership was about what they expected. The rate of decline from last summer’s Tokyo Games was almost the same as the drop-off for the 2018 Winter Games in Pyeongchang compared to the 2016 Summer Games in Rio de Janeiro. And this year’s Winter Games in Beijing had the unique obstacle of occurring only six months after the most recent Summer Games, perhaps leading to some Olympic fatigue among would-be viewers.

In Morning Consult’s post-Games survey, 29 percent of Americans said they watched “a lot” or “some” of the Beijing Games, a 26 percent decrease from the 39 percent who said the same of the Tokyo Games last summer.

The Morning Consult survey data shows that while Gen Zers tuned in at about the same rate as Gen Xers and baby boomers, the rate of decline between the two Games was much greater among the youngest cohort. The 27 percent of Gen Z adults who said they watched “a lot” or “some” of the Winter Games was down 36 percent from the share of Gen Zers who said they tuned into the Tokyo Games. By comparison, viewership from Tokyo was down 26 percent among millennials, 25 percent among baby boomers and 22 percent among Gen Xers.

Geographically, the decline in viewership between the 2021 Summer Games and 2022 Winter Games was most significant in the South, where the share of Americans who said they tuned in to at least “some” of the Games fell by 39 percent. By comparison, self-reported viewership fell 27 percent in the Midwest, 16 percent in the Northeast and 5 percent in the West.

And while Democrats were more likely than Republicans to watch the Beijing Olympics, the decline in viewership between the Tokyo and Beijing Games was higher among Democrats (23 percent) than among Republicans (10 percent). While polling prior to the Games suggested Republicans were more likely than Democrats to sit out these Games based on concern about them being held in China, the Beijing Games also featured less conversation about athlete protests pertaining to domestic social causes (such as racial and economic inequality) that Republicans have pointed to as a turnoff.

Eileen Gu is China’s “It” girl

How famous is Chinese-American freeskier Eileen Gu in China? Think Tom Brady in the United States. In a Morning Consult survey of nearly 1,000 Chinese adults conducted last month, 91 percent of respondents indicated they had heard of Gu, the same as the share of Americans who said in a January survey that they had heard of Brady.

It’s easy to see why major brands would pay top dollar for Gu to promote their products to Chinese consumers. In the survey, 71 percent of Chinese adults and 78 percent of Chinese women said they would be interested in purchasing products endorsed by Gu.

Bryce Whitwam, a Shanghai-based marketing executive and adjunct professor at New York University, attributed Gu’s branding power to “her generated awareness around the buzz of her success, China’s promotion of the Winter Olympics, combined with the Chinese consumer’s natural trust in celebrities to influence purchases.”

The Beijing Games were largely bereft of big-name American stars with the profile to attract large audiences to a particular event. In a Morning Consult survey prior to the Games, snowboarder Shaun White was the only U.S. athlete with whom more than half of Americans were familiar. That remains the case even after the Games, and White is now retired.

Survey conducted Feb. 23, 2022, among a representative sample of 2,201 U.S. adults, with an unweighted margin of error of 2 percentage points.

While no member of Team USA became a household name, figure skater Nathan Chen, who won one gold and one silver medal in Beijing, achieved the largest boost in awareness and favorability among the American public. In the post-Games survey, 40 percent of Americans indicated they have heard of Chen, up from 27 percent prior to the Games. The 48 percent increase put his awareness on par with that of snowboarder Chloe Kim. One in 4 U.S. adults said they have a favorable opinion of Chen following the Games, up from 15 percent before the Games.